With the growing craze of Vikings, thanks to the TV Shows. It was only a matter of time that a game circled that era had to be made. Fingers pointed to Ubisoft, given their history, that they make games, which are always set in some sort of significant period.

As you would have anticipated, the game with an authentic portrayal of Viking has been made, and I think Ubisoft has once again nailed it. When Valhalla was first announced, I arrogantly thought Odyssey would remain the long-lasting king of Assassin’s Creed games but seeing some nail-biting goodness in this one. I can’t look back.

Assassin’s Creed Valhalla is set in the merciless Viking era when dozens of clans raided England. During this period, one of the clans is the Ravens, In which our character Eivor holds an influential role. The game starts with a high level of psychological-emotional trauma that eventually grows such level of vengeance in your character that you will be hooked right off the start. Eivor comes from a noble and respectful family. The game does specify that Eivor is a special one right from the beginning, but he isn’t an Assassin, which I think matters a lot. Unlike the starting Assasin’s Creed games, where our character is already emphasized to be an Assassin. In Valhalla, you will separately join the Assassins brotherhood. Once you do that, you will already get the feeling of earlier Assassin’s Creed games. The iconic hidden blade is there, and even the appearance shares a lot of similarities.

“It is not about worth, Eivor. It is a matter of devotion to our creed.”

We had already predicted the assassins’ part, given that Ubisoft’s new strategy to make Assassin’s Creed Games revolve around dynamic open-world meta. The entire story of Assassin’s Creed Valhalla is quite long. If my estimate is right, it can take up to 50 hours to complete. The main story Isn’t that long, but luckily side quests play an essential role, as they contribute to the main development. My thoughts on the story are that; it’s very compelling. All missions feel unique; every time, there is a new level of outcome.

When the first Assassin’s Creed Valhalla trailer was announced, it had everybody excited, mainly because ships were back, and there was a vibe of the iconic Black Flag. I, too, was excited and playing the game. It becomes clear that ships are a crucial part of the story. The means of transport are well balanced. At the start, it does feel it’s a bit slow because you travel to random islands. However, as you progress later, it becomes effortless, thanks to fast travel availability at all places. Other than that, a horse is always ready at your disposal. The physics of horses aren’t that impressive. I wished Ubisoft would have done what Rockstar did with Red Dead Redemption 2. The horse would automatically stop in nearby edges. It feels a bit clunky in Valhalla because the horse is always going through the most unlikely passages.

One of the most growing concerns in recent times is side quests. Well, I regret to say, it’s still there, but fundamentally reduced. There are still dozens of side quests scattered all over the map. Often, you will be saving poor peasants, but other times it’s fun, as you will find legendary creatures and sacred tales. On the off chance that you’re not especially keen on 100% completion, most of the side quests can be ignored.

The pace of Valhalla is what I liked the most. Every mission, there isn’t any overly extended longevity that would make you bored. The majority of tasks emerge from plannings and conversations; in this manner, they are enjoyable to play. Like Odyssey, Valhalla also features on-screen clues. This was a bit frustrating in one mission because I wasn’t able to discover the target.

Nonetheless, I learned to detect the objectives through eivor’s raven “Synin” and the prominent “Odin’s sight.” The consequence of such a fast-paced story was the lack of focus on character development. I really felt that I only knew the personality of one major character in the game. The rest were also were interesting, but the game didn’t offer a lot about them.

The environment and map are all about landlords, retaliation, and morality. Initially, one cannot notice if the map is more prominent than the Odyssey. That is undoubted because it is different in its ways. The map is vast and diverse, filled with glamour forests and war-ravaged castles. The environment feels lively; cities are filled with joy; people are laughing all over the place. You will also find some NPC’s looking to play Orlog, and other times, merchants trash talking.

“As in the promise of glory. But the act of leaving so beloved a home, there is a sadness to it.”

Narrative linearity, accents, and cinematics, like all other Ubisoft games, are exceptional. I did notice that in starting missions, cinematics was a bit inconsistent, with those odd movements not syncing well with the narrative. Nonetheless, it was too minor, so I’ll give it a pass.

Wrong Decisions In Assassin’s Creed Valhalla can haunt you for the rest of the game. You will have to be critical and analyze whatever propositions are put in front of you. Sometimes, the decisions are so hard to make that I had to pause the game on two occasions and think for a couple of minutes. In most cases, it’s more about family and your personnel motives to continue expansion. Even At the start of the game, a couple of wrong decisions and expect the story to be flipped upside down.

“I did not. And for that, my anger burns hotter than any man’s here. But I will not let that drive me into despair.”

Even though I haven’t finished the game, I already want to start all over again and experience the result of the contrary choice. The last time I had these vibes were in 2015, playing The Witcher 3: Wild Hunt. 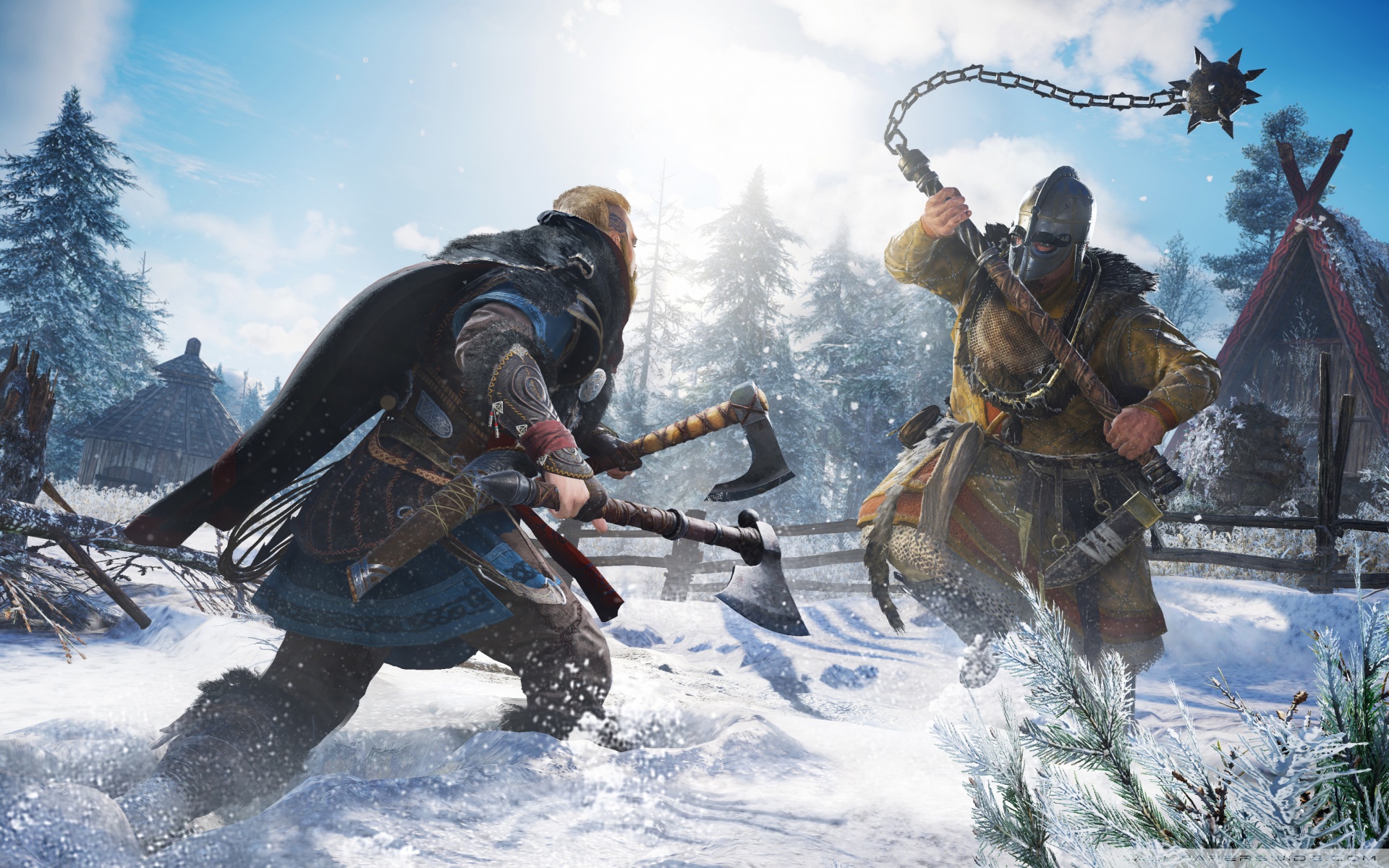 As you would have seen in TV Series and heard from books. Combat In Valhalla in merciless, ceaseless, and about as vigorous you can imagine. In the beginning, when you have only unlocked a few items and skills. The combat looks repetitive and boring. But as you progress, unlock new swords and lethal skills. It becomes delightful and satisfying. There is a lot of versatility to it; you can use different tactics, like shield and sword or double axes.

“I fought as I did, as hard as I did, to survive. For I Know what awaits us in the end.”

Besides, it’s also a bit competitive. I initially thought of setting the difficulty to medium but later settled at easy. The stealth and assassin part of the game isn’t that significant in Valhalla. In some missions, you would imagine that you can finish it in pure stealth. However, the objectives are so plausible that you will have to put an end to it. Combat cinematics is terrific, though. There are countless finishing moves, assassination techniques, and brilliant camera work covering heads and throats getting smashed in the middle. Here is a picture to give you a rough idea.

In the beginning, I was very confident that my hardware would do well. That is to say, I’m using a GeForce GTX 1080 Ti with Ryzen 3600x at 1080p resolution. Recommended settings were ultra but later changed them to high so that I could hit 60 fps. The overall optimization is average. Nvidia hasn’t released game ready drivers for the game, so potential improvements are also possible. My frames at high settings averaged 60. Outside cities, they were pretty high, but whenever I was in combat. They would drop below the 60s. Take a look at these benchmarks I did earlier today.

Suppose you plan on buying the game to play hassle-free at 60 Frames on a 2K Resolution Monitor. Forget about it. Right now, it runs terribly, but I’m sure just like Odyssey, this will also receive some improvements.

With such an accurate portrayal of Vikings, Assassin’s Creed Valhalla ranks among the pioneers of open-world games. The game delivers one of the best open-world experiences, topped with the possibility that the ever lost Assassin’s meta is still alive. Valhalla also emphasizes on its character and emotion-driven story, that will keep you engaged with motives that are all about brutal vengeance. If I had to rank this game, I’d put it somewhere between Ghost of Tsushima and The Witcher 3: Wild Hunt. As of 2020, I believe Assassin’s Creed Valhalla is the best game in the series.