Elite Dangerous is a game set in the Galaxy of definitive massive space surroundings, striving towards an open world adventure with a modern generation touch, evolving the tale of the Milky Way redesigned with its full galactic proportions.

However, the game can be a bit difficult at times, things can be a bit tough for a rookie pilot out there in the age of galactic interstellar war and superpowers,  as you proceed through the beginning, every player’s story influences the unique connected gaming experience and handcrafted evolving narrative. 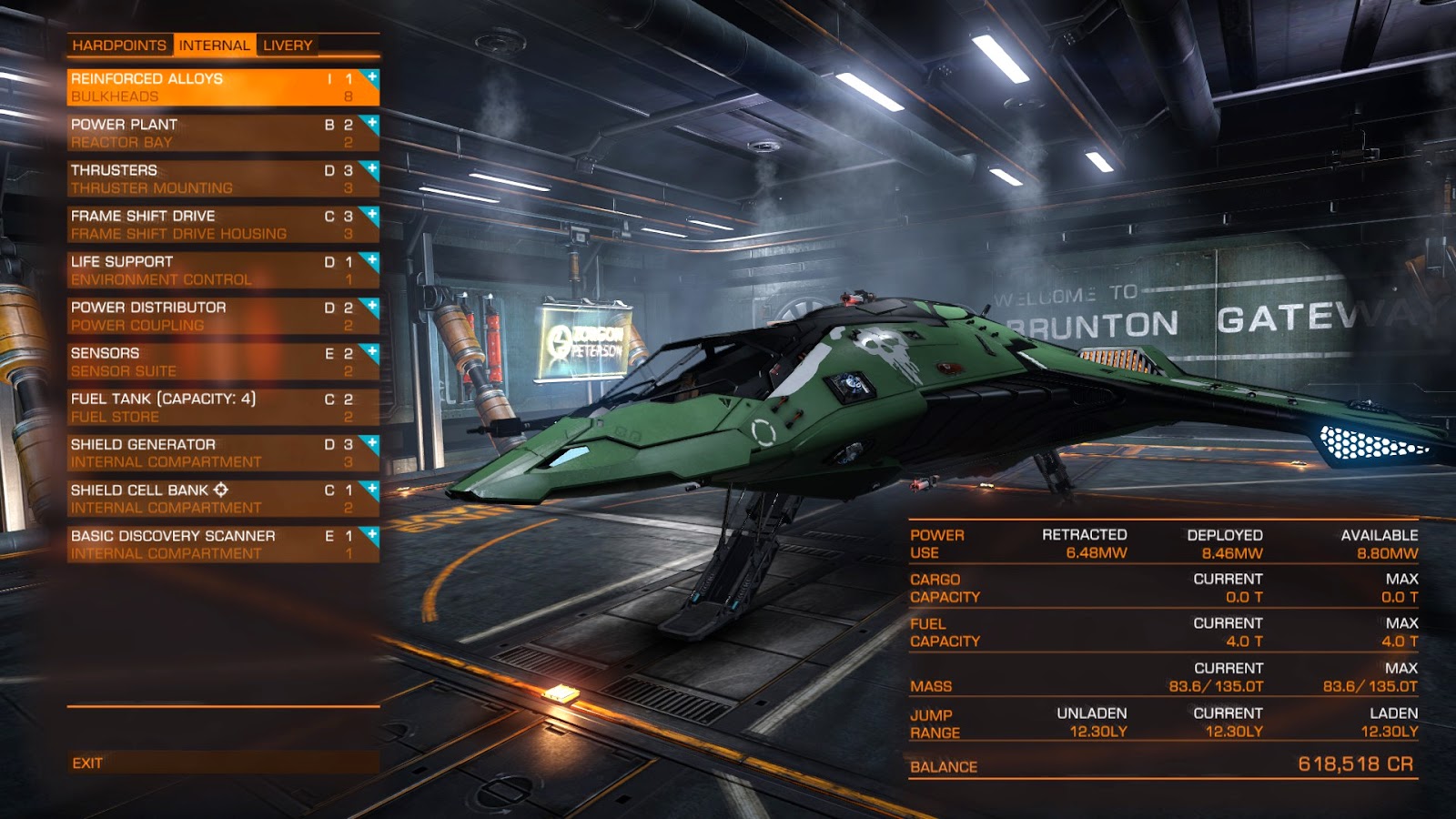 In Elite Dangerous, most probably you are never going to leave your ship, so it is a vital task to familiarise yourself with your new lightspeed fast ride.  Check out your pre-flight checks to get a good idea of the controls then feel free to disable this from Functions panel. You bought the game to fly around outside of the station, take out your ride and get around the galaxy. The Sidewinder is a free replace so don’t panic about scuffing the paint job of your ride. You can always watch the tutorial videos under the training tab on the main menu. While they might get boring, you should at least watch the docking, basic flight, and travel ones. 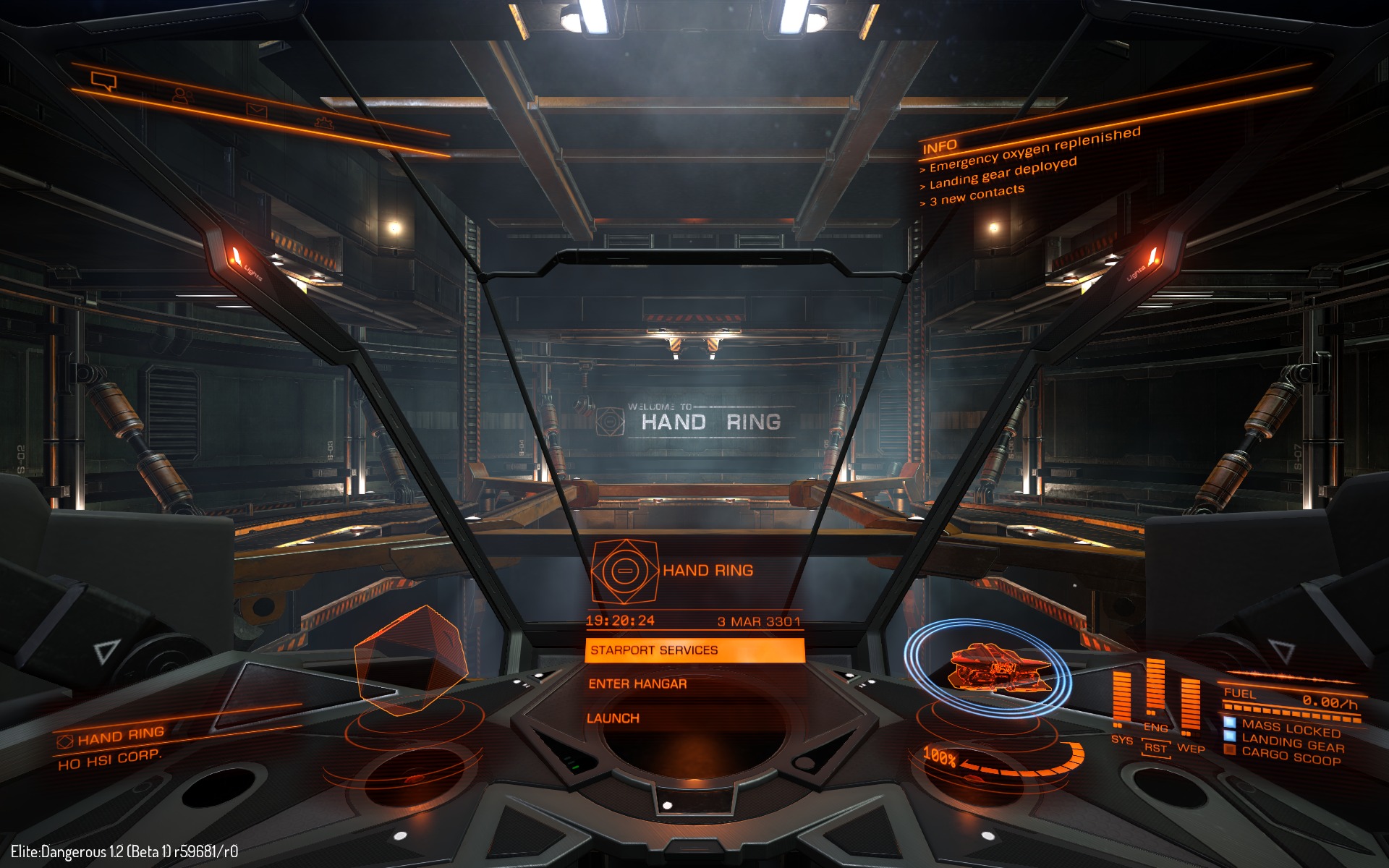 Most of the UI is pretty easy to navigate through, but some aspects may cause some headache

Tip: Try to request docking whenever you are less than 7 kilometers away from a station. They aren’t fond of ships flying into their mail slots without permission. Loitering is a crime punishable by death. 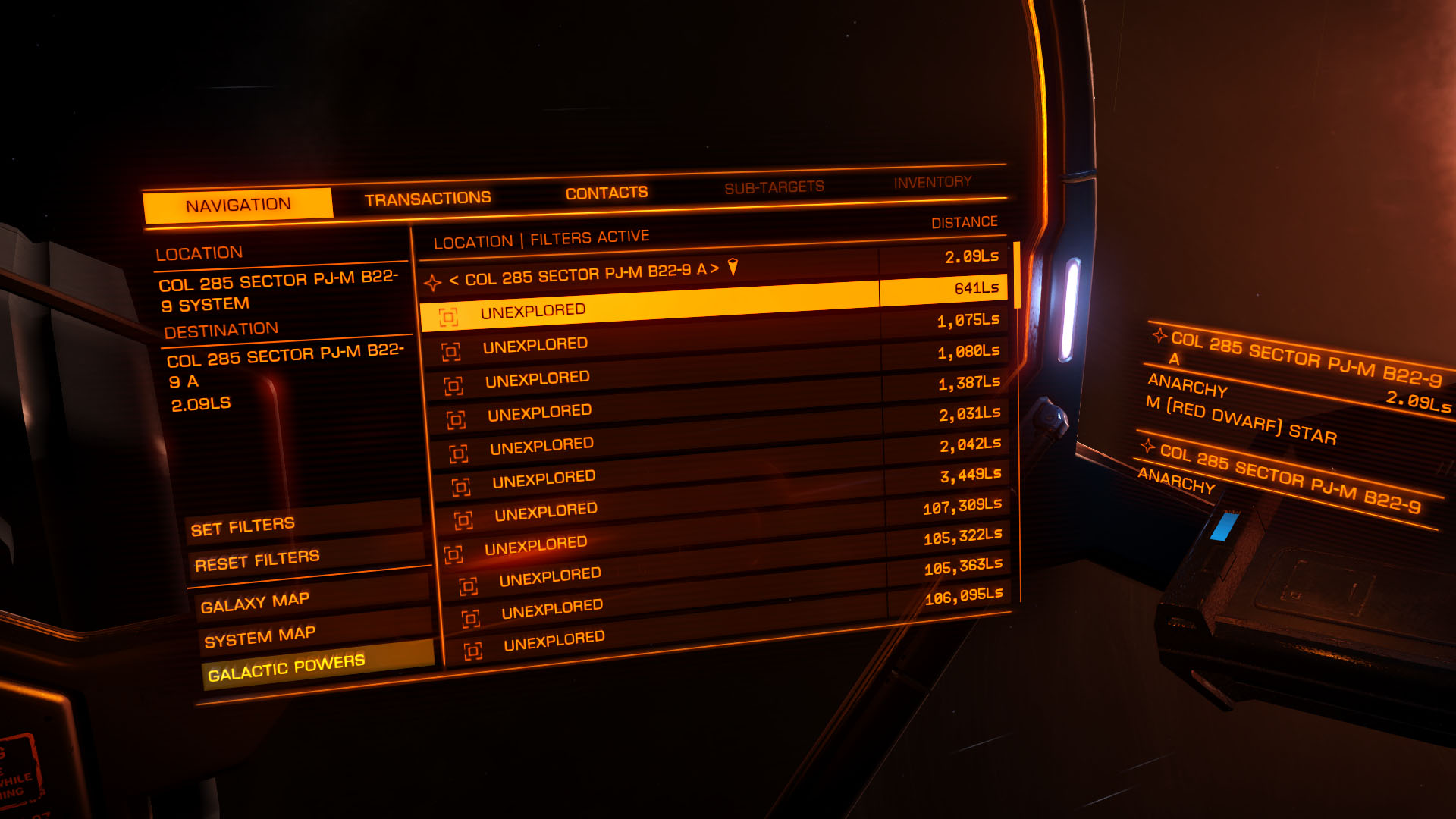 Focusing on the missions is as obvious as it sounds. Some seasoned commanders will always have a place in their minds for the Sidewinder. However, it lacks firepower, range and cargo space. This puts a limit on what you will be able to do in the early game, so you will have to move on from it as soon as possible.

To make things work, you will have to establish a home base to work from where you can make some cold, hard space dosh. Keep in your mind that Elite Dangerous takes a lot of elements into account when calculating its missions payouts. You will start from zero when you are fresh, so start gaining your reputation with local factions and increase your system impact. Keep an extra eye out for these jobs, as these will get you the most boost through your early time in Elite Dangerous:

Tip: You can advance through the early game quite easily by investigating Elite Dangerous mods and installing them as you like.

Now that you’re ahead of the first steps of the game, you might have some errands to run, and for that, you will need to know how to get to your destination. You’re going to spend the most of your time traveling either within a system or between systems. This is only possible because of your ship’s Frame Shift Drive (FSD).

Supercruise is the element through which you travel around a system. A system will always contain at least one star, around which it will have any number of planets and moons, stations, and asteroid belts. Supercruise is technically your lighting fast travel point which will get you between these bodies.

Also, keep in mind that the distance between you and certain objects can be quite difficult to judge because the distance is measured in light seconds.

At default settings, you might face problems in shooting your target properly, so go ahead into your key bindings and find the flight throttle option, now go ahead and “Set the Speed To 75%” and map it however you like. If you hit this button when you’re about 8 seconds away from your target, it will bring you at the most optimal speed and distance every time.

The galaxy map is your new best partner, as this will help you a lot. Go ahead and bind it to a comfortable hotkey and study it. The map has plenty of filters to check around, surrounding everything from trade to political alignment.

Always make sure when you’re planning a journey, plot the route and do not simply select your target destination. You can select and edit what kind of router you want under the jump data filter.

The plotted course will show up on the map as a solid orange line. If it becomes a dotted line this is the point where you will run out of fuel for your ship, so plan accordingly and avoid becoming stranded. Once you’ve got your route planned up and logged, you just need to fire up your FSD and reach your destination. 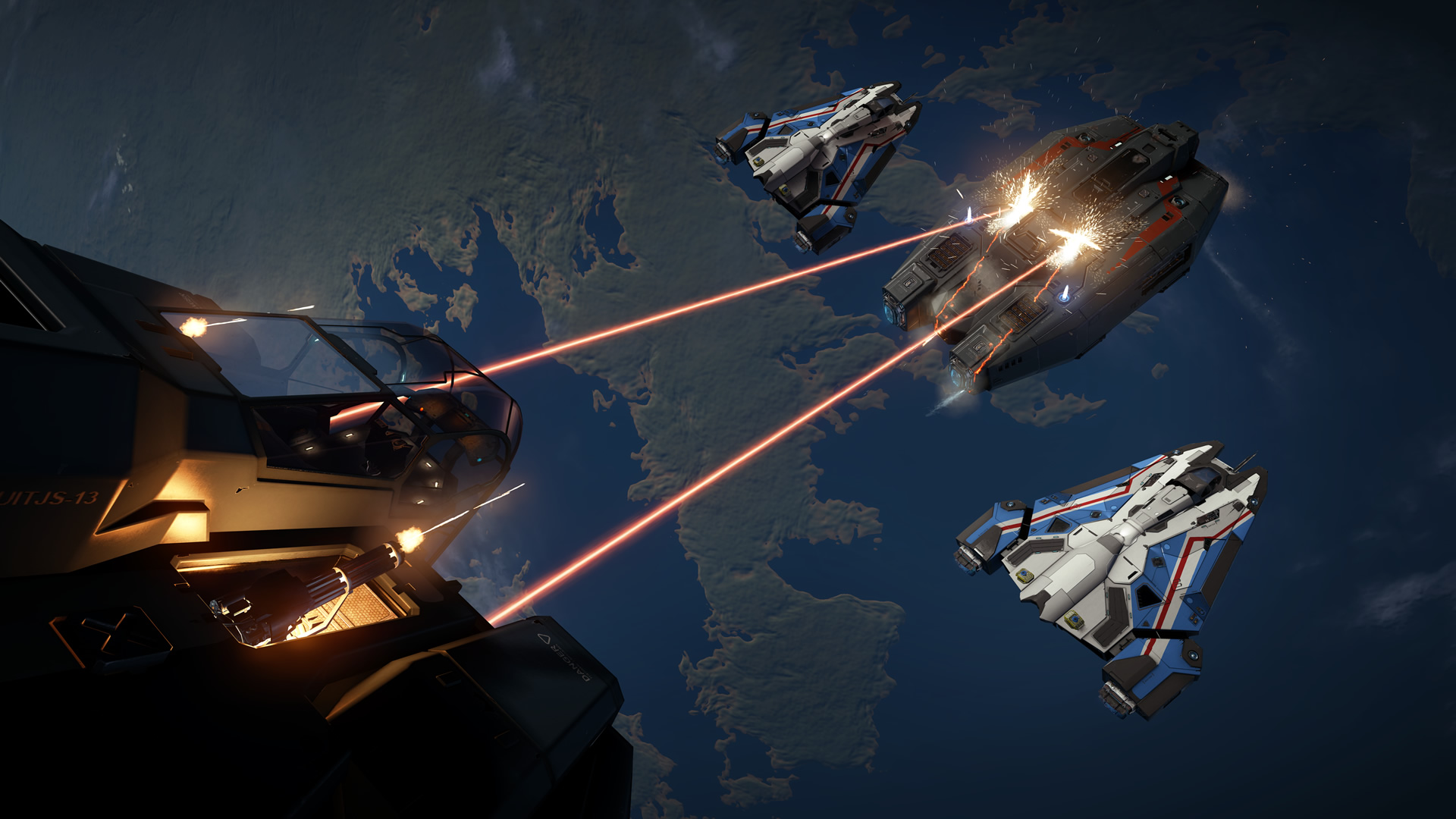 Outfitting your Sidewinder with new modules should be your next step after focusing on missions. There is a wide variety to choose from but always keep your power needs aren’t necessary, do not exceed your power plant’s capacity.

All of these items have letters and numbers associated with them, sizes are denoted by numbers as well. They also have letter grades that denote their utility. 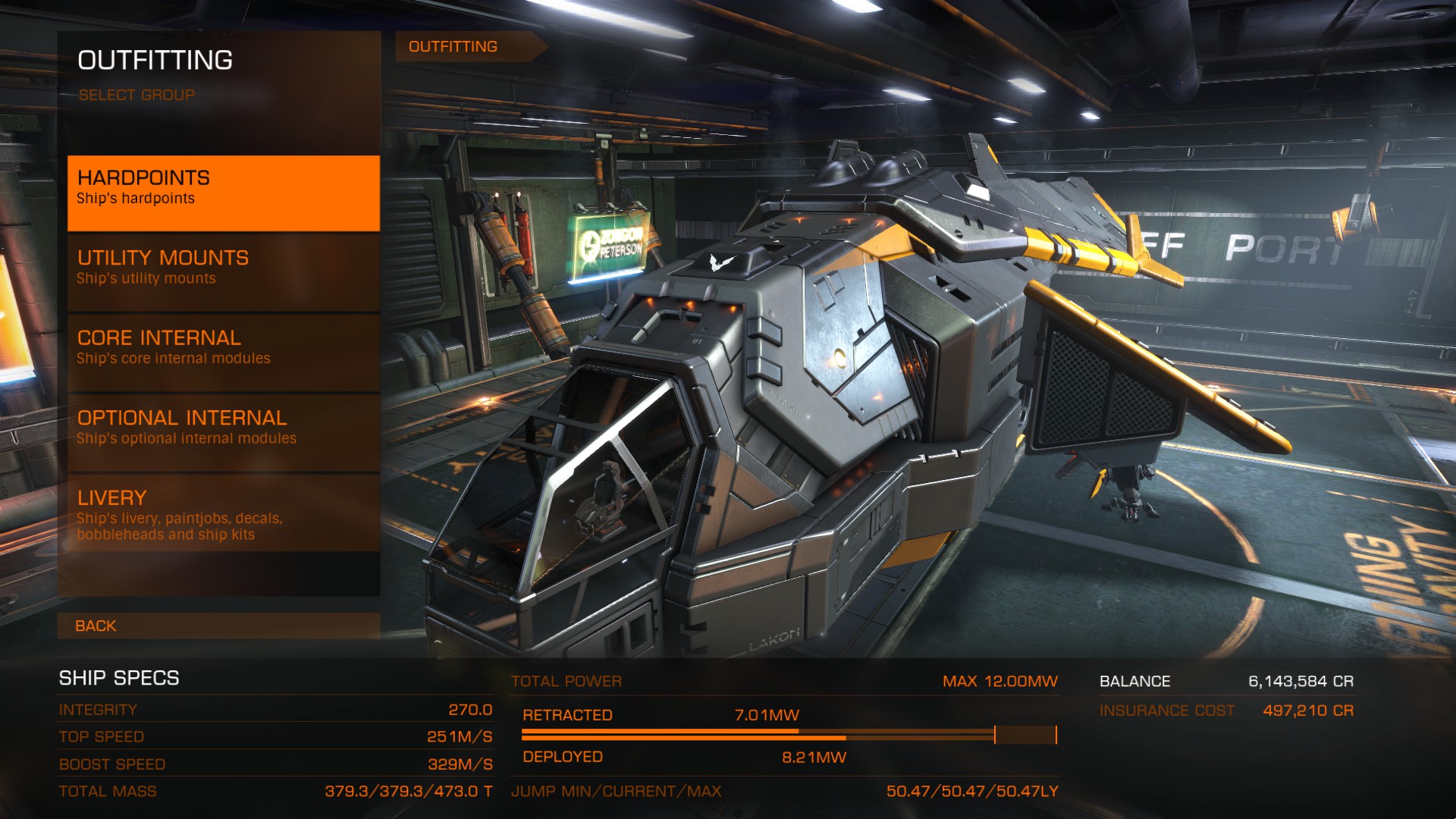 Outfitting Tip: You don’t need to upgrade your sensors or life-support systems past the D grade. Keep everything light and reduced.

In Elite Dangerous, every player should get cozy with dogfighting. With that being said, the ship you should be swapping your Sidewinder for is the Eagle.  It is unbelievably agile, has good weapon locations, and remains one of the most enjoyable ships to fly.

Sales Tip: If you plan to sell your ship, expect a 10% loss of value at the sale price. This includes the modules. Sell your old modules separately before selling your ship to maximize your credit profit.

Now, from a beginner’s point of view, you need to focus on combat too, there are two types of weapons which can make you an effective fighter

You should look to stick twin-burst lasers and a multi-cannon on your Eagle to start with. Next step is to find your prey, you will find the odd criminal around Nav Beacons. Go ahead, target and scan a ship, If it is flagged as wanted then you are free to engage.

Try to pick dogfights with mostly newbie or harmless targets at first to gain some experience of the game. When you’ll get enough combat experience, try heading to a Resource Extraction Site in the rocky rings around the planets. There are all sorts of troublemakers present in those areas, therefore, they give you a tougher challenge as well.

With all of the basic tips and guides we’ve provided, soon enough you will be ready for the next step up. The Adder is a fine purchase for pilots interested in dragging freight. The Imperial Eagle and Viper MK3 pack more firepower. Lastly, for the people looking for a good multipurpose ship and want to take their first steps as explorers, the Cobra MK3 will be perfect.

Get out there and fly dangerous, Master.