The Mercy Trophy presents itself during the main storyline gameplay. It appears fairly early in the game (in Chapter 4 to be exact). You will get a shot at the trophy when Amicia and Lucas are trying to reach Joseph’s ship so that everyone can leave the town. During their short trip, they will form an unexpected alliance with a guard. To tackle that, we have curated a guide that lists down all the steps you need to do in order to get the Mercy Trophy in A Plague Tale Requiem.

Amicia and Lucas, along with the guard, will need to solve the dock puzzle so that they can cross the area. All you need to do is not kill the guard after the whole alliance falls apart. This can be a bit tricky since the game does not direct the player to make any certain decision. Let us now move on and cover all of these things in more detail!

How To Get The Mercy Trophy

Every game has a handful of hidden trophies now. Some trophies are quite easy to come by, especially if you’re someone who likes to focus on the details of a situation. The Mercy Trophy in A Plague Tale Requiem falls in that category of achievements.

While playing the ‘Protector’s Duty‘ Chapter in A Plague Tale Requiem, there will come the point where you will need to cooperate with a Guard. Although the circumstances would be unnerving, the guard will initially coordinate with Amicia and Lucas. After you help him out, the guard will begin realizing who Amicia and Lucas actually are.

All you need to do here is not kill the Guard and flee the area. Upon doing so, you will achieve the hidden Mercy Trophy! To make things easier, we have included a step-by-step guide on the whole process below.

Before we get into the juicy part, we also wanted to include a sweet Souvenir you can get before the interaction with the Guard. With that said, once you leave the Tar Workshop after Amicia and Lucas discover the Tar recipe (along with its effect on fire and rats), keep following the path until you get out in the open.

Follow the steps down and move to the next area via a broken bridge. There will be a torchlight right in front of Amicia. To the left of it, you will notice a beam blocking a path; ignore it, as this will progress the storyline.

Instead, pan your camera to the right. Here you will notice a chain holding up a makeshift plank; use Amicia’s slingshot to break the chain and open up a new pathway.

Follow the path and reach the end of the small dock. Interact by pressing Y/Triangle/E, which will initiate a dialogue. Once it concludes, you will get the ‘A Grain of Sand‘ Souvenir.

Once you’ve collected the Souvenir, it will be time to shift your focus toward the Mercy Trophy in the game. Make your way back from the place you came from, and now go through the path which was blocked by a beam. Go up the stairsteps and interact with the door on your right.

Amicia will now enter a dock-like room that has multiple Resin Pools and a Diluent Barrel. Not only that, but Lucas will also point out Joseph’s boat in the distance. You will also notice a bunch of cranks scattered across the whole area. Worry not; our guide will also cover How To Solve The Dock Puzzle in A Plague Tale Requiem.

To start things off, break the chain on your right, which is holding up a bridge. The soldier will then emerge from the room next to the bridge after spending hours trapped there. Being saved by Amicia, the soldier will then comply with the team to help them cross the area.

Pouring Diluent On The First Pool

The final crank is present on the Barrel itself, which Amicia can interact with to add Diluent to the Resin pools, which will ultimately produce Tar. Nonetheless, the soldier will move towards the crank at his side after he has exchanged a few dialogues with Amicia.

Once he lifts up the boat, instruct Lucas to pull the Diluent Barrel towards you. After the barrel platform reaches you, hop on it and use the crank to pour the Diluent into the Resin pool below, which is surrounded by rats.

Now use an Ignifer to light up the pool and create a clear path in the first section of the hall.

Moving Towards The Second Pool

When Amicia has lightened up the first Tar pool, remain on the barrel platform and order Lucas to move it forward. At your command, Lucas will then push the platform ahead until it reaches the Second Resin Pool.

However, to put the barrel in place, wait for the guard to lower the boat so that it can hold the platform. Once the boat has been lowered, instruct Lucas to let go of the crank, this will allow the barrel to move backwards freely. Fortunately, the barrel will stop exactly where you want it to be.

Now turn the crank on the barrel once again to make Tar in the pool below. After that, shoot or throw the Ignifer to illuminate the second portion with fire.

The Third Resin Pool is blocked by another boat. However, this time around, the crank will be located on Amicia’s side rather than the soldier’s. It can be a bit tricky to get the barrel in place during the third phase. However, if you follow our simple steps listed below, you’ll get it done in no time.

So once you’re done with the Second Tar pool, exit the platform and move up on the floor to your left. Here you will notice a crank that will be able to pick the second boat, as pointed out by our new temporary ally. Before you begin turning the crank, first instruct Lucas to push the barrel forward.

Once Lucas begins pushing it forward, quickly turn the crank on your side to lift the boat. After the barrel crosses the boat, let go of your crank, so it creates a wall to hold the barrel in place. Now all you need to do is order Lucas to let go of the barrel platform crank.

Hop back onto the barrel platform and turn its crank to pour diluent into the final resin pool. Light it up using the Ignifer to conclude the puzzle.

Making A Path For Lucas

The only thing left for you to do now is to bring Lucas toward the exit of the dock. Even though Amicia has lit up three Tar pools, it won’t be enough for Lucas to walk through safely. The trio will ponder on it for a bit until the Soldier tells Amicia to throw some Tar into the pools.

The Tar will allow the fire to burn brighter for a few seconds, making a much safer path for Lucas. Without a second thought, equip the Tar and amplify the fire so that Lucas can cross the first bit of the portion.

After Lucas has passed through the first portion, move back to the boat crank you had on your side. Turn it to lift the boat so that Lucas can make it all the way to the end. Once you’ve done that, let go of the crank and head down to where Lucas is.

To bring the whole sequence to an end, there is one little thing left to do. The Soldier that Amicia and Lucas created an alliance with will still be blocked on the upper platform.

Once you’re standing next to the last pool in the hall, look toward the soldier, and you will notice a lifted bridge blocking his path. Simply pull out your Sling (make sure you equip the rocks this time) and shoot to break the chain in order to lower the bridge.

The Soldier will then continue on his path. He will grab a torch and head toward where Amicia and Lucas are in order to escort them back to their homes, as the city is under lockdown.

This is where the situation becomes getting sticky. The Soldier will insist that he can safely escort Amicia and Lucas back to their houses due to the emergency situation in the city. Since Amicia and Lucas are on the path to somewhere else, they will deny his approaches to which the solider will continue to insist and start getting a bit annoyed.

Lucas will then warn the Soldier that he’ll regret his decision if he does not let them pass. Upon hearing that, the soldier will begin to realize who Amicia and Lucas really are. Hence, you will need to make a quick decision to get out of the iffy situation.

Of course, the easy way is to kill the soldier and flee the area. To get the Mercy Trophy, however, you must first spare the soldier before escaping the area in an effort to in some manner respect their partnership.

How To Spare The Soldier In A Plague Tale Requiem

So, How can Amicia save the soldier in A Plague Tale Requiem? There is a high chance that if you don’t think the situation through and the soldier continues to step toward you, you may end up killing him.

Yet, if you’re planning to get the Mercy Trophy, it is important that you understand how to tackle the situation. The best way to go about it is to equip your sling with an Ignifer and shoot it at the soldier. Follow that up with a quick shot or throw of tar; doing so will distract the soldier without killing him and also light up the area, creating a clear rat-less path for Amicia and Lucas.

If you’re short on resources, then you could also opt to throw a tar at the Soldier’s torch. That will end up blinding him and allow Amicia and Lucas to run to the next area. Using these methods will keep the soldier alive and earn you the Hidden Trophy in A Plague Tale Requiem.

A Plague Tale Requiem has a low-difficulty level when it comes to acquiring Trophies. However, the game has many different hidden achievements that the player might miss if they don’t pay close attention.

With that, we reach the end of our guide on how to get the Mercy Trophy in A Plague Tale Requiem. If you’re someone who likes to ace the Platinum Trophy in every game, then it will be essential for you not to miss out on this trophy. A Plague Tale Requiem is a fairly easy game when it comes to trophies. You just need to pay close attention so that you don’t miss out on anything.

A Plague Tale Requiem is the second installment that follows the gripping story of siblings Amicia and Hugo De Rune. The game is developed by Asobo Studio and takes place in Provence during the breakout of the rat plague. During the storyline, you follow the steps of Amicia, Hugo, and Lucas as they try to find answers regarding the Macula infection in Hugo.

To read more informative stuff about A Plague Tale Requiem, make sure to stick around at eXputer! 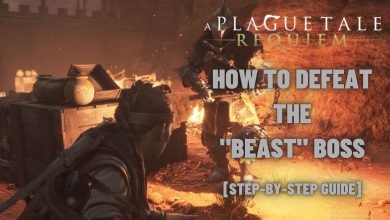