The launch of season 6 on October 7, 2021, has brought fresh and welcoming changes to Call of Duty Black Ops Cold War. There have been tons of weapon balancing, and players have taken the multiplayer lobbies by the storm. AK 47, one of the best weapons from the previous season, is also becoming a go-to weapon for many pro-players in the game. However, it is the class setup revolving around this gun that makes it a one-of-a-kind weapon in Call of Duty Black Ops Cold War. We have curated this guide to create the best AK 47 loadout Cold War so that many new and returning players can have the most out of season 6.

How To Unlock AK-47 In Cold War Season 6

Before you dive into our guide and try to create the season 6 AK-47 loadout, you must first unlock it. To have the most out of this assault rifle in Call of Duty Black Ops Cold War, you must reach level 7 and unlock this weapon. Returning players may have already unlocked AK 47, but newcomers must know how to get this assault rifle in the game. Apart from unlocking the weapon, you must start playing with it in multiplayer and zombies mode so that you can hit the higher weapon levels and unlock some of the best attachments required to create this build. We have suggested the attachments that should go with AK-47 season 6 loadout along with the weapon level requirements you need to progress.

Like AK74u, AK-47 at stock is a pretty decent assault rifle in Call of Duty Black Ops Cold War. It comes with a 30-38 base damage (depending on where you hit your target). Moreover, the stock magazine houses 30 rounds which can be further extended to 50 bullets per magazine.

The stock AK-47 does not pack enough punch to become the best assault rifle in season 6. It is why you must use pick the right attachments that overpower this weapon, making it one of the best AR in Call of Duty Black Ops Cold War. By selecting the proper attachments, as we did with the MP5 season 6 class setup, the AK-47 can possibly become your go-to assault rifle in the game.

For the optics attachment we recommend slotting in the Microflex LED to the AK-47. This scope offers 1.25x magnification which is good enough for close to medium range combats engagements. The optics attachment is by far the only one that does not penalize any stat of the weapon.

Since AK-47 comes with a little vertical recoil instability, installing the Muzzle Brake 7.62 will give a tad bit better results in stabilizing the control of AK-47. This attachment offers +4% vertical recoil control to the base value. This may not look like a significant gain; however, the results were satisfactory when we tested Muzzle Brake 7.62 on the field. This weapon attachment unlocks when you reach weapon level 3.

The barrel attachment is the most important part of the best AK 47 Loadout Cold War class setup, and we recommend picking up the 20’’ Spetsnaz RPK Barrel. This attachment offers a significant increase for the weapon, and without it, this class setup will lack the punch to eliminate enemies quickly.

For starters, after equipping 20’’ Spetsnaz RPK Barrel, the AK-47 will get a +8% increase to its damage, +50% effective damage range, and bullet velocity. The trade-off for achieving high damage for this assault rifle will be -33% max starting ammo, -20% vertical recoil control, and -15% horizontal recoil control.

Since we are focusing on creating season 6 AK-47 loadout for the close combat, the vertical and horizontal recoil control spread is less of a problem. Moreover, by equipping other attachments mentioned below, this loss can be covered back.

For the body attachment, we recommend going for the “Steady Aim Laser”. You can also unlock this attachment fairly early by reaching weapon level 5. Moreover, the weapon attachment also offers +20% hip-fire accuracy, perfect for close combat encounters. The best part of installing this attachment to AK-47 is that it does not penalize any weapon’s stat. 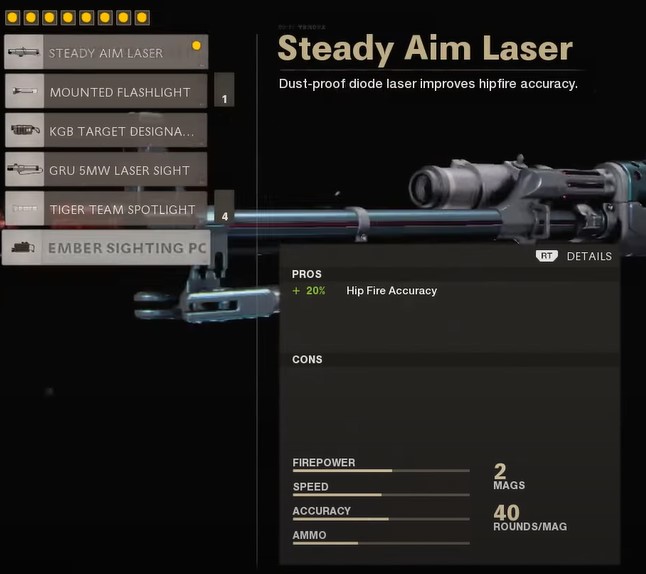 The Spetsnaz Grip is the perfect underbarrel to balance the horizontal recoil stability that was penalized after equipping the barrel. This weapon attachment unlocks at weapon level 41 and offers +18% horizontal recoil control by sacrificing -26% shooting move speed. The latter stat does not matter much since the class setup focuses on doing the max damage by getting close.

Once again, the barrel penalized various ammo carrying types, so you must equip the 40 Rnd magazine to counter the loss. This attachment unlocks at weapon level 8 and significantly increases the ammo carrying capacity for your character. 40 Rnd magazine gives + 33% magazine ammo capacity, max starting ammo, and ammo capacity at the expanse of -10% weapon reload speed. The loss of quick reload speed is just a fraction of the disadvantage, whereas, on the other hand, the 40 Rnd magazine offers much more advantages after slotting it inAK-47

For a close combat build, having the highest possible aim down sight time is a must-have stat. This is why the GRU Elastic Wrap attachment should be picked for AK-47 season 6 loadout. The assault rifle gets + 30% Aim Down Sight Time, + 90% Flinch Resistance and a better aim while going prone. Moreover, the AK 47 will experience – 10% Shooting Movement Speed and – 15% Sprint to Fire Time. Considering the advantages this attachment offers, the trade-off is worth it. However, this attachment also unlocks pretty late, e.g., becomes accessible at weapon level 53.

This weapon attachment unlocks at weapon level 54. The KGB Skeletal Stock gives AK-47 +30% sprint to fire time, +40% aim walking movement speed. However, a -30% hip-fire accuracy is also applied after slotting this weapon attachment to the AK 47. For a close combat AK-47 season loadout, having a higher percentage of hip-fire accuracy is a good omen; however, it is not always useful. Because most of the time, you will rely on optics while landing shots on enemies so hip-fire accuracy becomes more of an accessory than an absolute need for the best AK 47 Loadout Cold War class setup.

Since we already suggested equipping eight weapon attachments for the AK-47, that leaves us to pick the Gunfighter Wildcard. The entire class setup that we have suggested in the guide revolves around making AK 47 the best assault rifle for season 6 in Call of Duty Black Ops Cold War. However, the improved stability, damage, overall control, and consistency of theAK-47 is not possible without equipping the eight attachments to the weapon. So, you must go with the Gunfighter Wildcard and equip all eight attachments.

When it comes to equipping the perks, here are our suggested ones from each Perk tab that go hand in hand with this class setup.

Equipping the Flak Jacket under the Perk Tab 1 allows the character to have more resistance towards the explosives, Molotov, and combat bow flames. This perk is pretty much the go-to one for a rush playstyle, and since our AK-47season 6 class setup also focuses on fast and close combat, equipping the Flak Jacket over another perk makes much more sense.

For a run and gun playstyle, you must know when and where the enemy in your proximity is. This is why under the Perk tab 2, you must go with the Assassin perk as it makes enemies visible easily.

The Ninja perk is the final one you should equip from the Perk tab 3. It allows you to maintain stealth more efficiently by reducing the sprint noise and offers resistance towards the Field Mic.

You must also equip the best equipment because having proper weapon attachments, the secondary weapon, and the perks is not enough for best AK-47 loadout Cold War. Here are the top three equipment we think you should have in this class setup.

The ability to quickly heal and recover the lost health is always a welcome addition for run and gun playstyle players. Stimshot allows you to keep up the mobility while receiving health on the fly after using this equipment.

Primarily, C4 is a fantastic offensive explosive device that can take out multiple enemies in a second if you make the best use of it. Alternatively, players can also use it to defend themselves against an enemy team ambush.

Picking up the Field Mic from Perk 3 tab also allows gives you the benefit of knowing enemy’s locations at the minimap.

Now that you know everything that goes with AK-47 being the primary weapon for the loadout, you must also know how to play with this class setup. Since the weapon uses the Microflex LED attachment, you must stick to close to medium-range engagements only. Trying to shoot enemies from a long-range will not land the shots properly due to a lack of a proper attachment.

Moreover, stick to cover and utilize the amazing horizontal and vertical recoil control of AK-47 and try to land shots at the shoulder and above it. This weapon will take out targets in five to seven rounds and will allow your character to keep running and gunning.

You must use the C4 strategically as it can be used to lure out the target sitting behind the cover, or it can also be used as bait to rush enemies towards you. It is because this class setup works the best with one-versus-one close combat engagements. So if you see enemies rushing towards you, lay C4 traps and blow them to kingdom come.

The Flak Jacket and Ninja perks will allow you to traverse from one place to another quite conveniently and undetected. Even if you get caught by Molotov or other explosives, you will take less damage thanks to the small invincibility provided by the Flak Jacket. Even if you get hit and lose a good amount of health, using the stimshot will kick start the healing process immediately.

The overall AK-47loadout is created to favor a run and gun playstyle instead of camping. The high damage of this weapon will eliminate enemies quickly and will keep them on their toes for possible threats.

That is pretty much everything you need to know about creating the best AK 47 loadout Cold War setup. What has been your favorite go-to weapon since the launch of season 6? Let us know more about it in the comments section below.