Far Cry Primal is a game set in the 10,000BC, an uncomplicated time full of non-intellectual people, woolly mammoths, and sabretooth tigers. It’s quite hard to survive in the early era of Earth because the land of Oros is a cruel one, and if you aren’t prepared to withstand the power of the wilderness then you shouldn’t be playing the game without following our Far Cry Primal: Survival guide. 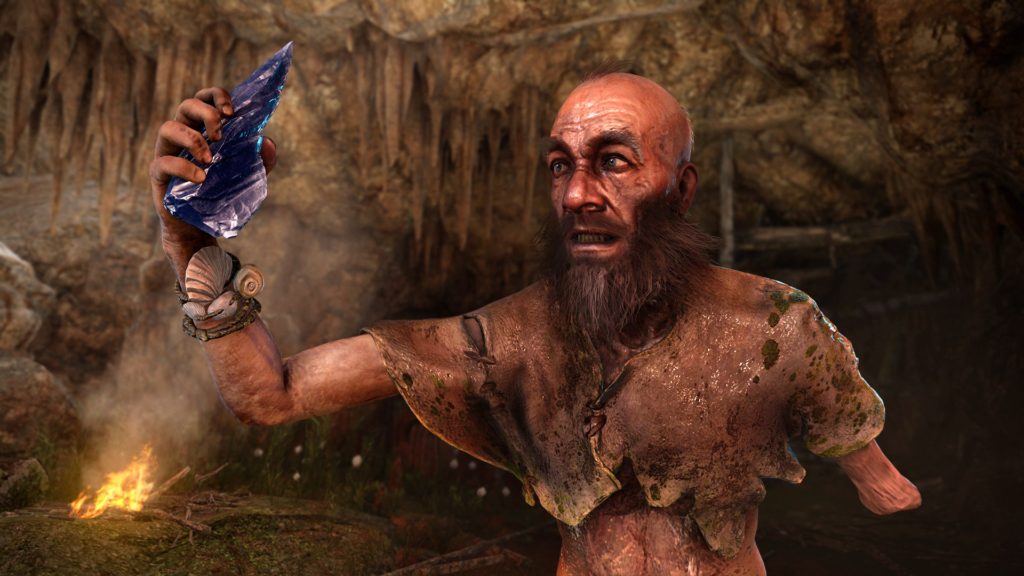 As soon as you start exploring the world of Stone Age, you’re going to find a lot of resources available around the place, so just grab as many resources as you can carry at a time to give yourself the best crafting varied options.

Go ahead and take a look at your weapon-wheel and make sure that you are stocked up with the arrows and spears you need to fight your way in the brutal wilderness, always free up room in your inventory to pack more powerful resources, don’t just stuff up your inventory with everything.

Speaking of inventory – get on the Wogah (crafter quest) as soon as possible so that you can increase the capacity of your pack (inventory) and belts. Keep your focus on the minimap always, the little bag icons show some stashes you can always grab for quick extra supplies, though some of those supplies need shooting down with an arrow first.

Use Your Weapons Adequately 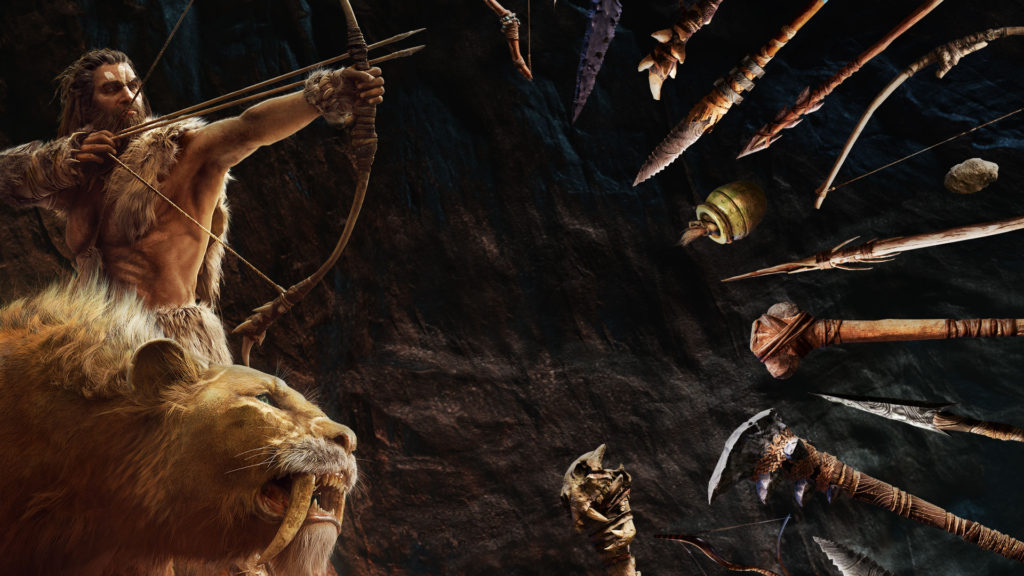 When it comes to the weapons in Far Cry Primal, there aren’t many choices. However, it’s always good to know, how to use your weapons with precise accuracy.

The bow and arrow are your main ranged weapons in-game, and you should always aim for the heads of your enemies as these result in a one-shot kill against your predators too. Until you unlock a new and powerful weapon, you’ll need to calculate the arrow drop over longer distances as well to ensure you still hit your target with precise accuracy.

The spear is a very handy weapon which can be used as a melee weapon to jab at enemies, but it gives much more damage when thrown, so your accuracy is key here as you can only carry a couple at a time. Whenever you are engaging in a melee combat with the club, hold attack to charge up your swing then release to give extra damage to your enemy. You can also stun your enemy by throwing the club at them, but again the capacity is limited so launch it with care. 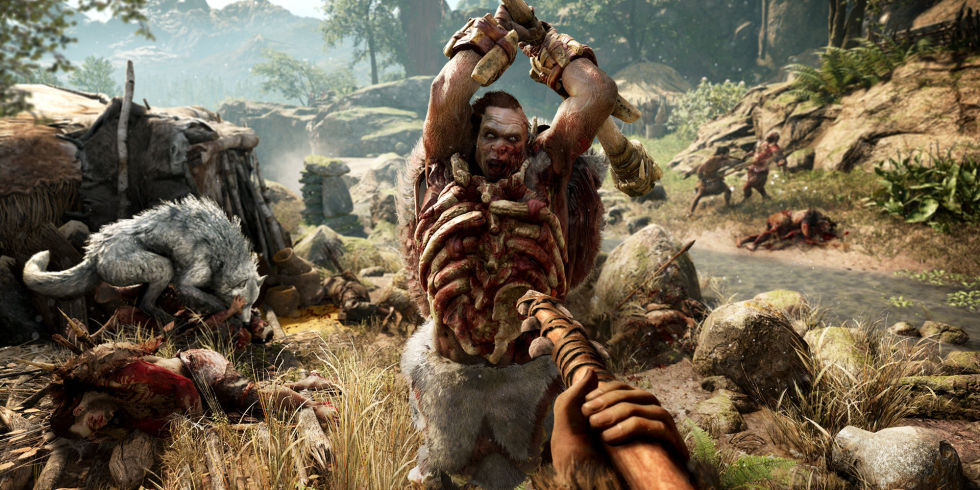 In Far Cry Primal, your world is full of predators, who want nothing more than to make you their next meal, so pay extra attention as you travel around. Keep your hearing under extra attention as well, watch out for footsteps approaching, red markers on your minimap will also indicate that danger is near.  You simply cannot outrun a hungry wolf or a bear, so as soon as you realize that you are being chased then immediately try to get to higher ground, you can always climb on top of a rock then to avoid getting attacked, even hopping over a tree can get you enough time to quickly heal yourself, if you got injured during the chase, jumping into the water can also help you escape certain enemies but know that some predators can swim too!

You Are The Hunter 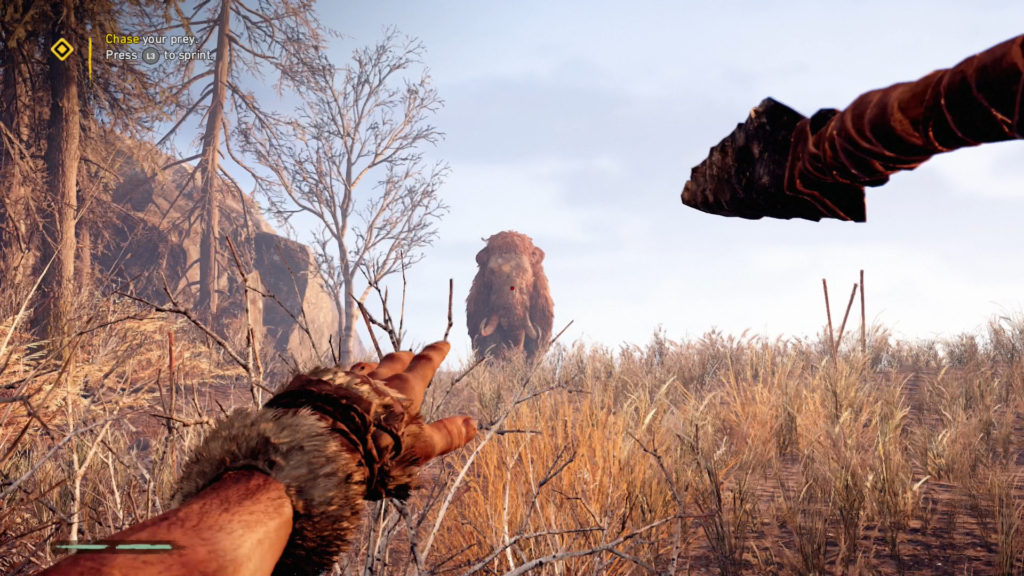 Hunting is one of the main aspects of Far Cry Primal, and you should try and gain as many skills as you can when it comes to Hunting. Always make sure you are crouched and at a distance so that animals don’t spot you. In an ideal situation you can take down smaller animals with a single arrow headshot, but if you just wound them and if you failed to take a headshot then you can either track them with your hunter vision or head in the general direction they went and keep extra attention on your minimap to find their body.

If you have a particular animal in your mind that you want to hunt, go ahead and zoom in on the main map to reveal the icons for the main beasts hideouts and territories, hovering over them will also reveal tips about their behavior. Make sure your pack is well stocked before entering in the battle with a large predator. 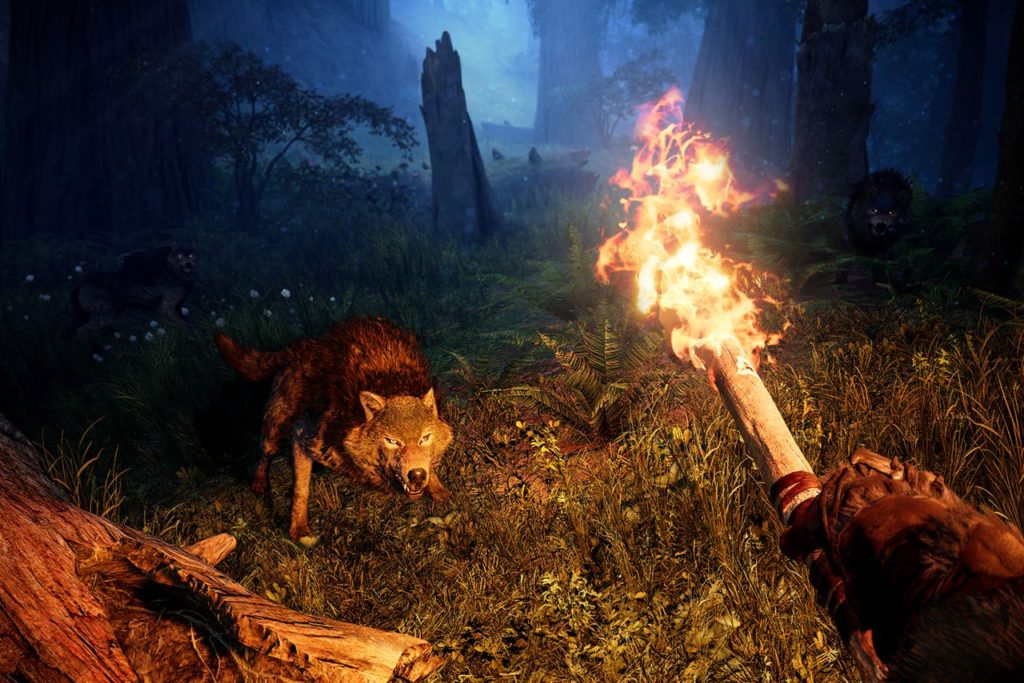 Fire is another important aspect of Far Cry Primal, you can always use fire to your advantage. Always carry some animal fat because you can always pull up the weapon-wheel and set your chosen weapon accordingly. Burning arrows can be used to set enemies on fire, as well as lighting bonfires from a long distance. You can also use fire to set enemy camps on fire hence creating a distraction too, before attacking them from a different direction in the confusion.  You will need fire at almost every moment of the game, also in the northern wastes, Fire will be the only key for your survival. 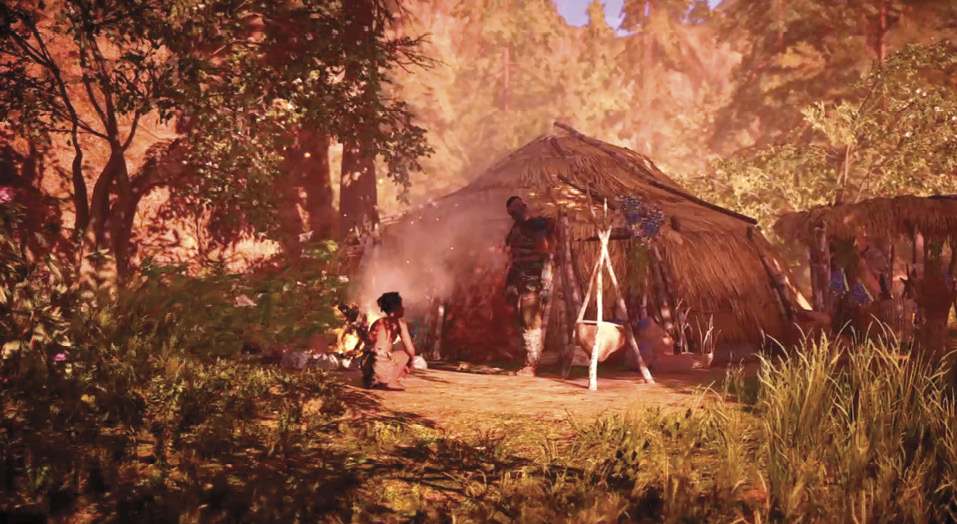 Focus on this as soon as you start playing Far Cry Primal, go ahead and recruit named specialists to join your village by building them huts, you can unlock new set of skills, weapons, and missions to complete. Make sure to upgrade your own cave to unlock additional upgrade options for your crafting.  You can also complete rescue missions and conduct more of  Wenja tribespeople to your village, and at 10-50 tribes-people you will unlock an extra pack of weapon resources and food in your daily stash reward. After you level up Sayla’s hut, rare items can be added as well to the Reward stash, this will help you with more complicated crafting projects. 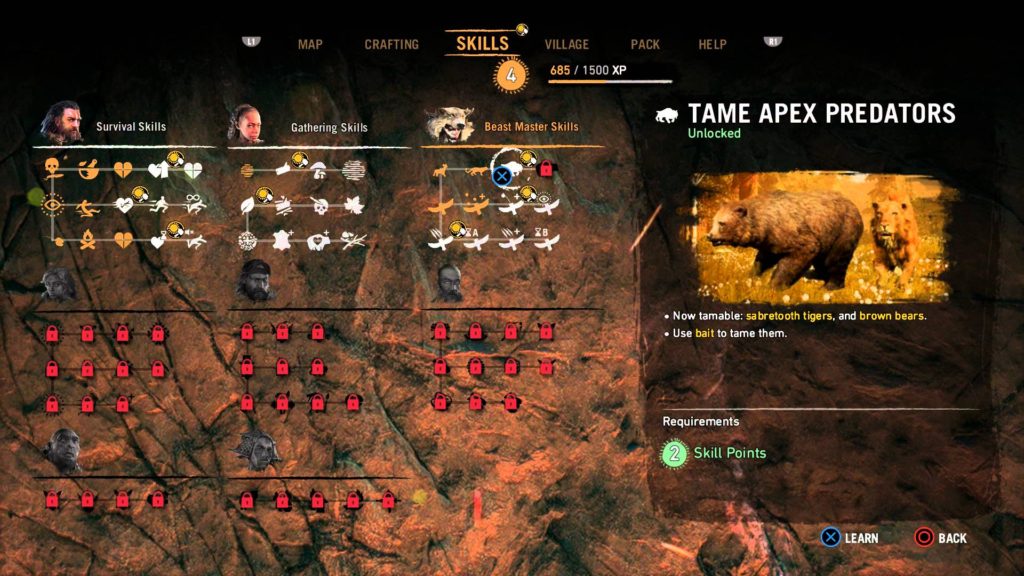 The Beastmaster skill can be learned after you’ve recruited Tensay, you can start taming animals by throwing bait (food) near them and carefully crawling up and following the prompt. Takkar will normally let you know if you can tame a particular animal or not, although you can always tap right on the D-pad to check which beast you can control. This menu also lets you see the different beasts stats and other content and you can swap your companion at any time by calling in a replacement.

Keeping a beast by your side is essential, as they will protect you by chasing different predators that try to harm you. Depending on some of the abilities of animals, they can tag enemies or warn you of their presence, as well as revealing more of the terrain around you in the map as you explore. You can command your beast to attack a particular enemy by aiming towards them. 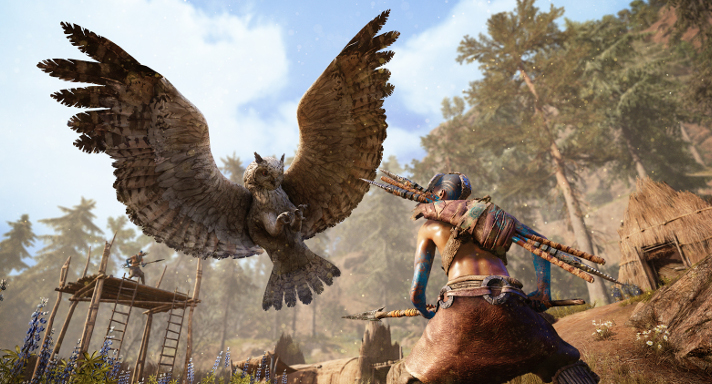 Your owl play is perfect for scouting ahead of your map, so when you will be approaching an opposing outpost or bonfire, you should send your avian companion ahead to check things out. Let your Owl fly a little low and it can tag enemies in the area, which you can then attack sufficiently. You can also purchase skill upgrades for your owl that will allow it to perform dive attacks on enemies or drop bombs on them, however, this will alert the enemies so you better watch out if you plan to take a stealth approach. 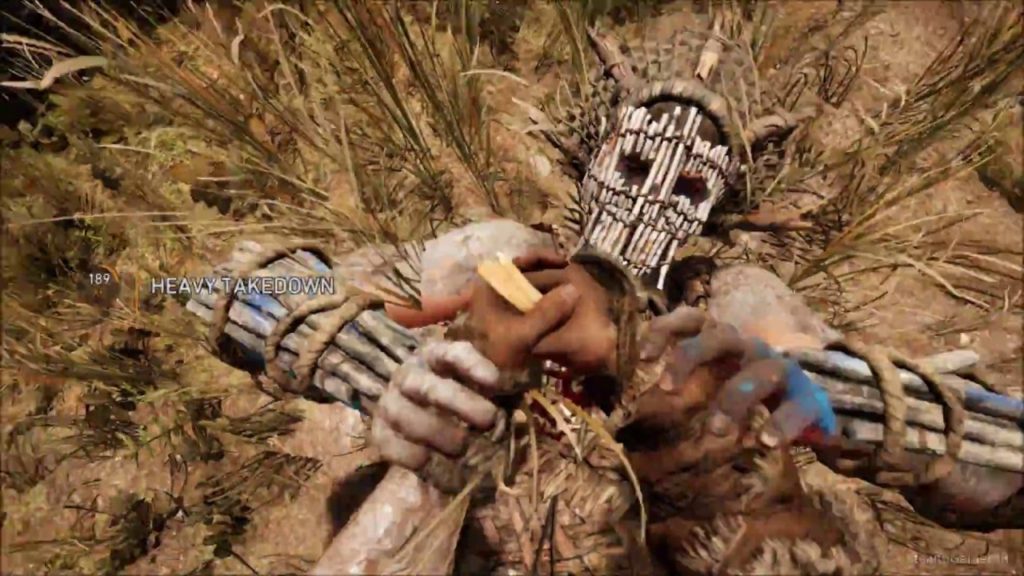 Being stealthy is one of the factors that will get you through the wilderness of the Far Cry Primal with ease, it’s always better to take the soft approach to achieve your ends. Always try to sneak up behind your enemies to perform a stealth takedown, silently eliminate them, which will allow you to drag their body out of the way to avoid discovery. If you think it’s hard to approach a certain enemy undetected,  try tapping down on the D-pad to throw various stuff and use the sound confusion to lead them to a more isolated area where you can easily spot and eliminate them. 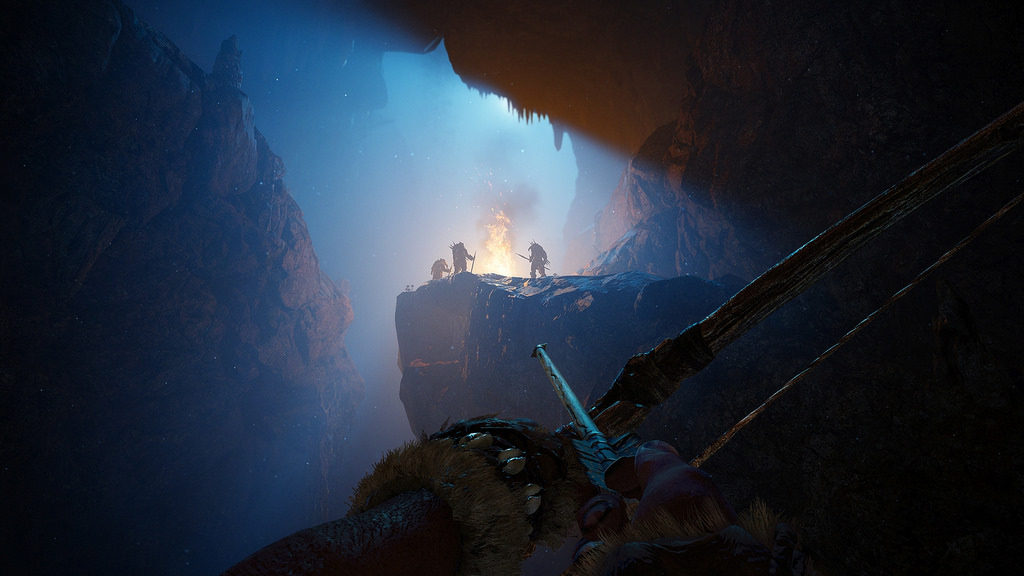 In Far Cry Primal, there’s a day and night cycle, once the night time starts, you can find unique plants, collectibles, and animals around the area of Oros. However, as obvious as it is to say the night time is more dangerous due to an increase in predators and enemies patrolling. You can use your flaming club to improve visibility and swing it around to scare some predators except those that don’t fear fire. You can also just skip the night entirely by resting on a bed at any of your camps.

How to Make Grass in Little Alchemy 2 [Method]