Her playstyle would allow you to either use her as a furious damage dealer or support. Thorr can certainly be a useful member to belong in your unit due to her great potential and skills. Consider checking out our best unit builders in Fire Emblem Heroes to bring out the true potential of your team.

Who is Thorr in Fire Emblem Heroes?

Fire emblem heroes feature multiple antagonists that players would encounter during their adventures. Thorr is one such antagonist, She is a god of war in Fire Emblem heroes, and she serves under Alfaðör. She has a much more serious personality compared to Loki and often gets annoyed by his behavior, threatening him to report him to the authorities.

She often criticizes Loki for his lack of seriousness and mocks him for losing. Thorr respects strong warriors even if they are dolls of heroes, and She gets thrilled by anyone who shows might and seriousness in battles. Thorr also has a great sense of honor and fulfills her bargains.

Thorr has overall great defense and attack stats, along with good resistance and speed. Her defense is higher than most characters in the game. Moreover, she can also use her skills to boost her attack significantly depending on her defense. So, Thorr can act as both a support and great damage dealer. 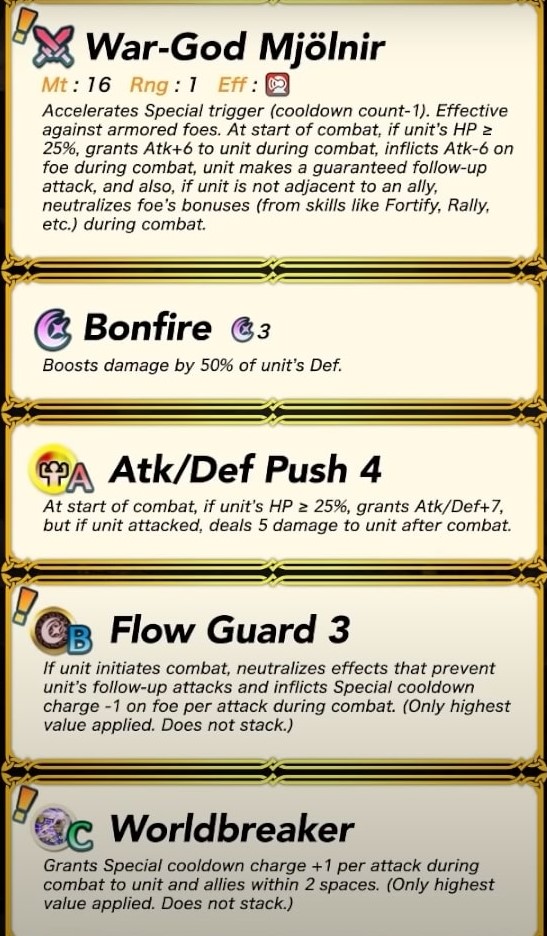 Thorr SkillsThorr’s Skills in Fire Emblem Heroes can allow her to act as a support for your team. She can boost your defense and attack potential greatly, which will aid players against many tough enemies.

The Worldbreaker passive skill is exclusive only to Thorr. It’s an extremely helpful skill that would help you to inflict additional damage to the enemies. The Worldbreaker would allow a faster cooldown so players can destroy enemies with a series of furious attacks one after another.

This skill would apply to both Thorr and her allies, so you can either use Thorr’s dangerous attacks to take down enemies, or you can use the ability to support teammates.

Since Thorr has a high defense stat of 45, you would be able to get a huge attack boost. The attack boost is sure to aid you when battling against tougher opponents.

The Flow Guard is a useful passive skill that players can utilize to inflict follow-up attacks without hindrances. The skill would also reduce opponents’ countdown making their damage-dealing capabilities much slower.

The smooth flow of follow-up attacks and the opponent’s slow cooldown can certainly make your team dangerous. They can inflict furious attacks while the enemies are powerless; the opponents would seldom be able to hit you with any of their special attacks.

Thorr is an Axe user, and she can use a variety of Axes, including her unique axe, “War-God Mjölnir”. Here are some of the weapons Thorr can use in Fire Emblem Heroes. Also, if you are playing FE3H, we listed some of the best weapons in Fire Emblem Three Hopes and relics you should know in the game.

The Iron Axe is one of the standard weapons that players can obtain in the early game. The Iron Axe has average accuracy with decent might stats. It can be used 43 times before it runs out of usage. You can sell the weapon later on in the game for 360 gold. The Iron Axe won’t be viable in the later game, so make sure to pick a better weapon for thorr if you have advanced through the game significantly.

The Steel Axe is much better compared to the Iron axe when it comes to the might stats. However, the usage of the axe is limited to only 31. The hit percentage of the weapon is 70% making the weapon inconsistent in serious combat. The steel axe’s performance is hard to predict in combat, so the Iron axe is recommended over it.

The Silver Axe is one of the deadliest weapons due to its great base might of 15. The weapon can be used 50 times before it runs out of durability. While the hit percentage is only 70%, it’s worth getting it because of its great damage-dealing capabilities.

The War-God Mjölnir is Thorr’s unique weapon and unarguably the best weapon choice for her. The weapon is highly effective against armored enemies. She can power through the armor of many difficult opponents rendering them helpless. The weapon is considered the best for Thorr in Fire Emblem Heroes.

Moreover, with her weapon skill, If she has a hp above 25 percent during the start of combat, she can also boost her attacks while lowering the opponent’s attack damage by 6. Furthermore, she can also nullify various enemy buffs, including Rally and Fortify, if a unit is not adjacent to a teammate.

Thorr can be either used as a support or a DPS, and we would discuss both Thorr builds in Fire Emblem Heroes.

It is recommended to equip her with her unique weapon, “War-God Mjölnir”. The weapon is great at damage dealing and can crush an opponent’s armor. You may also use the Galeforce skill that would provide you with one additional turn to inflict more damage.

You can also use the Worldbreaker skill that would allow further damage through faster cooldowns. Additionally, you can also equip the Flowguard skill for smoother combat. To further increase your attack and defense, it’s recommended to use an Attack /Defense Push 4 skill.

For her stats IVs, it’s suggested to either focus on increasing the attack, health, or special defense. The attack stat should be given more priority if you want to inflict tremendous damage. You can create a monstrous Thorr in Fire Emblem Heroes that can crush enemies with this attack build.

Thorr, with her support build, can inflict great damage while also acting as a tank and support. For the support build, it’s recommended to increase the IVs of defense to get maximum durability during combat. If you utilize the bonfire skill, you can also inflict additional damage depending on 50% of her defense.

You might also want to focus on increasing her resistance as much as possible, so make sure to pick weapons and passive skills that would contribute to her defense and resistance significantly.

The Worldbreaker skill would also allow faster cooldown charges to both Thorr and your teammates.

Thorr is certainly an interesting character in Fire Emblem Heroes, and She can be a useful party member whether you need a great damage dealer or support. Thorr has a great assortment of skills, and her unique weapon packs a great punch. If you utilize the builds in this guide, you can truly awaken her full potential.