Mystery of Constellation is the puzzle that you need to solve in order to reach Midnite in Mario Rabbids Sparks Of Hope, and that also requires you to activate plus activate the statues additionally.

How To Unlock the Mystery Of Constellation

Essentially, there are two parts to the whole puzzle, and solving it unlocks the passage to the second main boss fight in the game. The first includes activating the two statues, whereas the second part involves solving the Mystery of Constellation.

The maze is filled with many tough enemies but you do not need to fight anyone here. Just sneak your way through the maze or run if you get spotted. All you have to do is fight the enemy that’s guarding the key at the end of the maze.

You will find the place where you have to insert that key near the key itself. It’s a green-colored pillar, and you will not miss it in the maze. Just go near it and insert the key. Doing so will unblock the path between you and the button that activates the first statue.

Once the path is cleared in the maze, you can finally use the stair to reach your goal. And that goal is a button that activates the first statue in the game. Just press the button, and the first statue should now shift its position.

The first door is actually easy to get to. Just follow the linear path and take the route on the left as soon as you enter the room. This should bring you to the door that takes you to the next room.

Once you enter the next room, you will be greeted by two doors. One will be on your bottom left and is actually located down the stairs. That is NOT the door that you should take. The other is located near your team on the right. That is the right door that will lead you into the next room.

Once you enter the next room, you will find yourself in a hallway filled with doors. However, none of the doors in that hall are real and will not lead you to your destination. What you actually need to do is move towards the breakable walls on the left side of the hall. Break the wall in the middle, and that will reveal a door.

This is what the door looks like and will appear once you break the wall using your sonic powers. Take this door and go into the next room. The button that you need to press is close!

As soon as you enter the next room, do not move. You have entered another hallway that is filled with fake doors that lead to nowhere. However, the solution is pretty close in the hall. At the very start of the hall, look to your left, and you will see a breakable wall. Break the wall and reveal the door that takes you to the button.

This is what the door looks like after you’re done breaking the wall. Take the door to the final room that contains the button.

Finally! the whole maze of doors is now over, and all you have to do is press the button at the end. Pressing the button will activate the second statue, and it will start shifting as well.

Now that the second statue has shifted, the light from both of the statues is getting reflected onto the diamond. The Mystery of Constellation should now unlock for you to solve in Mario Rabbids Sparks Of Hope. You have successfully completed the first part of the main puzzle.

Solving The Mystery Of Constellation

Once you have activated both of the statues, go back to the main room in order to access the Mystery of Constellation. Interact with the button above the stairs in order to start solving the puzzle.

The whole puzzle is based around rotating two circles so that the whole constellation becomes complete. There is a small inner circle and an larger outer circle that you need to rotate. The solution to this puzzle is actually really simple.

Solving the Mystery of Constellation will open the main door in the room. The door actually leads you to the main boss of Pristine Peaks, and it is your final fight on the second planet additionally. Defeating the boss here will also unlock Rabbid Rosalina as a playable character. So, solving the Mystery of Constellation is actually necessary in order to progress through the story.

Mario Rabbids Spark Of Hope is a Nintendo Switch exclusive title and is the second game in the Mario Rabbids franchise additionally. The developers have really improved the overall quality of their game both in terms of gameplay and visuals as compared to Mario Rabbids Kingdom Battle.

There is a lot of content in the game as well, and the combat system is very fun and engaging. The game doesn’t even get boring, as the story is good enough to keep you invested.

Mario Rabbids Sparks Of Hope is a stunning crossover game with a smooth gameplay system additionally. It is a great entry in the Tactical Strategy genre as well.

This concludes our guide about the Mystery Of Constellation in Mario Rabbids Sparks Of Hope which also explains how you need to activate the statues in order to unlock the puzzle itself. We have explained everything that you need to do in order to unlock and solve the puzzle in a step-by-step guide. Let us know what you think about Mario Rabbids Sparks Of Hope in the comments below! 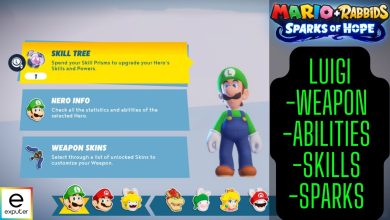