What Are Game Modes in Mario Striker Battle League

The game offers various modes that players can use. If you want to know about all the Mario Striker Battle League Modes, you are at the right guide. Before diving into the depth of each mode, let us talk about what modes the game offers. Also, read our Mario Strikers Battle League tips and tricks guide to play the game efficiently, and dominate your opponents.

There are four different modes that you can pick from the main menu of the game. Each mode further has many options to choose from. You can always play around and explore new options in Mario Striker Battle League. Before you continue reading further, take a quick look at Mario Strikers Battle League Tier List.

The most popular mode in Mario Strikers Battle League is Quick Battle Mode. The specification of this mode is clear from its name, as it is the fastest way to experience the action of the game. You can either play the mode with a group of friends or play it solo.

Players will also be required to create two teams, each with eight players. They can also pick the outfit and field of their choice. Both online and offline matches are available. Offline matches give you the access to decide configurations like time, hyper strike, and items.

However, online matches give players a chance to play with other players or by themselves. While discussing Local and Online play, consider reading our Multiplayer of Mario Strikers Battle League guide.

The Cup Battles mode makes players choose a team and a different tournament taking on CPU-controlled teams to win the cup. A maximum of four players will be able to compete in this tournament as a team in six cups. The last cup is only unlocked if the first five are beaten. Also, consider reading our Mario Strikers Battle League Unlockables guide.

If your team loses the initial match, it will be sent to the loser’s bracket. They will have a chance to defeat the opponents in the final match of the tournament for their survival. If they lose the final match, your team will be eliminated. If your team beats all six cups, Galactic mode will unlock.

The Galactic Mode in Mario Strikers Battle League is unlocked after beating the six cups, and is the same as normal cups. In fact, Galactic mode is harder and grants higher rewards. Battles in Galactic Mode will give you more coins, with each galactic cup rewarding thousands of coins.

You will also earn thousand gold coins at the completion of Galactic Mode, which you can use to buy anything that you missed earlier because of fewer coins. There is no doubt that it is a difficult mode to play, but you complete it because the rewards are worth it. We have discussed the Mario Strikers Battle Guide Galactic Mode in one of our other guides, and you surely do not want to miss it.

The Strikers Club is a mode in the game where you can either create teams or join them. You can earn uniform cosmetics, earn currency by participating in seasonal matches, and improve your club ranking as perks of being a part of this club.

If you want to manage the team, the best way is to create it, as only then will you be able to decide everything regarding your team. You can also change the team specifications at any point, depending on your needs. By being the manager of the team, you will also have control to kick players out of the team that are not performing up to the mark.

The Training mode provides players with the best avenue to practice hyper strikes that players want to perform against their opponents in actual matches. One use of training mode is to practice Team Tackle on your teammates. Team tackle requires a lot of practice to be performed effectively.

You should also know how different items work in the game, and the training mode gives beginners the best opportunity to learn the use of these items. It also gives you a chance to play the final match with all four players to practice the match.

Training mode not only helps you practice the match before actual matches, but it also gives rewards once you complete it. Completing the final match of training mode will reward you 800 coins which you can use to unlock different gears and upgrades. Also, why not go through our Mario Strikers Battle League Best Gear guide.

We have covered everything you need to know about Mario Strikers Battle League Modes in our guide. Pick the mode that best suits your play style, as your in-game experience is dependent on the mode you pick. Read the guide and decide the mode you want to play with. 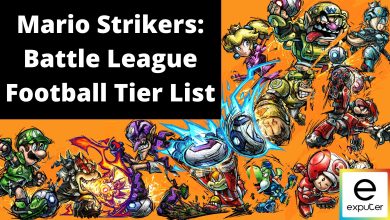