Mario Strikers: Battle League is an animated soccer game released in 2022 by Next Level Games and published by Nintendo Switch. It is the next Volume of Mario Strikers: Charged that was released back in 2007 and now it is back with more interesting features and advanced graphics.

The game provides exciting gameplay by featuring five vs five soccer gameplay with unique rules. It also offers different items in the game such as Giant Bananas and Green Shells that can be used against the enemy team to catch distract them during the match and dominate in the field.

Mario Strikers: Battle League has many modes, gears, and maps that have to be unlocked before you can use them. So, to enhance your gaming experience, we will discuss all the unlockables in Mario Strikers Battle League, which includes Championship Cup, Galactic mode, Bushido and other gear sets, and Strikers Club Stadium Customization.

If you often play Mario Strikers: Battle League then you must be aware of the fact that there are different cups available to play on the main menu including Championship Cup and Galactic Mode Cup. So let’s talk about how you can unlock and play these Cups that offer plenty of valuable rewards.

How To Unlock Championship Cup

When you start the Cup Battles, you will notice that there is a total of five different cups available in the game which are:

Each cup offers different attributes with varying specializations. Championship Cup is the most competitive one which needs to be cleared out to finish the game. If you want to unlock the Championship Cup, you have to clear all the above-mentioned cups prior to that so that you are all set to dive into the hot arena of the Championship Cup.

Once you clear all the rounds and collect the Cannon Cup, Chain Cup, Turbo Cup, Muscle Cup, and Trick Cup, the Championship Cup will automatically get unlocked after which you can play it where you will face advanced opponents with enhanced game sense.

How To Unlock Galactic Mode

Just like in the Mario Cart game, the mode is a competitive double-elimination tournament that is unlocked automatically once you complete the normal version of Cannon Cup, Chain Cup, Turbo Cup, Muscle Cup, and Trick Cup.

Once you clear all the normal mode Cups, the credits will roll and you will get a message that Galactic Mode has been unlocked. The mode is relatively more challenging and requires more effort to win each cup in this mode.

If you find it hard, you can always revert back to the normal mode of Cup Battles by going to the Cup Battle menu and pressing the X button.

Just like you cleared the Cannon, Chain, Turbo, Muscle, and Trick Cups of Normal mode, you need to do the same for the Galactic mode. Once you clear these tougher Cups, the Ultimate Galactic Mode Championship Cup will be unlocked.

This mode is the hardest Cup Battle in the game so make sure that you are all prepared with advanced gear. So, let’s talk about how you can unlock the best gear in Mario Strikers.

How To Unlock Gear in Mario Strikers Battle League

If you have considerably progressed through the game and reached higher levels, you will face difficult opponents and in order to beat them on the field, you need to be equipped with the right gear and equipment to tackle their moves and counterstrike. So, let’s talk about how you can unlock and use the gear sets available in Mario Strikers.

How to Unlock New Gear

Each gear has a unique attribute and unlocks at a specific level. The only way to unlock gear is through the Cup Battles. Each gear set will unlock one by once you beat the Cup Battles and double elimination tournaments and become champion in each.

There are six tournaments in total – you can play through the first five in any order, but you’ll need to win all five before unlocking the Championship Cup.

How to Edit Gear

Editing and switching the gears is quite an easy task in Mario Strikers. All you need to do is visit the main menu of the game and go to ‘Gear Settings’. Here, you can find all the options for customization of your characters and buying new equipment for them.

Most of the gear is available for 100 coins each and each character requires an additional piece. For example, you cannot buy just one gear item and use it on all the characters you have. Once you purchase the gear for a specific character, you can equip it and play with it in the next match.

As you progress through each level of Mario Strikers, you will get access to the latest gear and equipment which can be purchased in the Gear Setting menu using Tokens Coins. Each set has distinctive perks and belongs to one attribute of gameplay, which will provide a buff or nerf to a specific skill, depending on the type of gear you want to equip.

All the Gear sets are available for purchase once you unlock them. Here is the list of primary Gear Sets available in Mario Strikers:

How to Unlock the Bushido Gear Set

The Bushido Gear set has distinctive perks from other gear in Mario Strikers and is unlocked once you reach the Galactic Mode.

Unlike normal gear sets, that boost a specific stat by two points and reduce another in return, the Bushido gear provides +4 points to one stat while reducing the other four by one each. Let us elaborate on this more easily with the help of this table.

How to Unlock Customization Options For Strikers Club Stadium

In the Online Mode of Strikers Club, there are plenty of options available to customize your stadium according to your choice. Here are the different customization options available in Mario Striker: battle League.

To customize these areas, you need to have sufficient Strikers Club currency which is exclusive to this model.

How to Get More Coins & Tokens

It is no hidden fact that all the items and gear set in the game can be purchased through Coins and Tokens only. So, we will show some ways through which you can earn more in-game currency to buy more items and gear for your character. Here are different activities that will grant you coins in Mario Strikers:

How to unlock characters in Mario Strikers Battle League

This concludes our guide on all unlockables in Mario Strikers: Battle League. If you invest enough time in the game and get better at it, you will automatically earn more cash and unlock all the items gradually as you progress through the game.

Mario Strikers: Battle League Sales #1 In France Despite Drop To #3 In UK 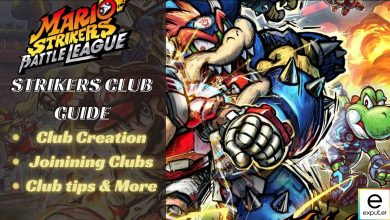