The QBZ-83 assault rifle is one the most underrated weapon in Warzone loadout. Despite having considerable stats, the weapon is often given less preference as compared to other assault rifles such as STG44 and UGR. Today, we will highlight the salient features of QBZ-83 and why you should consider equipping this assault rifle in the Warzone metagame. While you’re at it, why not go through our Warzone Rebirth Island Bunker Code guide.

COD Warzone season 3 balance patch lists some of the major changes in the game by nerfing the stats of many popular weapons, but QBZ-83 still holds decent capabilities if the attachments are optimal.

The assault rifle has a high rate of fire that can catch your enemy off guard. To check out more overpowered loadouts, go through our Krig 6 Warzone Season 3 Loadout and Best COD Warzone Season 3 Guns guides.

With that said, let’s talk about the best QBZ-83 Warzone loadout, along with the best attachments, perks, and secondary weapons. Also, consider reading our Best AX50 Warzone Season 3 Loadout guide.

How to Unlock the QBZ in Warzone

Unlocking the QBZ Assault Rifle in Warzone is very simple. All you need to do is reach level 31, and the weapon will unlock automatically. Reaching this level is relatively easy, but if you are under-leveled and want to upgrade quickly, you can use the double XP tokens or play more games during the double XP weekends. Also, consider reading the best AMAX loadout Warzone season 3 guide.

We all know that the usage rate of QBZ-83 is not that massive in Black Ops Cold War. However, when it comes to Warzone, it can certainly prove to be a reliable primary weapon. Also, if you love playing COD Coldwar, then make sure to go through our Best Sniper in Cold War, Best AR, and the Best MP5 Class in Cold War guides.

The QBZ weapon can show its true powers in close-quarters combats as it comes among the highest firing rate assault rifles in the game. Due to the high rate of fire, the recoil might be a bit tricky to predict and cause some difficulty while using it in medium to long-range interactions. Also, check out our MP40 Warzone Season 3 loadout guide.

The common problem encountered by gamers while using this weapon is its recoil control. In order to make the weapon stable and control the shakiness of the firearm, you can use suitable attachments that can enhance the weapon’s performance on the battlefield.

You can use the following attachments with QBZ-83 in the Warzone. If you want the best in-game setting for Warzone, you can check out our Shroud Warzone Settings guide.

Using the attachments mentioned above with the QBZ greatly improves its efficiency and makes it even more deadly. The muzzle brake and foregrip combo assists in controlling the weapon horizontal and vertical when firing in auto mode. It is recommended to use the marathon stock to provide better mobility, as it greatly improves the sprint to fire time, enabling you to react to enemy attacks more efficiently.

You can change the Optic attachment according to your choice, but Axial Arms 3x sight is considered to be optimal as it has more field view that provides better vision in close to medium range engagements. Also, consider reading our COD Warzone Best Audio Settings guide.

It is no secret that QBZ is not the best option for long-ranged combats and lacks in this domain. So, carrying a secondary weapon that can fill the loophole for loadout 1 is the best way to have a perfect combo in Warzone. That is why HDR is a suitable option, as its recoil control is relatively easy. To make HDR even more deadly, you can equip it with the following attachments.

The Agency Suppressor along Raider Stock makes the weapon stable by reducing its noise and increasing its mobility. The 5.9″ Task Force Barrel, along with Raider Stock, works efficiently and assists in controlling the weapon’s horizontal and vertical recoil. The Salvo 53 Rnd Fast Mag will save up your time and enhance your reaction time by reducing the reloading speed.

Having grenades in your loadout is a necessary thing as it will assist you in many tasks and help you to escape difficult situations. Following is the best grenade combo for the Warzone Loadout.

The proximity mines are often overlooked, but they can be quite helpful in catching enemies off guard. You can place them in common areas where enemies are expected to pass from.

Similarly, you can also use the Decoy Grenade tactically to catch the enemy off guard without even engaging into one on one fight. If an enemy is camping inside a building, you can throw a decoy to create a panic situation for them and then barge in to kill them easily.

Possessing optimal perks greatly assists when engaging in battles during Warzone. Following are the optimal perks to equip when using the QBZ Warzone loadout.

This loadout is recommended if you like to engage more in close-quarter combats. The Muzzle Brake 5.56 is specifically made to control and reduce the horizontal and vertical recoil of the weapon. The barrel, along with with the Field Grip, enhances the accuracy of the gun by reducing its shakiness.

The Diamond Back Reflex is specifically selected as it provides a better field view and allows you to get better angles for close-ranged targets.

What could be a better combo than combining the classic Qbz-83 Assault Rifle with an Ultimate MAC-10 SMG with high DPS. If you make an Assault-SMG combo, you will never have to worry about running out of bullets when engaged in hot battles, as you can always switch your weapons and continue the action.

One thing to keep in mind is that this loadout is specifically made for close combat lovers, and you will lack in long-range to some extent due to the absence of any bolt action sniper rifle. To make Mac-10 even more deadly, you can equip it with the following attachments.

The Raider Stock assists in stabilizing the weapon, stable Whereas the Agency Suppressor makes it stealthy by reducing its noise and increasing its mobility. The 5.9″ Task Force Barrel, along with Raider Stock, works efficiently and assists in controlling the weapon’s horizontal and vertical recoil. The classic Salvo 53 Rnd Fast Mag will again assist in making reloading speed faster.

Changing grenades according to your choice is always an option. However, some are more efficient than others in different situations. So, it is crucial to have a sense of your secondary gear. Following is the best grenade combo for this Warzone Loadout.

The Semtex can be used to deal explosive damage and target multiple enemies that are capturing a specific place. The Stun Grenade is also quite useful if used correctly as it makes your enemy blind, giving you a fair advantage to catch them off guard and take them out.

Possessing optimal perks greatly assists when engaging in battles during Warzone. Following are the optimal perks to equip when using this QBZ Warzone loadout.

Now that you have read the article, you can craft the best QBZ-83 loadout for Warzone. You should keep in mind that you can use any loadout you like, but the practice is key to becoming better at the game. So, make sure to invest some time to become unstoppable on the battlefield. So, select the best weapon you like, equip the optimal attachments, and get ready for some action. 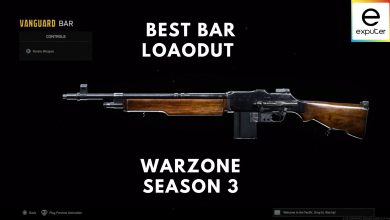