The latest addition to the horror genre, Scorn, has caught many eyes with its gloomy atmosphere and intriguing puzzles. However, the game truly doesn’t hold your hand through any of the portions. In fact, the first-ever puzzle in Scorn, the crane slide puzzle, can be quite confusing but worry not, as we’ll guide you through it!

To get past the big door to progress to the next section of the game, you need to complete the crane slide puzzle in order to complete the mine cart puzzle that comes after it. However, there are so many different combination possibilities that you could end up spending several dozen minutes just figuring it out.

Once you’ve arrived at the sliding crane puzzle, you’ll notice that there are two terminals, as shown in the image above. The one on the left will trigger the arm near the wall to slide across and grab whatever is at the lit-up section to its right. And the one on the right will allow you to use the arm on the right near the pods in order to move them around.

Our goal is to place one of those pods on the right on top of the lit-up section. That will allow the mechanical arm to grab it and place it in the lift-like structure in the middle, which will ultimately solve the puzzle.

There’s going to be a lot of moving things around in the puzzle. Therefore, to make it easier to understand the wording, we’re going to set a few references and keys so that it’ll be easy to explain and interpret what is happening throughout the puzzle.

The first step that you need to do in order to solve the puzzle is to waste one of the pods. Not only will that create enough space for us to move around the other pods, but it’ll also showcase the fact that we can’t just add a single pod (not connected to any other pod) in the target area to solve the puzzle.The first step is to go to the terminal on the right and start using the mechanical arm. Grab the horizontal border on the left in the second row, as shown in the image. Drag it all the way to the right until you can’t move it anymore.

The second step is to grab the third single pod in the third row from the left. You can refer to the image to get a better idea. You have to move the single pod towards the lit-up area; you can do so by sliding upwards, left, and then upwards again.

Go to the terminal on the left and start it up. It’ll grab the pod, but as it tries moving it towards the lift, it’ll get dropped on the way. If you try offering another single pod to the machine, it won’t even accept it, and that brings us to our second part.

Now that you’ve wasted one of the pods, we can begin to move towards solving the puzzle. Remember the horizontal pod in the second row that you moved all the way to the right? You need to grab it again and move it all the way to the left again, as shown in the image.Next, you need to move around a bunch of single pods. If you look to your bottom-left, in the third row, you’ll notice that there are two pods there but with space between them. Take hold of the pod on the right and move it up next to the pod on the left so that they’re connected.In the third row, go towards the opposite end, to the right, and take hold of the single pod over there. Move it one step to the right so that it’s at the extreme right of the third row (refer to 1 in the image). Then, go to the rightmost of the fourth row, and grab the pod. Move it one step upwards and one step right so that it’s right next to the pod that you moved in the step before (marked as 2 in the image).

Then move to the second row and take hold of the third pod from the right; it should be a single pod. Drag it all the way to the left of the third row next to the two single pods (marked as 3). Lastly, go to the first row, and from the left side, pick the second horizontal pod.

Drag it one step down, and one step left such that it’s aligned with the horizontal pod on the left in the second row (marked as 4). After following all the steps, your wall should look like the image shown above. We’ve also highlighted the steps from 1-4 for your ease.

After adjusting all of the pods as described above, you’re ready to move the target pod around. We first need to get it out of its position and then create a bit more space for it. As shown above, by the red arrow, grab the vertical target pod from the fourth and third row and move it to the position shown.In the next step, you have to move the three horizontal pods that are in the first and second rows on the left. Start off with the horizontal pod in the top row, marked in red. Grab it, and drag it all the way right. Bring it one step down and then one step to the right. And then take it all the way to the bottom, into the fourth row.

Stack the horizontal pods in the second row on top of the one that you just moved into the fourth row. Starting with the pod that’s marked in blue, move it up, take it all the way right, move it one down, one left, and then all the way down. Repeat the same for the last pod, one marked in yellow.

You can refer to the image for help, the boxes represent where the pods used to be and the arrow indicate their new position.

After moving the horizontal pods, you need to move the single pods that are placed in the bottom left, in the third row. Follow the marking in the image, starting with the red one, which is the pod to the right of all of the single pods. Grab it, move it upwards into the first row, and take it all the way to the right.

Then move to the pod that is marked by the blue marker. Grab it, move one right, and then all the way to the top and then all the way right. Move it one step down so that we’d have space for the pod marked in yellow. Move the yellow one to the remaining position, allowing you to be almost done with the puzzle.

Finally, initiate the mechanical hook on the left again by using the terminal on the left. That should allow you to complete the puzzle. The humanoid character from the pod will get grabbed and put into the lift and taken all the way to the bottom, allowing you to continue onwards to the next puzzle.

In case you’re struggling to find the Scorn crane slide puzzle location, then you’ll find the following section useful. It is the first puzzle of the game; right after, you move into the tunnels from the starting place and get led to a giant hall.

At the centre of the hall is a pillar with a slope leading upwards. If you start from the bottom of the slope, move right and look towards the walls, you’ll find an opening that you can get into by crossing a train-track-like bridge shown in the image.

Go inside the room and look to your left. You’ll find an elevator. Initiate the elevator, and it’ll lead you directly upwards towards the Sliding Crane puzzle. You just need to go through a small walkway to reach it.

With that, you know how to solve the sliding crane puzzle in Scorn. It can be tricky because of all of the adjustments required in order to finally get the target pod in place. But once you figure out the exact pattern, it’s a walk in the park! 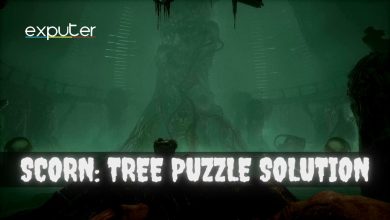 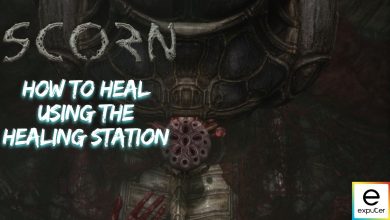 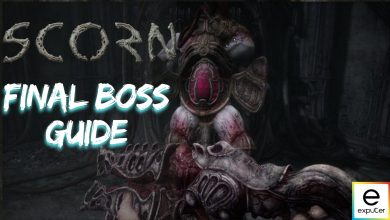 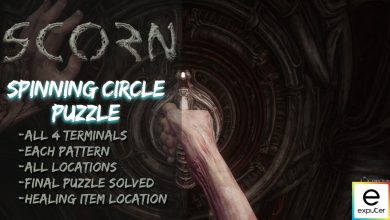