There are plenty of characters that frequently make appearances throughout Splatoon 3, especially in the story mode. Right off the bat, you will be introduced to Agent 3, the playable character in Splatoon 3. You can customize it as per your choice and begin splashing ink across the battleground. In our guide about the Characters in Splatoon 3, we will cover Agent 3, alongside some worth-mentioning names such as Craig Cuttlefish, Frye, Shiver, and Big Man.

Well, without further ado, let’s introduce you to the different characters in Splatoon 3. Then we will also go through the list of Top Characters in the game.

Types Of Characters In Splatoon 3

Despite only having one playable character, Agent 3, Splatoon 3 does have plenty of characters that appear on screen quite frequently. These characters add a lot to the game. They build a whole narrative around Splatsville. The NPCs are by far one of the main factors in Splatoon 3 that takes the game to the next level. We hope that in future DLCs, you get to play with some of these characters, especially the Idols (we’re looking at you, Big Man!).

So before we get into the list of the Best Characters in Splatoon 3, let’s get familiar with the different types of characters you will encounter while playing as Agent 3.

Of course, the first and by far the most important character in Splatoon 3 is the playable character. In their third installment, Nintendo has introduced a new version of Agent 3, which the player takes control of right as the game begins. Agent 3 is the only playable character in the base game (that can potentially change in future updates).

Luckily, in Splatoon 3, you will pick an Octoling or Inkling species right at the start of the game. This allows the player to decide which species Agent 3 belongs to. You can also choose the gender of your playable character and completely change their features.

For now, we only wanted you to get in line with the options of playable characters in Splatoon 3. In a nutshell, the player can choose the species of their protagonist right away although there isn’t any option to completely change you playable character.

The Idols are the front faces of every Splatoon game. We had the ‘Squid Sisters’ and ‘Off the Hook’ bands in previous games who hosted Splatfest. For Splatoon 3 we have been introduced to the Deep Cut band that consists of three idols. You will repeatedly see them as you play through the story or when you take part in Splatfests.

Let us feed you some information about these new Idols in Splatoon 3 so you can get familiar with them. First up we have Shiver, who is an Octoling with a proud personality, she is known as the ‘Shark Tamer’ because she openly wears shark tooth earrings.

Next up we have Frye, who is by far the craziest member of the Deep Cut band. She is reckless and loves to dance in her eye-catching trousers. Frye lives life at the moment and has a knack for treasure hunting.

The last but not least, we have the Big Man. Despite being a huge Manta-Ray it’s probably one of our favorite characters in the game. He hardly lets out a squeak and the player gets hit with some wisdom in an instant. The Big Man usually carries a huge TV when the Deep Cut is hosting Splatfest.

Of course, there are even more characters, some significant and some minor, who appear during the story mode or online multiplayer modes. We found it necessary to brush over some of these characters since they have the potential of making it onto our list of the Best Characters in Splatoon 3.

Craig Cuttlefish, better known as Cap’n Cuttlefish, is a recurring character in the Splatoon Series. He appeared as a veteran and captain of the Squidbeak Splatoon, however, in Splatoon 3 he is retired and has handed his captaincy to the former Agent 3. He appears in the newest installment occasionally to guide the protagonist.

Other than that, there’s also ‘Smallfry‘ who is a companion of Agent 3 throughout the story. The little buddy can also be thrown at enemies to distract them in the story mode. Judd and Li’l Judd also appear during multiplayer games as the referees in the match. Judd is the main referee, whereas Li’l Judd is the clone of Judd and works as the assistant referee.

Splatoon 3 also has various vendors in the game and the cool thing about them is, that they have a personality and a backstory of their own. Which adds a lot of depth to the game. There are multiple vendors you can come across in the game. We will quickly note down some of them before heading on to the next character type. Most of these characters in Splatoon 3 are not the central figure of the story but they are fun to interact with.

The Octarians remain the main enemies of the protagonist in Splatoon 3. They are octopus-like creatures led by the notorious DJ Octavio. We are leaving out a few characters in this section as it would spoil the storyline for you. We are only highlighting the known enemies in the game.

Be wary, the Octarians are now stronger than ever in Splatoon 3, after presumably getting mutated. They now have purple eyes and brown fur, however, some prominent Octarians still appear the same in the game.

Despite being popular due to its online multiplayer mode, Splatoon 3 has a great storyline thanks to the amazingly designed characters. By now you’re well aware of the type of characters you will run into during your gameplay. However, for us, a handful of these characters stand out and make Splatoon 3 feel unique.

Of course, being the only playable character, our list will contain Agent 3 for sure. We will include both variations of Agent 3; the Inkling and Octoling species. Without further ado, here are the Splatoon 3 Best Characters including NPCs.

The Inkling Agent 3 is by far the best character in Splatoon 3. Apart from being a playable character, there’s this generic association attached to the Inklings since the first game in the Splatoon series.

When you start up the game, you will straight away customize Agent 3. The game will ask you to pick a style from 4 different options. The first two options belong to the Inkling Species while the latter two are for Octoling Species.

It is a great step by Nintendo for allowing the players to choose the Octoling Species right from the beginning. You can now experience the whole game while being part of a species that’s part human and part octopus. Octolings were once part of the Octarian army, however, they managed to escape the evil reign of DJ Octavio.

Now you can choose to play as an Octoling character by picking the relevant style in the Agent 3 customization menu.

As we mentioned before, there are no added bonuses to any species it just alters the appearance and color preference of your character (doesn’t apply on the online mode). Despite all of that, the Octoling Agent 3 is one of the best characters in Splatoon 3.

When it comes to NPCs, no other character can beat our beloved Big Man from the Deep Cut band. Despite having only a few voice dialogues, we just love how goofy and cute he looks. Big Man is a Manta ray that co-hosts the Splatfests and Anarchy Splatcast with Frye and Shiver.

Each member of the Deep Cut represents color during the Splatfests. The Big Man leads the red team which is why our decision always lies wherever are big blue friend is.

We were never going to miss out on our small companion! Smallfry is the best pet Agent 3 could wish for. Also known as Little Buddy, the Salmonid is the smallest kind of its species. When you begin the game, after customizing your character you can also change the hairstyle of Smallfry.

Other than just sticking by your side during the story mode, Smallfry’s company is really valuable. He also helps distract enemies or cause damage to them when Agent 3 throws Smallfry. On top of that, in many situations, Smallfry will help you solve puzzles in Splatoon 3. Smallfry sometimes even rides the back of Agent 3 during the campaign mode.

Li’l Buddy is the best partner you could ask for in Splatsville, don’t judge it by its small size. Smallfry is capable of doing it all!

We have already briefly covered Craig Cuttlefish in the previous section. However, the reason he makes it onto the list of the Best Characters in Splatoon 3 is that he is by far the most recurring NPC in the Splatoon series. Cuttlefish was once part of the Inkling army, he then went on to become the captain of Squidbeak Splatoon.

However, he returns to Splatoon 3 as a retired man. You first encounter him after you’re done creating Agent 3 and reach the Plaza, you will be able to see Craig Cuttlefish poking his head out of a manhole.

In Splatoon 3 he guides Agent 3 through various situations, which is why he is by far the most helpful character in Splatoon 3. Cap’n Cuttlefish always looks as if he’s up to no good but he always has his eyes on everything that goes around him. However, behind that tough veteran lies a pure heart!

So there you have it, our list of the Splatoon 3 Best Characters, which features both playable characters and NPCs. Although, it is worth noting that these characters, especially the playable ones, will have no effect on your gameplay.

That is all from us. We have written down all the Types of Characters along with the Best ones in Splatoon 3. You can now head on and play the game and interact with all the NPCs we mentioned to enhance your gaming experience. The story mode in Splatoon 3 is quite rich and shouldn’t be ignored at all. You’ll get to find out so much cool things about Splatsville and you can even unlock the best items and gears by getting in touch with the Vendors.

We hope you enjoyed reading through our guide. To learn more stuff about Splatoon 3 make sure to stick around at eXputer! 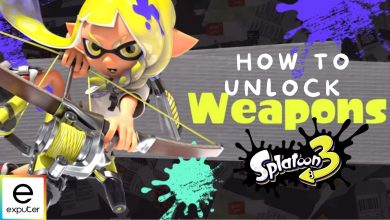 Splatoon 3: How To Unlock Weapons