Splatoon 3 is a third-person shooter game released on September 9th, 2022. It consists of a PvE, a single-player with a solid storyline hidden behind it. At the same time, it also offers players a brutal PvP Multiplayer system whereby players can test out their builds to take down other players. Our Splatoon 3 Best PvP Weapons guide will uncover the top-rated PvP weapons you can use!

Kicking things off with the first weapon, we have the Aerospray MG, one of the best weapons for Splatoon 3. It is essentially the main weapon considered to be a shooter, and it has an insanely high fire rate while having a damage rate that is a bit on the lower end, and the range is on the more acceptable end.

The MG can act as a versatile weapon for players, granting them the ability to use it in turf wars to fill up the ground as fast as possible. Considering it has an insanely high ire rate, it instantly beats down other weapons that might have greater damage, but if they lack fire rate, they will instantly fall back when put against the Aerospray MG.

If you are up against other weapon types, such as a roller weapon, then you can take advantage of the close range since all the player will be required to do is aim the Aerospray at the opponent and continuously fire.

The next weapon in line will be known as the Octobrush, featured both in the original Splatoon and the Splatoon 2 series. It is classified as a roller-based weapon, and it also ends up falling into the main weapon type and is not a special weapon.

While it does not have that much range, it makes up for it in the ink speed and handling it offers for players since both stats will be pretty high up. It will be paired with a sub-weapon known as the Suction Bomb and a special weapon known as a Zipcaster.

If you are using an Octobrush and are faced with a charger, then the best strategy to use for you will be to use stealth to your advantage. Splatlings will be one of the easiest weapons to face off against, but make sure to take your time. Unfortunately, Octobrushes will fall off when faced against sloshers. Do not miss out on our Splatoon 3 Beginner’s guide to know the best tips, especially if you are a newer player just trying to get the hang of it!

Moving on, we have the Splatana Wiper, which will be yet another main weapon. It belongs to the Splatana weapon class, and one of the main advantages that the players in Splatoon 3 will have when they use the Splatana Wiper will be that they will have insanely high amounts of handling points. They will also have a solid range, but the damage output will be slightly lower.

The Splatana Wiper will have the Torpedo as the sub-weapon, and its special weapon will be paired with an Ultra Stamp. When you are wielding it, players can instantly launch fire ink at a fast speed too, and if you manage to press down on the button, it will start charging the hit, which will produce an even more powerful splash of ink.

You will have a clear advantage in accuracy since your splashes will be insanely accurate, allowing you to dominate the other players running against you.

Next up, we have yet another viable weapon called the N-Zap 85, which will fall into the main weapon and be part of the shooter weapon class, which instantly ranks it up, considering shooters are pretty strong in PvP in-game. The weapon’s fire rate will be pretty commendable, while the range is okay too.

The weapon has the Suction Bomb as its sub-weapon while it will hone the Tacticooler as the special weapon. Players can obtain the weapon once they reach level 6; it matches up pretty well with its previous counterparts and allows players to launch their hits at a commendable rate.

The weapon itself can come in handy to take over the opponents in front of you, therefore becoming an instant solid option for players going head to head against other players in battles like turf wars.

Apart from being able to be used as an excellent roller to cover a large area in turf wars, players will also be able to use it as a melee weapon to take players out. After clicking down on the ZR button, players can expect ink to splash out in a short radius, and while the range will not be the highest, it will certainly be strong.

Another weapon you can try is Splattershot, which will fall into the shooter weapon yet again, and will not be a special but the main weapon. Players can get their hands on these Splatoon 3 Best PvP Weapons at level 2, and the weapon will be paired with the Suction Bomb sub-weapon and the Trizooka special weapon.

The fire rate is kept at 60 points out of 100, while the damage output has a pretty commendable 47 points, and as for the range, it falls into 50 points for the player. It shares a newer design compared to its predecessors from Splatoon 1 and Splatoon 2.

The Splattershot weapon can come in handy to take players down with it, and it has a new frame that will add even more resiliency, and players will be able to handle it all too well. If you do not know how to actually unlock weapons in-game, then how will you be able to use them, therefore our How To Unlock Weapons guide will be your saviour!

The Splattershot Jr will be another main weapon that will fall into the shooter class, just like the Splattershot. It will hone a splat bomb as its sub-weapon, while the special weapon will end up being the Big Bubbler.

If you are looking for a higher fire rate weapon, then the Splattershot Jr. is the way to go, considering it will have commendable 75/100 fire rate points while it will have 22/100 damage points and 35/00 range points.

The ink tank that was originally present in the Splatoon 2 has now been removed. Still, players can take advantage of the ZR button and continuously shoot out the weapon over and over until they can gain victory over other players.

Moving on, the next candidate on our list of PvP weapons for Splatoon players will be the Dark Tetra Dualies, a newer type known as the Dualie weapon. For the sub and special weapons that are being assisted with the weapon itself, those will be the Autobomb and the Reefslider.

The weapon provides the player with excellent mobility, racking in a whopping 90 out of 100 points for mobility. At the same time, players will also have amazing range while wielding the Dark Tetra Dualies. The damage output is not all that commendable. However, it makes up for it in the other areas.

Players can perform a certain amount of dodge rolls, being able to dodge the enemy player’s weapon attacks, and after a bit of time has passed, the player will be able to take control over their opponent with ease.

Moving on, the next weapon that we would like to cover will be known as the Dynamo Roller. It is a roller-based weapon and does not belong to the special class but will fall into the main weapon class.

Players interested in the full stats and composition of the weapon itself will come to know that it has the sprinkler as its sub-weapon while it will have the Tacticooler as the special weapon. The weapon’s main winning point will lie in its insanely high range, allowing players to cover a large surface area in a short period.

The ink speed and handling are on the lower end, but it’s almost as if it doesn’t even matter just because of the sheer range that the weapon has.

Another weapon that players can try out if they don’t feel like investing in the other weapon will be the Tri-Slosher; and it will belong to the slosher class of weapons and will have the Toxic Mist as its sub-weapon while it will have the Inkjet as the special weapon.

For its stats, it will have a solid damage output, with the points ranking it at a commendable 75/100, while the handling will be set to 70/100. The range will be a bit on the lower end as it will be 31/100, and players will be able to attain the weapon at level 10.

The Splattershot Pro is a solid option as well, as it is a shooter weapon too, and shooter weapons are known to have immensely good range, allowing players to gain victory easier whenever they are faced with tougher players in turf wars.

The sub-weapon will be the Angle Shooter, while players will experience the use of the Crab Tank as it’s a special weapon. The range will be 70/100 while the damage points will be 60/100.

Coming closer, we have the .52 Gal weapon with us. Yet again, it will fall directly into the shooter category, automatically making it stronger than other classes of weapons offered in Splatoon 3.

While the player has the .52 Gal wielded, they will also be able to take advantage of the Splash Wall sub weapon and the Killer Wail 5.1 Special weapon. Apart from that, the weapon will hone an impressive 75 damage output, while the range will also be acceptable. However, the .52 Gal will lack in fire rate.

If you would rather have a Dualie weapon, then look no further than to using the Splat Dualies, which comes in comparison with another weapon like the Dark Tetra Dualies that we have mentioned before.

It will have the Suction bomb as its sub and the Crab Tank as it’s special while being able to have a high mobility rate, as the mobility points will be set to 60/100, while players will also be able to have a solid amount of range while using the Splat Dualies. Players can unlock the weapon once they surpass level 3.

Last but not least, while the Carbon Roller might be the best of options for players, it is certainly an option. It is a roller weapon with the Autobomb as it’s sub-weapon while having the Zipcaster as its a special weapon.

While it is equipped by the player, they will have a higher handling and ink speed rate, as both its stats are set to 65/100 and 63/100 respectively. The range is slightly on the lower end, but the weapon is more than usable for Turf Wars. With that, we will wrap up our Splatoon 3 Best PvP Weapons guide! You might find our Splatoon 3 10 Things Pl 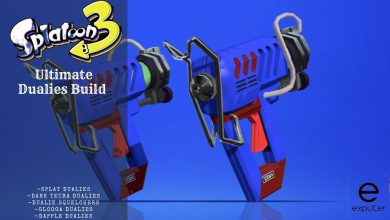