Thymesia is a SoulsBorne-like game with intense combat and many challenging bosses. But some bosses tend to appear in older areas even after you’ve cleared them out. These come under the Sub Quests, and one of those is bosses of God of the Fools. That is why this guide will look at how you can find and defeat Thymesia, God of the Fools.

How To Find God Of The Fools

God of the Fools is a giant optional sub-boss. You can find it in the Sea of Trees area, where the arena will be filled with Cysts (basically poison sacs). Unlike many other boss fights, you won’t directly be fighting against the gigantic boss itself.

How To Beat God Of The Fools

When you first approach the boss, you might be confused as it is far off in the distance. Its attacks can reach you, but there’s nothing that you can immediately do to harm it.

That is because the Thymesia God of the Fools boss fight isn’t like a traditional boss fight. Instead of taking on the boss, you’ll actually have to traverse through the arena to land a single blow that will immediately kill the boss.

However, getting through the arena and the obstacles can be tricky as there are some high-leveled enemies spread throughout the arena alongside various Cysts. So, in the end, the entire fight just turns into how well you can manage mobs of enemies attacking you while trying to clear out a path to the God of the Fools.

The arena is divided into four different floors that you can access by climbing a ladder that’s usually surrounded by a giant poison sac/Cyst. Here’s an overview of what to expect on each floor and how to clear it.

As soon you’re approaching God of the Fools, you’ll see the boss in its resting position, and its health bar appears when you get close to the edge right in front of it. From here, you need to take a left, and you’ll immediately be faced with a Cyst. You can either use your claw to take it down, but the safe option is to use your feathers as poison will build up if you get too close.

As you’re going forward, you’ll get the option to go left or straight. If you want the quickest way to complete the level, then keep going forward, where you can see another Cyst. To the left, there will be a safe area in between the poisonous gas. Dash towards it and take out the three enemies. Then take out the Cyst with your feathers. The farthest left corner will have a ladder that will take you to the second floor.

If you chose to go left on the earlier path, you’d be faced with three enemies. After you kill them, you’ll need to wait for God of the Fools to slide his hand across the floor. Then you can run to the next Cyst, take it down and follow the same path as mentioned earlier. There’s really no tactical advantage of going left earlier; you just get to take down more enemies.

When you reach the second floor, just keep going straight, following the path. There are a bunch of enemies, but you don’t really need to take them down as they won’t chase you too far if you keep running.

Eventually, you’ll run into a Cyst that you’ll need to take out before turning right. There are going to be quite a handful of enemies as soon you turn right; one will be holding a shield as well. You can take them out if you wish, but just like before, you can dash past them.

You’ll be led to the outer perimeter of the Thymesia God of the Fools arena. Over here, the boss can actually land a few attacks on you if you’re not careful. We’ll go in-depth with the move sets in a later section, but its attacks usually end with three punches/slams. As soon as you see those, you can run ahead to try to move on to the next section and away from the boss.

There will be a Cyst at the end of the path that you need to take out and then go to the right. You’ll be in a sort of open area with a ladder that can take you to the third floor. But just like many other areas, there are going to be a bunch of enemies, such as the Flying Dagger Elite, in your way.

However, if you choose to go left, past some breakable barrels, you’ll find another Cyst area. You can take out the Cyst, which will get rid of the poison, and you can find a collectible in that area. But if you’re not interested in achievements/trophies, then it’s not worth going to this area.

The third floor of the boss fight is relatively simpler than the first two. You’ll have to take out one enemy, and behind it will be a Cyst, followed by two more enemies. The platform is smaller, and the ladder is right past the two enemies.

There are no enemies on the fourth floor, but you need to be careful of the holes in the platform. Be careful of the poisonous gas explosions that occur, but besides that, it’s a simple sprint to the end of the platform followed up by execution. After a cutscene, God of the Fools will successfully be defeated.

Although during the Thymesia God of the Fools boss fight, the boss won’t be able to hit you too often, there are 2-3 moves that you need to look out for. That is because, during certain sections, you’ll be on the outer side of the arena where the boss can land hits. And it only takes 2-3 hits to get killed, so here are the moves that you should look out for.

As suggested by the name, God of the Fools will raise its hand and slam it right on top of you. The attack is able to stun you such that it is hard to get out of the way from the next attack if you’re not quick enough. The boss repeats the slam thrice in a series.

The attack is easy to notice but can be quite hard to get away from. God of the Fools will place its hand on the walkway and drag it across to damage anything in the path.

The boss will throw poison onto the walkway, which can kill you in a matter of seconds. If you get caught in it, you’ll likely need to heal in between so you don’t get killed.

The fight with God of the Fools in Thymesia isn’t too challenging, and the only enemies that you’ll actually have to fight are just regular enemies, so you don’t need to alter your build too much. But if you want the best chance or just want to speed-run through the encounter in hopes of farming, then here’s an ideal build.

For the Talents, it’ll be ideal for upgrading your Feathers as you’ll be using them often to take out the Cysts. So, try getting Growing Feathers and Full Winged.

Additionally, as there are many enemies that you can perform execution on, it’ll be beneficial to get Healing Execution to heal up after each execution. Also, consider reading 24 BEST Thymesia Talents guide.

For mobility, Feather Dash can be quite useful as it will teleport to any Cyst that you hit. Getting close to the Cyst as quickly as possible will allow you to avoid taking damage from the poison.

As for the best Thymesia weapons for this fight, there’s a lot that can work in the fight. You can use the Miasma to dodge around quickly throughout the arena. Additionally, Blood Storm can be beneficial for healing in case you run out of potions. Considering the number of enemies that can sneak up on you, Blood Storm can truly save your life.

If you struggle to take on enemies like the Flying Dagger, then you should opt for the bow, as it can make dealing with them a lot easier.

Once you successfully kill the God of the Fools, you’ll be awarded:

With that, you know everything about defeating the God of the Fools in Thymesia. It is mostly just a gimmick fight, and you can get through it with ease if you just rush ahead and avoid any enemies. 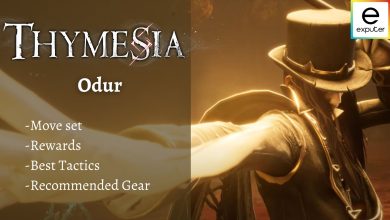 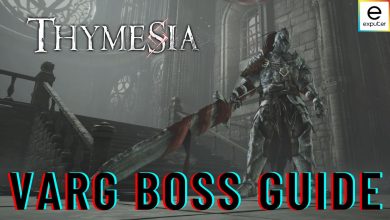