The much anticipated and sequel to beloved Hollow Knight, Silksong might not get any release dates soon. As explained by PR and Marketing Manager Leth on Discord, Hollow Knight: Silksong is in final testing and can be assumed it is fully developed, but that doesn’t follow the pathway to a release date yet. 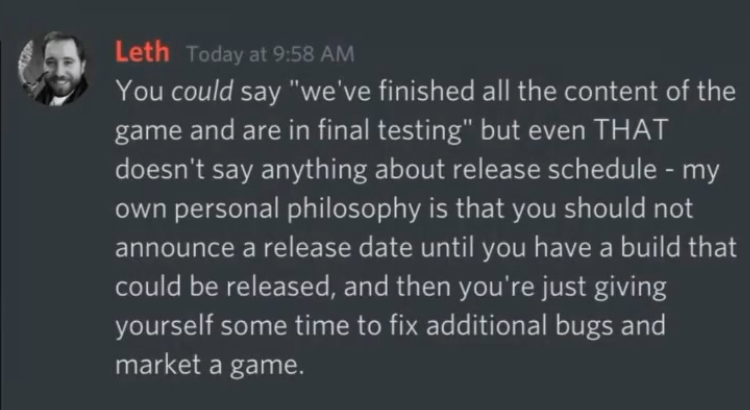 “You could say “we’ve finished all the content of the game and are in final testing,” but even THAT doesn’t say anything about release schedule – my own personnel philosophy is that you should not announce a release date until you have a build that could be released, and then you’re just giving yourself some time to fix additional bugs and market a game.”

This is an interesting take and approach by Cherry Games, and hopefully, this results In a bug-free game that has zero problems. We saw this matter with Cyberpunk 2077, which was rushed and then lost its reputation due to an insane amount of bugs and other unplayable relevant problems.

We predict that Hollow Knight: Silksong will release in the coming months. There are two factors to support this. Firstly, as confirmed by Marketing Manager Leth, the game is in final testing, so there isn’t much to worry about. Moreover, Team Cherry also told Edge Magazine that they were working on a new title, which would only be possible for an indie studio if they aren’t occupied with another game in preset. You can also read more interesting things about the game on this Reddit thread.

Update: Apparently the statement had a different focus and wasn’t in the same meta as Silksong.