PC Gamers must be happy with how much games are priced across many stores. On the other hand, Console fans aren’t entirely happy with game prices, as many reports now indicate that games will now cost up to $60-$70 on next-gen consoles. This news originated from NBA 2K21 price when 2K announced that their upcoming NBA game will cost $69.99 on PS5 and Xbox Series X. Since then, many rumors have suggested that other publishers will also follow 2K footsteps and increase game prices for the next-gen consoles. Luckily, for PC Gamers there is no such news and to be very honest. Every PC Gamer should be really grateful, not because of how significantly cheaper games are. But, how many options we have while buying games.

Game Marketplaces are really the best of options when it comes to buying games at a discounted price. Most game marketplaces work like eBay, where there is a certain seller who sells you the key. The keys dependable on the game, are redeemable across all platforms. Like eBay, there are dozens of sellers selling the same game. Now it all depends on you, from whichever seller you buy. Each seller has his own store and has reviews, so there is little risk of being scammed. Besides games, you can also buy Window Keys, Game Subscriptions, Gift cards, and many more things.

Other than this, the game marketplaces have a very fluent way of buying games. You simply purchase the game online, and you get a digital code to redeem it. The process is very convenient, and the amount of money you save is ridiculous. While writing this article, I gave a quick look at the very popular marketplace G2A. I just saw an incredible deal that features No Mans Sky for just 13.79 Euros. At the same time, I checked its price on Steam, and the difference is huge. Take a look at it for yourself.

Game Marketplaces always feature exotic discounts, and buying games from them can be extremely cheap. However, like everything that has downsides. Game Marketplace isn’t 100% authentic. In our article about game marketplaces, we discussed its history and how many scams have been associated with them. Likewise, we also talked about game-reselling and many more things which have contributed to its reputation.

Subsequently, we reached to the conclusion in which Martin Bell explained techniques through which you can avoid getting scams. Other than this, he also made an excellent point saying that thousands of deals go through game marketplaces, and the number of scams is like one in a hundred cases.

Humble Bundle is a very authoritative store for video games. The store allows players to buy various bundles, and each of the bundle features discounted games for a good cause. Most of these bundles are sold to raise money for various charities. For example, recently the money raised from recent bundles was used to buy medical equipment for many needy hospitals across the world. Other than this, they were heavily involved in the Black Lifes Matter campaign, in which they gathered dozens of money for struggling black indie game developers. In short, when you buy games from the Humble Bundle, you buy it for a good cause.

So how does Humble Bundle Work? Well every month, there are dozens of exclusive bundles. The bundles provide you with an option, to pay either $10, $20, $30, or maybe more depending on the games. The more you pay, the more games you get. What’s fascinating about the Humble Bundle is that the games are really cheap.

For example, I was checking today’s featured bundle on the website and found numerous games from Bohemia Interactive. The bundle consisted of Day Z, Arma, Taken on Mars, and many more games all for just $30. The original price for all these games together was $318, which makes up a huge difference. Humble works directly with publishers and all its games are redeemable on Steam. 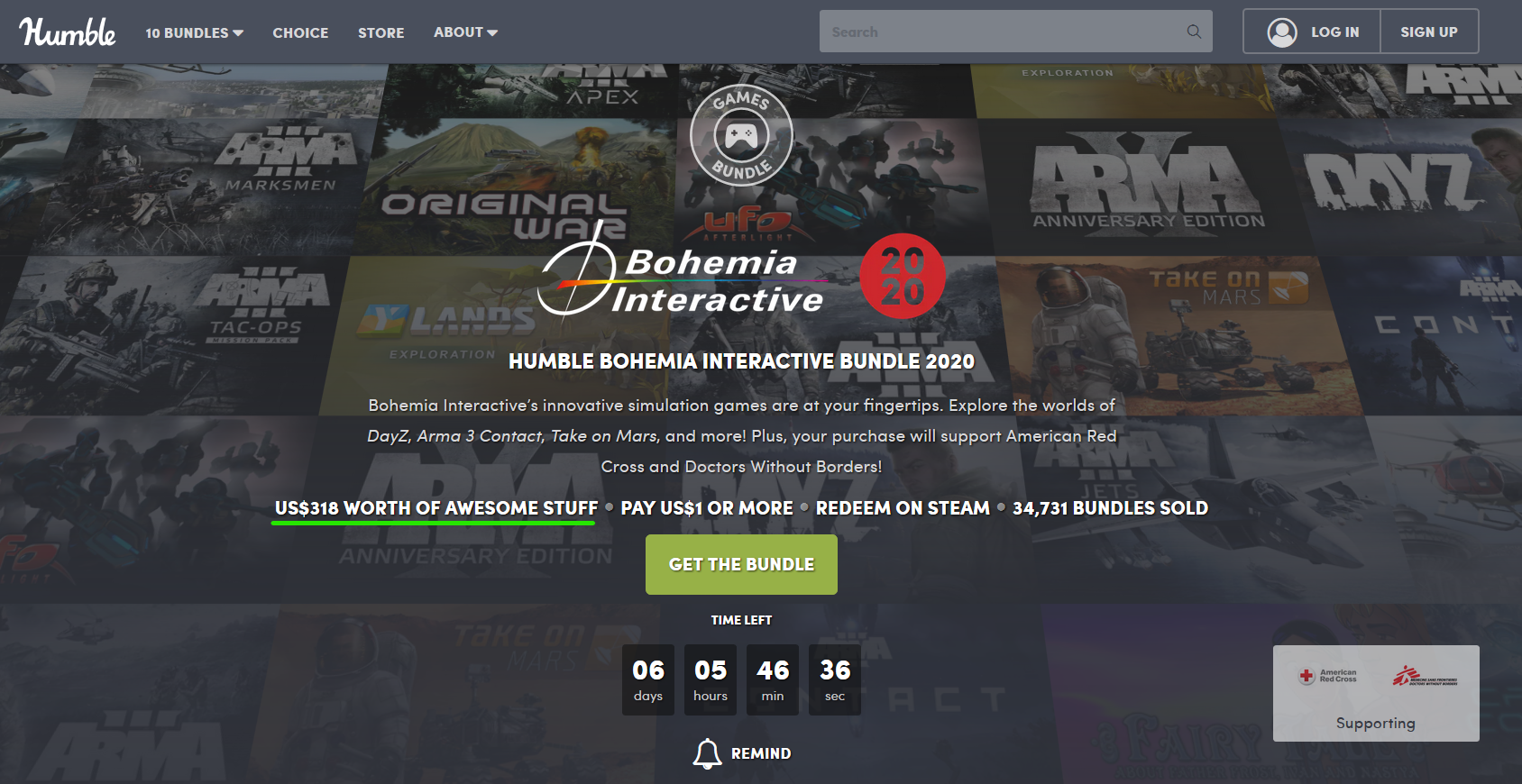 Other than these insanely discounted bundles, Humble Store is always involved in giving away free games. If you want to stay updated with their free giveaways, simply go to their website and enter your email in the newsletter. 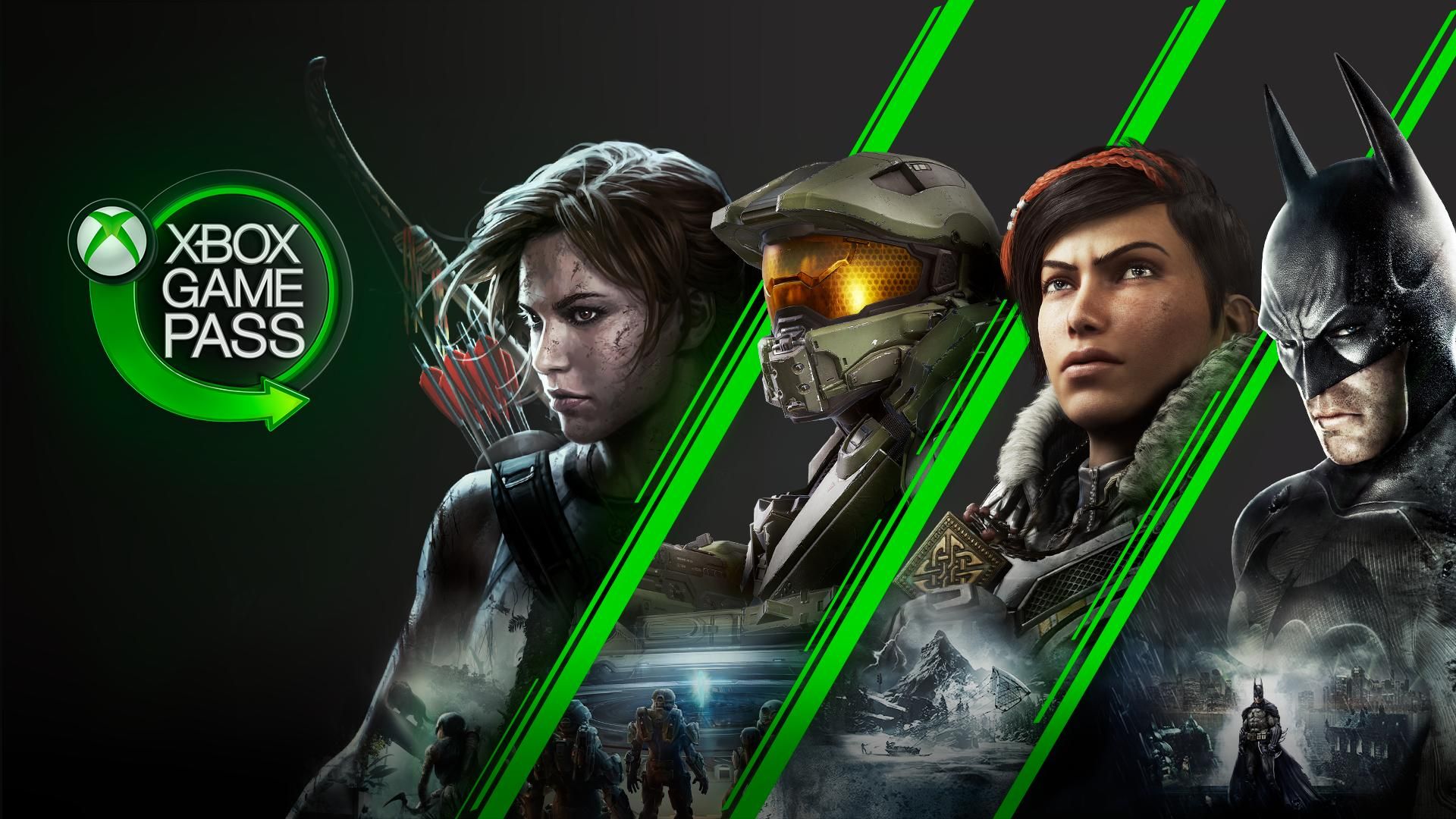 Many people won’t like seeing Xbox Game Pass here since its a subscription-based service. However, when we reviewed Xbox Game Pass in-depth. We made some calculations which clearly indicated that Xbox Game Pass isn’t only the Netflix of Games. But it’s a really good option to get games on a high discount.

If you don’t know. Xbox Game Pass is a subscription service from Microsoft that allows you to play up to 200 titles in just a monthly fee of $9. The monthly fee is often discounted, and right now it is available for just $4 only. There is a range of titles, and all of them consistently change, which is sort of a drawback. There are no assurances your favorite game will be available next month. However, on the bright side. $9 is nothing when you get to play expensive games like Forza Horizon, Doom Eternal, and many more latest titles.

Further, the Xbox Game Pass also allows you to cancel the subscription at any time. Not only that, but your progress is always saved, and once you get the subscription again. The games continue from the same place, which is pretty awesome. Thirdly, the games can also be downloaded allowing you to play them offline.

Now if you are a casual gamer, who isn’t a big fan of multiplayer games, and likes to rock and roll. The Xbox Game Pass is the best option for you. You get to play dozens of games under $9, that you wouldn’t normally get. Other than this, there are massive giveaways and discounts for the members. In addition, there are high chances that you might end up paying less than $9, which is literally nothing nowadays. The most important feature of the Xbox Game Pass is that If you somehow decided to purchase a game from the catalog. You can always get a 20% discount.

Getting Games completely free is all luck and awareness. If you really want games completely free, and I mean games that are legal with proper support. I’ll highly recommend everyone to keep an eye for free games news. You can keep up gaming magazines because everyone is writing an article if there is a free game.

Nowadays, Epic Games Store is giving away games left and right. They have been doing this since last year, and so far they have given away some incredible titles. We are talking about the likes of Assassin’s Creed Syndicate, GTA V, and Just Cause Games. Players who subscribed to game magazines or were consistently reading news were able to grab all the games.

Other than Epic Games Store, many other sites like Humble Store and GOG also giveaway games completely free. The majority of these free games are redeemable on Steam. Only Epic Games Store Giveaways are restricted to their store only.

Lastly, you can also check on the 10-year-old Free Games subreddit, where people consistently share links of free games. The subreddit is very active, and you’ll find 5-10 free games nearly every week. Make sure you have a reddit account, and you have subscribed to the link. I was just going through the sub-reddit, and found that Clay Game is free on Steam. That was fast, time to grab it! 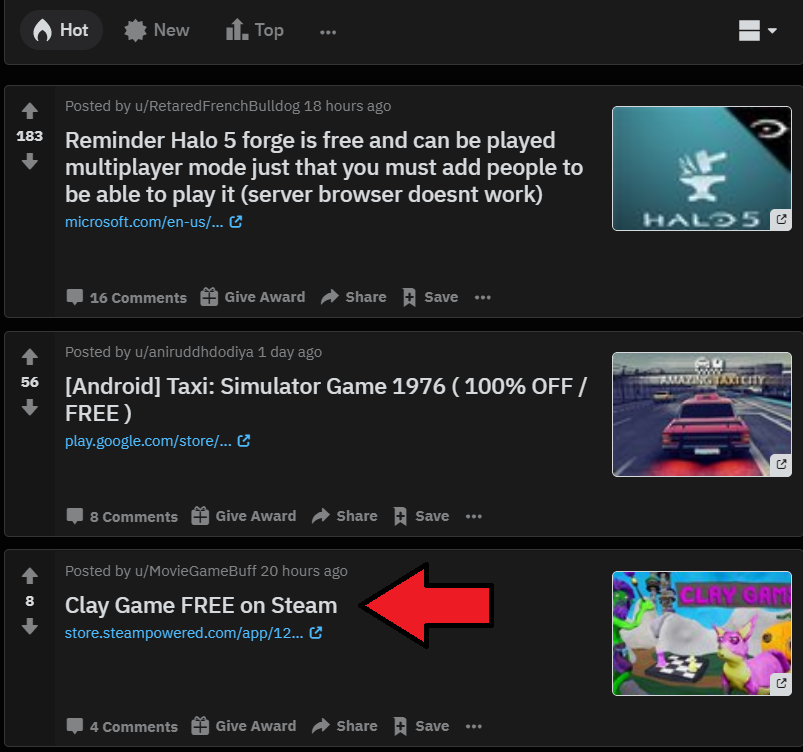 Keep Up With Sales

Now Apart from knowing Xbox Game Pass, Free Games, and Game Marketplaces, there are Sales that you should always be aware of. It’s not hard to know when sales on platforms like Steam or Epic Games Store start. All you have to do is just start saving some money, and predict when the sales will happen. Usually, the sales happen around yearly events like Haloween, Easter, Christmas, Black Friday, and many more. In addition Summer, Autumn, and Winter Sale also happen yearly.

Now the sale dates vary on Steam and Epic Games Store. However, at the end of the day, there isn’t a huge difference, because these are general sale events every year, and every e-commerce store is having a discount of some sort. From my personnel experience, the discount on games in these events is huge. Last time, I was able to grab the Just Cause Franchise at a 90% Discount and to be very honest with you.

Every other popular game on Epic Games Store and Steam is featuring up to 50% discount in these sales. Here are the dates, you should note down.

Tip for Steam Users: You Can Always Head over to the Steam Special Tab, and regularly find games on massive discounts. While writing the article, I gave it a look and found Battlefield V and Grand Theft Auto V on -50% Discount. 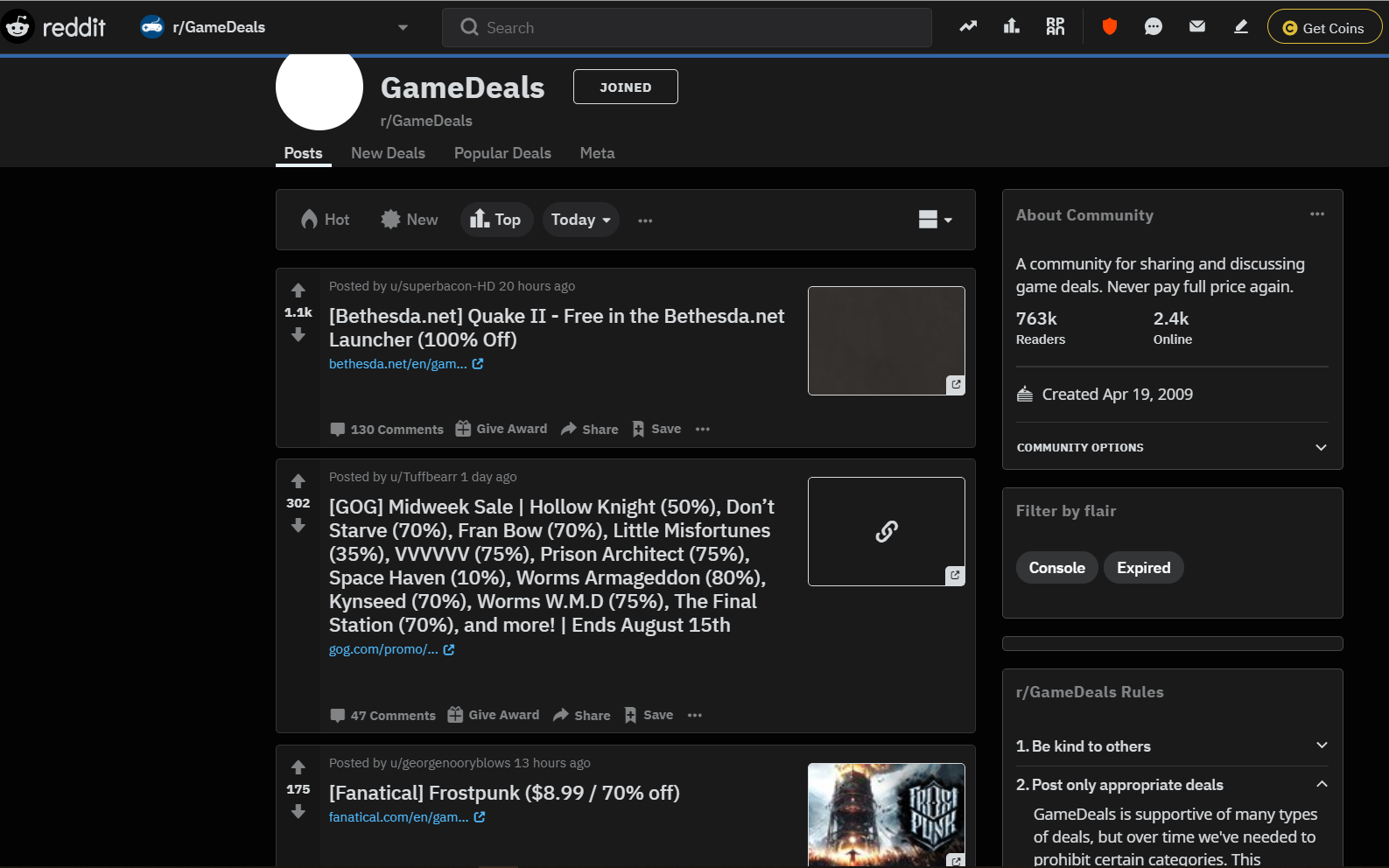 The most helpful forum is the Reddit Game Deals subreddit. This subreddit automatically gets updated with all sorts of deals. I consistently check this subreddit for potential deals that are worth grabbing. The most beneficial feature of this subreddit is that nearly all deals are authorized. This means that you won’t find deals from third-party websites that are filled with scams and re-sellers. The majority of the deals are from trusted stores like GOG, Steam, Epic Store, Greemangaming, and many more.

Apart from regularly finding games at decent discounts. Reddit GameDeals also gets submissions related to free games. Very recently, I was going to bed browsing Reddit, and found two games that were free to grab. These two games were the F1 2018 and Witcher 1. 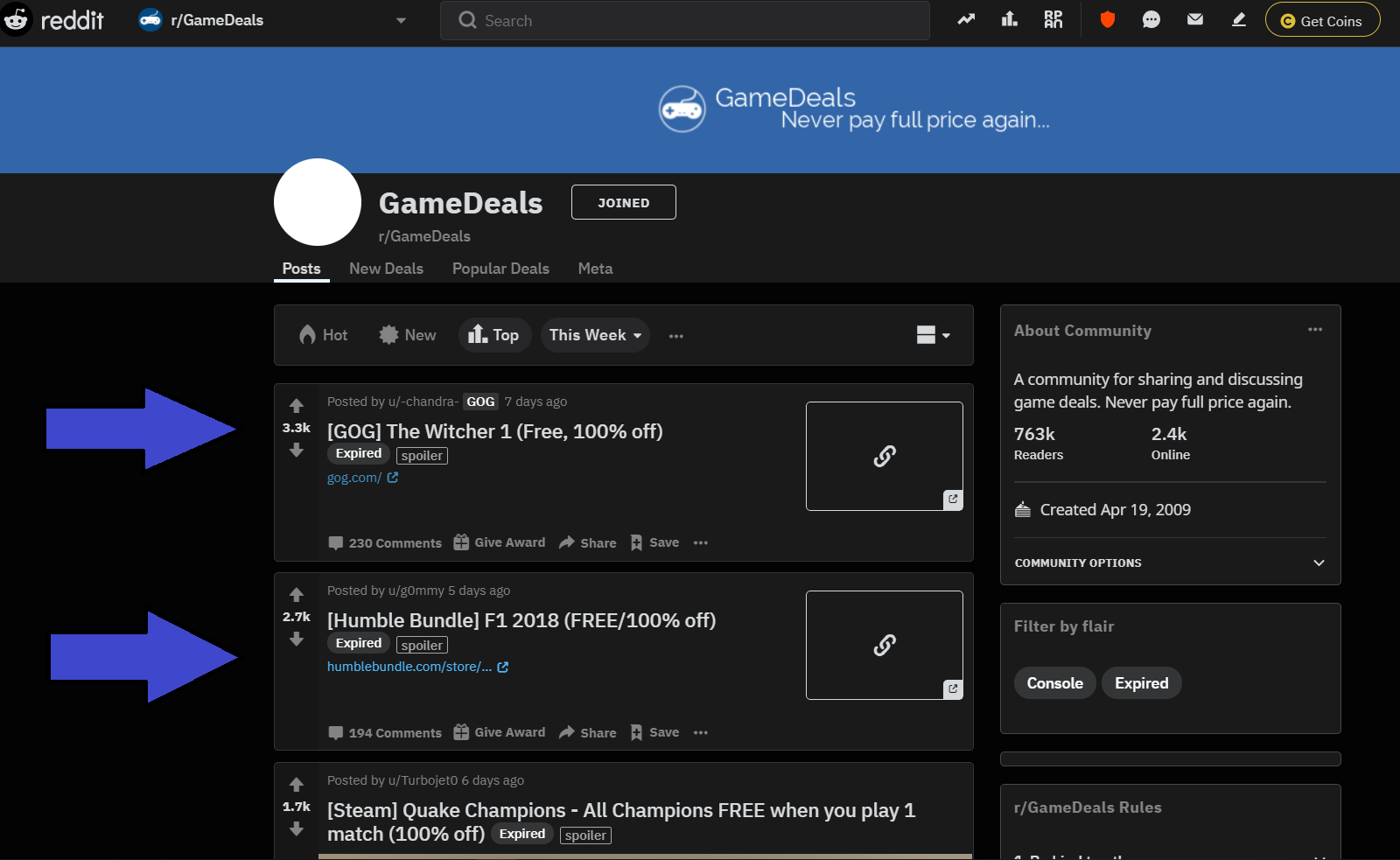 To conclude, if you regularly want to stay updated with games at a discounted price. Make sure you have created a Reddit account and subscribed to this awesome subreddit. The deals are always from popular sites, and no grey stuff is involved.

Games on Discount and Free

To end the guide, I’ll say that getting games on a high discount and completely free is no magic luck. It requires awareness and nothing else.

All you have to do is just follow these certain steps, and I can guaranty that you’ll be getting a lot of great deals along with freebies. Moreover, keep yourself updated with gaming magazines, where you can find news related to free games. Secondly, also subscribe to these subreddits and continuously check them to find discounted games. Thirdly, make sure you give a read to our Xbox Game Pass and Game Marketplaces guide before you go on to purchase anything from them.

Lastly, avoid going for cracks and pirated games. These types of things aren’t legal and most of the time you will end up downloading viruses. In addition, when you purchase games legally you are also supporting developers. Hence motivating them to make more and more awesome games.