Despite Epic Games Store’s massive growth and giveaways in recent months. PC Gamers for some reason still prefer buying Games on Steam, and I think there are many features that completely separate Steam from Epic Games Store. Firstly, I think that user reviews on Steam are a really important aspect of its success. Other than this, the interference is very simplistic, and it is not too dark. Thirdly, I think that trading and Steam Communities bring a lot of joy and value to users. Now if you are one of those newbies to PC Gaming, and want to get going with Steam. Make sure you read everything mentioned in this article because this will help you with the following things.

Now without any further wait, let’s jump to the details.

The most common and hesitant question while buying game users think of, “Is this game worth it?, should I buy it?”. Well, there are numerous methods through which you can really get to know the game, and it can help you get over these thoughts.

Firstly, there is the Steam refund system, which In my opinion isn’t so safe. The Steam Refund System allows you to refund the game within two weeks of purchase, only if you have played the game less than two hours. This is the biggest issue here. The majority of gamers do not look at the time while playing, and knowing such a specific threshold exists is really shameful. Sometimes new games are downloaded through In-Game Client, and Steam counts those downloads hours as playing time. Therefore, you go well past the refund time, without playing it.

Now if you are a person with discipline, simply go with the two hours threshold and give the game try. Make sure you close it before it exceeds the playing time.

Secondly, there are Steam Reviews that can give you a deeper look at the game from a player’s perspective. These reviews aren’t paid like the majority you will find on YouTube and many other sites. These reviews are given by the players who purchased that specific game. You can see the reviews by simply opening that game’s listing, and scrolling down to the review section. Here are the Reviews for Battlefield V, which was recently added to Steam. 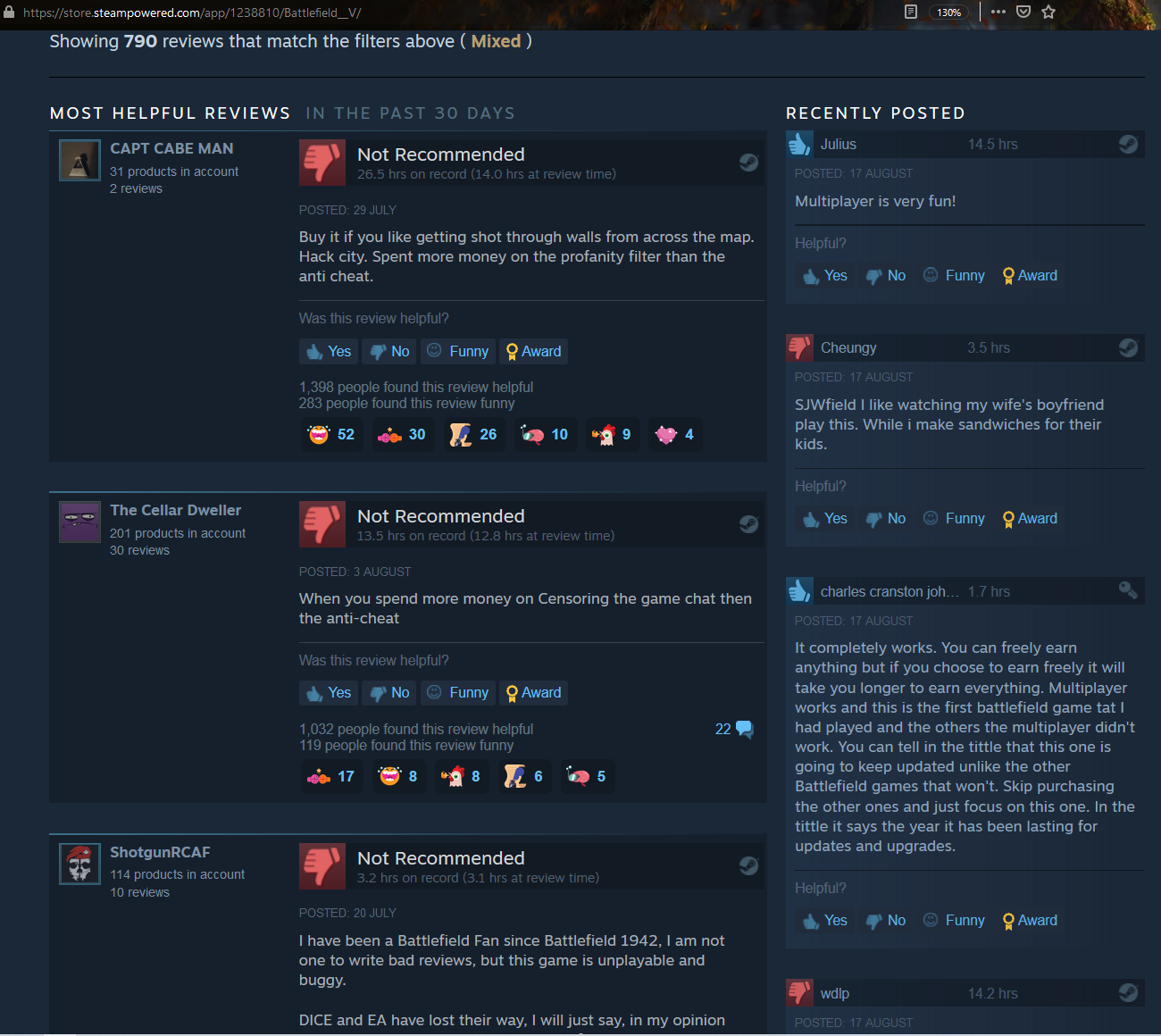 Through these reviews, you can find the positive and negative features of the game. I personally only go with games that have Reviews Rating above Mixed. The ones that have at least “Mostly Positive Reviews” can be considered as an entry point to good games. Here are the Steam Review Rankings.

Note: If the game has mixed reviews, doesn’t necessarily mean it’s bad. You have to look at the reviews, mostly there is optimization and bugs issue which are fairly normal for new games. With the passage of time, everything gets well.

The Witcher 3 one of the best games to be ever released, featuring the highest-ranked review status, “Overwhelmingly Positive”. 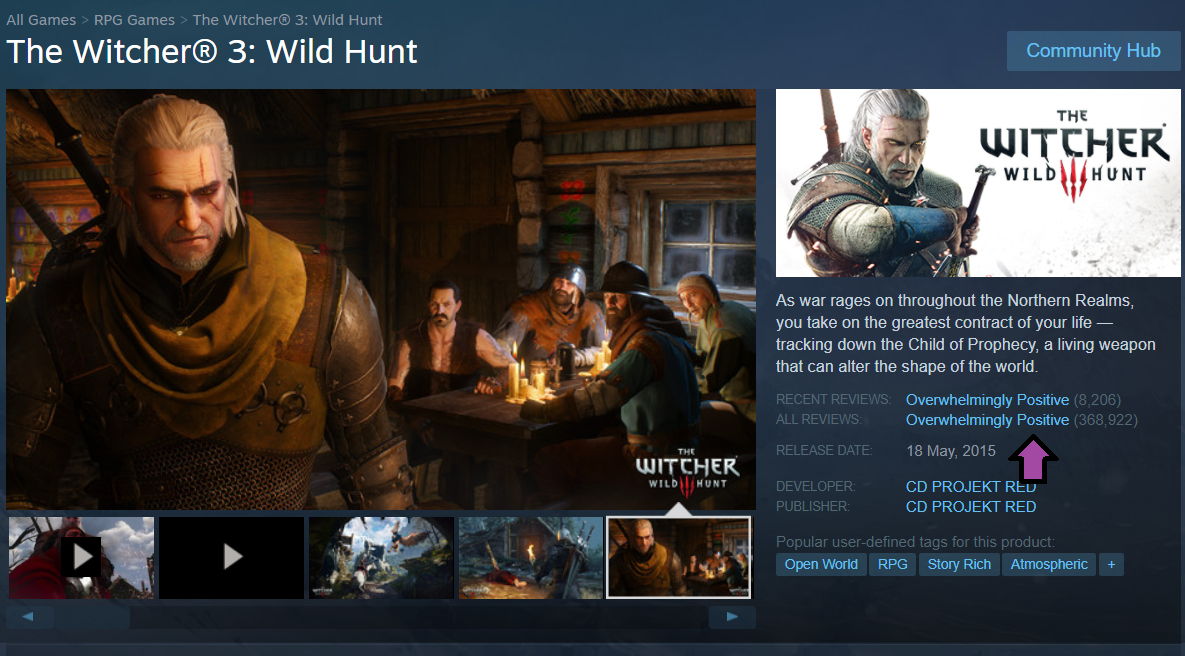 Thirdly you can also get to know a lot about the game through Twitch Streamers or YouTube Videos. This will allow you to get further insight into the game, and based on gameplay you can decide if it’s worth it or not. Lastly, also ensure that the game is getting new updates and your PC can cope with its system requirements.

The most common question is how do we buy games on Steam in Cheaper Price. Well, I won’t lie but some months ago there were many region methods through which you could have gotten Steam Games at a really cheaper price. However, with new policies and updates. The older methods no longer work. Anyhow, we still have those classic available options that can get us Steam Games at Cheaper Price

The first method is of course Steam Sales. When buying a game, always take a look at sale dates, and see if you are near to one. Subsequently, if there is a sale in the future. Never buy the game at the present moment, and save more money. In Steam sales, there are massive discounts and just to give you a perspective. In Steam sales, you can buy two games instead of one at the same price. Other than this, Steam sales also feature discounts on many bundles and DLC”s. Here are the Steam Sale Dates, that you should always consider before purchasing a game.

Now other than Steam Sales. There is also the Humble Bundle option through which you can also get dozens of titles at cheaper prices. If you don’t know, well Humble Store or Humble Bundle is a website where every day there are dozens of game bundles from specific publishers, comics, and audiobooks on sale. Most of these bundles are sold to raise money for charity.

Guessing from this, you will get an idea that games are extremely cheap. However, there are drawbacks as well. Most of the games are Indie and there are very low chances you get to buy games like GTA V or Assassin’s Creed Odyssey. Other than this, the bundles are different every week and month, so it’s all luck. On the bright side, I can assure you that prices are cheaper than ever. Games are easy to purchase and redeem on Steam. You also get to choose from option, where you can pay any sort of amount and get related games from the bundle. Lastly, everything at the Humble Bundle is legit, so do not worry. 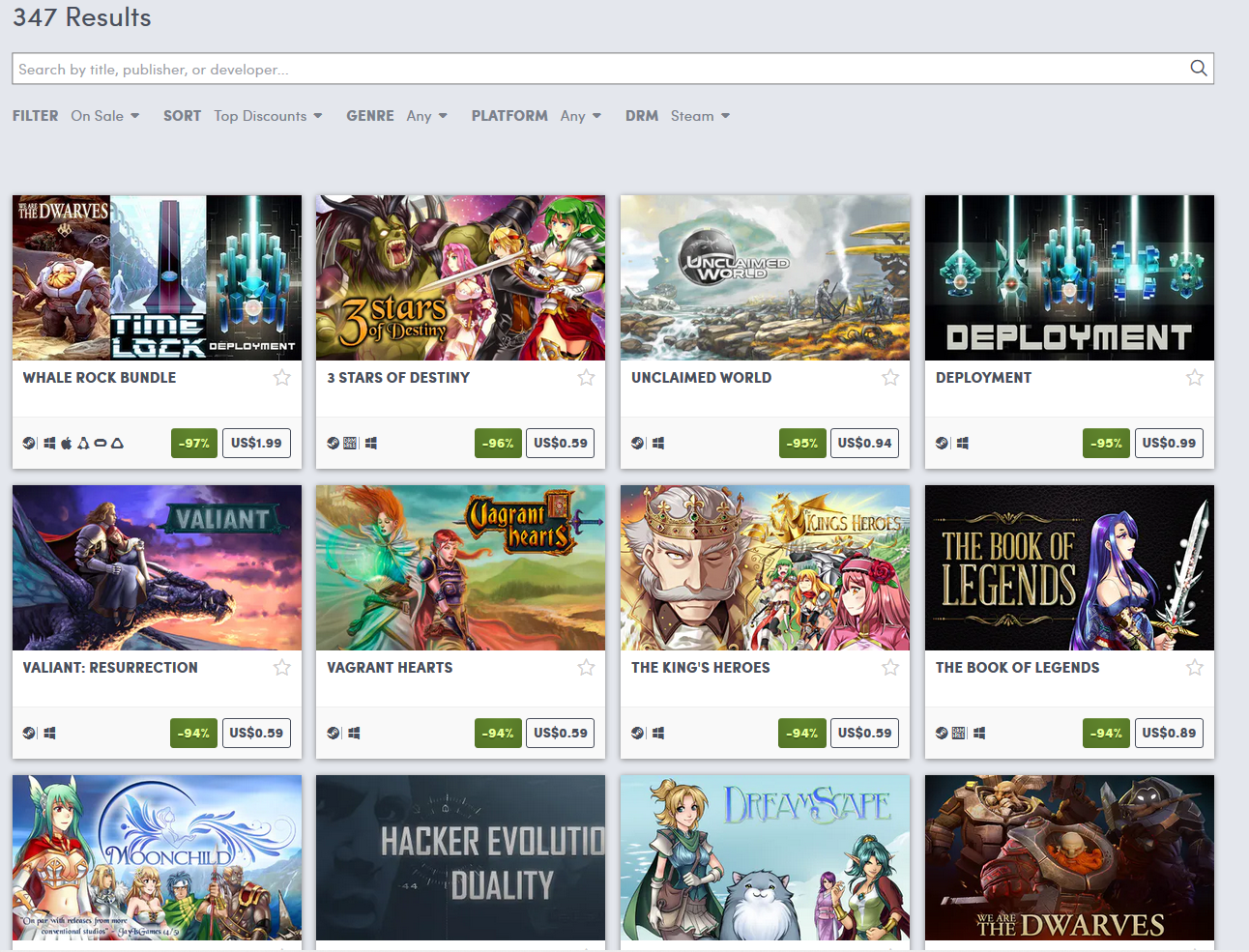 Buy Games from Other Retailers and Marketplaces.

Other Than Humble Store, and Steam Sales. You can also buy Steam Games at a significantly lower price on either game marketplaces or retailers. The difference between Marketplace and Retailer is that the games being sold on Marketplace aren’t entirely authorized and legal. On the other hand, Retailers are often authorized and are allowed to sell the games. Game marketplaces are like eBay, where you can re-sell something.

If you want to buy cheaper steam games, get them from game marketplaces like G2A, Gamivo, Eneba, and Kinguin. However, before you jump to the store and get those games at 1/5 of the original price, make sure you have given our game marketplace guide a read.

Game Retailers like Greemangamng and 2game are also a good source for purchasing games. These stores often have games at cheaper prices than Steam. Along with that, they also feature numerous sales and deals that have different timing in comparison to Steam. While writing this article, I was browsing through green man gaming, and look at these awesome deals. 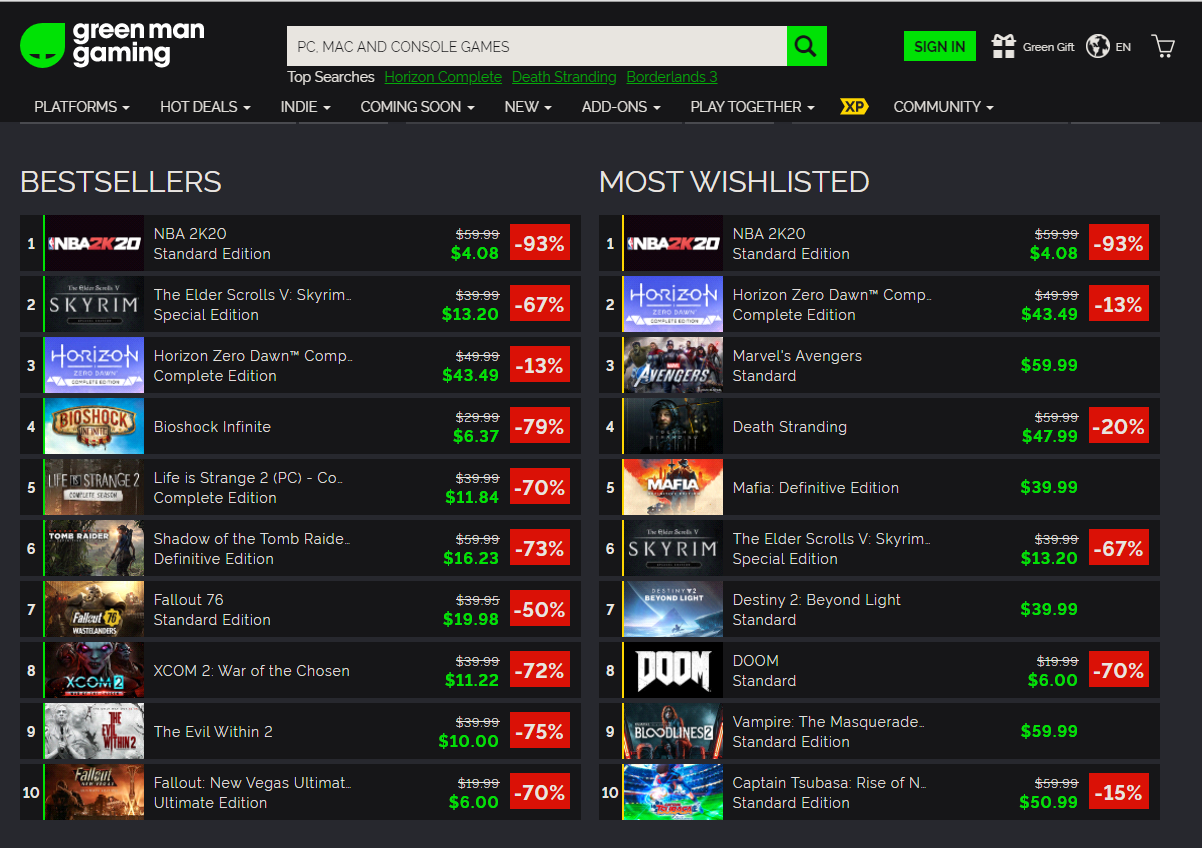 Just to let you know, that steam games on marketplaces and secondary retailers are cheap. However, you must realize that these sellers do not provide any refund once the key is activated on Steam. Therefore, before you go on to purchase a game, make sure you have read our guide’s first section.

How To Explore Games on Steam

Usually, this isn’t a big of a problem, but if you are a newbie to PC Gaming, and you are having trouble finding games in the Steam Store. Just simply open the store, and from there you can navigate through these various tabs and explore games. Most of the time, you can use the Search Box In Steam and Find the game you are looking for. Just note that these days Epic Games Store is getting access to all sorts of Exclusives out there, so some new titles might not be available.

Once you are done with your purchase decision, and afterward, you have gotten the game on decent price. It is time to get a few things straight about downloading games on Steam. Firstly, there is no advanced thingy or any gimmick involved. All you have to do is after you have redeemed your Game. Go To Library > Home, and from the list choose any game you want. 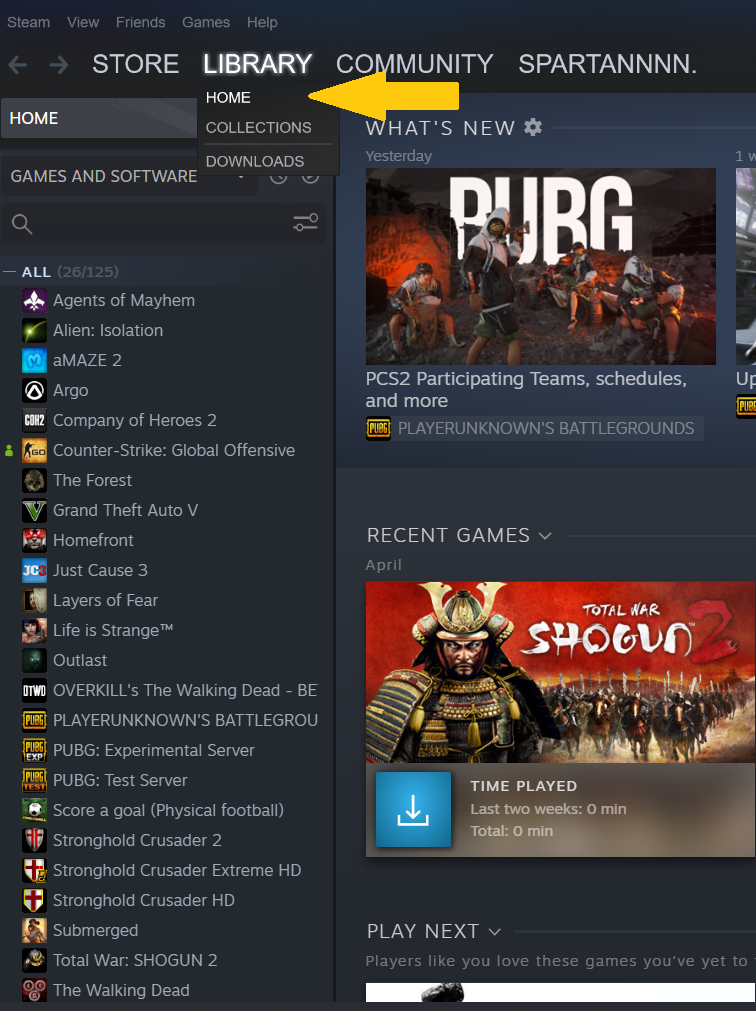 Now Click on Download Button and the game will begin downloading. The games download from servers, therefore if your PC Suddenly closes, you will be able to continue from the last spot. 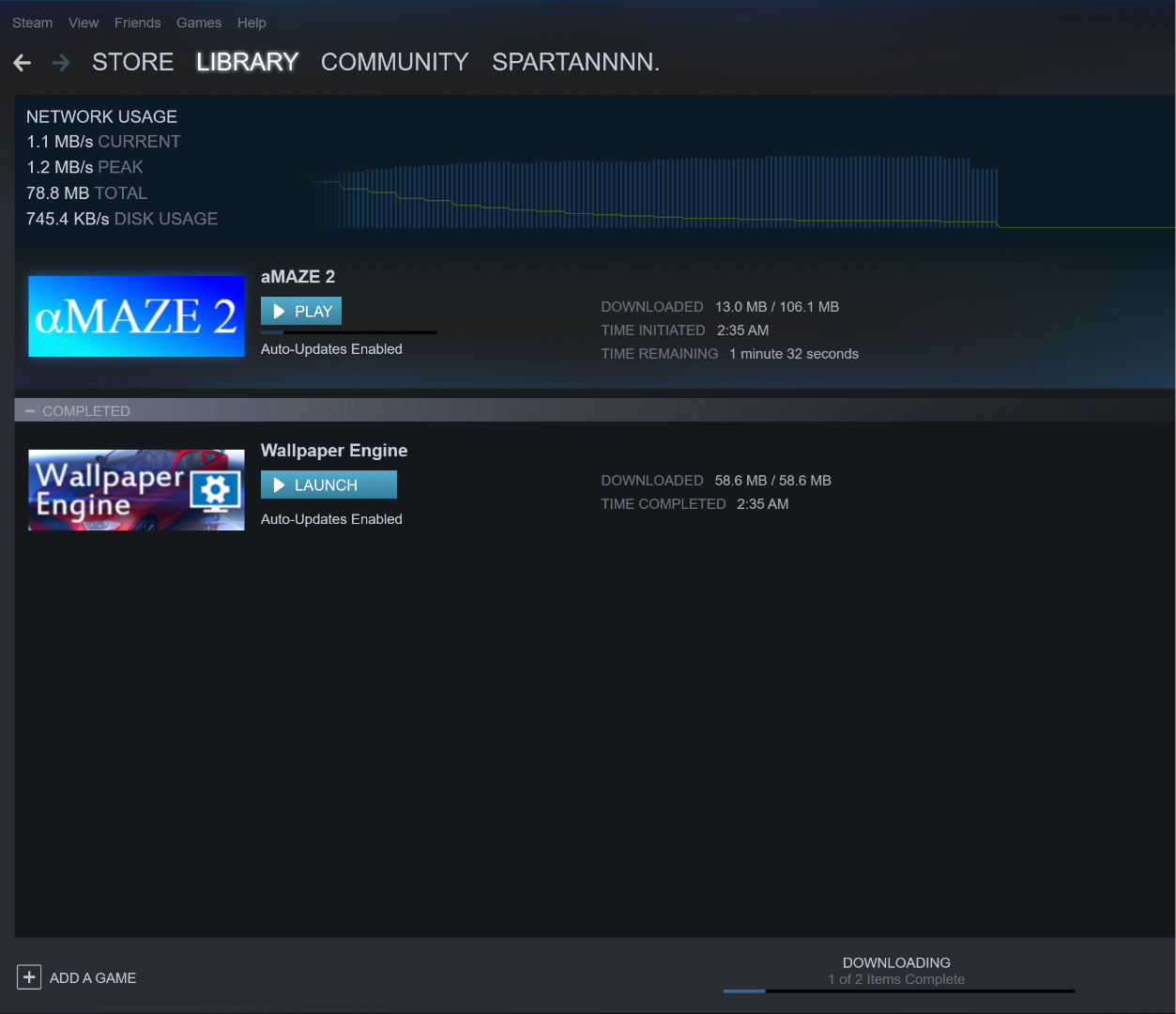 One of the most heavily criticized features of Steam is that it does not allow you to add friends on new account. Along with this, there are also more limited features with new accounts, such as accessing community, groups, buying skins, and many more. According to Valve, this feature prevents spammers from joining their platform, thus the community remains clean.

Now in order to get full access to Steam and its features, you must spend at least $5.00 within Steam Store. You can either purchase a game on the store or simply add a $5 Wallet to your account. Once done, you can access the following features.

Adding Friends: you can add anyone between the game or after the game by searching their name. Players who you add are going to appear on your profile, and you can chat with them, make groups, send gifts, share gameplay, and do a lot of things. 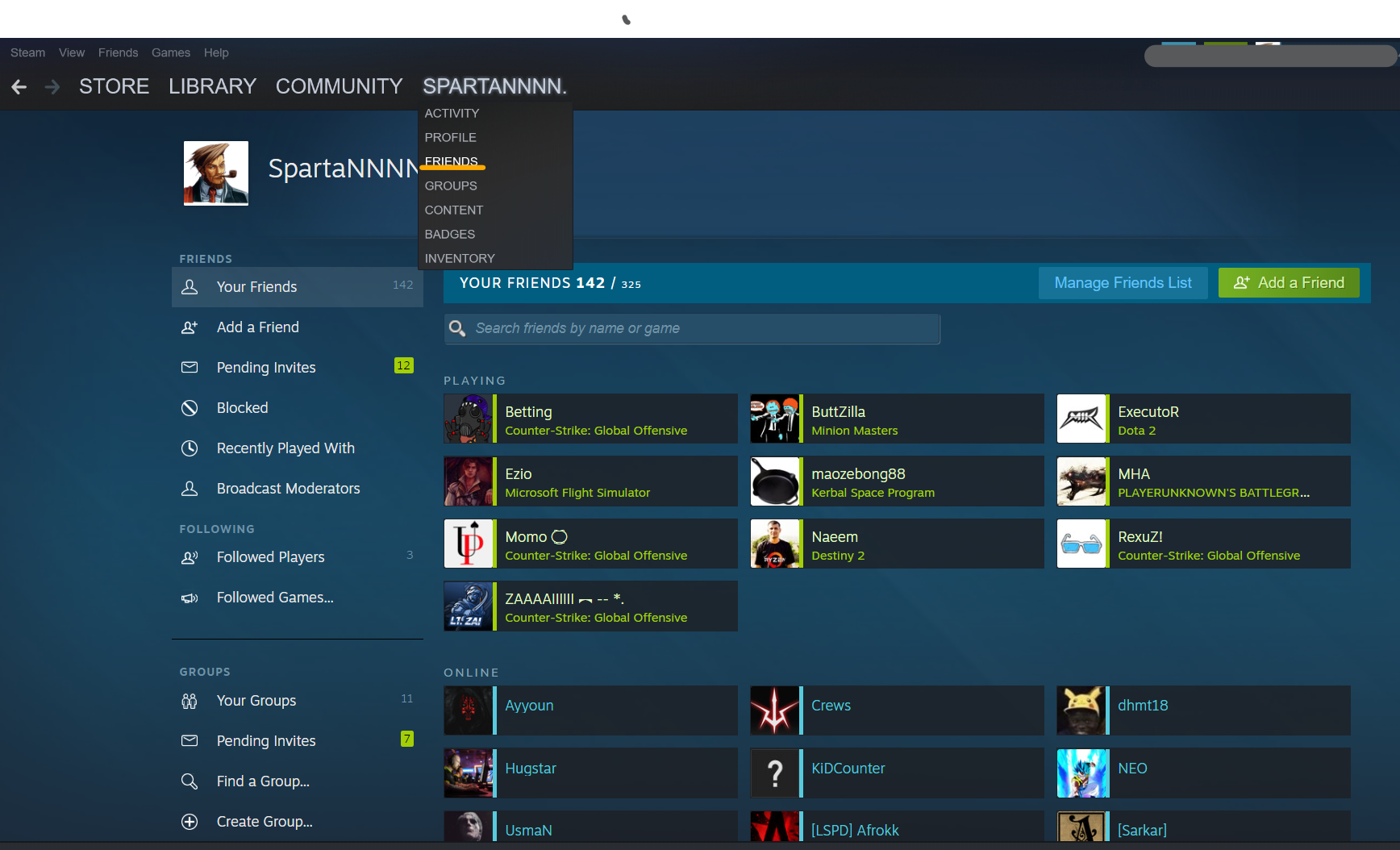 Other than this, you also upload screenshots, videos, make groups, sell/buy skins, manage inventories, edit profile, upload artworks, leave reviews, and much more. Simply go to your profile, and you will see a lot of the basic data.

Steam is fairly very easy to understand. I think that Steam is perhaps the most important video game service on PC. Without Steam, I don’t know what gamers would be doing. Maybe buying one game from Origin, Second from Uplay, third from Riot Client, and maybe fourth from Bethesda Net.

On the other hand, Epic Games Store is now also working its way to the top and one day it might challenge Steam for the leading digital store. For now though, if you are going to join PC Gaming Community. Make sure that you are starting with Steam and hopefully this guide will help you get started with purchasing games on Steam.