Since the very first mission in Red Dead Redemption 2, you notice the importance of money and as you progress in the story and dwell in its missions. You think of ways on earning faster money.

Although, the game from the very beginning will teach you basics like hunting or robbing trains. But still, If you are new to the game, you should know that along with these common practices, there are some other incredible ways too. Our guide rightly jumps in this discussion and will help you teach dozens of methods through which you can earn faster and easy money.

But before we do that, first we shall know why money is important in Red Dead Redemption 2.

Why Money Is Important In Red Dead Redemption 2

Now that we know what are some of the things we can do with the money in Red Dead Redemption 2. Let’s look forward to some consistent practices.

The number one as always will be hunting. Just like Far Cry games, Red Dead Redemption 2 also allows you to hunt various animals. These animals and skins can be sold at fences. On average, each carcass will get you $5-$8. There are some more brilliant methods as well. For example, you can search for Legendary animals, and those would sell for much higher. I find hunting exotic birds to be much easier. You can easily find breeds like Heron, Crane, Pelican, and Spoonbill. The good thing about birds is that you can carry lots of them at a time. They sell in a range of $10 to $15. Most of the time, you will find these expensive birds across North of San Denis.

Other than birds, just always hunt any animal you see. Be that a skunk or muskrat or even a deer. Just grab their pelts in your satchel and they will always get you some sort of money. Just to clarify, whenever you go on for a hunt. There is one important thing you should know. Firstly, there are three types of pelts, and all are represented by their stars. Always look for three-star pelts, because they are going to get you the highest amount of money. Now you might be asking how do I know the pelt level? just simply use your binoculars and the stars will show on the bottom left. 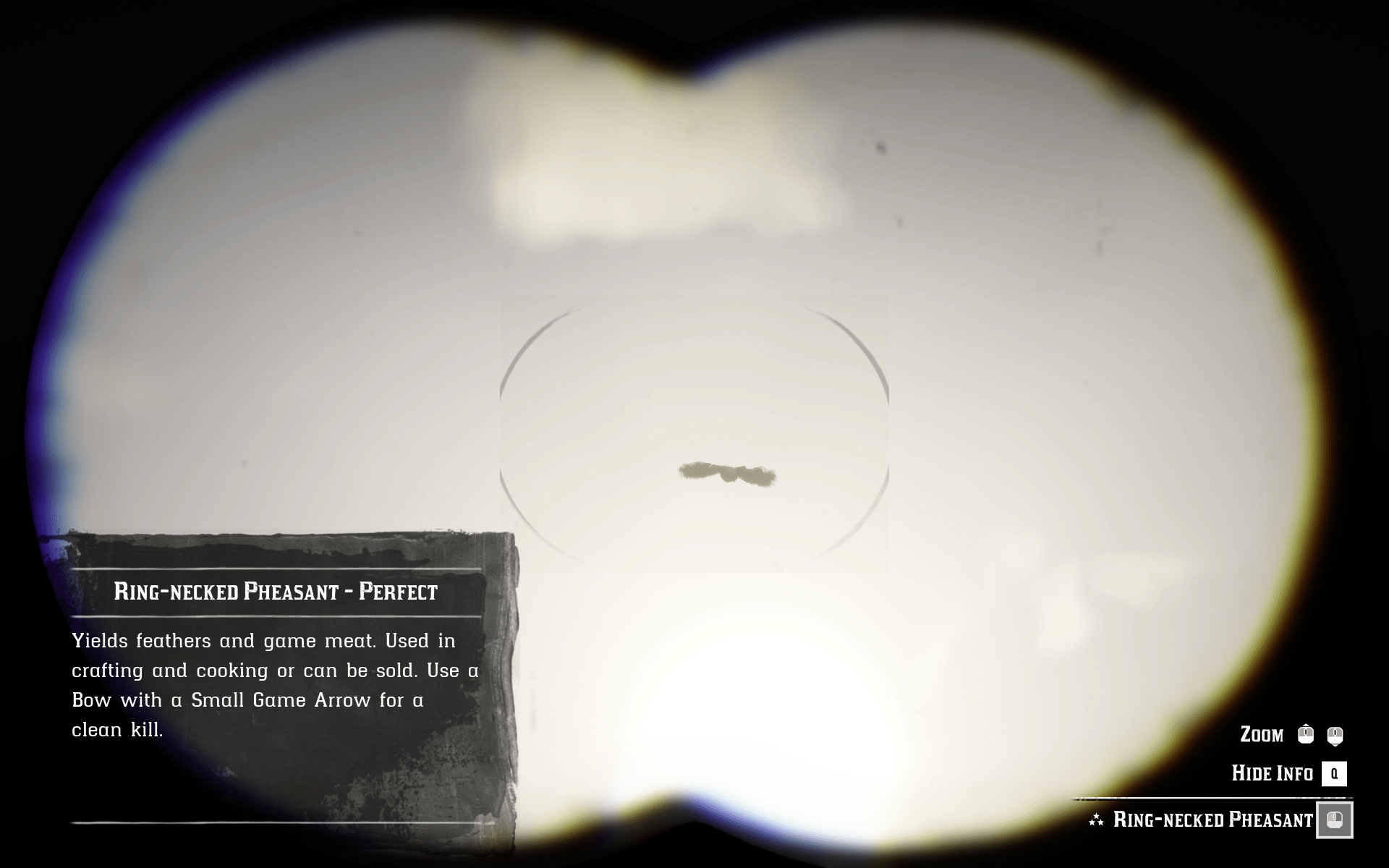 As you go on your hunting journey. There are two things you should keep in mind. Firstly, never use a shotgun or any heavy rifle on small animals. They will explode and you will get nothing. I recommend using a bow and Varmint Rifle for small ones. Likewise, use some heavy-caliber rifle for heavy predators like Bear and Alligators. Don’t worry much about Legendary animals, since their pelts are impeccable. Another thing to know about pelts is that if you shoot an animal ten times. Its palet will lose quality. As a result, you will only get a few bucks from it. When hunting, go for the head, nice and easy.

Another easy and quick way to make money in Red Dead Redemption 2 is through Selling Horses. Some people find this boring, but trust me, it’s really fun. Sometimes you will find great horses in the wild, and other times you will just gather dozens for a decent sum. So the way it works is that you have to locate some horses in the wild. Afterward, lasso them, and bring them to the Stable. There is a unique trick through which you can bring countless horses at a time. Most of the horses go for an average of $2. Good breeds go higher, and it all depends on whether the horse is stolen, brought, and most importantly its stats.

Pro Tip: Whenever you see a merchant or caravan, steal its horse. There are good horses in town too, but it’s hard stealing.

Although a lot of players wouldn’t call this method easy. I think it’s worth the extra effort. Usually, most players don’t know how to rob a train. they die while jumping on the train, other times they get into a cargo only. The best way to rob a train is to first ensure that you are going on a passenger train. Afterward, kill all the guards but not the passengers. Be warned that if you aren’t hiding your face, you will get into a lot of trouble. Secondly, carry some explosive because often you will need them to open safes.

Once you have killed the guards. Rob everything you can. The trains are usually filled with suitcases, vaults, bonds, and all sorts of jewelry items. Once you rob the train, go for the passengers. Point a gun at each of them, and they will automatically hand you their money. I’ve noticed that passengers are a lot rich than normal civilians. Fast forward, after you complete the robbery. Take everything to the fence and sell them.

With this method, you can earn up to $200 with each robbery.

Some train routes are so good, that you wouldn’t even get a bounty. For example, the train from Annensberg to Wallace Station goes through a long tunnel, in which you can finish the robbery. It’s worth mentioning that in case you lose your horse, you are likely to end up dead.

If you aren’t a big fan of violence and want to make money in peace. Fishing is the best option for you. If you fish with the right method and explore the correct places. You can earn up to $50 in a small amount of time. But before you do that, you should know the basics.

Firstly, there are two types of fishing in Red Dead Redemption 2. The first is normal fishing, in which you will hunt normal fishes like Perch, Rock Bass, Trout, and Pike’s. The other method is the legendary, which I’ll get back to later.

In normal fishing, all you need is a bait and a fishing pole. Afterward, camp in a suitable location and start fishing. Once you have caught a few fishes, rack them up and sell them to the Butcher. The majority of fishes sell from $2.00 to $8.00. There isn’t a lot of maths involved here. Just know that big fishes and good species can be sold at a higher price. As far as I know, Northern Pike is the best and can go for $8.00. There is a small drawback to big fishes, you can only carry one at a time.

Legendary fishing requires a bit of patience but it’s worth it. All you have to do is meet Jeremy Gill, locate at South East of Flatneck Station at Hill’s Landing. He will guide you with few tips, and also give you the legendary map. Afterward, you have to buy relevant pieces of equipment and start fishing. The legendary fishes aren’t meant to be sold at butchers. Instead, you will have to mail them to Jeremy. There are a total of 13 legendary fishes and after you hunt all of them. Jeremy will invite you on a special trip. I won’t go further, due to spoilers, but it’s well worth it.

I’ve seen a lot of players complain that fishing is hard. Well, it’s not you just have to go through few tutorials. Our guide isn’t based upon that subject, but here are few tips.

You really want money in Red Dead Redemption 2? loot everything. I mean it. The game allows you to loot a wide range of things, and trust me. If luck is on your side. You can get good items and money from everywhere. Now what I mean by Loot everything, is that you make use of anything you see. For example, If you see an animal in the wild. Hunt him, get his skin, and sell him. Similarly, if you see any person, cart, or anything. Go loot him. Just be careful, that you are wearing the mask and not leaving any clues. Other than this, also refrain from doing it close to the city, because there are good chances you will get a bounty on your head.

Bandit Camps are too good to be ignored. You will mostly find smoke from long distance. This usually comes from the bandit camp, which is mostly firing up some woods. The bandits are well equipped and sometimes they can be more than just one. Here is a picture of a bandit camp from a long distance.

The bandits have decent loot and items. Yesterday, I was lucky enough to find a gold watch which is worth a lot. Other than that, they also have decent guns and ammunition.

Apart from Bandits, there are also travelers who camp in a similar fashion. They are also rich and carry pelts of three stars. I’ve noticed their horses are great, and you can make it follow you, for selling later.

If you loot it entirely. That is to say, get its horse, steal the pelts, loot the traveler, and the cart. There is a good amount of chance you get away with at least $20 or more. This is fast, but realize that it’s not good for reputation and sometimes you might end up dead.

This is perhaps the easiest way to earn lots of money in Red Dead Redemption 2. The treasure hunt is three passage connected mystery, in which players explore various maps that eventually lead them to gold. The gold bars are worth 4500 dollars, and all you have to do is follow certain steps. The locations are hidden, and there are a few sets of requirements. Don’t worry though, once you know where the locations are. It gets really easy. Follow more on that here.

Another routine part of the game, that I also consider easy money is Gang Hideouts. There are a total of 6 gang hideouts in Red Dead Redemption 2. If you own the ultimate or special edition, it comes 7. So what is Gang Hideouts all about? Well as you know, there are dozens of gangs in Red Dead Redemption 2. These gangs have hideouts which can be attacked and robbed. Depending on the gang hideout, each is guarded and likewise, the loot also depends on its status. Clearing a Gang hideout isn’t that easy, but it’s well worth it. To explain it more, you can kill the leader, get a treasure map, also loot dozens of soldiers, stashes, crates, and countless items that are scattered all over the place. Just make sure that you are good on weaponry else it’ll end up horribly.

I know this method nowhere mentions how to earn fast money. But I must highlight it. The majority of Red Dead Redemption 2 players focus on earning more money, but they ignore the aspect of dying. Whenever you die in Red Dead Redemption 2, you always end up losing $1500. This is a lot of money.

If you compare it to your earnings, you will notice that it’s hours and hours of hard work that you lose in a glimpse. Avoiding Death isn’t that hard, just don’t loot people in towns, kill unnecessary lawmen, and break laws.