As I noted in my earlier Cyberpunk 2077 review, CD Projekt Red was always my favorite game studio for two reasons. One, the games they always developed were fantastic, and on top of that, I’ve always appreciated their honesty in terms of being valuable to the entire games industry.

Playing Cyberpunk 2077 was nothing short of a disappointment; I personally did not like anything about the game except its story. Now, liking a game is strictly subjective, so I won’t throw my agenda about Cyberpunk 2077 not being a great game for everyone. However, I’ll highlight what I’ve seen this past month, and that is not me being rational, but strictly speaking the truth on how a fantastic studio that made great authoritative games went greedy beyond imagination.

As you might have seen countless memes and articles on the internet that are now reflecting on the poor statements of CD Projekt Devs. I’m still unsure why would they lie about something that is not exactly true. I mean, saying the game runs pretty well on current-gen consoles is just stupidity and merely dragging the poor users who placed trust into buying an unready game. Not just that, any assertion you would see from Mr. Adam Kiciński isn’t straightforward. There are constantly contorted words, and this just demonstrates that CD Projekt was clearly aware of all the disasters and still chose not to inform the public/investors so that they could achieve their profits, and then later decide the fate of Cyberpunk 2077.

Q: “And then the last question is on the PS4. I think there was some press stuff saying that maybe it wasn’t working quite as well as it could on PS4. Have we seen any gameplay on PS4? Maybe you could give us a bit of an update on how it performs on PS4. Thanks.”

Q: “The game has not been presented on basic, not pro console PS4 and Xbox 1 so far. What is the performance of the game on this machine?”

Adam Kiciński: “Of course, a bit lower than on pros, but surprisingly good, I would say for such a huge world. So, a bit lower, but very good. That’s the answer.”

Adam Kiciński: “So, in terms of bugs, we are all aware of them. Of course, such a big gang can’t be just bug-free. That’s the kind of obvious, but we believe that the level will be as low as to let gamers not see them. And fortunately, some bugs extended previously were caused by some general – I would say general features and many of them are already fixed. So, what gamers will get will be different from what – and what we viewers will get in this final review is it’s better than what previewers, got.”

Although, we had emailed CD Projekt four months prior to Cyberpunk 2077’s launch for Review Copy. We were first told that they would reach back to us if possible, and after reminding them in the final weeks of launch. Our PR was told copies were limited, and it would not be possible. Obviously, this wasn’t the end of the road, and we had decided to pre-order the game.

During these final days of pre-ordering Cyberpunk and also seeing other magazines publish their reviews. It had entirely astounded me, the numbers were 10, and I mean, this was the standard everywhere.

Other than this, I was also surprised that other similar sites weren’t given review copies as well, and only the industry’s big guns were handed review copies.

This is pretty strange because you are not giving everyone review copies; your intentions are simply clear. You want to minimize the negative feedback, which would have ultimately resulted in lesser copies sold. Again, I don’t blame any publications or have an agenda against them, because from what it seems majority were given PC Copies. And, before release, we saw an incredible amount of hate for those who criticized the game. An example could be the GameSpot review, which has psychologically an irrelevant comment section.

Had CD Projekt been transparent and allowed publications to share footages, we could have seen fewer users getting dragged into the mess. Moreover, it’s no coincidence that after Cyberpunk 2077 was launched, and other publications gave honest reviews, we saw a Metacritic score like this. 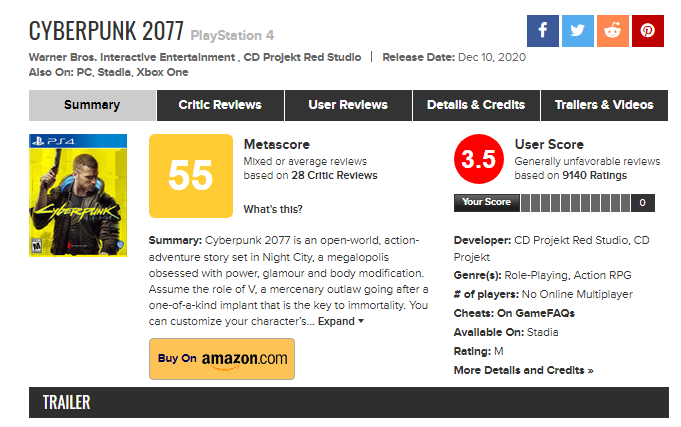 Q: “And the last question, well, it’s tricky. It’s tricky to share our impressions before reviews and before gamers are able to play the game. Well, we are satisfied. But we are never fully satisfied and don’t get me wrong. It’s not like we are not sure, but let’s wait just 15 days. Let’s wait again even let’s because reviews will be published earlier. So, let’s wait for the external judgment. And then everything will be clear.”

Adam Kiciński: “On top of that in the next two weeks, we’ll be sending review copies of the game to journalists around the world, enabling them to publish their impressions and reviews of Cyberpunk before its release. We are very excited and we eagerly await the moment gamers can finally lay their hands on the game.”

“The question is from Piotr Łopaciuk DM PKO BP. When exactly embargo, no reviews will be lifted? Before release, but we are not revealing the exact date — the exact day, actually. So far — but definitely before we release, we let gamers read about the game. Before the buy — before they buy the game.”

The Delays Have Purpose

Although a lot of people would say COVID-19 caused the delay and other factors. But genuinely speaking, Cyberpunk 2077 was in development for more than five years, and as I’ve played the game. It does not look good for a title that was in development for so long. My thoughts on this entire delay saga have always been the same. CD Projekt and Cyberpunk 2077 marketing team continuously made the headlines with delays and doing it so repetitively, it wasn’t a matter of shame anymore. This was their tool to stay in the spotlight, be relevant, and most importantly, promise fake release dates so they can get as many pre-orders as they want. Suppose, had they given the December 10 release date from the beginning, someone like me wouldn’t have pre-ordered it at the start of the year. This would have resulted in CD Projekt not earning money from pre-orders, which, as we have seen so far, isn’t what they always wanted. They pushed fake dates so that they could grab the pre-order money. Here is xsollo on what Pre-Order means for game companies.

“One reliable way to do this is by offering pre-order sales, founders packs, and other pre-release goodies. A solid pre-order campaign can even make up 20-30% of your game’s first-year sales.”

“Pre-orders can be a powerful way of making sure your game is a success. They drive interest in your project even before it’s out in the wild and can help you plan your future as a business.”

“The ideal sweet spot for pre-orders is 3-6 months before release; this is the point at which customers can be certain that the game is going to come out on time. It also works as part of your marketing campaign to drive excitement and hype around your game.”

“In short, pre-orders can play a huge role in making sure that your game is a hit. There’s a lot to consider when rolling them out, however. We’ve answered some of the more pressing questions below.”

My Question to CD Projekt is why would they continuously delay the game thrice, despite knowing it wasn’t even ready for December 2020 Release.

CD Projekt Is Handing Out Refunds, No They Are Not!

Yes, I’m fully aware CD Projekt promised refunds to those that were disappointed. In fact, Sony also removed the game, but people misunderstood one thing during all this saga. CD Projekt didn’t have a deal or agreement with either Xbox/Sony/Microsoft that would allow users to get refunds beyond the timeframe. All those headlines and marketing were useless because the rules didn’t change, and again, those who were tricked into the disaster had nowhere to go.

Sony won't refund my Cyberpunk 2077 order, even after the game's developer said buyers experiencing problems could get refunds. The game literally crashes my PS4 and is unplayable. Sony's answer? Wait for the updates. pic.twitter.com/Zx2LSRhqqN

This was also addressed by vice president of business development, Michał Nowakowski in an investor call.

“Microsoft and Sony have refund policies for every product that is released digitally on their storefronts,” Nowakowski told investors. “Despite several articles I’ve seen that things are being set up just for us, it’s actually not true, these policies are in place and have always been in place; they’re not offered specifically for us.”

“Anyone who has purchased any title on the PlayStation Network or the Microsoft storefront can ask for a refund, and if it’s made within certain boundaries, usually related to time, usage and so on, can ask for that refund,” Nowakowski continued. “Our procedure here with Microsoft and Sony is not different than with any other title released on any of those storefronts.”

Thankfully, Sony and Microsoft went above and beyond because they are “professional company” and staying loyal to their customers has always been their priority. Many users who were disappointed had gotten refunds, while those who had happily grabbed Physical Copies were left with losses.

SIE strives to ensure a high level of customer satisfaction, and we will begin to offer a full refund for all gamers who have purchased Cyberpunk 2077 via PlayStation Store and want a refund. Please visit the following link to initiate the refund: https://t.co/DEZlC0LmUG.

How Outcomes Would Have Changed

Only one could wish this all wouldn’t have happened, but again, these things were done on purpose, and defending it is a shame. We also wouldn’t have seen these lawsuits that are now piling up (deservingly so) and users not going through so much disappointment. For me, CD Projekt has lost its trust, and although I’d wish them luck for future titles. There is no me trusting them again with pre-orders and statements.

“It takes many good deeds to build a good reputation, and only one bad one to lose it”

Author Notes: I also reviewed the game on PC, and while I think review scores are subjective. The game is nowhere close to 9 or 10. It’s RPG Mechacnires are mediocre at best, the open-world gameplay lacks all fundamental features, and other things like NPC’s, AI, Driving Mechanics, and Combat are super inconsistent. Also, I don’t mean to be somber; I just come here to remind you that the entire launch was nothing short of a disgrace and slap to the whole gaming community.

Martin has been pursuing the world of technology since his childhood. Extremely passionate about CS:GO and eSports games, a very enthusiastic person when it comes to PC Hardware. He is the king of the gaming realm and that's what makes him stand out from the crowd.
Guides
Back to top button
Close
Close