Just like us, have you also started playing Cyberpunk 2077? Well, If you have, you would know the importance of money and Legendary Items that ultimately contribute to crafting, upgrades, and cyberwar that’s not too cheap. To expand it more, Cyberpunk 2077 has tons of RPG Mechanics that are all about money and items, realistically making the game fun. On the opposite side of the coin, earning money in Cyberpunk 2077 is hard. You can either do main missions that pay less or do side missions that are somewhat an improvement over story quests. Notwithstanding, they still provide less, and eventually, grinding becomes the only way to make more money and buy legendary items that are limited.

Are you looking For Infinite Money And Items In Cyberpunk 2077? Here’s a perfect glitch to explore!

In our guide, we will highlight a method that will guarantee Infinite money and any item you want. This does not happen through any mission; it’s a glitch for the most part, or an unnoticed trick if you put it this way.

To get access to this trick, all you have to do is follow the steps mentioned below, and you can easily quadruple your Cyberpunk 2077 money and legendary items.

To begin this trick, you will first have to grab a unique map available through a side mission. The mission is located in Santo Domingo in the 6th Street Region. Here is an exact picture of the task that will get you this specific painting for money glitch.

The mission is all about stealing paint and killing some guards. The purpose of this paint is that it’s precious, and. If you sell it to Drop Point, you get the highest amount of money. Once you have gotten the map, which looks like this, save your game because things are about to heat up.

Here are two takeaways from this method.

In case you think rolling back time at the shop is too much, go to a Ripperdoc, who is always wealthy. Sell him the maps, and from what I’ve seen, the ripper docs invariably have $60000. You can also then buy items, make him wealthy, and sell the maps again. Take a look at this picture below. 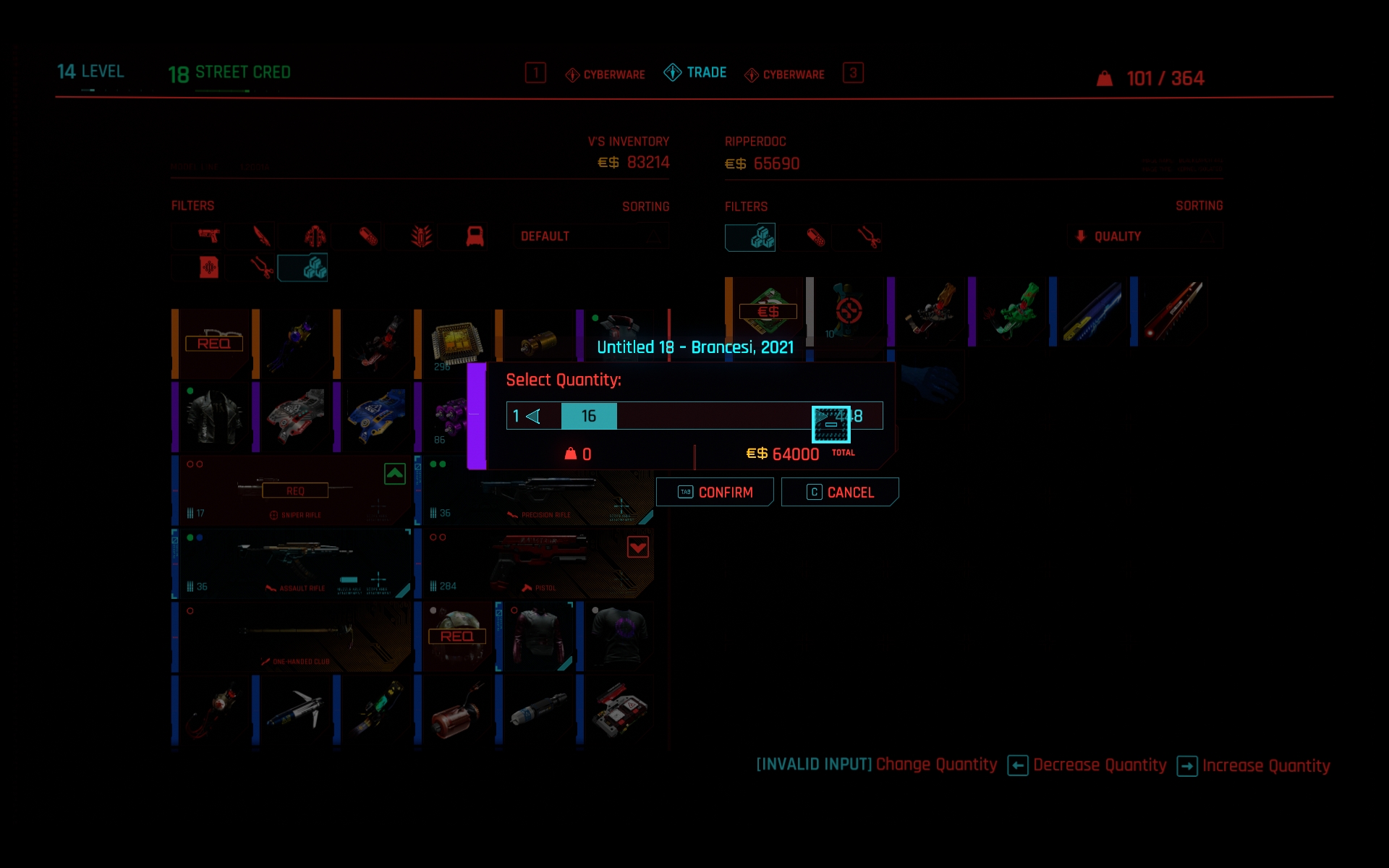 In CyberPunk 2077, there’s always one way or another to spend some of your hard-earned eddies on, whether it’s a new outfit that you’ve got your eyes on or some high-tech weapons of mass destruction. You could opt for the method of making money the traditional way by taking on some good old gigs for your local Fixers, or you could use some exploits that are still unpatched within the files of the game to earn an infinite amount of money and crafting Xp by using some of the few methods that we got in store for you!

This method serves a dual purpose. It can help you make some great eddies along with some well-needed XP that you need to go up against some difficult-to-kill enemies. So, you’re looking to make a quick buck around night city? Well look no further as this is the exploit for you! When we go down into the specifics, you’ll want to see some vending machines selling items for around 10 Eddies each, not to be confused with the ones that sell items for about five eddies.

Now, what you want to do is purchase all of the things from the vending machine until they’re sold out. You might be wondering what you’re getting yourself into but keep reading as we’ve got a great money and XP trick that you’ll frequently be using. We got your back! Proceed to add all the purchased items from the ground into your inventory and go ahead and access your list.

Navigate and find the things that you just bought, and don’t be shy. Go ahead and dismantle all of them, and you’ll obtain some common and uncommon crafting materials. We’ll go ahead and give you a tip. The Mechanic Perk is just exactly what you need to increase the number of items you get from disassembling other items and this will further increase the number of weapons you can craft in addition to getting a crafting bonus.

When you’re done with all of this, head on over the crafting menu and start crafting as many uncommon/green weapons as you possibly can with all the resources that you’ve obtained, you’ll gain loads of crafting XP for each firearm that you prepare, and this adds up pretty quickly, and this can be utilized again and again to gain unlimited crafting XP. You should be on the lookout for items that sell for a considerable profit. Simply hover your cursor over the items to tell how much an item is worth and then proceed accordingly to make the most of your eddies!

Say, you’re selling the Nekomata rifle, well it can go upto 78 eddies which is a pretty good price to sell it for and you can follow up by selling dozens of weapons for a higher price.. In that case, this can be an incredibly quick and easy way to make an infinite amount of money as you journey through night city.

Now, for this money-making cheat, you have to be a bit patient, but it’s pretty much worth the time and effort. First, you need to finish the first primary mission of Act 2, which is called “Playing For Time,” where you are introduced to a character by the name of Takemura at a diner. This money glitch allows you to obtain a specific item from a side job that you can then sell at a dropbox for an excessive number of eddies. Then you repurchase it for next to nothing. You have to keep repeating this process until you’re filthy rich. If that sounds too good to be true, you can check out some detailed instructions on proceeding with the Space Oddity Glitch.

You have to first head on over to Ranch Coronado in Stano Domingo. When you get to the location, go and find a gas station with a homeless encampment which is where you’ll find the side job Space Oddity. Go over to the men at the table and start negotiating with them. This requires you to have a body level of 7 or buy it off of them for 2000 eddies. If that sounds a bit too tedious, you could just shoot them to death and simply pick it off of them. Once you’re all set and done, you’ll need to either hack the laptop conveniently located at the table, which requires you to have an intelligence of 10.

The alternative is to find the location of the body that the men stole the laptop from. If you go with the alternative route to find the body on your own, you can locate it between some dumpsters located on the west side of the gas station. You’ll already have a scanner on hand and you can use it to locate the position of the body. Now, proceed to acquire the access shard from it and then, go ahead and slide it into the laptop. A prompt will appear to launch the launch.exe file. Now, you’’ have access to specific coordinates for the location of the painting. The next waypoint will direct you to those coordinates or the drop point. Beware as this area is surrounded and guarded by Militech soldiers with high tech weapons and equipment. We suggest that you should at least be level 15, but that can change depending upon the skills, perks, and combat skills you possess. Proceed to execute the Militech agents and acquire the painting.

You can only perform this exploit once during the I Walk the Line Job. While you’re way on your quest to reclaim the mall for the Voodoo boys from the animals, you’ll have to battle their boss, Sasquatch. Your battle with her is the key to this exploit. Now, you have to make sure that you’ve eliminated all other enemies before starting your fight with the Sasquatch. If you mess up, you can use the autosave feature to try again.

After you’re done with killing Sasquatch, you’ll receive XP and Street Cred. Don’t forget to take her loot! Now, manually save in a new slot and load the save game you just created. Sasquatch will be lying on the floor in the new save, but she’ll still be alive. Proceed to put her out of her misery once again as it won’t take you that long, and you’ll receive all the rewards for defeating her once again. Repeat the process until you’re satisfied with your earnings. After the initial fight for better rewards, you can also change the difficulty to very hard and get a bonus out of the loot. Just don’t forget to change it back. Beware, as this exploit with Sasquatch can’t be done again once you move on from this mission.

And that’s pretty much all the Money, XP, and Street Cred Tricks and Glitches that we had in store for you today. These glitches seem to be working with the latest update, so head on out into night city and buy legendary weapons items and exotic cars to your heart’s content. Stay tuned for more on Exputer to learn more about any upcoming CyberPunk 2077 tips, tricks, and glitches that we find out, and till then, see you next time!

Through this method, countless doors now open that need your attention.

As of December 19 and Hotfix Update, this money/item glitch is working flawlessly. I wonder if CD Projekt will ever take action because they have lots of things to deal with right now. Firstly, they are removed from the PlayStation store by Sony over excessive refunds. Other than that, the entire game is broken, and in our review, Martin Bell gave it a 6, describing the game as “unsatisfactory.” So while this glitch is around, make sure you are taking full benefit of it at once, because who knows if it ever gets patched.

There are also other legendary items and money glitches in Cyberpunk 2077, but none of them are as easy and straightforward as this is. Moreover, this method also opens the possibility of nearly every RPG Mechanic in the game.