You may be max enough, but are you mad enough? Here’s a clue: I don’t know what that means. After spending almost 40-50 hours in  Mad Max, however, I’ve come up with some beginners tips and tricks which you wish you’d known before you started playing Mad Max. Here are some general two cents to keep in mind while implementing waste to the wasteland in Mad Max.

Play the story missions with priority 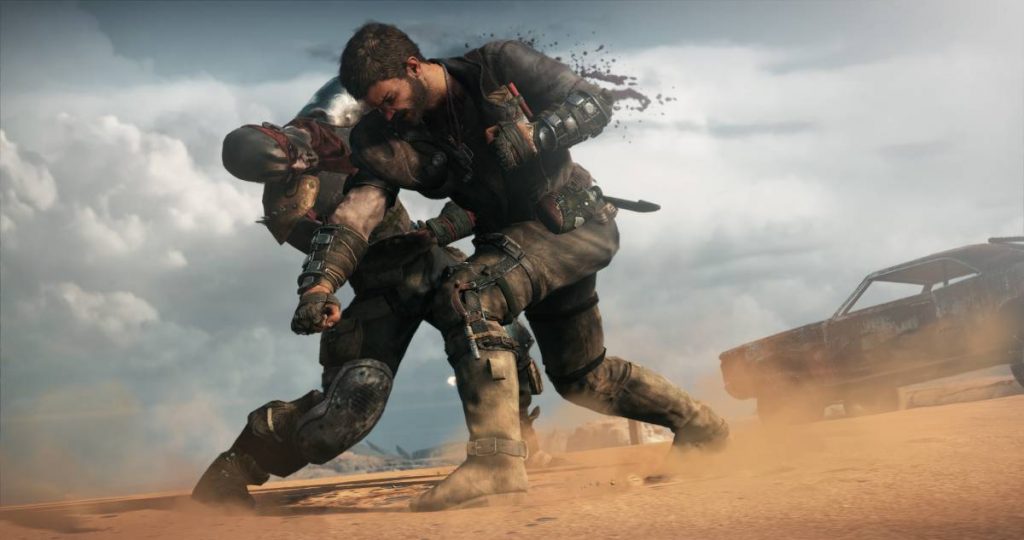 As I moved forward at the beginning of the story, the first most important thing I did was to start grinding and getting my car ready for the ultimate finale, this told me that the game is more than a bit heavier towards wasteland tasks than it is towards the main quest. So, take your steps, enter the end game with a powerful car, you’re going to need to need to conquer a lot of enemy bases, take down a lot of enemy towers, clear a lot of minefields, and gather a whole mess of scrap metal and waste. If you won’t do enough of this in-between the story missions, you might wind up doing a lot at once before the final missions of the story. 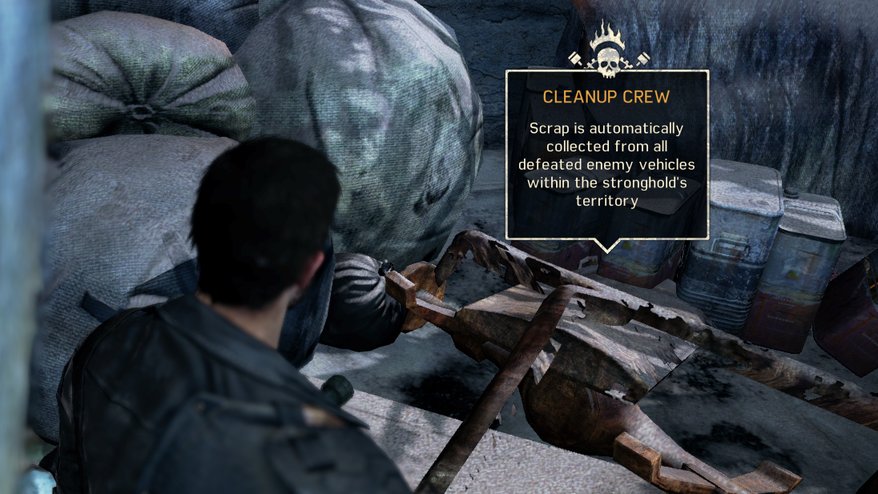 In Mad Max, scrap metal is very important because it is the basis of just about every upgrade in the game and collecting it, is time-consuming and important at the same time. This becomes true when you destroy enemy cars, which drop tiny bits of scrap whenever they explode. There’s even a truck in Mad Max called ‘Scrapulance’, which drops a lot of metal when you catch and conquer it and is worth even more if you remove the driver and get the truck to your base.

The issues will arise when Max has to stop, get out of his ride, and run here and there manually picking up pieces of scrap that appear on the road after the explosion of the car, and it quickly makes you feel tired. That’s why your first order of the business should be putting together a cleanup crew to pick up the fallen scrap for you. Once you complete Jeet’s first stronghold story mission, talk to him about making modifications to the base. Then, run around looking for a good cleanup crew node. Track it on your map to search the locations of the parts you need, and go out and get them as soon as possible. Get back to the base, find the node again, and build it. From then on, scrap from demolished cars will be collected automatically, this is a major life saver. 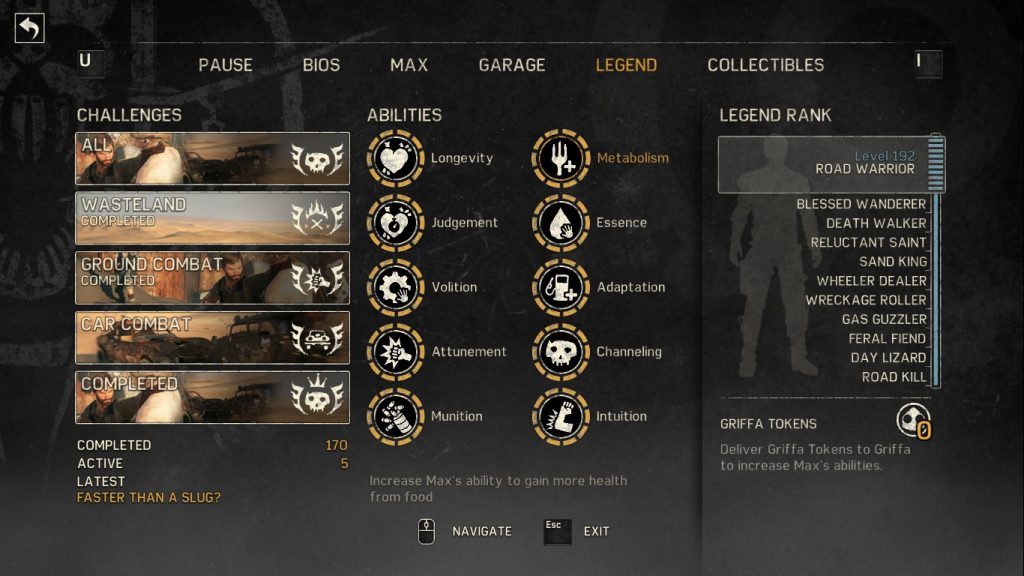 There are two ways to upgrade Max himself. One is through the menu, from where you can tinker with his dusters, shotgun, knuckle, clothing, appearance, and fighting skills. The second one is by visiting a mystical weird guy named Griffa who usually wears a very massive backpack in history and appears periodically in various spots in the desert.

To increase Max’s abilities with Griffa you’ll need tokens, which you can earn by accomplishing some certain challenges. You’ll beat many of these challenges accidentally, simply by going through the game. For instance, you might drive a shiv into the neck of a gibbering War boy and you’ll get a notification saying “Challenge complete” absent-mindedly drive a shive into the neck of 10 Gibbering War Boys!” The prize: A Griffa token. 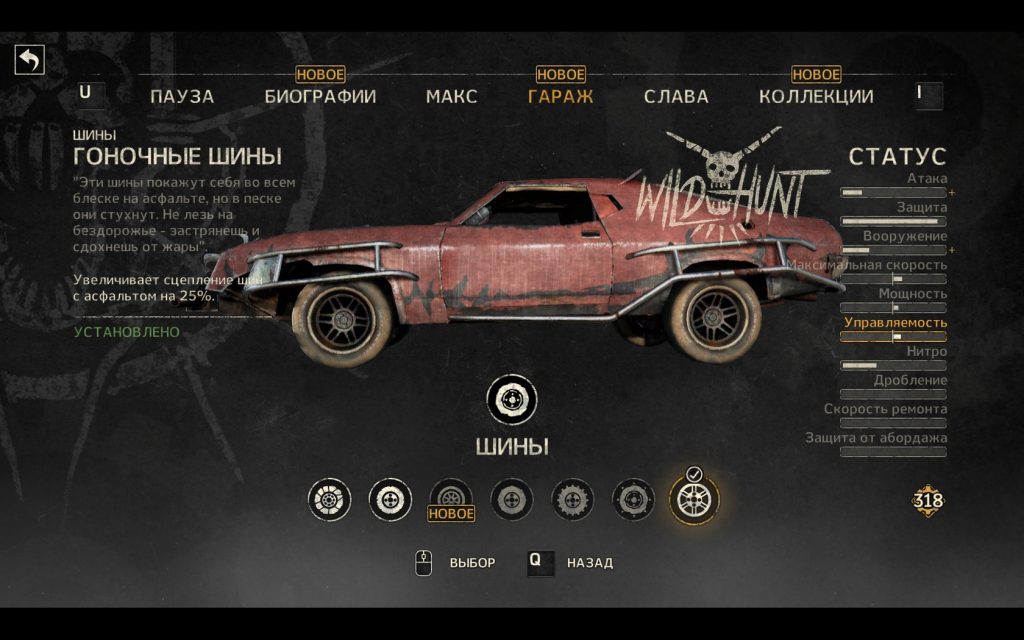 With a lot of exciting and different things to upgrade on your, like rams, spikes, flamethrowers and nitro chargers, it’s pretty easy to overlook your suspension because it doesn’t look like a threat to any enemy, in reality, it is a threat indeed. It’s vitally important although most of the Mad Max’s races are optional tasks, two races are required to advance through the story missions and beating them is going to be more about the handling and steering of your car rather than ramming other cars. The suspension isn’t a fancy choice for a war machine, but sometimes you need to be specific about some things.

Note: If you’ve added heavier armor and a bigger engine then you might find your car’s handling a bit sluggish to control, consider downgrading a few other elements in order to balance out everything.

Remember that fast travel swaps out your car 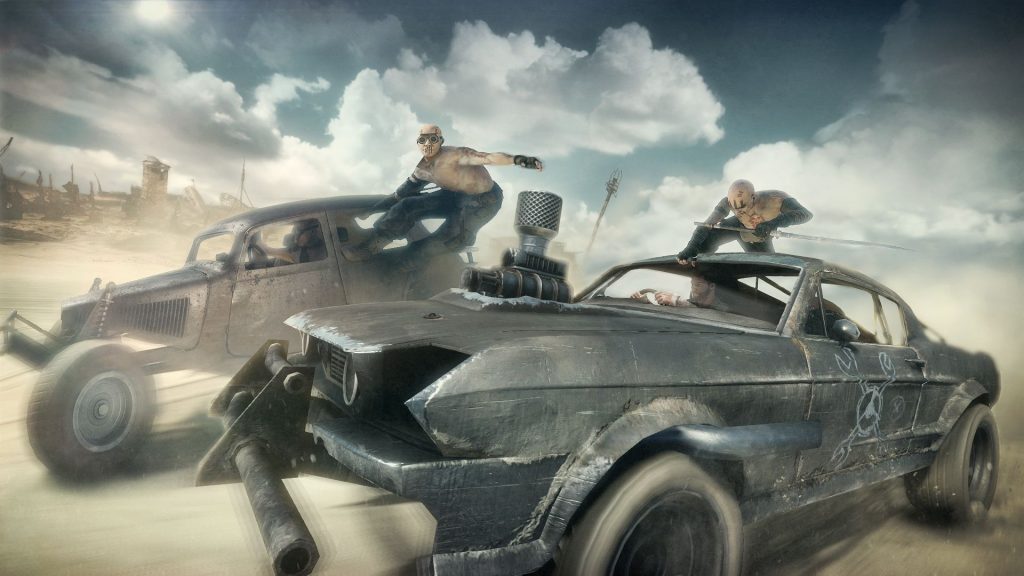 In Mad Max, the fast travel system is quite flexible, unlike Bethesda‘s games. You can fast travel pretty much anywhere whenever you want, even in the middle of a fight or car battle. But know that if you’re driving a car other than Magnum Opus, it’ll disappear when you reach your destination and be replaced by the Magnum Opus. So, if you’re drifting in a faction-car in your Chum’s buggy or Archangels, do not fast travel unless you’re completely done using those other vehicles. Otherwise, you’ll have to get it back from a stronghold garage.

Use Chum, not the dog, to find minefields 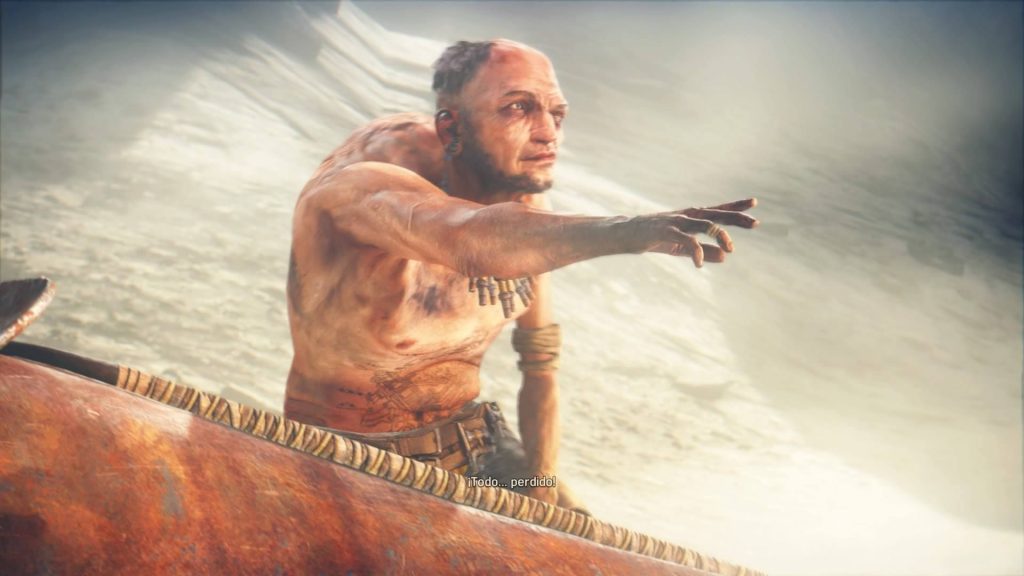 Your good’ol hunchback mechanic Chumbucket is happy to point out local glamor while your drive around, such as approaching deadly parties, war parties, and scarecrow towers that need to be invaded, even though you’ve already pulled down thirty of them and you really don’t need to be told that anymore anyway.

Your hunchback buddy can also spot minefields. If you hear him shout about “boom-boom fields”, check your map as fast as you can. If there isn’t a minefield icon, either mark or memorize the spot on your map to come back with the dog instead of Chum to clear it.

Although the dog can lead you to the minefields too, it’s much easier to let Chum find them, because driving through the wasteland with the dog will cost you the harpoon and nitro-boosts. When you take the dog out to clear the minefields, it is very easy if you’ve already used Chum to find them.

If you’re caught in a storm, make it worth your while 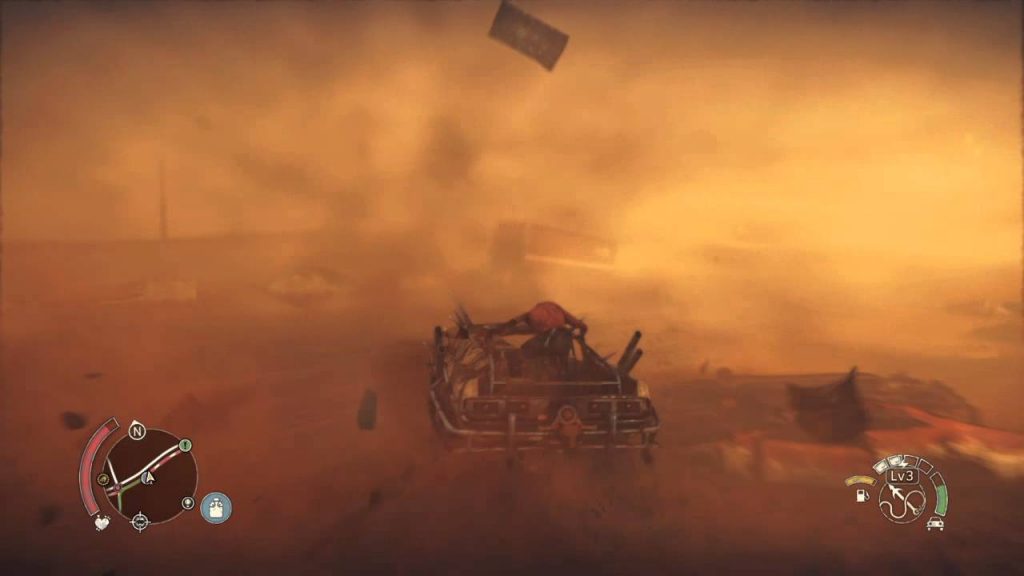 Dust storms are thrilling, exciting and deadly as hell. They can turn your ride into a burning wreck and no time and can fling you into the sky when you step outside. They also blow a lot of debris around your surroundings, including massive boxes of scrap metal and there are a couple of ways to get them.

The safest way from my point of view is to try the weather storm by getting into cover. Not inside a friendly stronghold that will cause the storm to pass quickly — but a camp or some other structure to protect you from the waste and lightning strikes. Then take a breath, wait it out. After some time, the storm will let you explore and you can grab some of those huge crates of loot lying around in the dust. 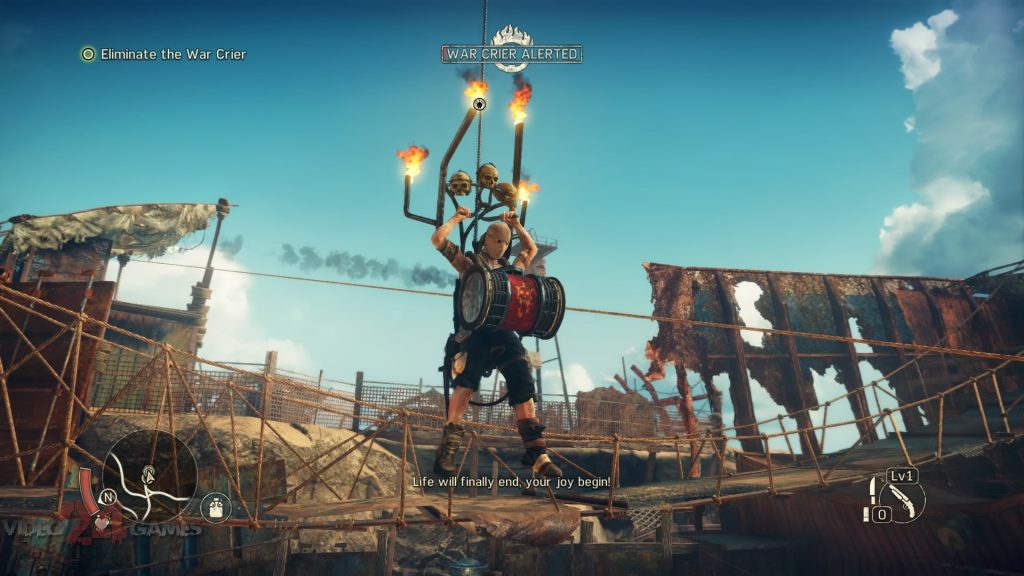 You’ll find war criers in enemy camps, sitting in the seats of dangled cranes. When a brawl begins, they start shouting encouragements to the goons you’re fighting simultaneously beating their drums as well, which certainly gives them a buff. In a general way, you’ll try to take out the War Criers before a brawl begins, either by sniping them from a distance in your car before you reach the base or with a quick shotgun blast from the near.

Just once, though, let them live! After the brawl, when they see that their War Boys are dead, the same guys that were screaming at to kill you, they’ll realize that they were just dangling in their goofy chairs at the mercy of a dangerous and furious wasteland legend, their attitude will change. Looks, they were just doing their job, you know?

And with these basic introductive tips, your beginning of the game will be pleasant enough to enjoy throughout the whole Mad Max. Excel than prevail!