When beginning a brand new world, players have the choice of selecting the Terraria Master mode option from the starting menu. This is a one-time choice that cannot be reversed, since it changes some prominent aspects of the game.

It is an extremely difficult mode which is intended for veteran players, and it has its own unique selection of content that is not present in the regular game.

So with this Terraria Master mode guide, we’ll show you all of the ways this choice alters the game.

First of all, it should be mentioned that Terraria Master Mode is not the same thing as Expert Mode. That is a completely different category of difficulty, but the two modes share many similarities.

To make the differences between each mode in the game easy to understand, we will look at all of the major variations between them.

This is the most basic mode in Terraria.

This is a step above Classic Mode.

The hardest difficulty in the game.

We will now go over all of those items that players can only acquire in Terraria Master Mode.

Jumping into Master mode is nothing to laugh at. Even experienced players are likely to be pushed to their limits when facing off against the hordes on offer here.

So we’re going to lay down some basic tips and tricks that players should always keep in mind. Most of these are useful in the other two modes as well, but they are especially relevant in Master mode.

Keep all of these tips in mind, and Master mode should be slightly more tolerable for you.

There are two main categories of items that are dropped by Bosses in Terraria Master Mode.

The first of these are Relics, which are basically furniture items in the shape of their respective bosses. They are 100% likely to drop, and it might actually be more fitting to label them as trophies.

The full list of these can be seen below.

These can be used to call forth Pets, Light Pets or Mounts that are modeled after their bosses. They all have a 25% drop rate.

You’re not likely to get these items on your first try, but you can attempt the bosses again using the relevant summoning items.

This has been eXputer’s Terraria Master Mode guide.

Terraria Potions: A Complete Guide To Healing And Buffs 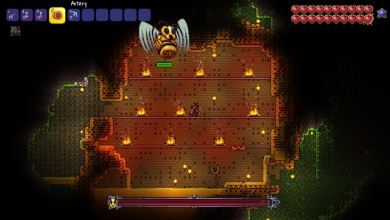 Terraria: How To Summon And Defeat The Queen Bee