Developed by Bohemia Interactive, the Arma franchise has long dominated military sandbox games with its unique approach to first and third-person shooters. Arma 3, which came out a long decennium ago, expanded upon its premise with a bundle of DLCs. However, players have been carving a modern Arma installment that looks up-to-date and utilizes the contemporary allure of next-generation consoles. Little information was known about Bohemia Interactive’s next project in the brewer, but that has changed with a recent leak.

The alleged marketing and brand guide for Arma Reforger has been seemingly leaked online by u/PlzDontBlame on r/GamingLeaksAndRumours. Bohemia Interactive’s pursuits for Arma 4 seem to have been revealed alongside a project focused on immersive multiplayer; an official announcement is planned for next week. Moreover, the supposed leak has also unearthed more details about the planned event called “Future of Arma” scheduled for May 17th, on Tuesday. The live stream is rumored to discuss the future of the franchise alongside the Enfusion Engine. 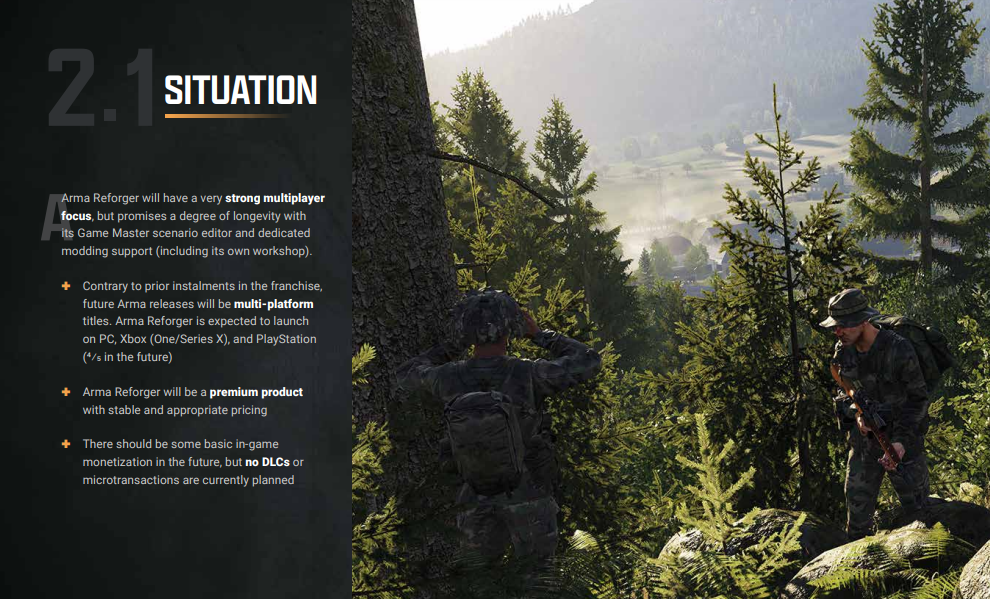 Arma Reforger will be a multiplatform experience this time around.Arma Reforger is supposedly coming out on multiple platforms, including consoles, with a deep focus on solid multiplayer elements. Moreover, the title is labeled premium; no DLCs and microtransactions are currently planned. According to the leaked marketing document, the developers want to introduce the franchise to a console-oriented audience.

Most players have celebrated the recent leak, but a few have shown concern, as a title like Arma Reforger is not easy to be made immersive for a console controller. However, that might change with the modern upgrades consoles have gone through this and prior generations.

The game is wholly based on Bohemia Interactive’s proprietary game engine, Enfusion Engine. Moreover, The game is not a “simulator” like older titles claimed. This time, the Arma franchise has taken a different approach; it is a military simulation title. Arma Reforger takes place amid the 1980s’ Cold War era, where players will specify a “persistent player profile” siding with either United States or Soviet Union forces on the imagined mid-Atlantic island of Everon, which is stated to cover 52 km2.

According to the leaked marketing document, Arma Reforger will incorporate two kinds of grenades, six vehicles (with more than two dozen variants), 15 various weapons, three factions, and 13 combat-focused roles, as mentioned in the picture above. Complementing multiplayer modes, it will also feature its own scenario editor for custom games. A multiplatform Workshop along with full modding support is also planned. Arma Reforger ought to thrive under a roster of mods and immersive workshops after the developers are done tinkering with specifics when the game is established.

Furthermore, the game “provides tactical depth and remains accessible to a broad audience, including console users.” Although the series innovates and extends its roots toward consoles, it keeps the central community in mind. The guide cites that it “must keep in mind the importance” of its primary community of players and “remain responsive” as much as possible. It also includes a plethora of key arts and narrative stories.