Published and Developed by Abyssal Arts, City of the shroud is a text narration-driven RPG game, set in a fiction medieval middle-eastern era of the world. The game is a mix of 2D and 3D graphics, However, mostly you’ll get to play the game in 2D.  City of the shroud is a game based on a breakout of a city, surrounded by weird monsters and entities, topped off with five leaders that are trying to get hold of the city, implemented with your decisions and actions. The game’s story depends on your opinions and it changes as you proceed through the game with the selective decisions, we’re going to keep this review short and to the point with little to no spoilers. So feel free to read on, you won’t be getting any major spoilers.

The game starts when a traveler from outer provinces seeks the destiny of a city to earn something for his family; with the ‘expected’ narrative styled intro where two Gate Guards are standing in your way through the entrance of the city, First of all, they ask your name, in my case I chose my original name and continued along with it. The guards briefly interrogate the traveler (You/Protagonist) of the game and after a few basic questions, we get to see the city of Iskendrun. 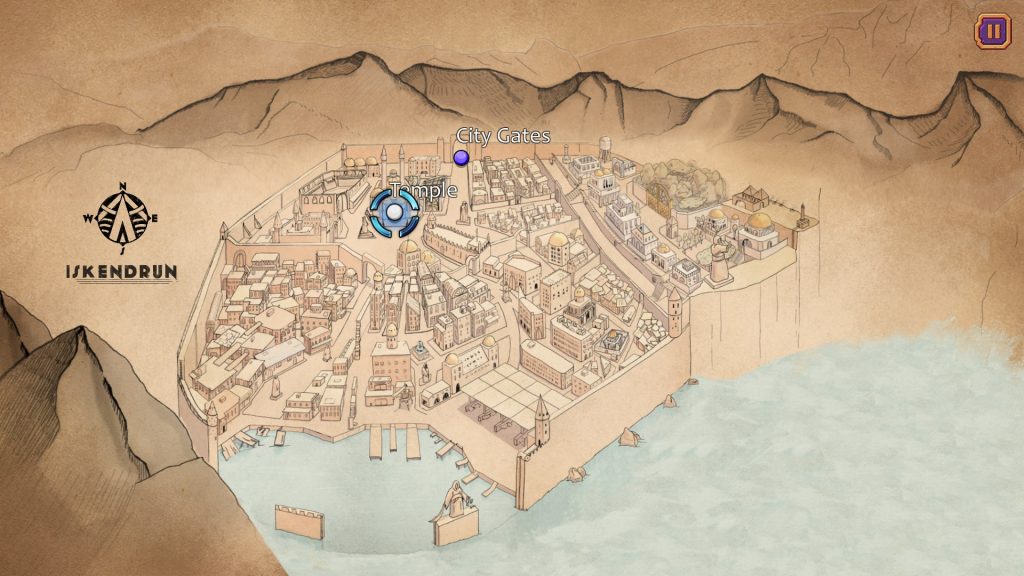 A few moments in the city and the players will get to know that the city is not in the typical ‘peace’, from the initial narrations players are informed that there is an actuality in the city called ‘Portals’ that exhibits monsters, a threat to the civilians and the people of Iskendrun. In this section of the game, we find our long-lasting partner who’s more of a guide rather than a partner, he’s known as ‘Hat Merchant’. The Hat Merchant teaches us how to navigate and make our way through the mechanics of the game, a sort of introductory tutorial. At this point, the game’s gameplay totally felt new and fun for me to be honest but that’s not the case (more on that later).

The city of Iskendrun is controlled by five leaders particularly and every leader has their own intentions and mindsets for the city. 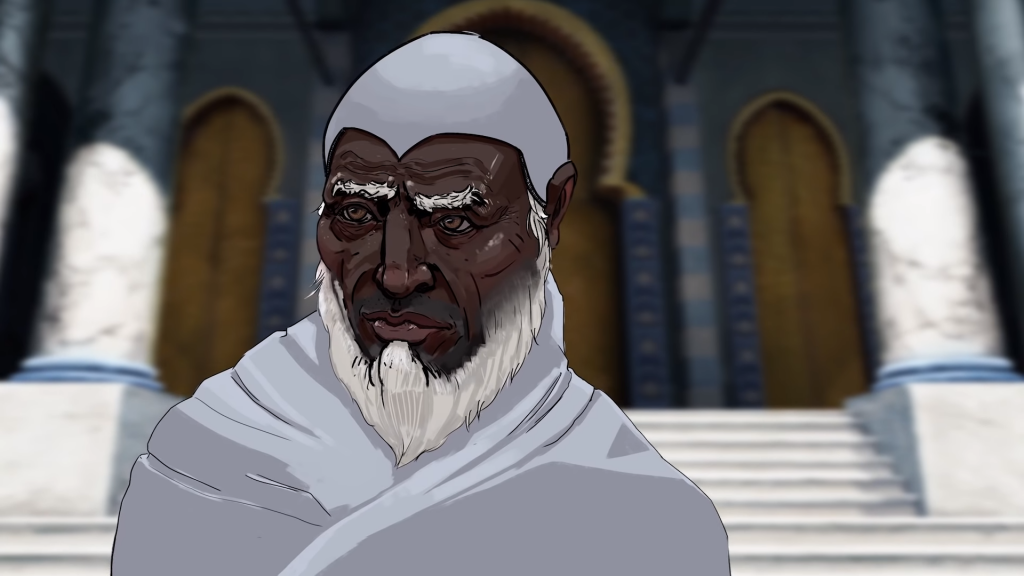 Navid is the head priest of the Iskendrun, and he’s one of the first leaders you’ll get to talk in the game, at first Navid seems like a peaceful man with an unconditional fondness for the people of Iskendrun. 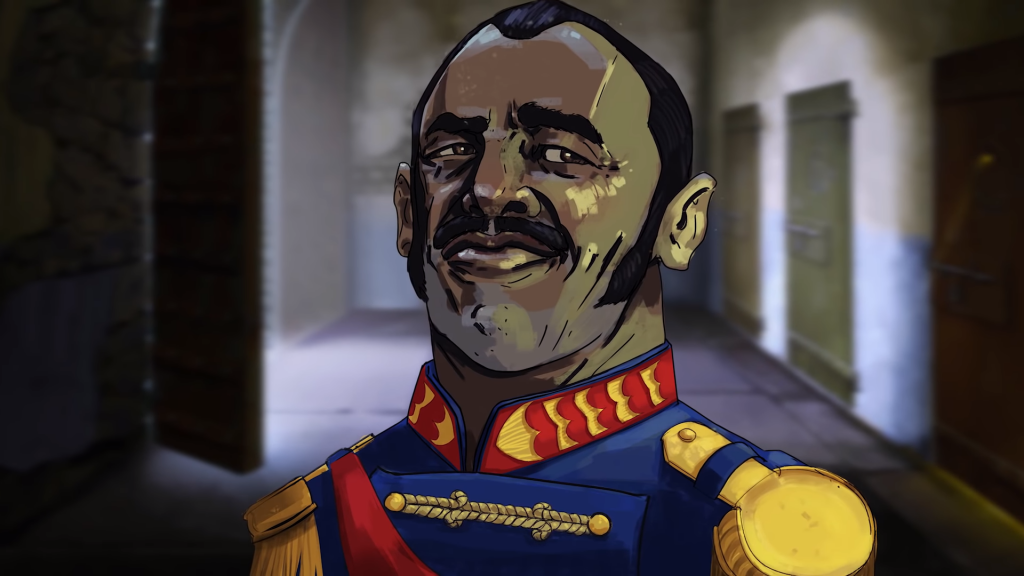 Sohrab runs the City Guard. He appears as if he’s the most righteous man of the city with his strong views and ambitions for Iskendrun. Sohrab thinks that the monsters are to be fought instead of running away from them, he also admires Navid and his views but actually points out that the way Navid seeks to solve thing is kind of absurd and he won’t be able to help everybody by just providing them food and kindness, Sohrab’s mindset says that in order to conquer a city we must venture throughout the whole city and fight our way to prosperity. Sohrab will also point out that there are some leaders in the city who aren’t keen on peace, and they seek to spread violence: Zem and Omar. 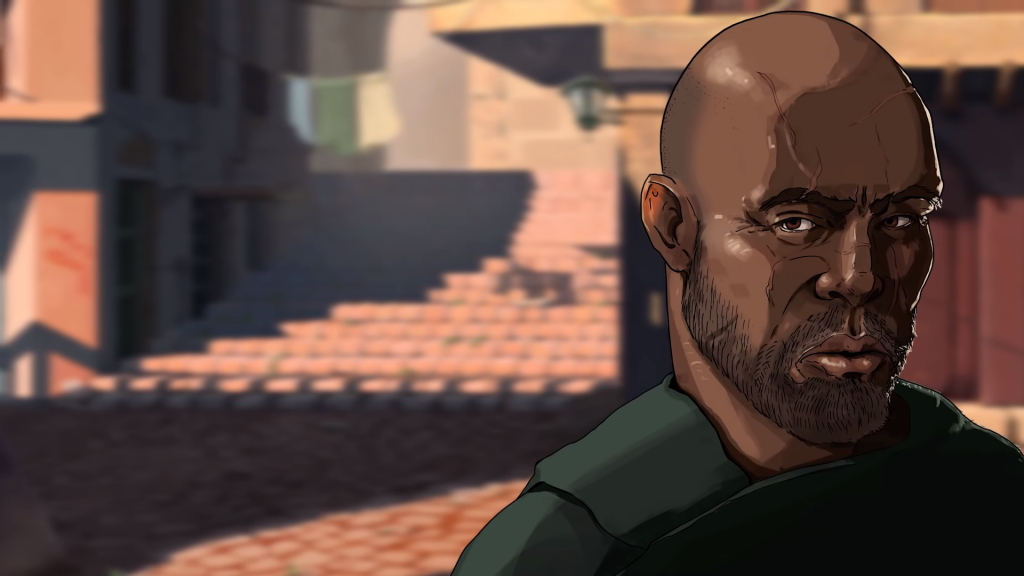 After meeting Sohrab, the next leader we get to meet is Omar, At first, Omar would come up as the ‘Old Beggar’. The old beggar apprises that he himself returned to this city a few months ago from North, Tirwal. The old beggar is actually Omar and as soon as we get to know Omar he tells us that he doesn’t like Sohrab and actually is against him. Omar says that the order and stability Sohrab seeks to spread throughout the city is truly killing Iskendrun: soldiers, families and the poor. Omar also states that Navid has a silver tongue and quick mind, He is anxious to acquire the help of rich but at the same time Omar appreciates that Navid is an honest man because he doesn’t take the aid for his own self but for his people. At the end of the conversation, we get to know that the person we were talking to all the time was actually Omar, one of the leaders. 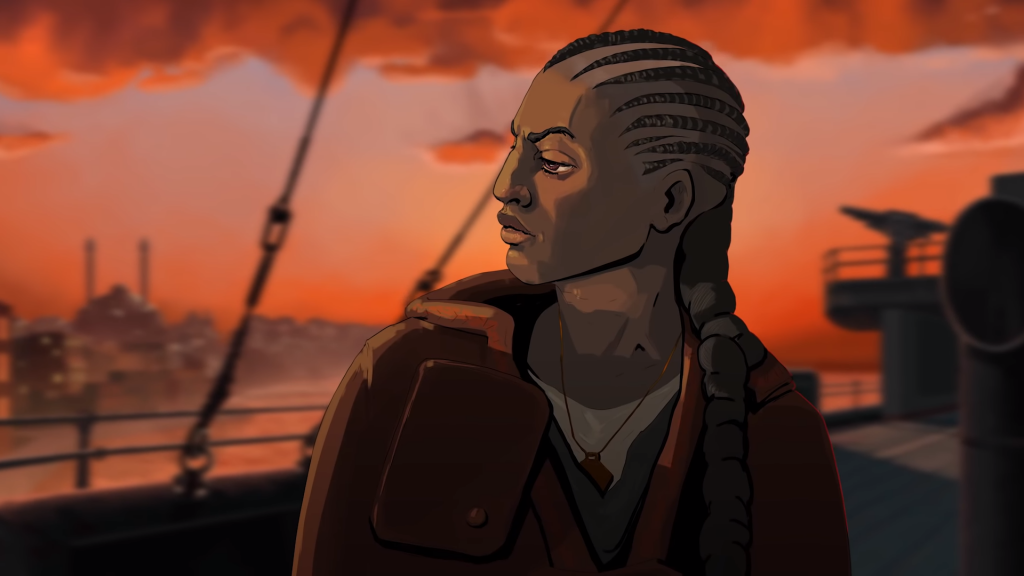 Azura is the main merchant of Iskendrun and she’s the head of all trades that happen in the city, in short words she’s above every leader in terms of power. The first thing Azura says is kind of what I had done if I was in the game, in reality, she says you’d be much safer going back home because the scenario of the city seems to be very confusing and totally shattered.  Azura clearly mentions that the city’s main drawback is that everyone will lie to you and everybody wants something from you. Azura will stay loyal to you as much as you stay loyal to her. 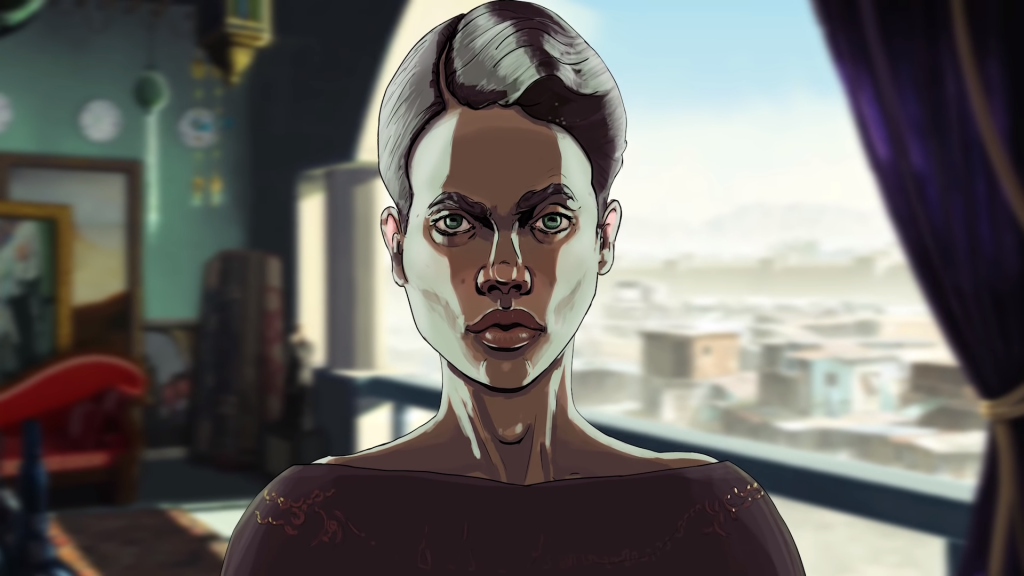 At first sight, Zem seems vulnerable and anxious but she’s helpful also when she offers to find our friend Ravi. Zem also states that Navid is a good man but his views won’t get him anywhere and that we don’t have to fear Zem herself as long as we don’t hurt the refugees, steal or cross her. She is straightforward and has strong views as of now.

We can’t discuss much on the story of the game since we promised to keep it spoiler free, so, we’ll be discussing the outline of the story of City Of the Shroud:

The story depicts an outbreak kind of situation in a city that was once very beautiful, peaceful, a city where all the dreams of outsiders could come true. Due to the outbreak, the beauty and the good aspects of the city have been devastated and in order to fix that we must seek the right path which totally depends on the player’s decision and mindset. The main story of the game is encouraged on the basis of you being the hero and the supreme humble savior of the Iskendrun, which starts when you save The Hat Merchant from a monster after which, everyone thinks that you’re a hero and expects you to save them from the city that keeps them trapped. There are five leaders that hold the city’s future in their hands as we mentioned above and gave brief information about each leader. However, the choices you make through the whole game will settle the fate and future of the city. 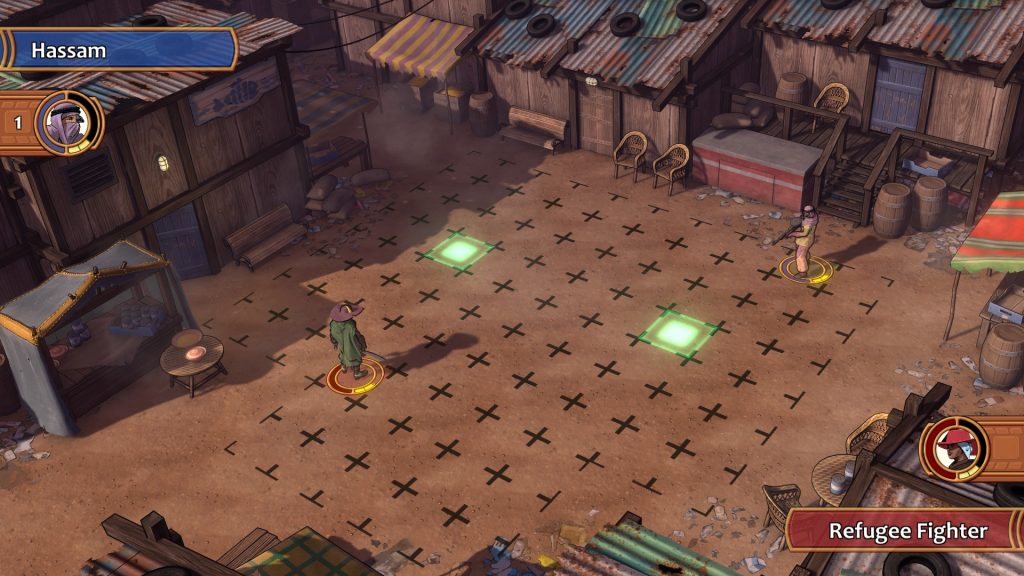 When I got to play the actual game for the first time, it instantly exhibited resemblance to the Dota series, but that was just an initial feeling as soon as I proceded further in the game I realized that the City of the Shroud’s gameplay is very unique and distinguishable in its own way, the game’s main movement is based on tiles which you can see in the gameplay video below: 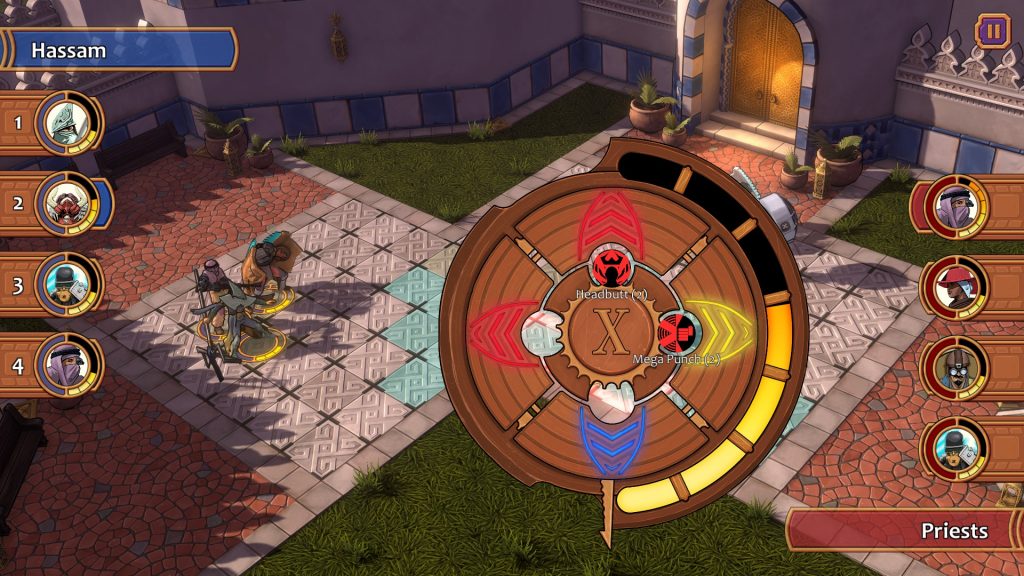 Abyssal Arts introduced a new and uncommon way to execute attacking moves in the game with their Combo Wheel The combo wheel in the City of the Shroud is very similar to a D-Pad, but don’t expect it to be your modern average D-pad since the game’s main theme is based on a medieval era the combo wheel is also based on a distinctive vintage theme. After navigating closer to your enemy (at the initial phase your character will only be able to attack when close to the foe, but soon you’ll unlock characters that can attack from a distance) the combo wheel works by Left-clicking an enemy, holding and dragging the cursor over the basic attacks simultaneously, it will pummel the combo on your opponent while the big X at the center of the wheel will reset the combo, so you can start fresh.

A Link Gem basically enables a specific series of basic attacks to activate a powerful unique effect. It works by combining one basic attack to another, as a result, a single attack achieved with a Link-Gem would do much more damage than a single basic attack. However beware that with massive matched series of attacks the AP gets consumed as well, The AP is basically a regenerating energy of your character which is used to execute every move you make in the game, from moving to another tile and attacking almost everything you do uses AP. By default, AP keeps on regenerating itself so you don’t have to worry much about wasting AP but you can also get AP boosts by moving to the green-lit tiles, these ones offer a significant boost of AP and would benefit certainly in the harder parts of the game (The 4v4 Battles).

After a long series of duo and quadra battles with all types of characters presented and tested in the game, we get to select a team which will be the permanent  battle-ready team from there on out, choose wisely here: There are a  lot of aspects to decide: Overview, Moves, Stats, and appearance, during the team selection you can choose four characters for your permanent team, choose wisely here and create a mixture of all characters to balance out your team’s pressure on the battleground. Basically, you customize almost everything here and this is where things get interesting and fun in the game. 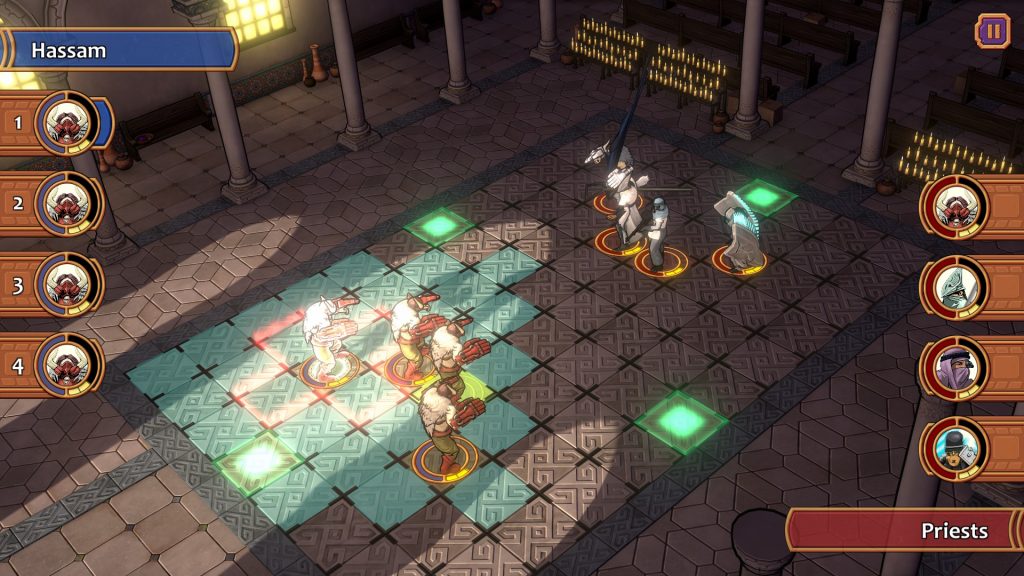 This is where the actual fun begins in the game, actually, after some ridiculously long text narrations, this was quite inevitable to happen if it weren’t for the quadra battles, I might not have done the review as well because without this kind of fun the game would feel incomplete, but luckily Abyssal Arts did a great job with these battles, the four on four battles are amazing and full of chaos, thrill, and fun. This is where we get to use the whole combo wheel in our advantage and execute full powered series of attacking moves. I can only imagine the fun of this when playing with a friend online. Speaking of online I didn’t get the chance to actually try it because during the time of this review the game was still a pre-released version of City of the Shroud. Don’t worry we’ll come up with a full detailed preview of the online mode as well. 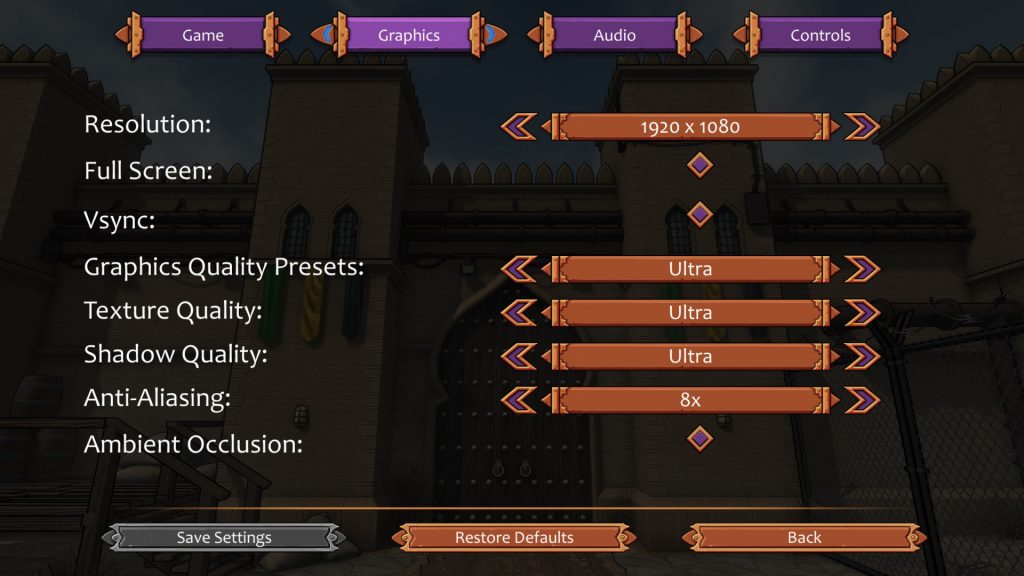 I got to review the Pre-Release version of the game, and honestly, all props go to Abyssal Arts for making the game absolutely bug-free even on the pre-release version, During my review I had zero bugs and problems in running the game on a mid-tier gaming PC, I cranked up the graphics highest they could get and ran it smoothly. Although in RPG games like City of the Shroud, the performance of the game isn’t the main concern though, still it’s worthy to mention it.

To wrap things up, I should mention that I’ve never liked RPG indie themed games, but City of the Shroud got me. At first, the game felt very slow and flat but as soon as the chaos filled battles started kicking in, the game got exciting, also the most important aspect of the game is that the story is driven by our own thoughts, this is an amazing approach from the developers and I wholeheartedly appreciate the attention to the detail of the story, there’s still a lot to the story which I chose not to mention in this review. Overall, The game is very interesting with a touch of middle-eastern era executed with the vintage theme of attacking moves, dressing of characters and especially the soundtracks/music of the game are very much enjoyable and sort of captivating. I’d definitely recommend this game to any gamer because I was never fond of RPG games but City of the Shroud is very unique and different in its own way and a must try RPG title.