Battle Royale games such as Realm Royale, PUBG and Fortnite have taken over almost all of the other genres of games, day by day we see a new Battle Royale game showing up from new game developers, regardless of the platform, be it either PC, Consoles or even mobile phones, people love to play battle royale games these days. Even the non-gaming oriented people are striving towards battle royale fashioned games as these games are trending nowadays and coming out as more of a fashion. Most people like to say “Games are for nerds”, that’s not the case when it comes to battle royale games these days, as more of the non-nerdy people are playing these titles.

Realm Royale, a new battle royale game on the block 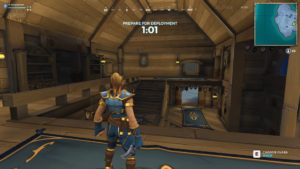 Developed by Hi-Rez Games, the game was based on a mode of Paladins in the beginning, but proved to be so popular that it was then turned into a game of its own by Hi-Rez Games.

Now, Realm Royale has just entered the Early Access mode on Steam for PC. The new battle royale game promises to offer the same intense, fast, expeditious gameplay that gamers seem to love these days, Realm Royale is offering a unique twist in the genre with it’s early middle-aged themed and several new features to separate it from the mega competition of Battle Royale games.

At the start of the battle royale, which consists of 100 players that fight until the end to stay alive, you get to pick one of five classes, each has its own passive finesse, movement, ability and a suite of class-specific ability pickups. The game is based on jumping and traversing rooftops, you can scout through mountains which based on heights.

The mounting element (Horse Riding) is a great addition to the world of Battle Royale, also adds a bit of MMORPG feeling to the game. Mounting is fun and being able to get on your horse at any point to run faster through the map or even dodge enemies at some point makes the game alot exciting, I actually roamed throughout the map on the horse more than on foot because its quite entertatining, However there is a little bit of a cool down if you stop the horse straight off, you can’t go back straight again but bascially you have access to a vehicle when you’re going around the map and that is your mount which is a relativey fast way of getting around the huge map.

After getting eliminated you are turned into Chicken and you will have to survive for thirty seconds to ab able to get revived which is very interesting, fun and unique in its own way. 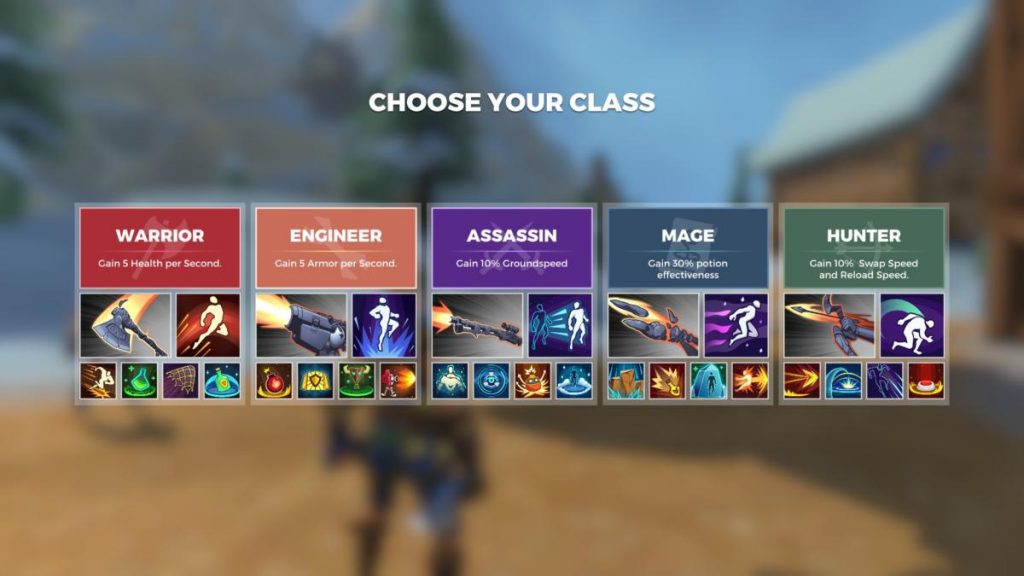 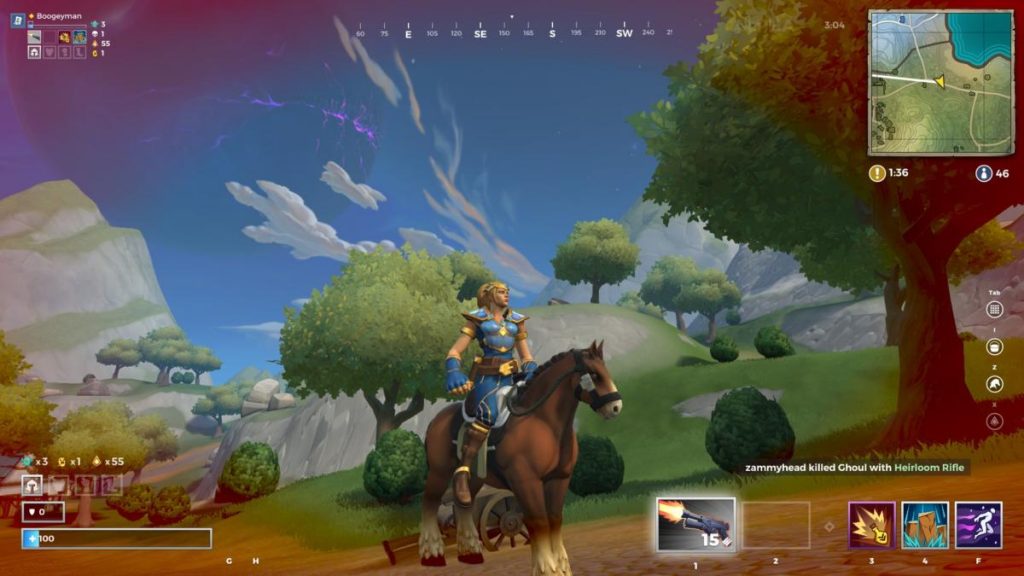 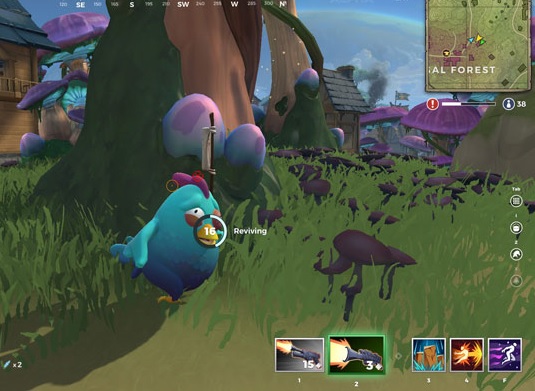 The main theme of the game

Realm Royale is set in a medieval era, the map is quite beautiful eastern themed, with a vast amount of mountains to jump through, take cover and scout throughout the 100 player battle royale mode. The city looks good, with mild, cartoonish textures covering the mountains, canyons, grass, and foliage.

The map is based on heights which is a good thing when it comes to distanced combat, the map is massive and all of the surroundings keeps the player interested. At least it kept me interested.

The game is based on the same timed death circle that we’re familiar with in the name of Fog, but there’s a special twist in the game which sets Realm Royale apart from other battle royale games, is the option to craft special weapons, through forges that are spread all across the map (We’ll discuss about the forges in a bit). 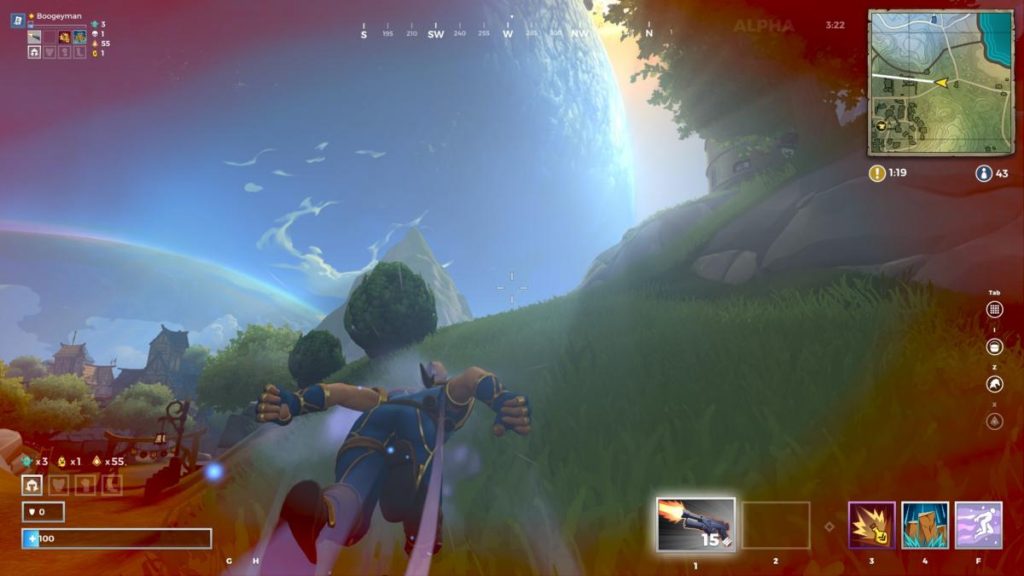 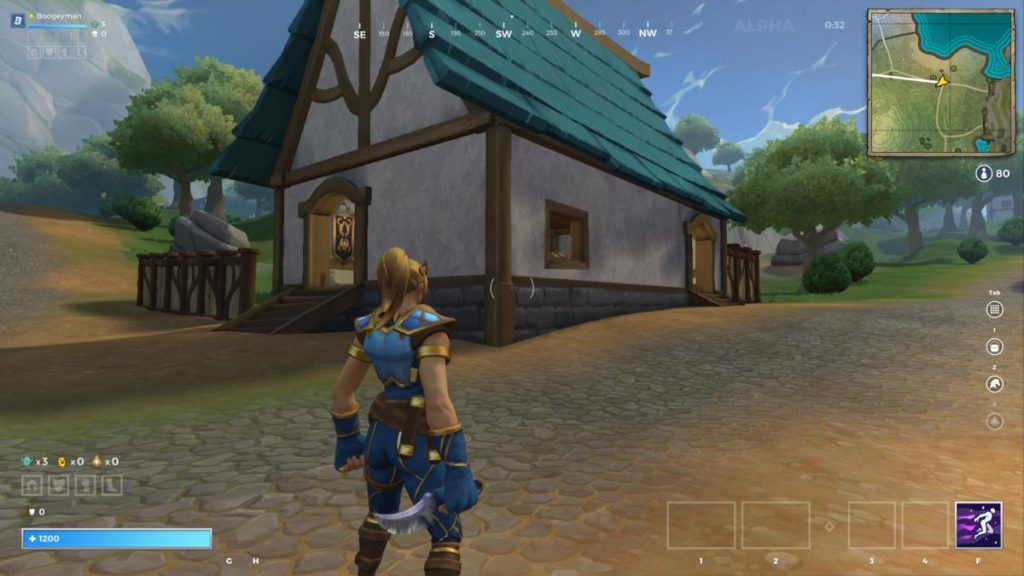 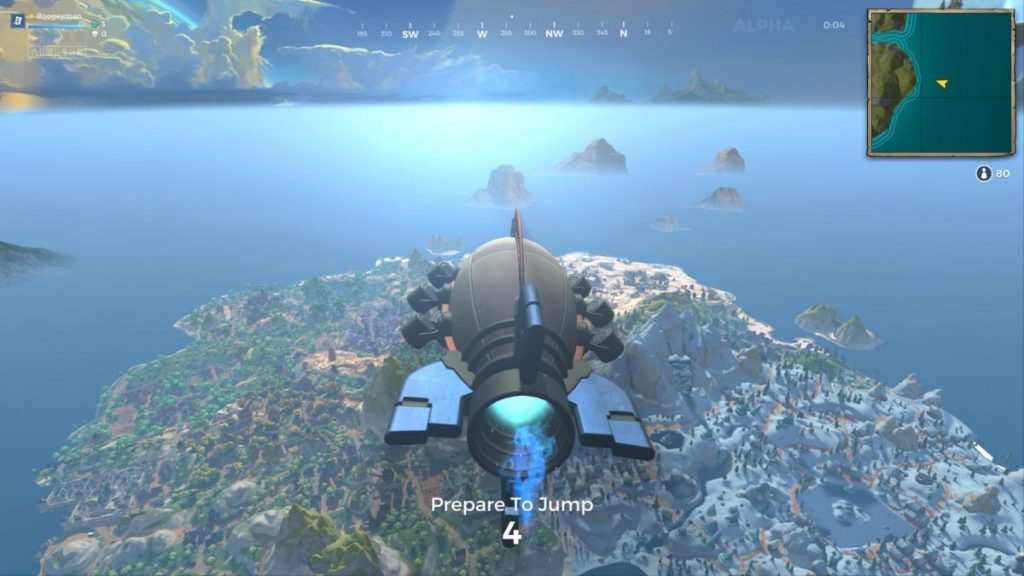 As soon as you hit the play button of Realm Royale, you’ll instantly get the feeling that this game is very similar to Fortnite, but actually, it’s not. What sets it apart from other battle royale games like Fortnite and PUBG is the main theme of the game itself which I’ve already discussed above.

The huge aspect which totally sets apart Realm Royale from Fortnite is that there’s no element of building walls or ramps, which means your survival instinct should be based solely on your loot, aim, legendary weapons and scouting skill. Realm Royale is more of a copy of Paladins, rather than Fortnite.

The most important addition in Realm Royale is the forge and crafting system. While crafting through forges is similar to Fortnite’s Vending Machines, these crafting stations can be found around the map in dotted form around the busy areas.

These forges let you acquire the armor, abilities and the best weapons in the game. Obviously, you will need all the materials to fuel the process of forging, these materials can be obtained by dismantling weapons and ability pickups but the process is based on a time period of a minute or so, the forge produces the very best items.

All in all the crafting scenario seems to be an easy job at first but if you want to go into the final few circles with legendary gear then you absolutely will have to fight for it. As of Fortnite and PUBG, the supply drops can only be acquired by picking up the drop before anyone does and also the drops spawns are random whereas, in Realm Royale, the forges can be found in 18 different stationary spots across the whole map.

To defend yourself or your squad in these spots is going to be somewhat hard, as all of the players know these spots and any squad can show up at any time to fight for the legendary weapons. Hi-Rez has integrated into this as much as possible by ensuring everyone in the area knows a forge is active, you’ll be able to hear a loud clinking sound and see smoke rise from its chimney.

As far as I think, all of the crafting and forging frenzy in the game is the thing that is keeping the players entertained and also it has a unique touch to it which sets it apart from PUBG and Fornite.

Realm Royale does have the benefit of a lot of physics and mechanics coming from Paladins, the gunplay especially feels relatively tight for an early access game. From my point of view the characters movement, jumping style, and the weapon handling are similar to Fortnite, But that’s just me.

The mechanics and physics of the game are not buggy at all, it feels smooth and vivid. Although since the original release the abilities have been tweaked a lot to fit the new game.

There are new abilities like being able to fly through the air or leap into the air roll across the ground. If you’d like to be more offensive you can throw fireballs at enemies, you can also swing over to fire a flare that can reveal enemies, sight enemies that have been gone past from a specific point on the map. 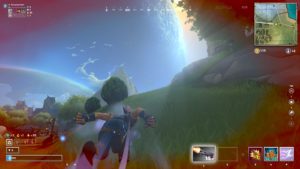 Do I think it can really challenge Fortnite? Well, probably not just because Fortnite has become such a huge giant at this point and has captured people outside of the normal gaming sphere. Although I think Realm Royale will get the following because it has a lot of potential.

The main factor is that it doesn’t have the building element which is going to attract many Fortnite players who just don’t like building, also the game has a bit of MMO feeling with the mounting (Horse Riding), general matte feel and the fantasy aesthetic over sort of the more modern gameplay.

The game is doing great as an early access right now. Looking at the steam charts, newer games often get popular at the start but end up going down after the starting hype. Twitch streamers are playing Realm Royale right now, which is also increasing the reach of the game day by day.  It’s only a matter of time we’ll be able to conclude that Realm Royale is going to last longer or not.

Callisto Protocol: How To Get Skunk Gun Schematics