Initially called Project Athia, Forspoken has been in the works for some time now. The action role-playing game was one of the first games Sony revealed for the PS5. The game makes full use of the graphical capabilities of the PS5. As a result, fans have been waiting for this one quite a lot. The release is still a few months away but the game has received a rating from ESRB ahead of this release.

ESRB has officially rated Forspoken “M for mature audiences“. The strong language and violence present in the game are the main reasons for this rating. The rating board has also given a summary of their rating explaining the decision.

Forspoken has a lot of violence. The violent acts in this game are the cause for a Mature rating. The rating board says that the battles involve cries of pain, killing, and screen-shaking. Other acts of violence are also present in cutscenes which include a character jumping off a building, monsters killing civilians, and a character held at gunpoint. So, the game has its fair share of mature themes.

Strong language is also very common in Forspoken. The cuss words “f**k” and “sh*t” are heard throughout the game. The player hears this language a lot through the NPC’s and the protagonist herself. Therefore, the rating is very fair considering all of these factors. The rating also gives us some other info about the game.

Forspoken will include in-game purchases according to the rating board. This is news to the players because we didn’t know this aspect of the game before. This isn’t something new for action RPGs as many other games in the past have included in-game purchases. But, this is new about Forspoken.

Forspoken is one of the most exciting PS5 games due to its use of the system. Developer Luminous have used the amazing graphical prowess of the PS5 to create this game. So, the graphical performance is going to be something beautiful to behold for the players.

The player takes control of a woman known as Frey in Forspoken. Frey is teleported to a fantasy world and has to find her way home through many challenges. She has magical powers in this fantasy world of Athia. Players have to fight the tyrannical rules of the Tantas to get back home to New York City.

Combat includes zombie-like creatures and humans. The player has to use special magical abilities to fight them off. Overall, the game has an exciting fantasy concept coupled with the mind-blowing performance it promises on the PS5. Forspoken is out May 24, 2022, on the PS5 and PC. 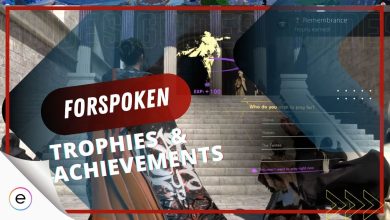