Intel is well-established company and greatly known for processors. However, it’s not their only product line they have been dealing in with. For past many years, there has been rapid expansion in their storage solutions category. Despite no groundbreaking achievement in storage sector, Intel’s 500 series SSD has reached the mainstream consumer market. In 2013, Intel launched it’s 530 series SSDs, which replaces the 520 series with much better endurance and synthetics speed (on paper).

Today, we are taking a look at the Intel 530 series 240GB 2.5” SATA 3.0 (6Gb/S) SSD. The SSD comes in a 240GB capacity, has a supported interface of SATA3 (6Gb/s) and backward compatible to SATA2 (3Gb/s) offers much better and reliable results over SATA2. With Intel NAND technology, having 20nm MLC (Multi-layer Cell), the drive offers faster read and write performance against the precedents on papers. 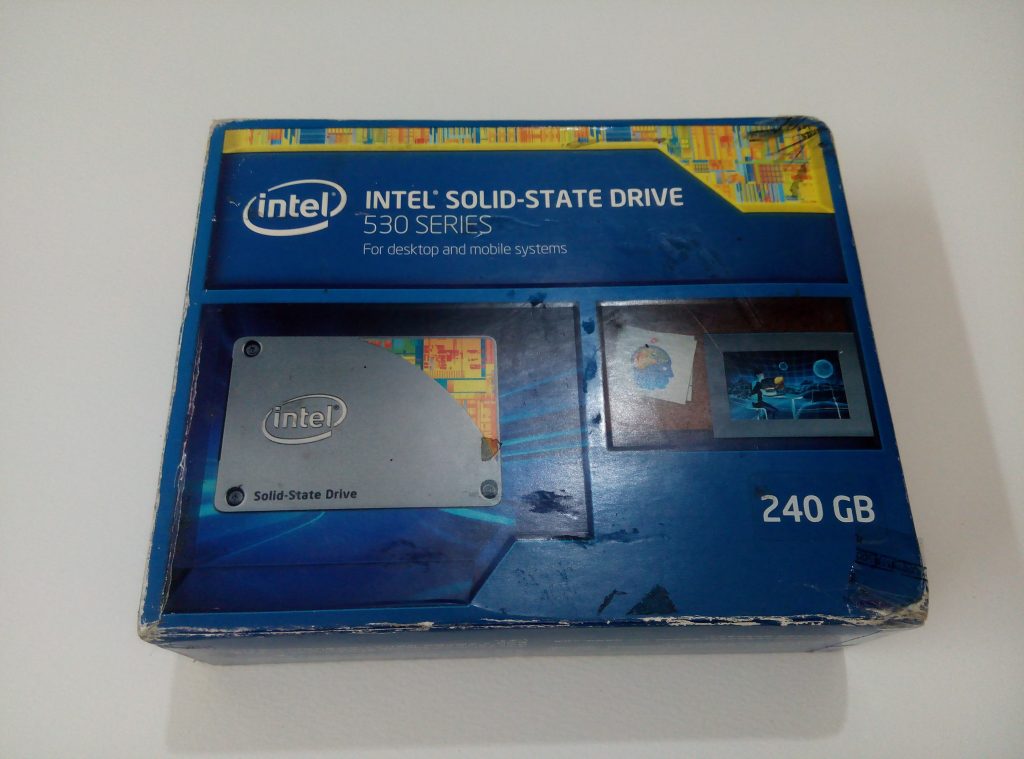 The SSD comes in Intel’s typical blue box packaging. The similar kind of box that you might have got around you with Intel processor. The box has Intel logo at very top, next to it, is the Intel ‘Solid state drive’ 530 series written. The SSD is pictured at lower part and lonely 240GB at corner. Not to mention the circuit board design at top. 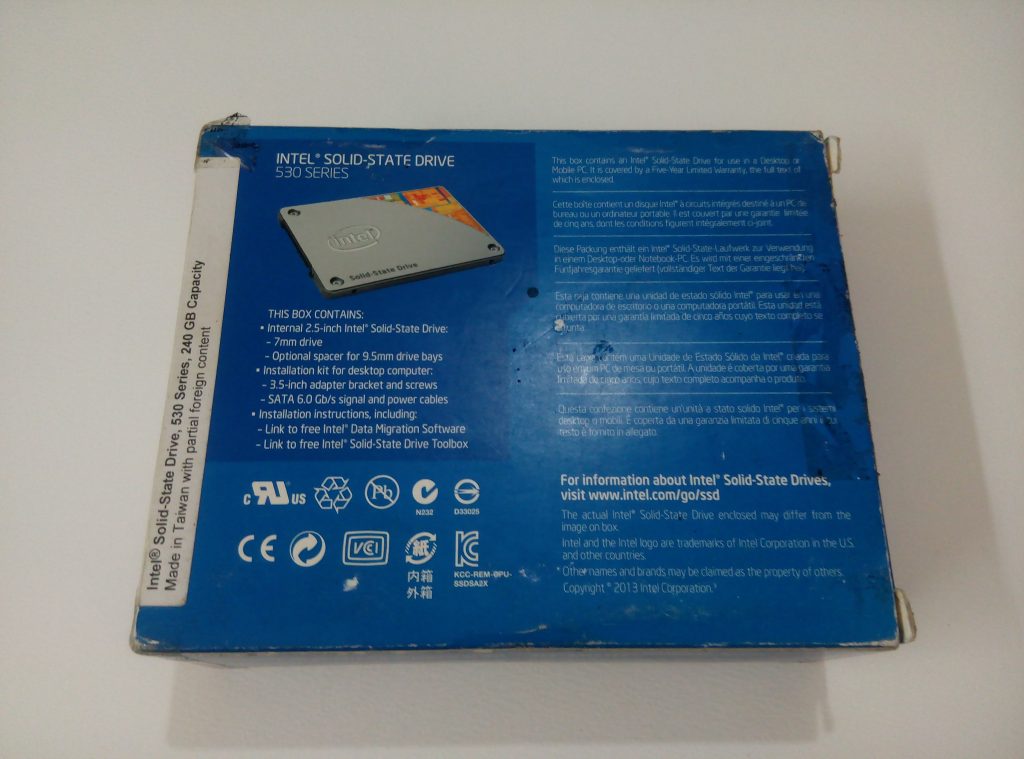 On the back, we can see again the SSD picture and below the contents in the box features. The right side delivers information in multilingual. 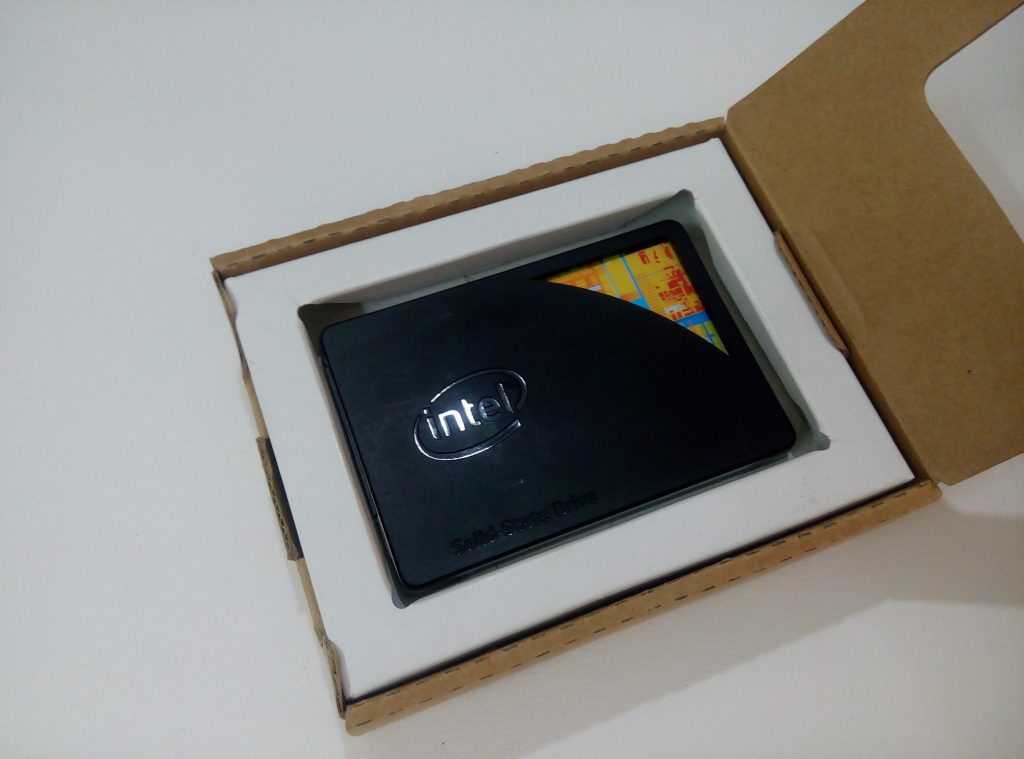 Once we open the box, a brown cardboard box appears having a look inside with round cut on it. Once we open this layer, we get another packing in white, which contains SSD with a separate 9.5mm plate. The bottom layer has a bag of screws, a manual and installation steel plate. Honestly speaking, that steel plate gave a feeling of an old age floppy part, really. 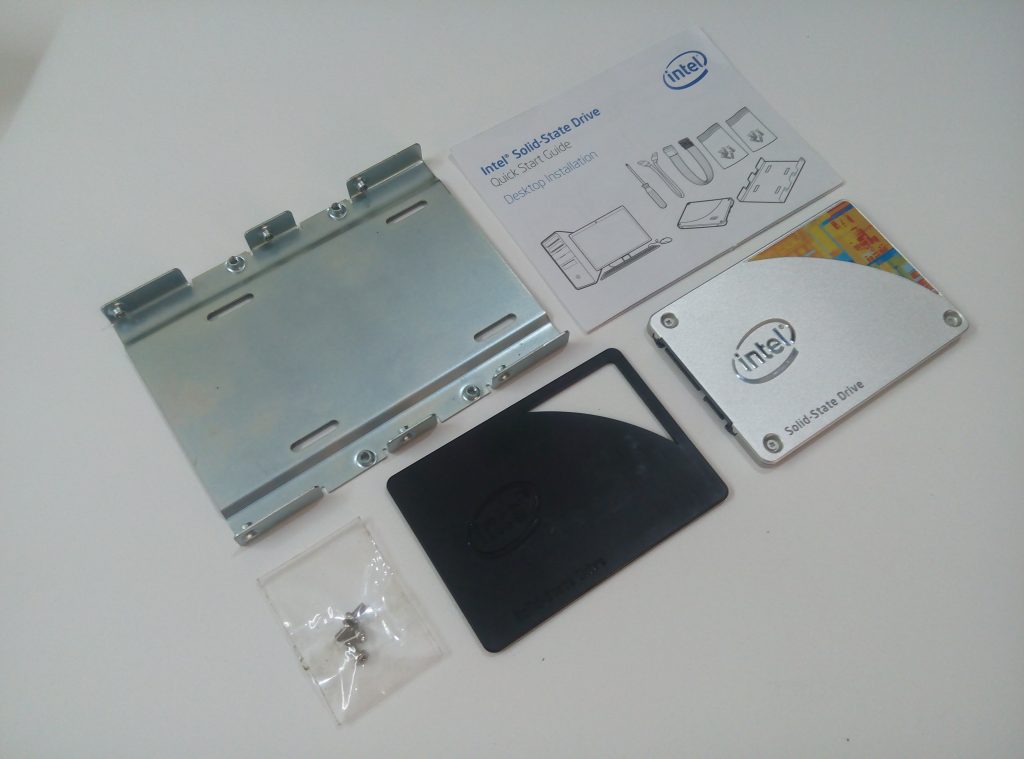 Out of the box, you will find these items including SSD and all the extras. 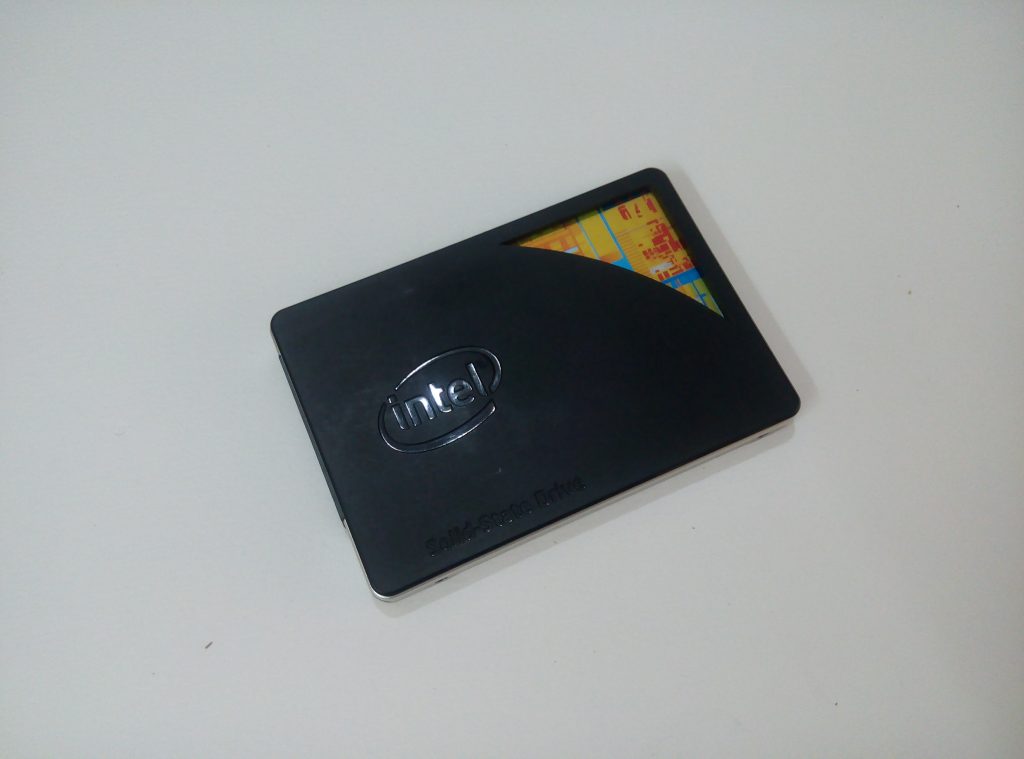 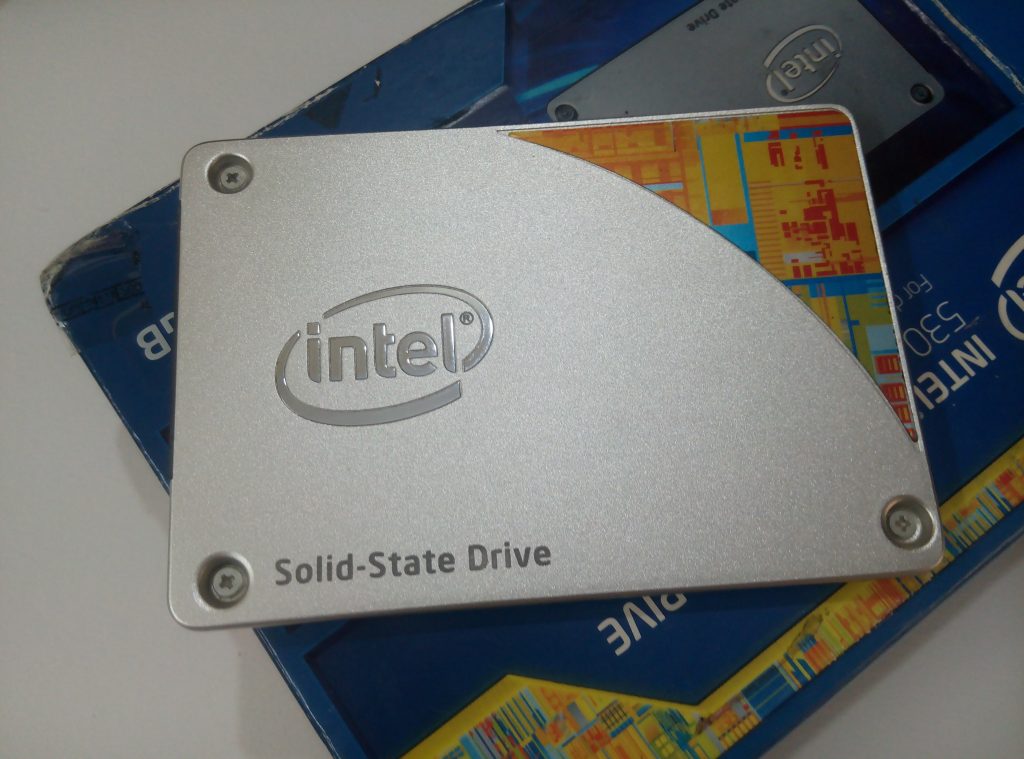 We take out the SSD from white layer packing. The black 9.5mm plate is being placed on top of SSD. We didn’t receive the plastic bag though. This 9.5mm plate has intel logo and Solid State Drive below to it. Moving on to SSD, the first impression is pretty neat and shining. A 6 x 4.3 x 0.9 inches SSD, having silver color scheme is pretty interesting, a different if you ask me. Yes, it never gamers’ choice but there is nothing wrong either. The corners have the enclosures with 4 silver screws on each ends, while Intel’s popular circuit board design is put on corner. 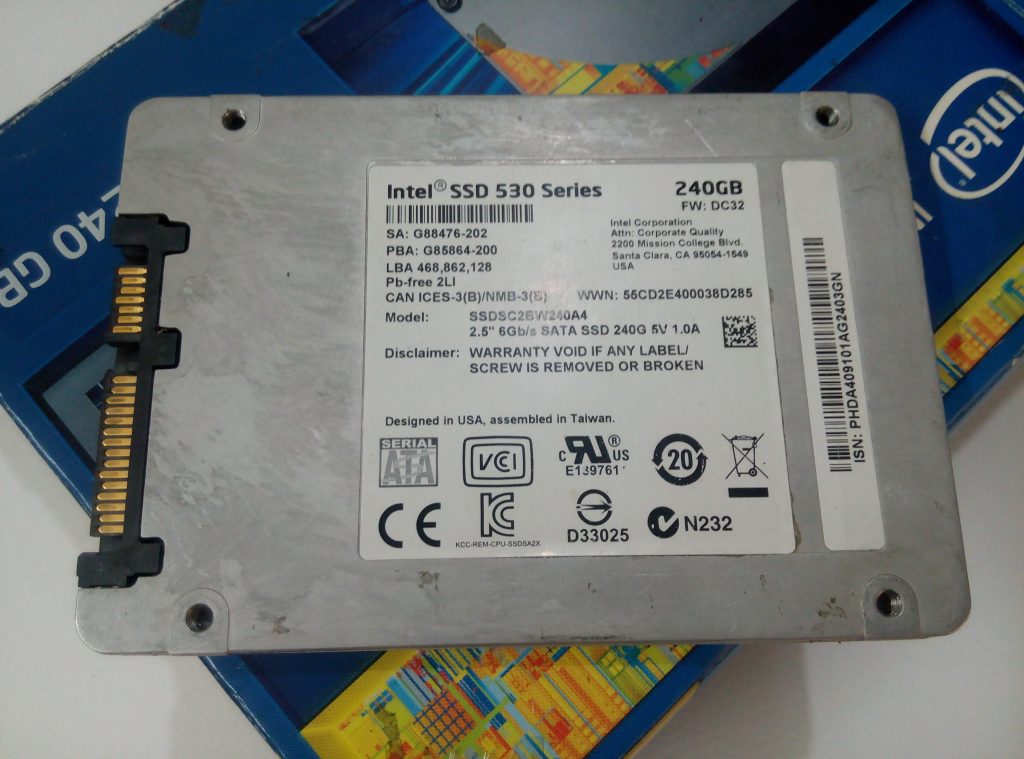 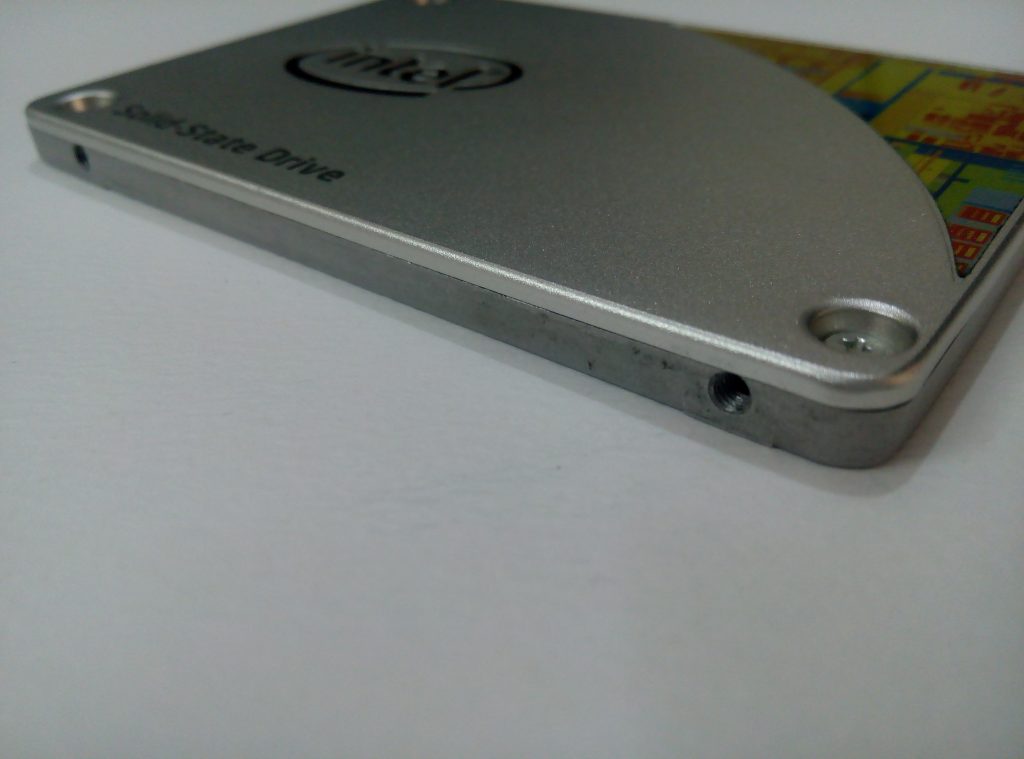 The backside, on the other end, is also silver but having a rough surface look with a huge barcode sticker, offering tons of technical information related to SSD. The screw gripper on each end that accommodate the installation process in PCs.

The Intel 530 series 240GB carries LSI SandForce 2281 controller offers faster and sustained speed. The rated read and write is 540 MB/s and 490 MB/s respectively. That’s being said, the practical results may vary. Intel has advertised 530 series as to be more power efficient and reliable. It uses about 140 MW on active and 55mW on idle, not bad at all. This is using Intel NAND technology MLC to increase the speed and endurance, which is not better than SLC but falling in the middle of SLC and TLC. The MLC type SSDs reducing cost which is why we see most companies are jumping to MLC and then TLC. However, SLC offers higher performance which also costs more. 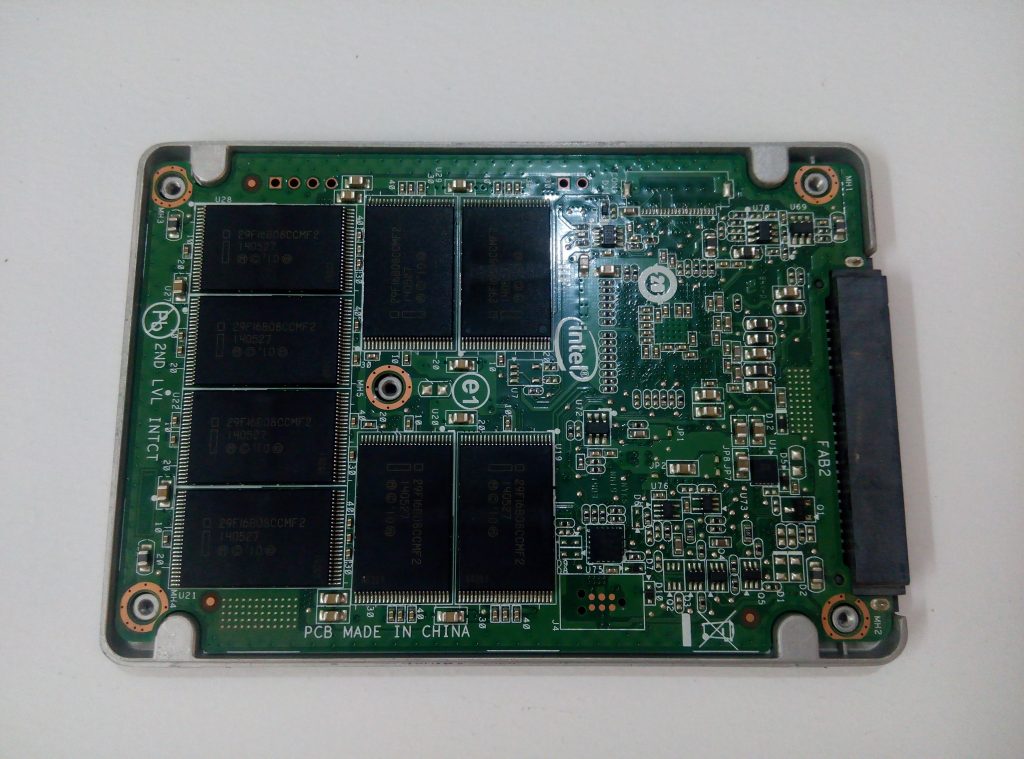 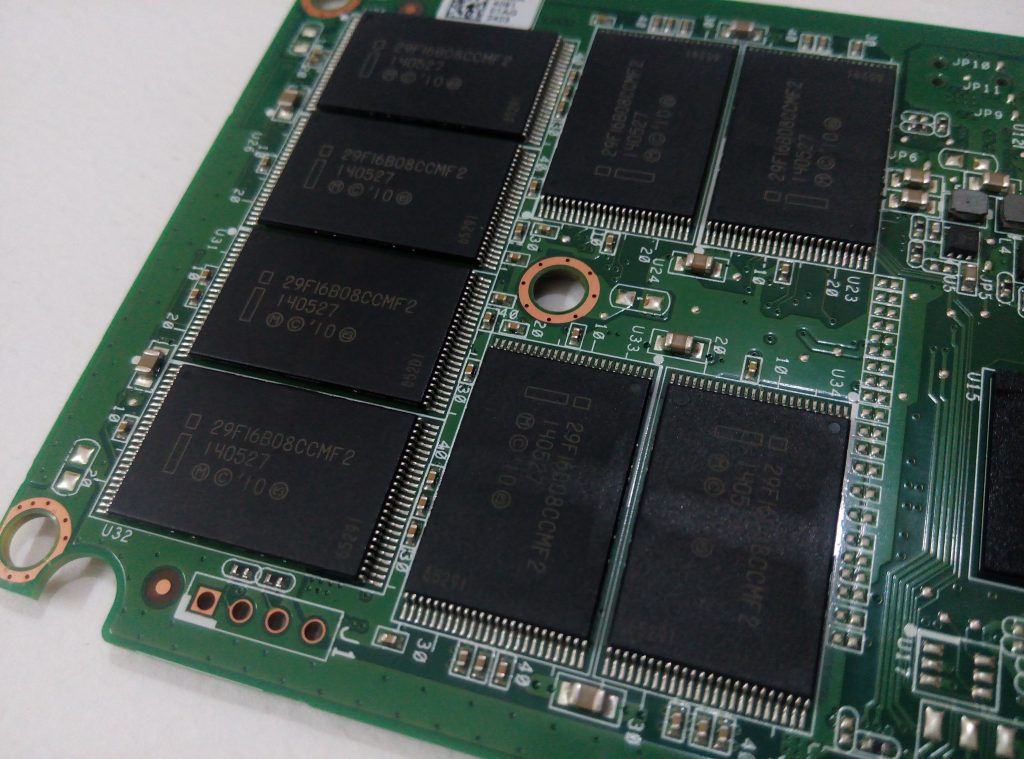 Inside the drive, we have a huge green PCB covering the whole case area. Unlike the Samsung drive which has tiny PCBs inside the cases. The Intel series 240GB PCB displays 16 blocks of 20nm NAND flash packages (8 blocks on each side of PCB). The Intel logo just beside the block on upper area. On other side, there is a LSI SandForce-2281 controller placed in middle to right area has model number printed on it. 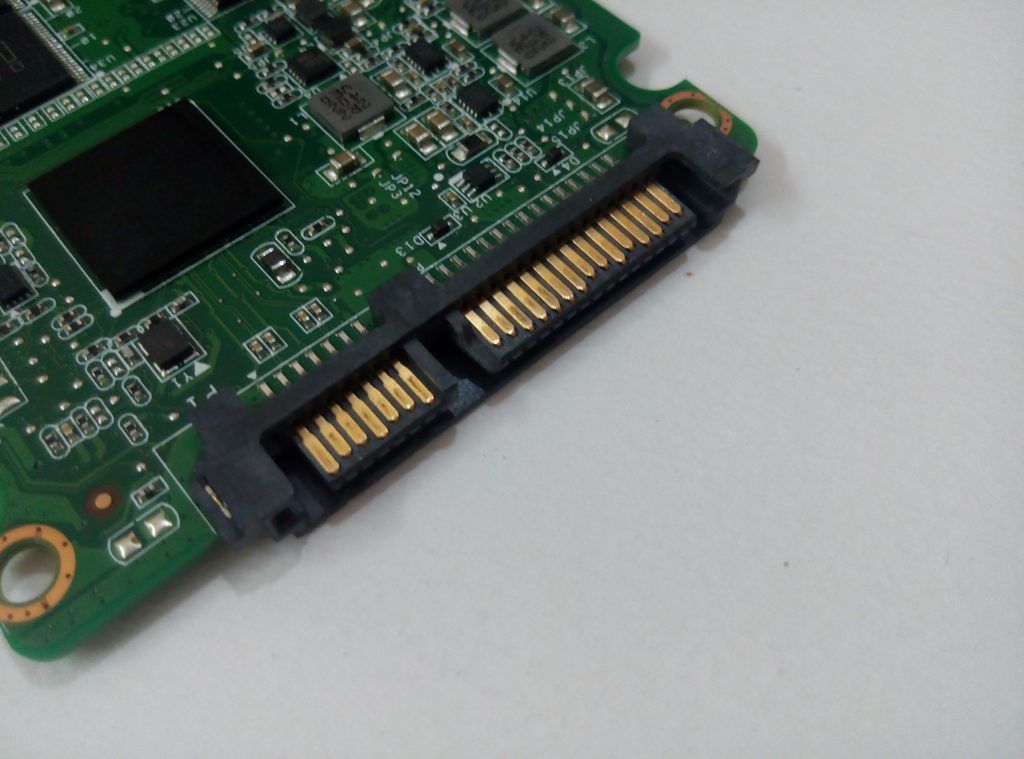 Here, you can see the SATA 3 connection that offers high speed via 6 Gb/s given motherboard supports SATA3 which is unquestioned here, Today, every motherboard comes with SATA 3.0 ports. One the high is the SATA power port, while Serial ATA 3.0 is on left. Note that, SATA 3.0 only works when you have a compatible cable i.e. SATA 3.0 certified cable, only the it provides faster and closer to advertised speed. The SATA2 or 3Gb/s only under 300 MB/s. 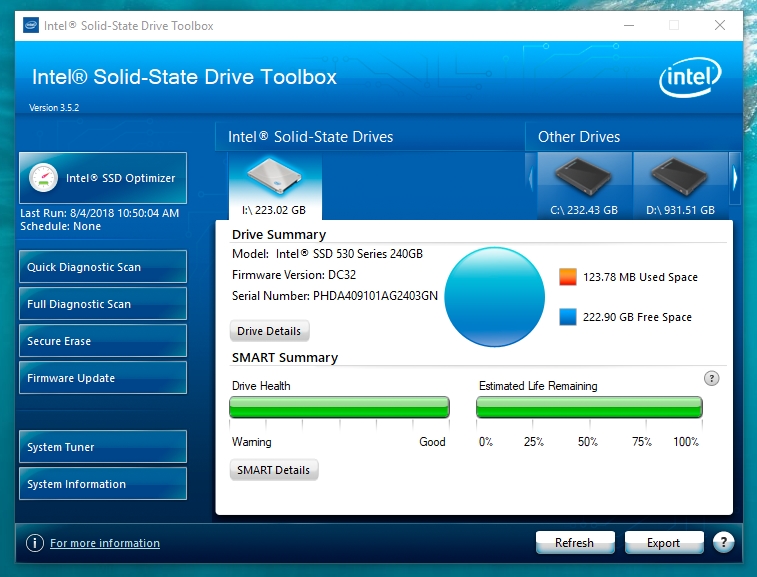 Before we even put it on test,  we begin optimizing the drive by using dedicated Intel Solid State Drive Toolbox. After formatting the drive, it left us with 222 GB out of 240GB and that’s almost 18 GB sacrifice on capacity.

Testing a consumer grade 2.5” SSD involves great amount of synthetic as well as real world programs testing. We looked towards synthetic benchmark on our first go, which revealed the read and write speed and also, the access time (boot times/loading times). The first three software listed above were used to evaluate SSD’s performance synthetically. However, for real world performance and relative strength, we picked some real world usage workloads i.e. copying file and writing on drive via WinRAR, that are also included in our methodology. This will especially help us understanding the actual potential the reviewing unit has got. Our motherboard is merely updated to the latest firmware, being at 6th generation, the motherboard provides full support for anything a storage unit could demand.

It’s started with AS SSD benchmark, which is toughest benchmark to bring the desire result. It uses uncompressed form of data to manufacture results.

In AS SSD benchmark, Intel 530 boasted a high 482 MB/s sequential read and 212 MB/s Sequential write. While very competitive in read speed, our unit has showed poor performance in write block, specifically in sequential.

Next up is the Crystal DiskMark benchmark, where Intel 530 has maxed out the numbers with an aggressive 544/223 MB/s sequential R/W. again, very good in seq. read but poorly write performance when compares to Samsung 850 EVO.

The HD tune Pro works quite simple. The transfer speed resulted around 329 MB/s on average, while the access time is 0.137 ns. A little higher access rate for an SSD.

The Anvil Pro is one of the most detailed program, that offers sequential and random results comprehensively. The Intel 530 series SSD  done pretty well in sequential 4MB read with 490 MB/s, however, we again received backward result in writing spectrum of the performance, and the response time in write is also not looking good. 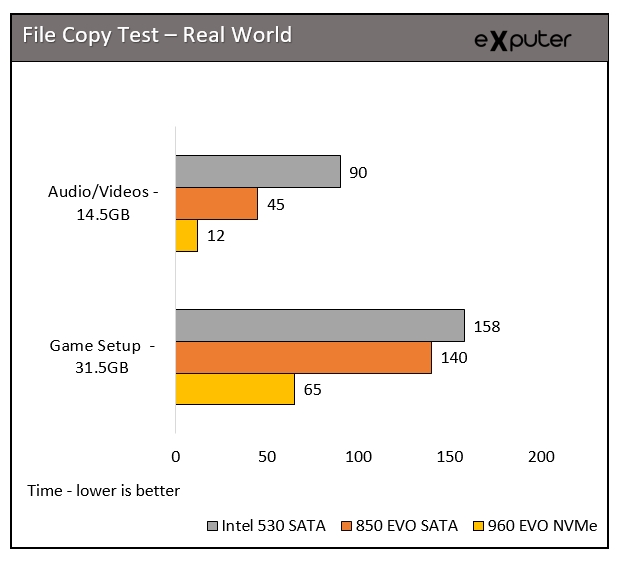 In order to test the drive in real world applications, we chose a file-copy test. We are not gauge with any program if you are thinking, but a typical copying of a file/folder from one drive to another. So we took Plextor M9PEG as a source drive and Intel 530 240GB as target location (since we are testing Intel 530). In our methodology we transferred a 31GB game setup Folder (uncompressed file) from M9PeG to Intel 530 SSD. It read the folder at speed of 502MB/s on average file, while 1.08GB/s maximum. It took about 158 seconds to transfer the folder in reviewing drive. The speed variation was like peaking at beginning and till the mid, later it started to dip with 105 MB/s minimum.

We then tested out another files transferring, this time we took a folder containing many videos with total size of 14.5GB (audio and video). Having read speed of 840 MB/s on peak, Intel 530 240GB took about 90 seconds to read the whole file. Neither too bad nor good for an aging controller. 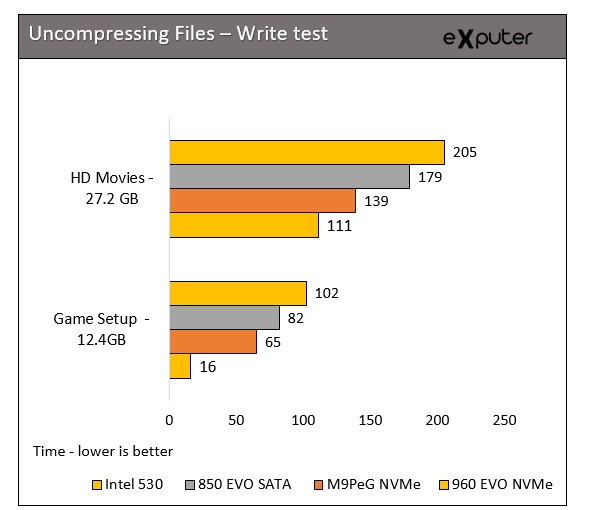 Next is the Uncompressing desire folder using RAR file, we will uncompressed the files, Where Intel 530 240GB, Samsung 960 EVO, M9PeG NVMe and 850 EVO SSD put into write test. A 12.5GB compressed, ISO/RAR file of a Game, Evil Within, placed in sample drive and begin uncompressing, that took 102 seconds Intel 530 to uncompressed the files/folder. However, when the same task’s been assigned to Plextor M9PeG 256GB, Samsung 960 EVO and Samsung 850 EVO 256GB drives, the results were like 65, 16 and 82 seconds, respectively.

Another, yet a large compressed file brought to test the NVMe drive and compared the result with other drives. We arranged the Movies in a folder in compressed version of 27.5GB (all 720/1080p movies). Started off with uncompressing in Intel 530 which took about 205 seconds, while Plextor M9PeG made it in 139 seconds, Samsung 960 EVO in 111 seconds and Samsung 850 EVO done the same in 179 seconds. Overall, Intel 530 240GB is perform like some of mediocre drive out there.

Intel 530 series 240GB is an easy plug and play drive like any other high compatible drive. Offering SATA3 bridge which connects and delivers high speed 6 Gb/s performance overlay. With Intel NAND technology, the drive offers high durability which is why the Intel has put a great faith in 530 series by offering huge 5 years’ warranty. The Intel 530 has a software support, Intel SSD toolbox, which optimized the drive for better performance. The same software is used to check update the firmware. However, the kind of color scheme Intel chose is not all the way favorite in gaming community.

Coming to performance, the Intel 530 series 240GB unit has showed exceptional sequential speed in synthetic benchmarks includes Crystal DiskMark, Anvil Pro and AS SSD, but the speed collected from write segment is not exactly sparkling. The highest achievement was 223 MB/s happened in Crystal DiskMark benchmark. The reason why it hasn’t performed -comparatively well, could be due to lack of any serious technological advancement inside SSD structure (apparently built-in acceleration programs have improved the write speed for competitors by miles). Nonetheless, it is quite faster and superior to Hard drives.

The Intel 530 series specifically 240GB is selling at $199 (at the time of this review) on Amazon. The SSD is just OK but the price is rather high for the said capacity and definitely not taking attention at all. But offering 5 years warranty is a huge advantage. Intel 530 series 240GB could be an OK choice in this regard. However, we might want to add a few words that there are precisely better options out there in terms of price-performance ratio. 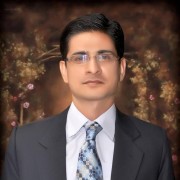 I am a tech reviewer who loves to play with the hardware and do an in-depth analysis of the hardware for the content creation. I have over 120 contents to my credit and this number is ever growing. Besides, I love to assemble PCs and do troubleshooting.