As the sequel to one of the most critically acclaimed indie games of this generation, Spelunky 2 carries forward the spirit of its predecessor by being one of the most challenging roguelikes you’ll probably ever play.

Don’t let this game’s attractive graphics and adorable art style deceive you, Spelunky 2 will beat you down again and again and again. And just when you think you’re getting the hang of it, it will pull the rug out from under you once more.

This game is very hard, and so here are some tips on how to avoid deaths in Spelunky 2.

This is a game about descending into the depths of the earth, so part of that means being aware of where you’re going to drop. Always hold the down button on your Keyboard or Controller to take a look at the platforms and ledges below you.

Never be hasty; the last thing you need is to jump blindly into a trap.

It does not pay to be unarmed in Spelunky 2, so it’s an excellent idea to always have something in your hands.

It doesn’t matter what it is, keep something in your hands at all times so you can toss it to attack enemies from a distance or activate deadly traps from afar.

Rocks should generally be your priority since they are easy enough to find and are also unbreakable. Therefore you can always reuse them. They might not be the best weapons, but they are abundant.

Be Vary Of Vases 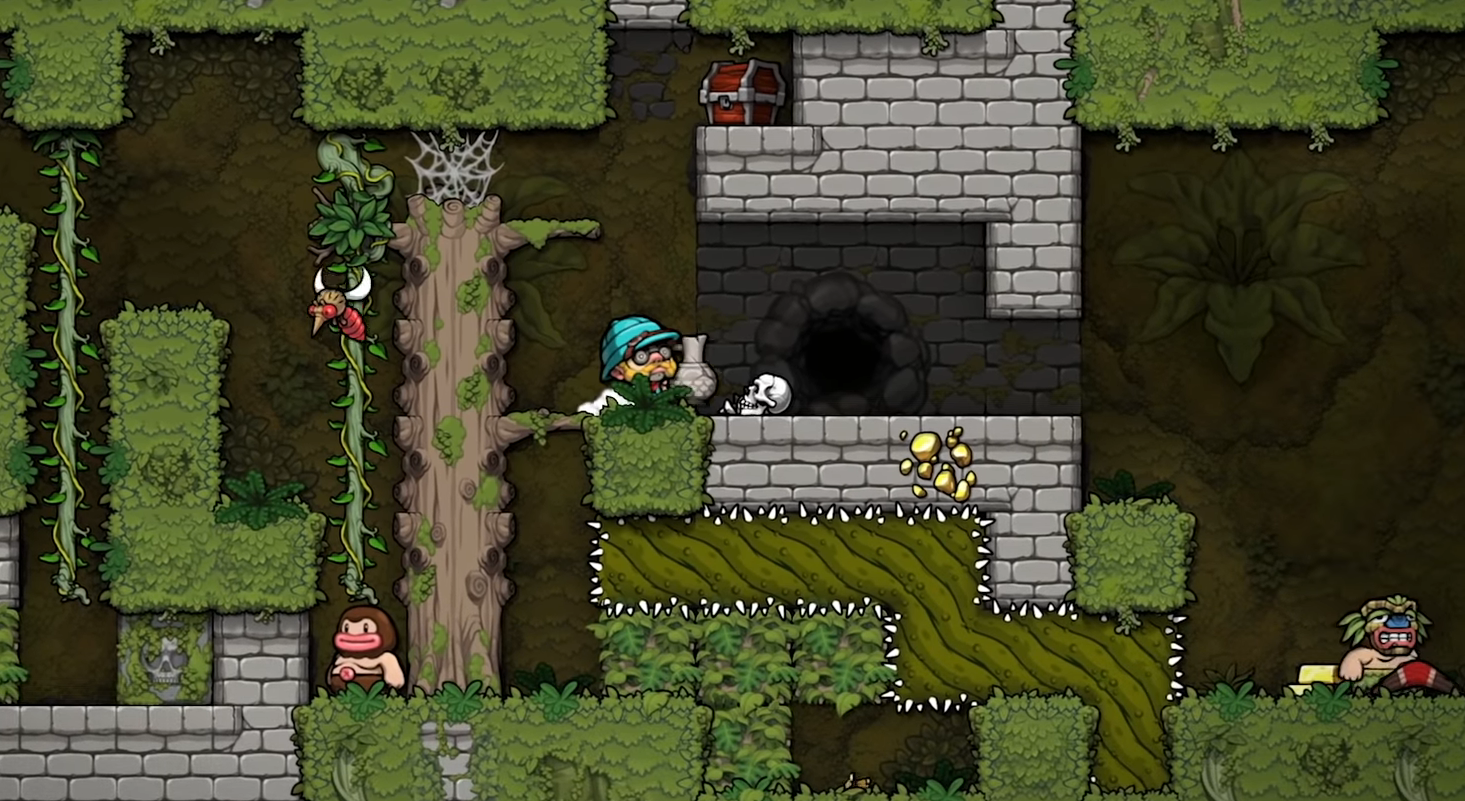 Now there’s an instinct in gamers to break vases whenever they see them in a game, but trust me when I tell you that this is a terrible idea in Spelunky 2. Just like rocks or skulls, vases are yet another item in the game that can be picked up and thrown, and you should always do exactly that.

Although vases can be broken right where they are with the use of your whip, there is a high chance that they can contain enemies that can score an easy hit on you if you do so. So to avoid taking a cheap hit, it’s always a good idea to pick up and then throw vases away from you to distance yourself from any potential enemies.

Please don’t throw them into dangerous trap-filled areas though, because they may also contain valuables that you might not want to lose.

Don’t Steal From The Shopkeepers

Now there are some creative ways out there to deal with the shopkeepers you will encounter in Spelunky 2, but inexperienced players should try not to offend these NPCs if possible.

Be careful not to accidentally attack them when inside their shop, and definitively make sure to pay for any items you pick up before you leave. The shopkeepers can be quick, lethal, and when they retaliate, they will make short work of you.

Spikes are a reasonably common trap in the game, and regardless of whether you encounter them at the start of a run or the very end, they can be a massive hindrance to the player.

Keep in mind that while it is deadly to fall onto spikes, you can very easily walk through them if you happen to be on the same level.

So if you encounter a situation where you have to jump across a pit of spikes, instead of leaping and potentially harming yourself, try to get on the same level as the spikes and walk through safely.

In each level in Spelunky 2, there will be a Cat, Dog, or Hamster that you will encounter depending on what you chose in the options menu.

And although doing so isn’t always convenient, rescuing these adorable pets is recommended since they restore one point of health when you carry them to the exit of the level. These pets can also take you over your initial starting health pool if you manage not to get damaged during a level.

Just be warned that once you pick these pets up in a level, it’s not a good idea to put them down again unless you can find a very secure hole to deposit them in. They aren’t moving when you encounter them for the very first time, but they start running once you put them down again, and they can activate traps.

Use Mounts With Caution

In Spelunky 2 there are a few different wild animals like Turkeys and Axolotls that the player can encounter while exploring. These animals can be mounted to provide benefits like the ability to double jump or launch projectiles, and they can also act as shields that can take little damage on behalf of the player.

While having these animals as mounts is without a doubt beneficial, the very act of mounting is risky since these creatures start running around very erratically when you do so, and virtually walk into traps and other hazards with the player on their back.

So if you decide to get a mount, make sure to get rid of any nearby hazards first if possible.

Spelunky 2 might be a roguelike, but it is not a game centred around combat. And as such, there are no rewards or experience points you can gain from defeating enemies.

There is no point in picking fights when you don’t have to, and it mostly isn’t economical in this game to kill every enemy you come across.

So avoid fighting until it is necessary to do so to progress to the next level.

Learn The Physics Of The Game

Most tools and actions in this game have some sort of physical reaction that players need to watch out for.

Shotguns have massive recoil that can knock you backwards. The whip can damage things behind you when you use it. The jetpack is flammable and can set things on fire. And thrown objects like rocks can ricochet off surfaces and hit you.

Experiment with each item and learn how it behaves when you use it. You don’t want any surprises during a run.

These are some of the ways you can avoid dying in Spelunky 2. It’s a challenging game, and the way to beat it is to keep practising again and again with these tips in mind.