Last of Us is a beautiful open-world interactive game that features tons of collectibles, supplements, and training manuals that can boost the player and provide buffs for them. Apart from that, our Last of Us Part 1 Weapon Locations guide will showcase all nine weapon collectible locations for you!

Let’s explain what weapons are and where they can be found. In essence, weapons are just basic collectibles that will be added to your inventory and can be a completionist’s goal to collect fully.

The collection of the weapons isn’t all that important, but players that have progressed through the main storyline will certainly enjoy doing so. There will be nine main weapons, 9 of which will be collected, while some others will be a part of the storyline and can’t be used again.

While roaming the open-world map, players will be able to get their hands on the weapons by being able to loot them off of innocent NPCs that have been slaughtered or simply died. Make sure to read up on our Last of Us Part 1 Firefly Pendant Locations guide!

Players will be on top of a giant tower extremely high up from the ground, starting with the first weapon. The first weapon will be located in an area known as “The Outskirts,” and players will need to be in the downtown area.

Players will start by starting on top of the tower, and while you’re hugging the wall, ensure you don’t end up falling from the tower. While hugging the wall, slowly walk towards the edge until the wall gives a left turn, and you can safely stand on top of a platform that is a lot more protected.

There will be an entrance that will be located beside a shattered window, and the main flight of stairs will be covered with broken storage cases and class desks. Steer left a bit and start moving down the stairs, and when you reach the ground, you will need to take a right turn and head into the room that is available to simply enter due to there being no door.

The next weapon in Last of Us will be located in the outskirts area, and players will once again need to head over to the downtown area. Players will start by being in an area that will be completely abandoned, and it will be dark all around.

From your original starting point, start slowly moving your way across the corridor, taking in the other available rooms. If players want to, they can cross the corridor to get their hands on a few other collectibles or simply wander around.

But after doing so, head back to your starting point and head over to a dustbin that will be colored grey. There will be a bottle beside the dustbin, and inside the bottle, there will be a weapon that is encased. Pick it up, and interact with it so that it can be added to your inventory.

Once you head over to the Capital Building, players will start by being surrounded by a patch of grass, and they will be inside the main building. The room will be covered in the grass due to being eroded and taken over by nature.

From there, you can pan your camera around you to take in the details of the furniture that is present around you, and if you look in front of you, there will be an opening through a wall that has been ripped through.

Players can carefully tread in front of the wooden planks and enter the area by jumping down onto the other room that is yet again covered by patches of grass. From there, start sprinting over to an NPC that is lying dead, and it is propped up by a pillar that has been colored teal.

Click on the triangle on our controller to interact and pick up the weapon.

Moving on, the next weapon that players can access will be an area known as Bill’s Town, and players in Last of Us will need to make their way over to another sub-area called “The Woods.”

When they are at the starting point, they will be surrounded by a brick building, and it appears that players will be in the backyard; in front of you will be a barricaded area covered by abandoned cars and wood planks.

From there, start heading forward, and players will encounter a ladder leading against the backdoor of an abandoned truck leading up. There is no other way to make your way to the weapon except by climbing up the truck, considering the actual weapon will be located on top of the truck.

Once you start climbing up the ladder and reach the top, you will be met a few other collectibles that can be added to your inventory as well, and there will also be a couch on top. Clicking on the triangle button on your controller will gain access to the weapon collectible, and you can keep it. You may find our Last of Us Part 1 Best Weapon Upgrades guide helpful!

The fifth weapon in Last of Us can be encountered once you officially enter the Pittsburgh storyline and progress through it. Players will be able to encounter tons of training manuals there, so make sure not to miss out on those while you’re on the hunt for the weapon!

Once you are in the Pittsburgh area, players will need to be in an area that will seem like an abandoned garage, and it will be filled with storage boxes, including metal and cardboard boxes, as well as a few metal shelves.

From this point, start making your way deeper into the abandoned room, and you will encounter a metal shelf that will be placed alongside a couch and two abandoned chairs. On top of the shelves, there will be a few basic collectibles, while there will also be another collectible that you can pick up and add to your backpack in the middle of the shelf.

The weapon itself will be placed two rows down from the top of the shelf, and it will be a circular weapon covered by a piece of paper. Interacting with it will simply hand over the weapon to the player. Do not miss out on our Last of Us Part 1 Weapon Tier List to find out which weapon works best in-game!

Next up, the next location that players will need to make their way over will be the suburbs, not the overworld part of the suburbs, but rather deeper underground and into the sewers. Once you are inside the sewer area of the suburbs, you will be met with a yellow or green basket or storage case hung from the ceiling with a bunch of ropes.

Starting from that point, players can take a second to examine their surroundings, and they will find nothing valuable except for a few abandoned pipelines and broken-down air conditioners. Start making your way deeper into the sewers, but your path will be blocked by a few metal and wooden planks.

Jump over the planks, and head over to the other side, and you will encounter a few items, most of them being useless, like a few chairs, a table, a lamp, and a few books. The actual weapon will be a small handgun that will be colored beige. It can interact with it, and it will be automatically added to your inventory after a small cutscene showcasing the weapon.

The Last of Us Part 1 Weapon Locations for the seventh weapon can be encountered once you make over your way to Tommy’s Dam, where yet another collectible which will be a training manual, can be found as well, so make sure to make a little detour after getting the actual weapon to grab it!

Once you’re at the hydroelectric dam, your starting point will be outside, and you will be on a pathway that will be broken down, and there will be patches of grass surrounding you everywhere. Right in front of you, there will also be a few trees and an abandoned car in the distance.

From the main starting point, players in Last of Us Part 1 want to start making their way ahead, which will allow them also to admire the beautiful scenery around them. Cross your path and keep crossing the main path until you encounter a few purple flowers.

From where the purple flowers are located, steer a bit to the left and start heading off the main path and onto the patch of grass; from there, you will start getting close to the abandoned jeep that is mildly sunken into the ground. Right beside the jeep will be the weapon.

The eight weapons will actually be located in an area that will simply be known as the university. Still, the full name of the university will be the University of Eastern Colorado, and the eighth weapon will be located there.

While at the main gate, the player will be surrounded by brick walls that will guard the university, and a big gate with the university’s name will be placed right in front of the player.

From there, start by either being on foot or a horse, start making your way through the main gate and keep heading through the main path that will be beaten up and covered by patches of grass.

Go straight up, head right, and get off your horse; the weapon will be located inside the warehouse.

As for the last weapon, players will make their way over to a location called the Firefly Lab. One thing that players will need to keep in mind is that the area will not be safe. There will be many enemies; therefore, ensuring your safety and taking them out will be pretty crucial.

Once you are in the Firefly Lab, you will be immediately encountered by an enemy who you can easily shoot down to take them out. While you are done taking them down, ensure that they are dead, and then slowly make your way through the main hallway.

A few machines will block your path, and players can easily make their way around them and continue on their hunt. The actual weapon can be obtained once you are done killing off the enemies and can be picked off their dead bodies and kept to yourself.

Once again, players can take shelter behind a few storage boxes from the starting point until they are ready to shoot down the opponents. Our Last of Us Part 1 Comics guide will be helpful if you’re trying to get your hands on them!

Apart from the nine main weapons, players can also encounter a few miscellaneous weapon-type collectibles that they can come across.

There will be a nail bomb that players can get when players get to a church with Bill, and he’ll end up doing a small favor and make you the bomb itself. Apart from that, players can also get their hands on a health kit, shiv, melee weapons, and a switchblade when searching for other collectibles.

That wraps up our Last of Us Part 1 Weapon Locations guide! 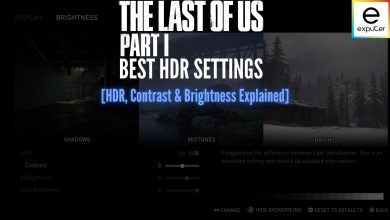 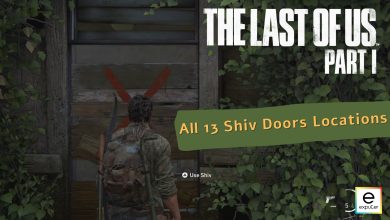 Last Of Us Part 1 Shiv Doors: All 13 Locations 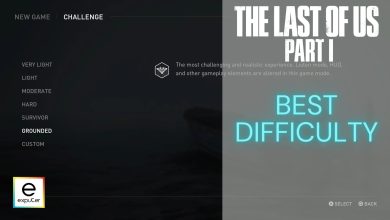 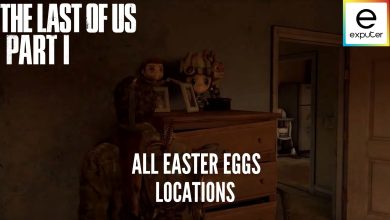 Last Of Us Part 1: All Easter Eggs & References 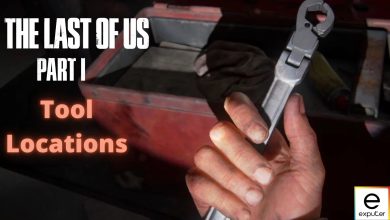 Last Of Us Part 1: All 5 Tools Locations 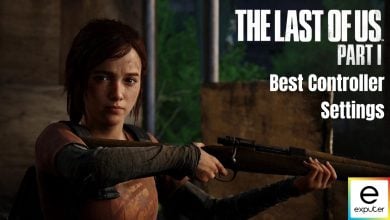