The Blood Moon is one of many different events in Terraria that switch up your playthrough’s gameplay in some unique and exciting ways.

During this, the entire map takes on an ominous red tint, and a number of special new hazards are introduced into the world. Simultaneously, a bunch of unique drops and items are also made available, none of which are accessible outside of the Blood Moon.

So this guide will show you how to survive the challenges of the Blood Moon and how to make the best of the event and farm useful resources and items.

When Does A Blood Moon Occur?

There are only two different criteria that need to be met for the Blood Moon to occur.

First, there needs to be at least one player in the world that has a health pool of 120. This means that they have to have used at least one Life Crystal to increase their health over the base 100 points.

Second, the Moon needs to be visible in the sky. It doesn’t matter what stage it’s in; it just cannot be wholly obscured like in the New Moon phase.

If both of these conditions are met, then there is an 11.11% chance that the Blood Moon will occur during a given night. It’s also reasonably easy to tell when it starts because players are given “The Blood Moon is rising…” notification beforehand.

When the event starts, the enemy spawn rate is dramatically increased compared to the normal amount. At the same time, the maximum amount of foes that may spawn at a single time are also greatly increased, creating a scenario where players are constantly surrounded by hordes of monsters at all times.

The Blood Moon’s influence also morphs otherwise non-violent creatures like Penguins and Rabbits into dangerous monsters, which further creates more threats for the player to deal with.

NPCs living within your house also lose their ability to reduce enemy spawn rates, making your backyard an area where monsters are continually appearing.

And if all of this wasn’t already enough, Zombies also gain the ability to open doors. This is perhaps the most dangerous hazard of all during this event because it effectively makes your own house unsafe for you and your NPC friends.

How To Survive A Blood Moon?

If you’re inadequately equipped or unsure of your ability to hold off a horde of hundreds of enemies, the best thing that we can recommend is that players break down the doors of their homes and replace them with any other building material.

When your house has no doors to speak of, they cannot be opened, and you can safely hide inside of it until the night ends. There’s nothing wrong with recognising that you’re unprepared to deal with a dangerous situation in Terraria, plus it will also save you from losing a bunch of gold and items from all the times you would die.

But if you do decide to take your chances outside, you’ll be adequately rewarded for your efforts.

First, make sure that your house is adequately boarded up, and all the NPCs inside it are safe. It’s not hard to do, simply make sure that you have some basic defences like dirt walls and trap pits in place. The image below should give you an idea of what we mean.

Bring lots of healing items with you when you go hunting, and don’t forget to make frequent trips back to your home to restock and heal up. It always better to be careful than to get overconfident and lose your progress.

And while most of the items you can get from regular enemies during this event are useful, the best of these can only be found by using a Fishing Pole.

Some callous enemies have a random chance of spawning while fishing under a Blood Moon, and these, in turn, drop some perfect loot upon death.

Some of the key monsters to look out for are:

Fishing also has a chance to yield a handy item known as the Advanced Combat Techniques book. It can only be used once per world, but it permanently increases the damage dealt by friendly NPCs by 20% and their defence by 6 points. This item alone makes fighting through the Blood Moon worth it.

Not every new item during the event has to do with combat or fishing, though. Some of the NPCs in the game also sell unique items during the Blood Moon that they do not normally keep stocked in their shops. These are:

This has been our guide on how to survive during a Terraria Blood Moon. 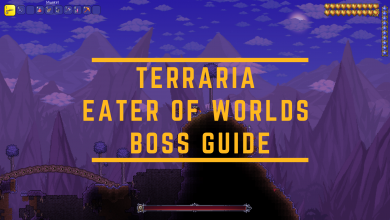