The Modern Bow is perhaps the most powerful weapon in The Forest. Usually, many players compare it to the Crafted Bow, but when you look at the difference, it’s evident that Modern Bow is better in the majority of departments. Suppose, you would want to know, the Modern Bow has Longer Range, Higher Damage, and Faster Arrow Speed as compared to Crafted Bow. Besides, the weapon also has more headshot ratio and less potential for arrow loss chance.

Although the stats part sounds immensely convincing, it does have its consequences. Unlike the Crafted Bow, Modern Bow cannot be made through resources; instead, it’s hidden, and you will have to locate it. This isn’t all that hard because we have a perfect guide for finding “Modern Bow” in the segment below.

The Modern Bow is located inside the Chasm Cave.

Getting inside isn’t easy, and to clarify it further, you need a rebreather alongside a climbing hatchet to begin your experience. Further, weapons are essential since you will run over certain mutants and savages, preventing you from arriving at the Modern Bow.

Once inside the cavern, head down, murder the savages with the Ax, and you will see a wooden square that would have a Christianity sign painted. Separate the blockade, and keep on pushing ahead. Presently you will see an immense pit hole that would have a few water streams and edges to head down beneath. Utilize these edges, and reach the bottom. You will require the climbing Ax at a certain point; however, In case you didn’t bring one. Switch to Godmode, and you will be able to fly without taking any damage.

After you arrive at the base, you will run over one way, so keep heading towards the North. In transit, there will be a few savages, and more Barricades, which would then end with an immense open space, that would have a few stalagmites. I ran away from these through the rebreather because they could be really tough to kill. Likewise, look on the right, and there will be a small blue hole. Swim inside this and head down below.

As the swimming journey ends, you will come across a small island.

This will have a few cargo boxes, looking like that of Cast Away, and close to one of these. You will locate the Modern Bow, which could be snatched through Button E.

How To Use The Modern Bow

The Modern Bow might have more enriching features and slight brutality. This doesn’t ultimately make it different from other Bows in the game. It does have a few specific characteristics which are very easy to identify.

One of the Modern Bow’s key elements is that the more you hold the arrow while shooting, the further it shall go. It also has an easy headshot feature allowing you to land arrows on the head more easily. The range also differs slightly; hence, it’s not recommended to switch between Crafted and Modern Bow because both weapons have a completely different meta. Besides, make notes that the Crosshair of Modern Bow is inaccurate due to the arrow’s midpoint curve. This further results in inaccuracy, but as I said, you need to practice a lot before getting used to the Modern Bow.

Last but not least, the basics are still there. Hit the Combat/Attack-Button, and the Modern Bow will be drawn into your hands. Likewise, you can hold to aim with the right mouse button and subsequently release it to fire the bow. Depending on your key-maps, You can also switch between different arrow types through the R button. The weapon isn’t classified into Throwable or Upgradable and features Max Stack of 1. You can use the normal Arrow, Modern Arrows, Poison Arrows, Bone Arrows, and to unleash Hell, also the Fire Arrows. 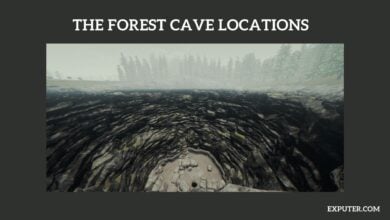 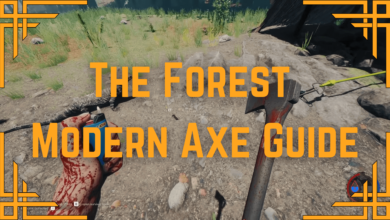 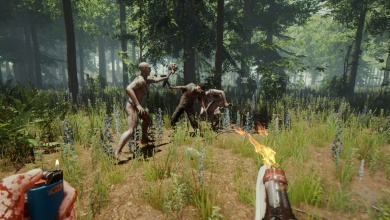 How To Craft Items In The Forest: Complete Crafting Guide