Arkane Studios is the mastermind behind the brilliant Dishonored series, featuring highly enticing gameplay that blends stealth and all-out onslaught in a remarkably gory fashion. Not only the latter, but Prey is another accolade-winning IP coming out of Arkane Studios that shows what this developer is truly capable of.

In recent times, several rumors hinting at the same project have surfaced, Xbox News, for instance, has confirmed the matter at hand by uploading the following on their Twitter page.

The game that is supposedly going to be called “Omen” will have an initial release date of 2022. It has going to feature a dark theme revolving around vampires and such. The first time this news made its way on the internet was through a ResetEra post where a user called “Point” has made some pretty attractive claims.

Word is circulating that Omen is going to be Austin Arkane’s IP, and we know that they’ve been working on something since 2018. You can check out the official Arkane Studios website as they’ve clearly mentioned that they’re working on an unannounced project, and Omen could be possibly it.

The clues seem to further tie in together with a host of job openings over at Arkane Studios. The Senior Gameplay Engineer section particularly mentions that a candidate is required to help develop their next title.

Games coming from Arkane haven’t disappointed. Despite Prey’s poor reception in terms of sales and under-rated status, the majority of the gamers have lauded the thrilling FPS with praise. Therefore, one can only aboard the hype train for Omen, since the category it falls in is nothing short of exciting. Let’s gauge whether the game makes an appearance at E3 or not. Point seems to believe that since the game is a year out from release, a gameplay trailer or anything of the like does make sense this summer.

What do you think of this upcoming IP? Let us know your thoughts down in the comments section. 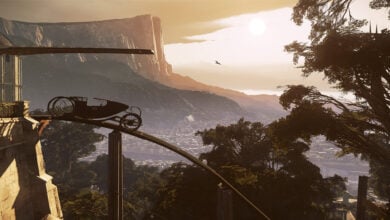 Arkane Will Still Use Void Engine For New Games