It appears that Arkane Studios, the masterminds behind beloved games such as Dishonored and Prey, is currently working on a new AAA project. Based on our information, we can reasonably assume that this new project is going to be another action-focused title in which players will have unique powers to play around with. 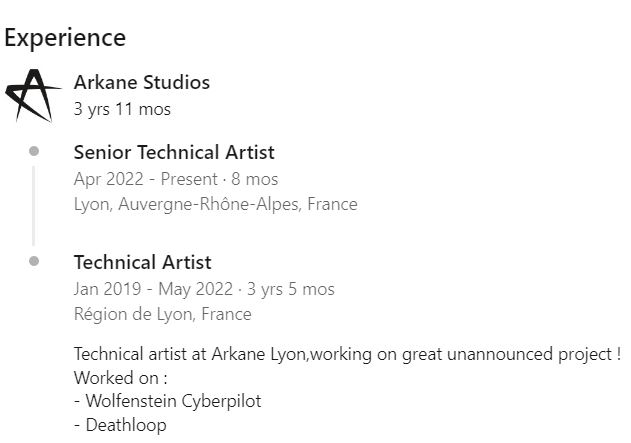 The hint towards a new project was first shown on the profile of one of the Senior Technical Artists at Arkane Studios Lyon. The artist has also previously worked on other Arkane titles such as last year’s Deathloop and Wolfenstein Cyberpilot which was co-developed by Arkane.

We also assume it’s an action game based on a prior job listing by Arkane Studios Lyon for a Gameplay Programmer which states, “Collaborate on the implementation of new gameplay features: player and characters’ behaviors, combat and powers mechanics.”

It should also be clarified that this is specifically for Arkane Studios Lyon, not Arkane Austin who is currently working on Redfall which is due to come out sometime in 2023. Arkane Lyon is responsible for the larger Arkane titles such as hits like Dishonored, Prey, and Deathloop.

It’s also particularly challenging to narrow down whether this is a new IP or a sequel to a previous IP because while Dishonored is the most recognized Arkane game that gives the player special powers to play around with, all of Arkane’s games following it has given the players similar powers including Prey and Deathloop.

Personally, as someone who has enjoyed some of Arkane’s games even before Dishonored, it would be great to see Arkane Studios go back to their old games such as Arx Fatalis or hopefully even Dark Messiah of Might and Magic. The latter of which might be one of the most unintentionally funny action games ever made.

Arkane Studios themselves first established its name as a major developer in the industry with the release of its most recognized game, Dishonored. Dishonored was meant to be a successor to the Thief series by Looking Glass Studios. It is also, among Arkane’s other games, lauded for bringing the immersive genre back into the mainstream.

Arkane Studios’ latest title, Deathloop, also launched to universal acclaim from critics. Many praised its evolution of the idea of a time loop previously established in a DLC for Prey titled Mooncrash.

While fan reaction towards Deathloop has been relatively mixed, it is going to be interesting to see whatever new project Arkane is going to be working on next.