The Call of Duty franchise is currently one of the leading first-person shooter titles worldwide. With Modern Warfare 2, it has gained its height of popularity and it still looks like a growing deal.

Developers are in a fierce battle because of the bright future and high expectations for each Call of Duty campaign, and as of right now, it appears Raven Sofware is set to take over the new drive.

Normally, this wouldn’t be a big round, but Raven Software is one of the most well-known creators from the heyday of first-person shooter games. Beginning with Heretic back in 1994, the studio has a library of legendary games that eventually led to the development of long-running IPs like Starwars: Jedi Knight 2 – Jedi Outcast.

First spotted by Tech4Gamers, a recent job posting on the platform is precisely what made us conclude that Raven Software is tasked with developing the upcoming Call of Duty campaign.

The requirements are fairly specific in their aim for a particular outcome. The job title is Lead Campaign Animator, and the ideal candidate will be well-versed in Call of Duty video games. Although having an understanding of COD is stated as a plus, it provides us with a fairly straightforward response.

We have more evidence to back up the assertions made above. TheGhostofHope, one of our Twitter users and a well-known, trustworthy COD leaker, asserted that Raven would take over the Call of Duty campaign.

As Call of Duty Campaigns are well known for the scripted animations, it is another anticipation for the players. In a reply, the user also claimed Raven to be doing the campaign’s script.

And when asked which developer would craft the storyline, the leaker also replied, “Raven would.” 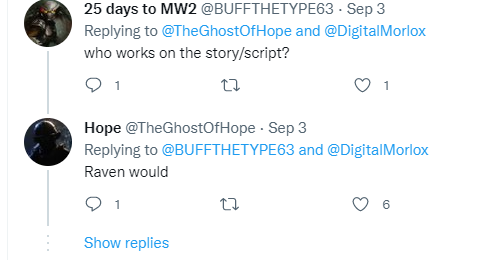 Doing a so-called X-ray analysis of Raven Software’s job listing, we noticed, with reference to the scripted mode of Call of Duty campaigns, this position also requires expertise in gameplay and scripted animation sequences.

For the position, an understanding of first- and third-person animations is necessary. Call of Duty uses animations in both gameplay and cutscenes for their fantastic campaign modes. It also calls for proficiency in gameplay narrative methods, which are essential to any single-player experience.

Associating with the above, the job listing also requires strong knowledge of the gameplay language and storyline techniques plus an understanding of both first-person and third-person gameplay animations.

Because the Call of Duty: Black Ops Cold War campaign earned such recognition, we believe that Activision has a lot of faith in Raven Software even if it was previously only allowed to be a supporting developer. The popularity of the game may have given Raven Software access to a robust campaign.

But because we have no official confirmation as from Activision and Call of Duty devs. we’ll conclude this as an evidence-based rumor and wait for an official answer. We only wish for a powerful FPS title and as for Call of Duty being one of the tops, we hope it exceeds our expectations.