Patents are an easy way of figuring out the future ventures of large cooperations worldwide. They are hidden treasures waiting to be unearthed that can reveal what is to come. On the other hand, the legal documents ensure that their ideas are not manufactured and sold by other companies for a specific time.

Patents play a significant role in the gaming community by hinting toward future projects. Goliaths like Electronic Arts are renowned for publishing essential patents that eventually come to fruition in the gaming community. Earlier today, we found that Nintendo had recently published a new patent, which was filed back in February 2020, for a ring-shaped motion-sensory Nintendo Switch add-on.

The add-on is described as an “apparatus that acquires action data based on an output of a sensor according to a fitness action performed by a player, and executes a game event.” The description calls actions performed by the user a “fitness event.”

The patent’s description is reminiscent of the current Ring-Con and Leg Strap add-on for the Nintendo Switch, which also use motion-sensing technology and the ability to dock the Nintendo Joy-Con controller to provide an immersive gaming experience. Nintendo’s title, “Ring Fit Adventure,” is shipped with a Ring-Con and Leg Strap and used in various other games to some extent.

The patent description elaborates, “During the game event, the information processing apparatus executes a fitness event that causes the player to perform a fitness action corresponding to the designated fitness event until an ending condition is satisfied.”

The add-on can be used in games, from fighting monsters to exercise-based titles. The patent cites, “The game event may be a battle event of fighting a battle against an enemy character. Executing the game event may include executing an attack event of attacking the enemy character in response to the fitness action performed by the player during the first fitness event.” 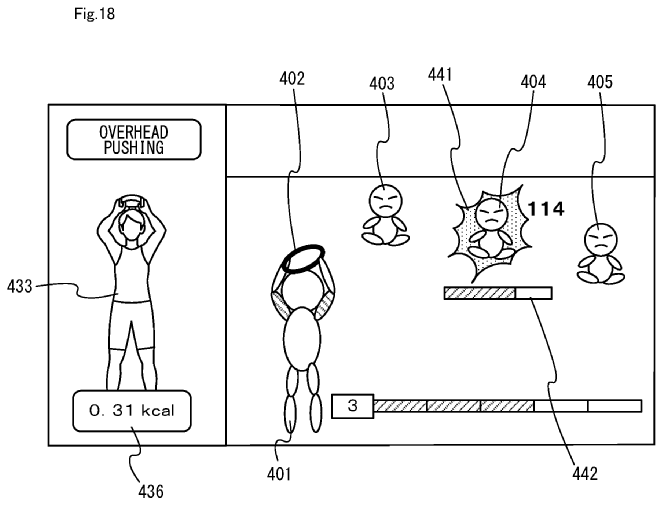 Diagram unveiling an example of an image displayed in an attack event.

The ring-shaped add-on by Nintendo can be used in various fashions, like playing games requiring physical action or bodily movements. The patent features two devices: a ring-shaped add-on and a non-limiting belt that can be worn on the thigh, reminiscent of the current Ring-Con and Leg Strap add-on accessories for the Nintendo Switch.

In the patent filed by Nintendo, exercising and jogging are frequently mentioned, since the device seems perfect for all kinds of fitness-oriented games, like Ring Fit Adventure. Training of arms, legs, and abdominal muscles are also mentioned as instances where the add-on can be used in games.

Oddworld: Soulstorm Found At A Listing For Switch

Mario Strikers: Battle League Sales #1 In France Despite Drop To #3 In UK

Dragon’s Dogma: Dark Arisen On Sale For Lowest Price Ever