The trophy and achievement offered in Far Cry 5 are quite in line with other entries in the franchise. There are a total of 51 trophies on Sony’s platform and 50 achievements on Microsoft’s platform. Here’s a comprehensive guide on how to unlock all of them.

All Trophies and Achievements in Far Cry 5

We Always Had Faith In You (Platinum) – Sony’s PlayStation 4 players can achieve this trophy by opening all of the others in Far Cry 5, easy. Side Note: DLC is not needed to obtain this trophy.

The Spark (Bronze, 20G) – Acquired by performing the Prologue.

You Are Wrath (Silver, 50G) – Obtained automatically while the ‘The Confession’ Story Quest runs.

Special Delivery (Bronze, 10G) – Finish the optional ‘Special Delivery’ Story Quest. The mission is opened after releasing John’s region. After accomplishing so, you’ll get a call from Kim Rye requiring you to go see her.

Only You (Silver, 50G) – Obtained automatically by performing ‘The World is Weak’ Story Quest in Jacob’s district.

Together Forever (Gold, 100G) – This trophy/achievement is granted upon finishing Far Cry 5’s Campaign, despite which ending you choose.

Science Fact (Bronze, 15G) – This trophy/achievement is granted upon fulfillment of the voluntary questline including Larry and the aliens. To begin the first mission, locate Larry at the fast travel point “Parker Laboratories” just west of Fall’s End.

There are four Story Quests to complete:

At the conclusion of the final mission, the achievement/trophy will protrude.

Ain’t No Wallflower (Bronze, 20G) – This one wants you to chat with 50 residents of Hope County. You should acquire all 50 just by playing the game and chatting to everyone you come across, advancing through while to make sure to complete every piece of dialogue before going on. To hurry things up, you can fast travel to a headquarters, chat to everyone, fast travel to a different, and improvise. As long as you’re taking a different piece of dialogue each time, it’ll add.

Been There, Done That (Bronze, 15G) – Perform all of the hunting and fishing objectives. You can check the objectives by going into the menu, selecting challenges and then scroll down to the hunting section.

Liberator (Bronze, 10G) – Release five areas from the Project at Eden’s Gate. This can be accomplished as soon as you perform the Prologue Story Quest.

Scavenger (Bronze, 10G) – In succession to perform this Far Cry 5 trophy/achievement, you must complete three Prepper Stashes missions. These are shown by a green diamond on the map, just go to them, study the notes and follow the objectives.

The Greatest SOB That Ever Lived (Bronze, 15G) – For this one, you’ll need to perform a Clutch Nixon Stunt Mission in every region. There are eight in total and need you to drive/fly within a series of checkpoints using different vehicles.

Pack Rat (Silver, 20G) – Take one of each collectible item, these include:

A Wing And A Prayer (Bronze, 20G) – Automatically obtained by performing the “Wingman” Story Quest in John’s district.

Troublemaker (Silver, 20G) – In Far Cry 5, there are four regions which include cult field which the player can damage. This trophy/achievement demands the player to destroy one piece of property in each region. The types of property are as follows:

The Hurk Locker (Bronze, 10G) – The fundamental step here is to hire Hurk Drubman. He can be found after being marked on the map in Jacob’s region, upon fulfillment of the “The Prodigal Son” Story Mission. Once you’ve hired him, set him as an actual partner and go find some vehicles. By pointing your reticle above a car or any ride and hitting the left directional key, Hurk will initiate fire and destroy it. Complete this 15 times and you’re golden.

Hope County Master Angler (Silver, 30G) – You’ll have to assemble all four of the fishing rods in Far Cry 5. Here’s how:

Locked and Loaded (Bronze, 10G) – Get all accessories for one weapon. We suggest the bow, as it only uses two accessories to upgrade fully.

Ghost Kill (Bronze, 10G) – Execute a Headshot kill with any weapon on any cultist more than 150m away. You can fix a distance label over an enemies head using the binoculars. From there it’s just a matter of locating or getting a sniper rifle and beating your target.

Ace Killer (Bronze, 10G) – Slaughter 10 planes while riding any aerial vehicle. For this trophy/achievement go to any hanger and seize a plane with a machine gun on the rear. Generate other planes in front of you and blast them away. Soak and repeat.

Squash and Run (Bronze, 10G) – Drive over and hit 20 enemies, they can’t be civilians. This is comfortable to achieve by driving into an outpost and driving everyone down. You can iterate this method over and over as they call in support.

Death From Above (Bronze, 15GS) – This one wants you to take out four rides with a bomb dropped from a plane. Go to a hanger and pick up one of the planes with bombs (Carmina, the Clusterduck, The Wild Goose) and rush it to a garage. Then, place four vehicles nearby the plane. Get in the plane and drop a bomb and voila!

Opportunity Knocks (Bronze, 10G) – Puzzle 15 foes using rocks or cans. You have an immense supply of these, which can be projected using the down directional button.

Road Gunner (Bronze, 15G) – While driving or pitching out of a vehicle, shoot 25 enemies. Easily obtained through the ‘Widowmaker’ Side Quest.

Fish Market (Bronze, 10G) – For this trophy/achievement, you’ll want to trade 20 fish for money. You can sell them at any common store.

Where’s the Beef? (Bronze, 15G) – Here, you have to destroy a bull with your bare hands. You’ll want the homeopathic “The Furious” from the utility wheel, which will enable you to kill the bull with a single punch.

Ignoble Beasts (Bronze, 10G) – To obtain this trophy/achievement, you’re going to have to execute a bison with any melee weapon. Again, the simplest option here is to utilize the homeopathic “The Furious” from the utility wheel. This increases your melee damage and will kill the bison in one hit. If you don’t want to steep it, then you can attack the bison by lingering behind it at all times. You can also set the difficulty down to easy to assist you.

Like A Bird (Silver, 10G) – Use a wingsuit to move more than 5000m. First, you’ll have to unlock the wingsuit perk for four points, then go to a cliff or a mountain, jump off and bang R3. This trophy is performed a whole lot easier by the Airdrop perk, which lets you fast travel into a lofty airdrop area.

Close and Personal (Bronze, 20G) – Complete 25 close battle Takedown Kills. Walk up to an opponent and you’ll see an R3 prompt. This will trigger a takedown animation. Do 25 of these to gain the achievement/trophy.

Explosive Surprise (Silver, 20G) – Eliminate 5 enemies with sabotaged vehicles. You’ll require Saboteur Perk for this one. Go to any fast travel location and wait for an enemy vehicle to turn up. Shoot the driver, leaving the passenger alive. Set a bomb on the bonnet of the car then keep the foe as close to the car as possible as it explodes. Do this 5 times and you’re done.

Survivalist (Silver, 20G) – Obtain half of all perks available. There are 50 in total so 25 is all that is required. 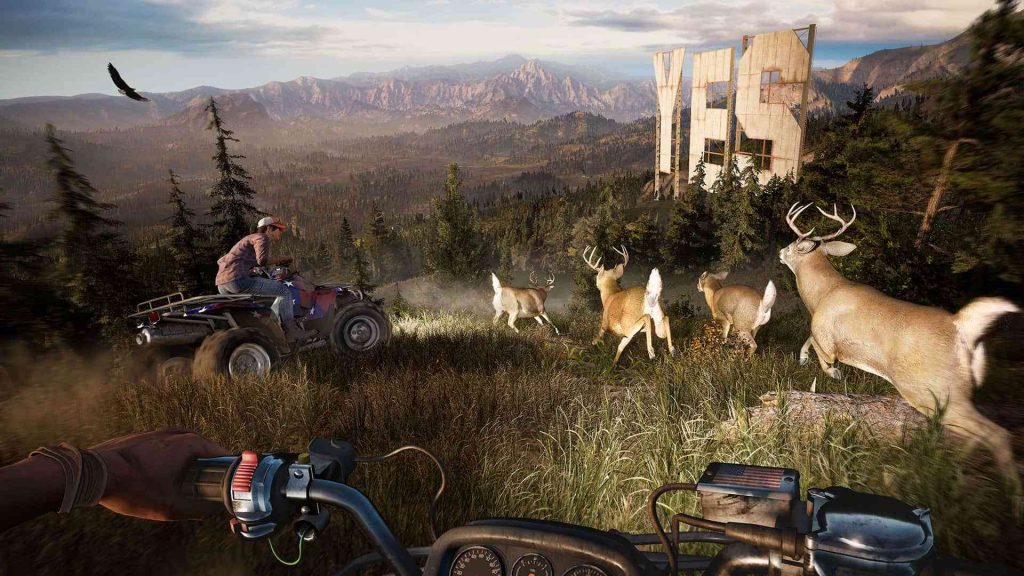 Far Cry is back with a bang in our lives with its latest ground-breaking installment, Far Cry 5, which takes us to the cult-utilized home of Hope Country, Montana. The game turns its locus to America but still depicts all of the wild animals and the same cutting-edge first-person shooter action everyone loves.

And there you have it, how to obtain every achievement/trophy in Far Cry 5.  Good luck!