A game that was released in early 2019, Risk of Rain 2, is essentially a shooter game that is in third person and revolves around the crew of “UES: Safe Travels,” where the crew aims to find out and free survivors that are from the UES: Contact Light. With the all-new patch update, Risk of Rain 2 has recently released a new Survivor by the name of Railgunner, and this Risk of Rain 2 Railgunner Survivor Guide is all you need to know about Railgunner.

How To Unlock Railgunner in Risk of Rain 2

With the newer versions of Risk of Rain 2 being released time by time, it is no secret that there has to be some sort of premium DLCs that players need to give in to get hold of their newest survivors and this new update is no more minor.

With the newest “Survivors of the Void” DLC now available globally for purchase, players can access all kinds of new content. The content includes newer and worthier opponents that players can defeat, slashing their way through the most difficult of stages to gain victory, as well as tons of new game modes and a lot of new items.

Along with the premium DLC new content comes the newest Railgunner that you can purchase for a total of 10 dollars. After purchasing the DLC you will have the Railgunner survivor unlocked from the get-go.

Moving forward, the survivor Railgunner in Risk of Rain 2 comes with some impressive abilities that we will talk about now.

We hope that you are finding this Risk of Rain 2 Railgunner Survivor Guide helpful; there are some tips that you should follow when pursuing Railgunner; here they are as follows:

Read on about: Risk of Rain 2 Captain

Making our way through the Risk of Rain 2 Railgunner survivor Guide, these are some of the best items that will highly benefit Railgunner herself. With her focus significantly on buffing her crit rate and increasing her overall damage output, it is fair to say that items that will boost her damage are more viable.

The Len’s Makers Glasses is an essential item present in Risk of Rain 2 that essentially focuses on buffing your crit rate by 10% to efficiently deal as much damage as possible. The item itself can stack for a total of 10 times, with each attack stacking on top of another; by the time the 10th stack has been made, Railgunner will have a 100% crit rate.

Take into consideration that the item itself will not stack past the limit of 10. As Railgunner highly benefits from crit rate buffs, this item is of most value to her, as her damage against her foes will be increased by a high amount, and it will cause her to wipe off enemies within seconds.

Check out: Risk of Rain 2 Commando

Following along, Railgunner’s next best slot item is the Crowbar, which will benefit Railgunner yet again in her combat. When the player taking hold of the Crowbar launches an attack against an opponent that has more than 90% of its overall HP in its health bar standing, the player will effectively continue to increase their overall damage output by a total of 75%.

There can be more than two stacks of Crowbar at any given time, and if you manage to stack it three times, then you will deal around 225% additional damage based on 3 stacks; therefore, it is recommended that the player uses this to their advantage and deal massive amounts of damage against their opponents.

Going right on with the Backup Magazine, this item is yet another amazing one for Railgunner, as it offers up the benefit of allowing the player to use their Secondary skill another time instantly without needing to cool down the trigger, without which it would have been troublesome. For Railgunner, she can benefit from resuing her Secondary skills a lot.

If you have more than a few Backup Magazines in your arsenal, it allows for a consistent damage output as you can trigger the skill again and again. The player can spam the skill with ease, and Railgunner can use her M99 Sniper and HH44 Marksman skill excellently with this item.

The next item is the Runald’s Band which offers Railgunner with an Ice based explosion when Railgunner attacks enemies with 400% additional damage based on her damage output. The opponent will also be massively be slowed down for a total of 3 seconds, which gives the player ample time to attack and take them down.

With that, we hope that you enjoyed this Risk of Rain 2 Railgunner Survivor Guide. Make sure to give us feedback on how you like the guide in the comments down below! 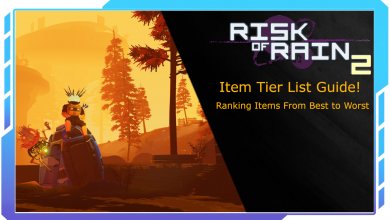