Now that Pokimane is taking a break, the slot for a female streamer on Twitch’s Top 100 was out for another candidate. That it grabbed one so soon is no rocket science, as the popularity of this streaming platform is ever-shifting.

Twitch’s landscape has always been dominated by male streamers, with their female counterpart being a marginal competitors. At least in terms of rote statistics – which one is qualitatively better is up for debate. The glaring difference in numbers aside, when a female streamer makes to some top list, that’s a highlight.

StreamElements’ latest State of the Stream report brought forth Amouranth as the only female streamer saving a spot in Twitch’s Top 100 streamers.  She reached 6 million followers early this month. It should not be a surprise why things have turned the way they did.

The popular female streamer Pokimane had decided to take a rest, and Amouranth had returned to the platform, her last update before the return being that her husband was verbally abusing her.

This already created a potential rift for the followers to fill in, as who wouldn’t be concerned to know more about this down-to-earth streamer’s life now that she has gotten back?

Amouranth has always been popular with her feisty personality, creating streams that always brought something new to the table.

With time, she started adding content about her personal struggles as well, inspiring support and concern from her dedicated followers. That now she’s the only female streamer within the top 100 Twitch streamers is a testament to that support and concern. 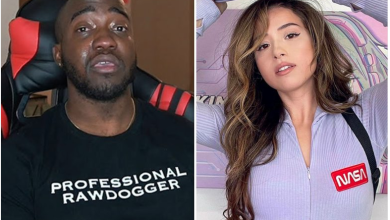