On Monday, a Horizon Forbidden West build has leaked online just weeks ahead of its release date. Its been since confirmed that a build has leaked online and is taken hostage by the hands of the public domain. The build has been verified to belong to the PS4 version. It’s almost complete but missing some essential art assets. Besides that, the core story and content remain in the build.

A few images started circulating on Twitter claiming to be gameplay from Horizon Forbidden West. What confirms the legitimacy of this is that those images were ultimately removed after a few hours of being public due to “a report from the copyright holder.” In all likelihood, by publisher Sony Interactive Entertainment and developer Guerrilla Games.

Traversing the web has suddenly become dangerous for gamers; spoilers could be lurking around the web. This feels like The Last Of Us 2 situation again where the ending was leaked online and had spoiled the story for everyone and core elements. Thus it killed quite a bit of hype that surrounded the game at the time. Consequently, it would not be out of the ordinary to see someone use the leaked build for malicious intent.

Fortunately, there seemed to be no leaks being distributed through file-sharing websites at the time of publishing. However, Sony Interactive Entertainment needs to be active in taking all the necessary action to stop the spread of this build. And we need to beware of the spoilers.

Though not all is dark and gloomy about the leak, it has sparked a lot of excitement in the heart of gamers. It confirms the apparent improvements from the last installment. Players have been enthusiastically waiting for the release due on February 18, 2022, for PS4 and PS5. There is no speculation for the PC version. Yet following the previous game, the PC version may follow suit in the future. The players on last-gen will be able to upgrade to the next-gen for free. Though only if they purchase a special edition.

Horizon Forbidden West is bringing quite a lot to the table. The sequel continuing half a year after the events of Zero Dawn will see Aloy and her comrades head further down to the Pacific coast to explore a plague that kills all. There are still more mysteries to solve about the origins of what destroyed her world.

Another thing that has been confirmed is just how gorgeous and well-crafted this game looks on PS4. Players were a little uncertain about whether the hardware of last-gen was going to handle the developers vision or not. In an interview announced in June, Horizon Forbidden West director Mathijs de Jonge claimed the game on PS4 hasn’t been held back from realizing its vision.

Besides 3D audio, quick loading, and DualSense support, the main difference between the game’s two versions is the graphical aspect, he claimed. The game on next-gen looks breathtaking. Players who stumbled upon the leak are reporting that they are left in awe. They said that they could notice every hair strand and minor detail from far away. Such precise information gives it a taste of realism that only a few games can achieve.

The future of this series looks quite bright, and only a few weeks are left before it releases. Horizon Forbidden West promises to bring a lot of improvements over its last installment, like better crowd density and a different approach to the story so more time can be spent with essential characters.

Although the images are removed, a couple of off-screen pictures exist. Translation of the tweet is as follows, “First In-game images of the next game ‘Horizon Forbidden West‘ this time the version of the images are from ‘PS4’.”

We would love to know your thoughts about the online leaked Horizon Forbidden West build. Let us know in the comments if you are excited for the game or not. 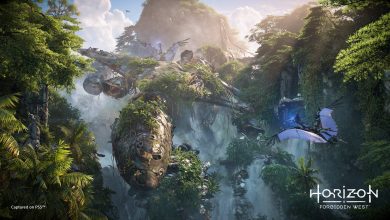