Regularly upgrading technology is a big part of any big industry. No matter what it is, you need to improve your tools to progress and keep the audience on board. The emphasis on technology is even more in an industry like gaming and we see new inventions every year.

Probably the most important new piece of tech in the gaming world is the Unreal Engine 5. Epic Games revealed this engine just this year on April 5, 2022, and it has been remarkable. Saying that the new engine has revolutionized the gaming landscape won’t be untrue.

One of the biggest benefits of Unreal Engine 5 is the freedom it provides to developers. Every developer can make video games from their wildest imaginations and many games are shifting to the engine. Recently, a story from a former Bethesda developer turned indie backs up this aspect of the Unreal Engine 5.

In a Twitter thread, a former Bethesda developer, Nate Purkeypile, told us the reason he left the company to make indie games. Even though his experience with Bethesda was great, his dream was to make his own indie game. And, the new technology which made him believe that he could realize this dream was Unreal Engine 5.

Nate worked on many big-name titles for Bethesda, like Skyrim, Starfield, and Metroid Prime 2 for Nintendo. But, most of his work was for the Fallout series and he made a significant contribution to those games. Fallout 3 and Fallout 4 both won GOTY awards and so did Skyrim, making Purkeypile’s resume pretty great.

Even though he spent a decade working with Bethesda on Fallout and was on good terms, his dream was to make a game based on his own vision. According to Purkeypile, this was impossible with the tools of the past. But, since the improvement in tech over the years and the introduction of Unreal Engine 5, it became a possibility.

Advancements in tech like the Houdini, VR Sculpting, and Megascans, alongside the Unreal Engine 5, have made solo indie development much easier. They have made the art of making games much more flexible and allows them to create anything. Purkeypile saw this window of opportunity and left Bethesda to work on his own game.

The game is called “The Axis Unseen” and is a solo project from the indie developer, based on Unreal Engine 5. It has an inciting premise in which you have to hunt monsters from folklore over a metal soundtrack. So, this is definitely one game PC players should play and you can wishlist it on Steam right now. So, a story like this really tells us how important Unreal Engine 5 actually is for indie developers. 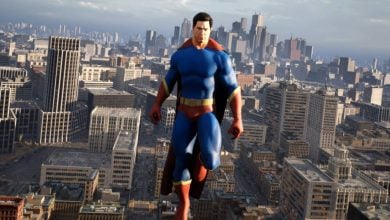