Every Overwatch 2 fan is crazy about the sprays, skins emote and poses the game has to offer. However, this time around, there are no loot boxes that will help you get these items in the game. So in order to acquire skins, emotes, and various sprays, you need to get Coins in Overwatch 2. Our guide today will be about the Overwatch Coins and how you can get them in the game for free through weekly challenges or by buying them in the in-game store.

The veteran players of Overwatch will know that it previously featured loot boxes that helped you obtain items like poses, emotes, skins, and sprays. However, in Overwatch 2, you will be using a new in-game currency.

The premium currency is called Coins, and they can be obtained using several ways in the game.

Also, keep in mind that there are no loot boxes in Overwatch 2. So the only way of getting your hands on the amazing mythical skins is to get as many Overwatch Coins as you can. Furthermore, another great thing about the Coins is that you will also be able to purchase the battle pass for free using the Coins.

Also, make sure to check out our guide on Doomfist, where we have listed all his abilities and the best suitable playstyle for him.

However, the method requires a lot of grinding. In order to avoid all that effort, you will have to spend real money on the game. In our guide below, you will find both of the methods where you will be able to obtain the Coins for free as well as by spending money in the game.

Getting The Overwatch Coins For Free

You can collect the Overwatch Coins to get different skins and emotes for free by completing the weekly challenges. The process might be grinding, but after collecting a certain amount of Coins, you will be able to obtain the battle pass as well.

While you are at it, don’t forget to check out our support tier list, and the top picks for season one. These challenges come every week, and you can complete them to find some Coins.

Every week you will have to complete 11 challenges, and after completing them all, you will get a total of 60 Coins in Overwatch. Therefore if you complete all the weekly challenges, you will be able to earn 240 Coins in a month. 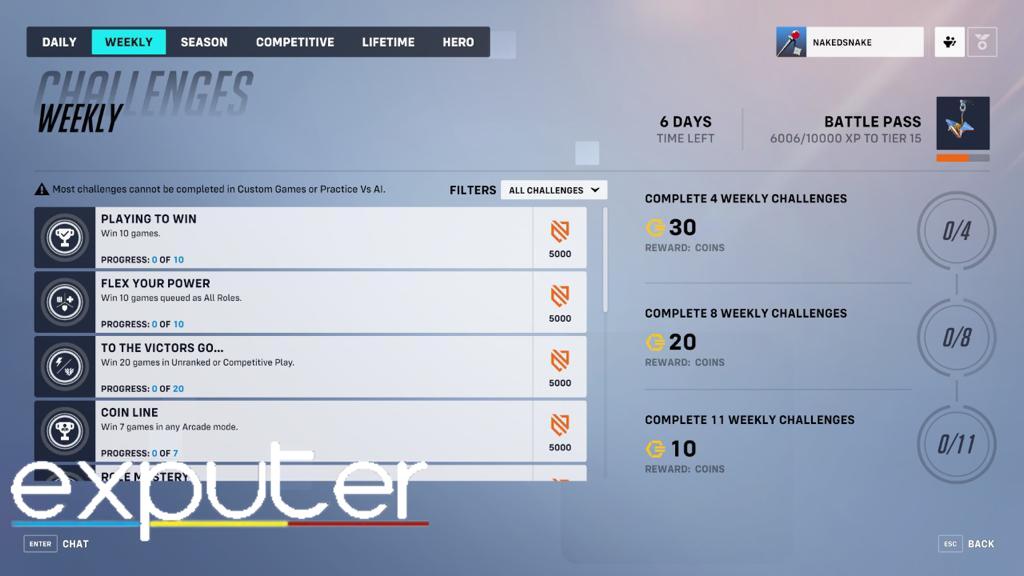 Weekly Challenges [Image Captured By Exputer]Another great thing about it is that you will also be able to obtain some experience points in the game. These XP points will help you level up the tiers In your battle pass when you obtain one. If you are looking for It the best DPS heroes make sure to check out our guide on it.

Keep in mind that you will need to grind a lot and spend a lot of your time completing the weekly challenges. Furthermore, some weekly challenges are quite hard, and you might not be able to complete all of them in time.

You will be presented with missions like winning 10 games, each with two different roles in different game modes like competitive or quickplay. Also, some of the missions will require you to win 20 games in competitive play or in unranked matches.

Therefore, you will have to put in a lot of effort if you want to get all the Coins.

Also, the battle pass will cost you around 1000 Coins. So you will have to complete all the weekly challenges for four months if you want to get the battle pass for free.

The best option to get the skins and emotes fast, as well as the battle pass, is to buy the Overwatch Coins using real currency. Doing so will help you save time and get all the latest skins and even the battle pass. You can buy the Coins by visiting the in-game store and choosing the deal you want.

We have also created a definitive guide on Reinhardt, where we will discuss his abilities and playstyle.

In order to buy the Coins, you need to open the Shop Tab. After that, click on the Plus Icon that will be located near the logo of Overwatch Coins. It will be located in the top right corner of your screen.

The prices of Coins go from $5 to $100 in the game. Also, keep in mind that you cannot get the Coins any other way.

Many fans are not happy with the new system as they think the loot boxes were more convenient to obtain in order to unlock the end of the new skin in modes in the game. For the Coins, the players will have to do a lot of grinding in the game, and that takes the fun away from it.

If you want to transfer the credits that you earned in Overwatch to Overwatch 2, you can do so in the form of legacy credits.

The credits you had It Overwatch will be transferred automatically to Overwatch 2. However, it will be a one-to-one conversation rate, and you can check the legacy credits you own by clicking on the Overwatch Coins tab.

Make sure to check out our guide on all maps and the best tips for playing on each map. Furthermore, you will also be able to see other currencies, like the tokens and competitive points here.

Earning And Spending The Legacy Credits

Furthermore, you can only use them to get the legacy cosmetics in the game, so you will have to purchase the character skins of the older characters and get the cosmetic items from the 32 heroes that were originally in the game.

So you cannot use the credits to get new skins and mods or sprays or any other cosmetic item in Overwatch 2. However, some launch items, like the weapon charms, can be acquired by using the legacy credits in the game.

With this, we conclude our guide on Coins and how to get them in the game. Overwatch Coins play a huge role as they will help you get various cosmetic items like sprays, emotes, and skins, as well as the battle pass.

You can obtain them by spending real money, or you can just farm them in the game by completing weekly challenges. Hopefully, our guide helped you with the new currency system in Overwatch 2. Now, you will be able to get all the skins you want by collecting the Coins in the game.