Sniper Elite 5 is the fifth entry in the third-person tactical stealth game made by Rebellion Developments. Taking inspiration from the huge maps of Hitman, developers Rebellion development have really amped up the game gameplay here.

The inclusion of some of the best snipers mixed with all the new tools you have now at your disposal gives the series a new breath of fresh air. Today in our guide we will be discussing the locations of workbenches hidden in the Spy Academy mission of Sniper Elite 5.

What Are Workbenches in Sniper Elite 5

Workbenches are incredibly useful secrets that you can find throughout every map of Sniper Elite 5. Not only do they let you attach additional attachments to your weapons, but also expand your repertoire.

Attaching a silencer to your pistol or better scope on your sniper can make a huge difference in your missions and for that locating workbenches is a necessity.

Locating Workbenches isn’t as simple as marking their location on the map and simply traveling. Before you reach a workbench, there are a lot of obstructions and barriers you have to go through.

Depending on the map or mission, workbenches are can be found in different resistance safehouses marked with a white flag or Nazi logo.

Workbenches can be troublesome to find, but we are here to save you from that hassle. We will guide you on how to find all the workbenches in the Spy Academy mission of Sniper Elite 5, which will further allow you to upgrade and enhance your SMGs, Pistols, and Rifles.

Before reading further, why not go through our guide on the Sniper Elite 5’s Rat bomb and learn about its uses.

You will arrive at Beaumont Marshland’s once you start Mission 3 Spy academy in Sniper Elite 5. After arriving at the Beaumont Marshland, head to the start of the bridge and sneak around the soldiers or take them out who can be found standing near the truck.

After you are done taking out the soldiers, head into the fort and keep moving along the right flank of the bridge until you reach an entrance with motorcycles in front of it.

Sneak around the soldiers and make your way along the main avenue until you see a red car. To the left of the red car, you’ll see walls covered with white paint.

Climb the wall and head into the doorway and follow the tunnel until you spot an open door. Head inside the open door and look for the Resistance flag and just beneath it, you’ll find the SMG Workbench of Spy Academy in Sniper Elite 5.

Finding the SMG workbench in Spy Academy also unlocks an SMG Suppressor Pack. In addition to that, pick up all the supplies you can, especially the Satchel Charge on the right of the Workbench.

The workbench we’ll be locating next is the Pistol workbench. The pistol workshop looks relatively close, but it is actually situated in the upper part of the town.

Getting to the Pistol Workbench is not only very tricky but there are some requirements for gaining access to this workbench.

Pistol Workbench can be found on the uppermost level of the island, northwest of the SMG Workbench.

After reaching there, you will find a Steel door or the Nazi armory that cannot be opened by normal means. There are two ways to open this giant metal door, and we will be discussing both of them.

The first method is by using Armory Key. To get the Armory Key, you’ll have to take down Officer Josef Lowenstam. You can him strolling around near the east entrance to the main compound in the room next to the large set of stairs.

The second method is very simple and straightforward. Plant the Satchel Charge on the Blue Steel Door and blow it up.

After opening the door through any of the aforementioned means, just head inside the Nazi Armory, and you’ll find the Pistol workbench beneath the Nazi flag.

Finding the Pistol Workbench in Spy Academy will not only unlock pistol upgrades but will also unlock the Pistol Contraband Crate attachment bundle in Sniper Elite 5.

The Rifle Workbench is the easiest to miss unless you are exploring every nook and cranny of Spy Academy. For this Workbench, we’ll recommend leaving it as it is until you complete the mission, or if you want to get to the Rifle Workbench from the Pistol workshop we will guide you through that too.

This workbench location can be tricky to find in Sniper Elite 5. It is located in the Far-North of the island. You can identify the site easily by eavesdropping on the Nazi Soldiers training for “Operation Kraken”.

From the location where you found the Pistol Workbench, head to the west and get inside the cathedral via the west gate. Move towards the statue in the cathedral and turn left.

After turning left, cross the miniature bridge until you see some cardboard struts.

From there, turn left again and take the stairs down to reach the lowest level and head outside into the courtyard and follow the path across the bridge, and turn right. After reaching the area between the two pillars, look to your right, and you will see a giant wall with vines on it. Climb the vines, and you’ll reach the Rifle Workbench.

Walkthrough From the Escape Boat

If you are someone who has already completed the mission and is on his way to the exit but wants to get rifle upgrades before leaving, worry not, we have got you covered as well.

Obviously, backtracking all the way to the Pistol Workshop and getting to the Rifle Workbench from there is quite a hassle. Luckily you don’t have to do that because you’ll find the vine wall on your way to the extraction point.

Before you make your way out of the cathedral and head towards the escape boat, look back at the fortress walls. Head towards the East from there and you’ll reach the wall with vines.

Climb the wall with vines and continue your way up to the hidden Rifle Workbench.

This wraps up our guide on all the workbenches located in Spy Academy’s mission of Sniper Elite 5. Let us know what other discoveries you made in the mission in the comments below. 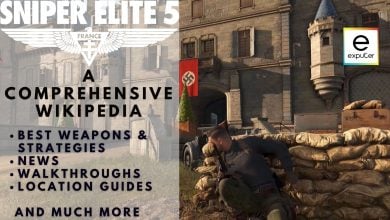