Lockjaw is the loyal pet of the Royal Family of the Inhumans and is one of the strongest cards in Marvel Snap. With 2-power and a cost of 3, he’s not much of a threat on his own. His ability allows him to swap out any card you play at that location with another card from your deck. This seemingly weak ability can be used to great effect, allowing you to swap out weak cards for stronger ones without having spent much energy. When used properly, it can help you on your journey to Infinite Rank in Marvel Snap. Lockjaw can be unlocked in Pool 3 with a Collection Level of 486 and above.

This deck utilizes Lockjaw in the best way possible and will most definitely help you in your rise to Infinite Rank in Marvel Snap.

With an average cost of 3.7 and an average power of 5.8, this deck is an absolute powerhouse. It has some extremely strong cards that, when used correctly, can dish out a lot of damage. The deck utilizes Lockjaw’s ability to swap any card you play, allowing you to play your more expensive cards with ease.

Here’s a list of all the cards in the deck and their abilities:

Most abilities have different trigger conditions. Some cards in the deck have On Reveal abilities activated when the card is played. In some locations, the cards aren’t revealed when played but are then revealed on a later turn. Other cards have Ongoing abilities which are endless and will continue to be applied until the card is destroyed.

In some cases, cards have conditions or requirements for them to be played. For example, The Infinaut can only be played if no card was played on the last turn. Otherwise, it can’t be played.

Here is the role of each card in the deck and how we plan to play each card. 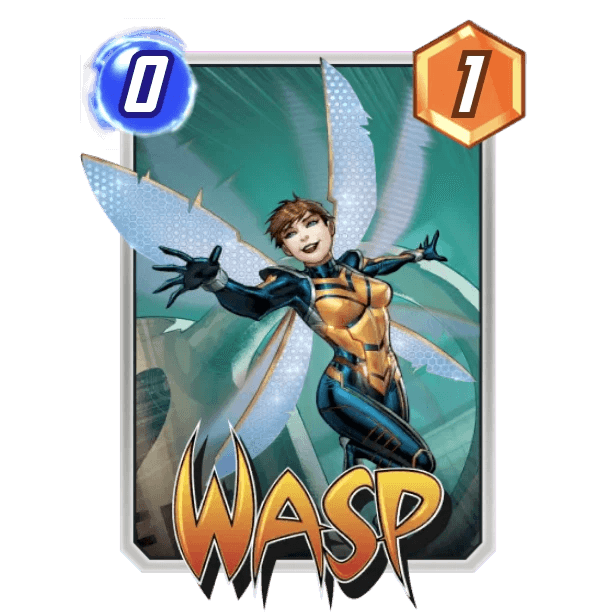 Wasp is a zero-cost, 1-power card with no abilities. Since she’s a zero-cost card, we can play her whenever we want. Therefore, making her a very viable card, and we’ll use her to swap in stronger cards using Lockjaw’s ability. We can unlock Wasp in Pool 3 after progressing to Collection Level 486 and above. 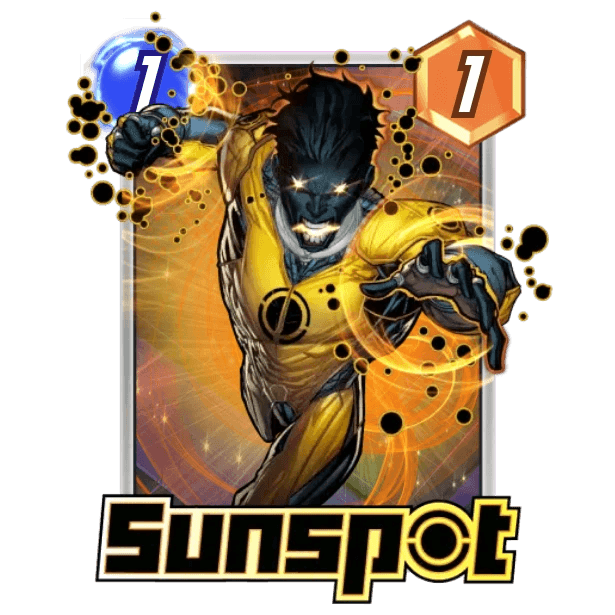 Sunspot is a one-cost and one-power card that boasts the extremely useful ability to gain +1 power for each unspent energy. Since this deck will normally have a bit of energy left over, he’s always a good card to play. We’ll try and play him on the first turn so we can capitalize on every bit of unspent energy afterward. We can unlock Sunspot in Pool 2 at Collection Level 222 to 474. 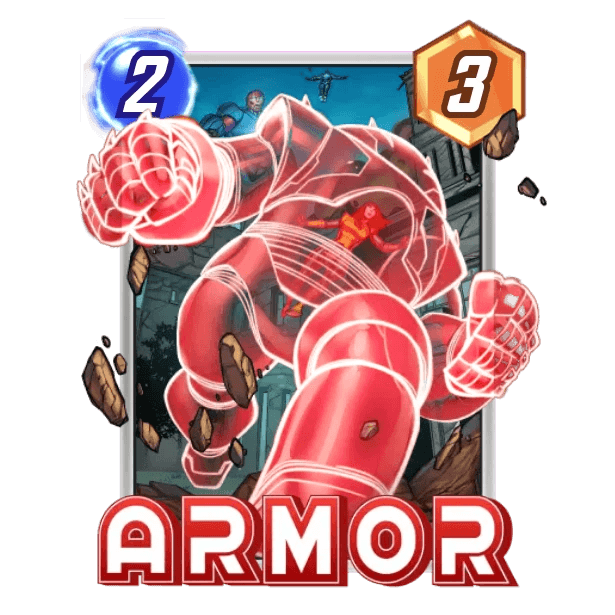 Armor is an extremely strong 2-cost and 2-power card. His ability allows him to protect all other cards at that location. This allows us to set up with some cards without opening ourselves up to an attack from our opponent. Therefore, Armor is an extremely useful card to play. We’ll play him on the second turn to protect Sunspot and secure the location. You can unlock Armor at Collection Levels 18 to 214 in Pool 1. 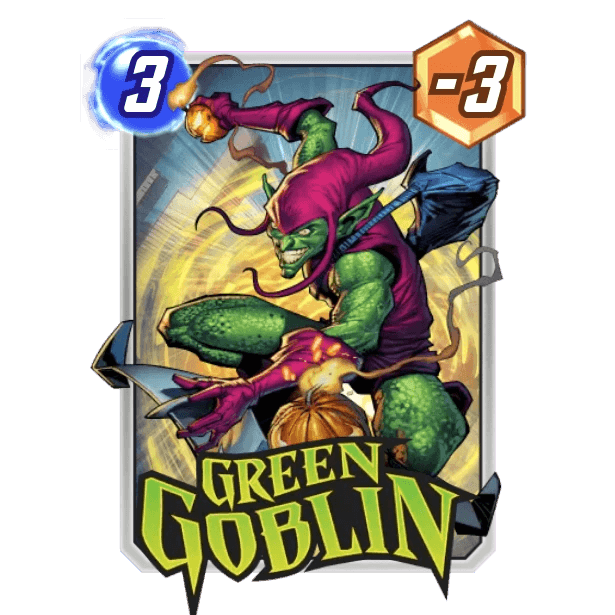 The Green Goblin is a 3-cost, -3-power card. It’s used to give your opponent a disadvantage as its ability is that your adversary will gain control over the card. In doing so, we give your opponent a negative 3-power card that gives him a severe disadvantage. Green Goblin will be our go-to card on the third turn and we can unlock him in Pool 3 by getting to Collection Level 486 and above. 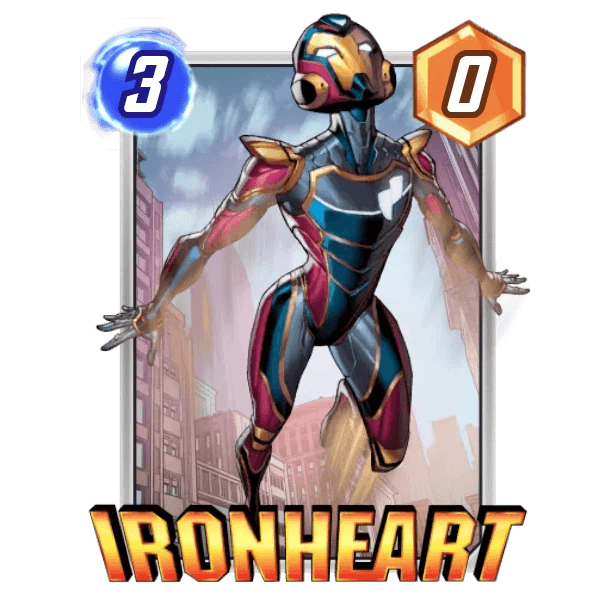 Ironheart is a solid supporting card. With 0-power and 3-cost, she boasts the ability to buff 3 other cards. On Reveal, she increases the power of three allies by +2. This seemingly weak ability helps out when all you need is a little push to get a lead from your opponent.

Paired with Lockjaw, we’ll be able to swap her out after using her ability, so we won’t have to deal with the drawbacks of having a zero-power card on the board. She can be unlocked in the Recruit Season, so you’ll have her in no time. 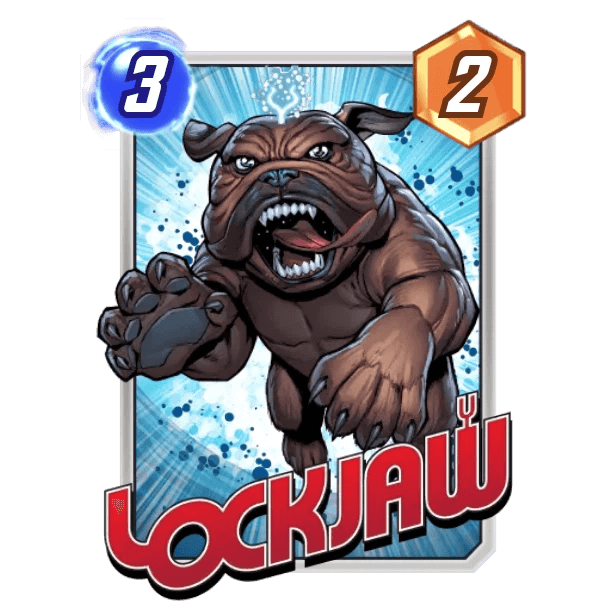 Lockjaw is definitely the best card in our deck. With 3-cost and 2-power, he is seemingly weak. However, his ability more than just makes up for it. He has the ability to swap out any card played in his location. Meaning every card played at the same location as Lockjaw will first activate its own ability and then will be swapped out for another card in our Deck.

This allows us to use weaker zero-cost cards to bring out the heavy hitters from our deck. Lockjaw can be unlocked at Collection Level 486+ in Pool 3. 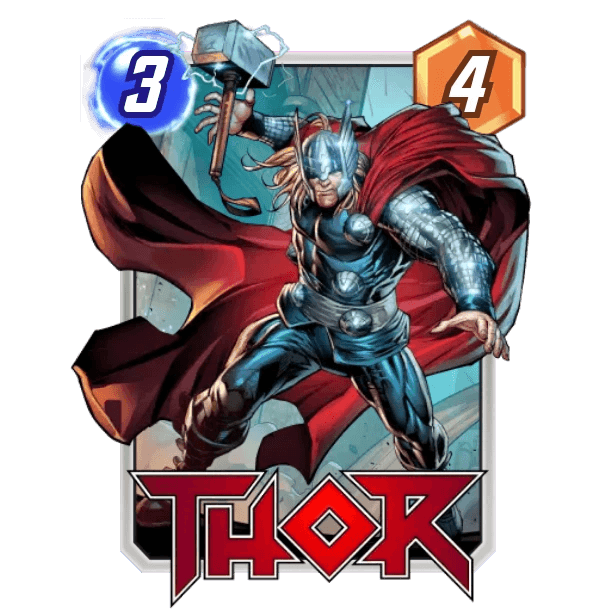 Thor is one of the heavy hitters in our deck. Starting with 4-power and 3-cost, he’s quite an underwhelming card. However, his ability shuffles Mjolnir into our deck. Mjolnir, when played, increases Thor’s power by +6. This turns Thor into an absolute powerhouse.

Normally, using Mjolnir would result in us having a zero-power card on the table; however, we can counter this by playing Mjolnir at the same location as Lockjaw. Thor can be unlocked at Collection Level 486 and above in Pool 3. 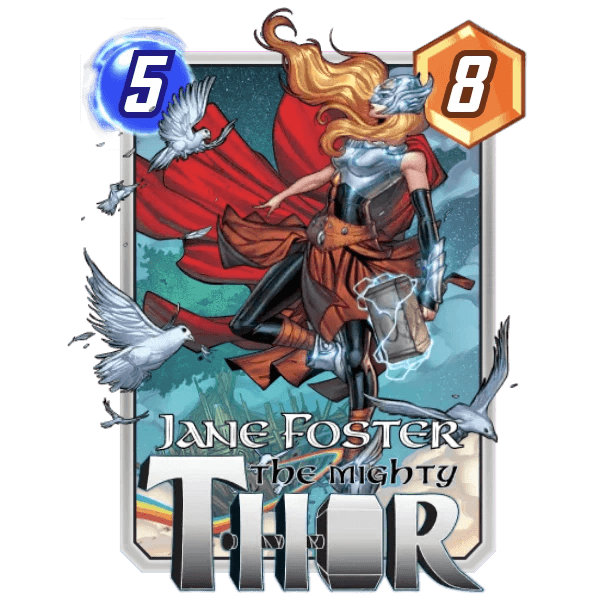 Jane Foster is a key component of our deck. She already has 8-power and a cost of 5, which makes her a hell of an adversary, but her ability is what drives her importance home. She can draw out all zero-power cards from our deck and into our hands.

This allows us to call out Wasp and Mjolnir, making it possible for us to play zero-cost cards into the Lockjaw lane repeatedly. She can be unlocked at Collection Level 486 and above in Pool 3 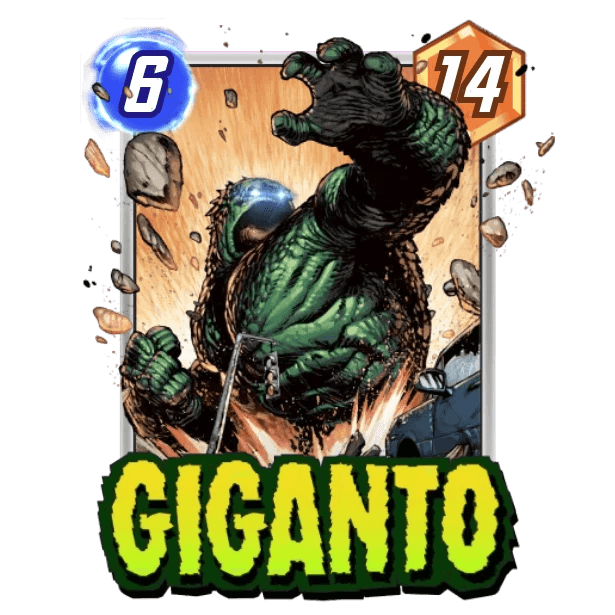 Giganto is one of our 6-cost cards. With 14-power, he packs a significant punch. However, he comes with a drawback. He can only be played on the left lane, which in turn, reduces his viability. Thankfully, we have a solution to this. We can play a low-cost card in the same lane as Lockjaw and have it switch out into a stronger card like Giganto.

This allows us to play Giganto at any lane while also consuming less energy. He can be unlocked in Pool 3 at Collection Level 486 and above. 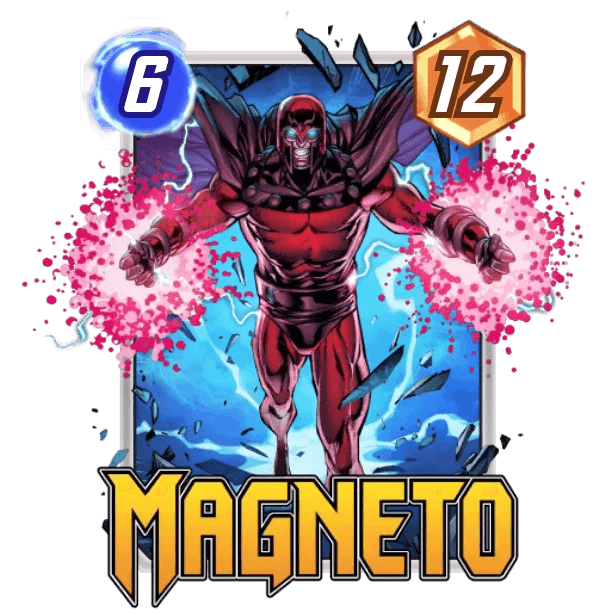 Magneto is a 6-cost, 12-power card boasting the ability to move all 3 and 4-cost cards to this location. His ability, when played right, allows us to move all supporting enemy cards from their positions and into our lane. This can break any synergy set up by the opponent and give them a severe disadvantage.

Magneto can be unlocked at Collection Level 486 and above in Pool 3. If you don’t have Magneto, Doctor Doom is an alternate option for you to add to the deck. 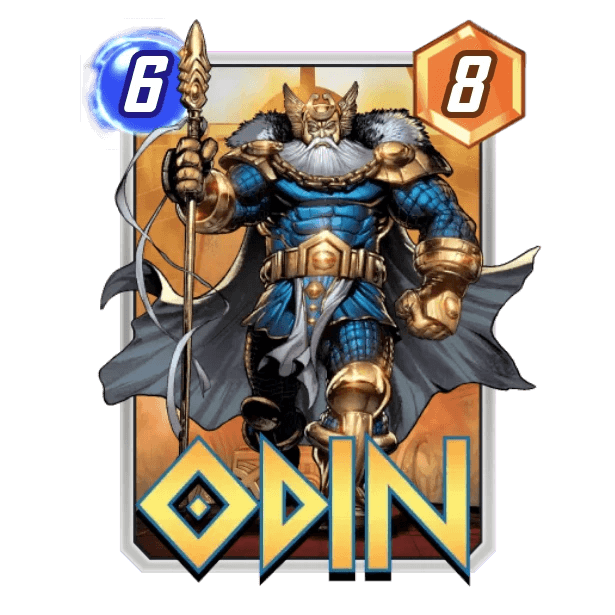 Odin is one of the trump cards in our deck. With 6-cost, we can only play him on the sixth turn. This in itself isn’t very helpful; however, if we’re able to swap another card out for Odin using Lockjaw’s ability, we can activate Jane Foster’s ability twice which would let us draw Mjolnir and Wasp again.

Therefore, allowing us to re-use our Lockjaw strategy. With Mjolnir back in play, we can buff up Thor once again, turning him into a 16-power beast. Odin can be unlocked at Collection Levels 1 to 14 in Pool 1. 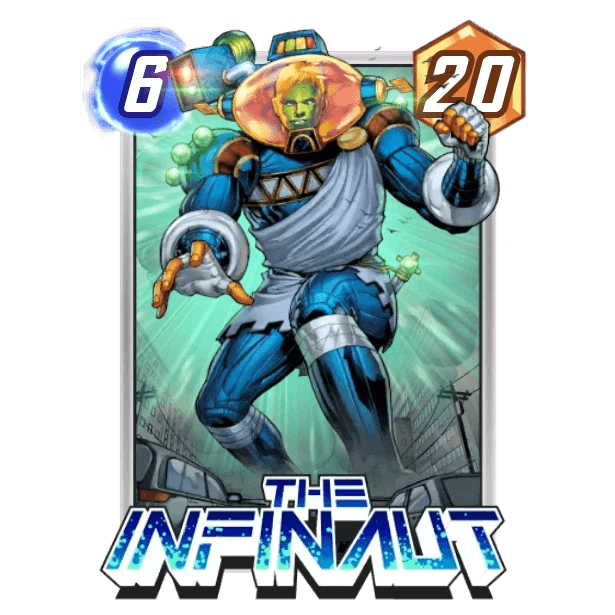 The Infinaut is the strongest card in our deck. With 6-cost and 20-power, he packs an enormous punch. However, he can only be played if no card was played in the last turn. This is a massive drawback and means that we have to waste a turn to get him into play.

However, we have a solution to this. By once again utilizing Lockjaw’s ability, we can swap out weaker cards for stronger ones, like The Infinaut, without having to worry about not playing a card in the previous round. The Infinaut can be unlocked by progressing to Collection Level 486 and above in Pool 3.

To fully utilize our Lockjaw Deck in Marvel Snap, we have to play a certain strategy.

On the first turn, we’ll play whatever cards we have. If we draw Wasp, we should save her until later so that we can play her after we’ve played Lockjaw. Our go-to card will be Sunspot as we’ll have some energy left over each turn and it’s best to capitalize on that early on. On the second turn, we’ll play Armor at the same location as Sunspot, in turn, protecting him and all our cards in that location.

On the third turn, we’ll start to develop our strategy and shape how the game will turn out. We should play Lockjaw and then Wasp on the same lane. This will allow us to swap in Wasp for another, stronger card in our deck. Alternatively, you can also play Green Goblin to give your opponent a disadvantage but this will also limit you from setting up Thor in the next turn.

On the fourth turn, we should play Thor. This will summon in a zero-cost Mjolnir into the deck that we’ll draw out on the next turn. On the other hand, if you don’t have Thor, you most likely will have cards that can be swapped out using Lockjaw.

Play cards like Ironheart and Green Goblin into the Lockjaw lane to trigger his ability. However, to make full use of Ironheart, be sure to have 3 or more other cards in play so that she can buff them all up. In case you haven’t already played Lockjaw, now would be a good time to do so.

On the fifth turn, we’ll first play all our zero-cost cards in the same lane as Lockjaw so that we can swap them out and bring them back by playing Jane Foster. Jane’s ability will draw out the cards we just used and allow us to use Lockjaw’s ability once again. On the sixth turn, we’ll use the newly drawn zero-cost cards again and we’ll play cards like Magneto or Giganto to increase our power drastically. Use Odin on the same lane as Ironheart or Mjolnir to get their abilities to activate once again and give us a massive boost in the end game.

Since drawing cards is based on chance, it’s very likely that you won’t draw the cards that you need. In that case, it’s best to have a backup strategy.

We should try to get Sunspot down as soon as possible; however, if that’s not possible, we can skip turn 1 and focus on setting up on the second turn. On turn 4, if we’re unable to play Thor and haven’t drawn Lockjaw, we can set up Sunspot and the Green Goblin.

Then on the fifth turn, we can skip entirely, which would give Sunspot a +5 power increase and will allow us to play The Infinaut on the sixth turn. With a 20-power card in play, we can easily overpower our opponent and secure the location.

In order to maximize the devastation caused by Lockjaw, always play him on an empty lane. This allows you to play more cards in that lane to have them swapped out. Ideally, we would like to swap cheaper cards for stronger ones. Therefore, it’s best to play or discard all expensive cards in your hand so that they can be swapped in.

Heavy hitters like Hulk, Red Skull, and America Chavez can be used to fill out the deck too. For the cheaper cards, we can use counter-specific cards like Yondu, Black Widow, and Killmonger to great effect. This just goes to show how versatile the synergy between our main three cards is.

Even on its own, Lockjaw is a very powerful card, but after pairing it up with Jane Foster and Thor, it becomes absolutely unstoppable. Use this deck to its full potential, and you’ll be getting to Infinite rank in no time.