One of the more powerful cards in the Marvel Snap is Thor, and you can unlock and use Thor by purchasing the season pass and progressing to level 50.

Thor is a seemingly weak character card in Marvel Snap. With only 4 power and a cost of 3, he doesn’t seem to live up to his title of the God of Thunder. Thankfully, Thor has an ace up his sleeve in the form of his ability. On reveal, he can shuffle a Mjolnir into the deck—Mjolnir, when played, gives Thor +6 power and can turn him into an absolute powerhouse of a card. He synergizes well with Jane Foster, so we’ll also use her in our deck.

Here is the best Thor deck you can make in Marvel Snap:

It averages a Card Cost of 3.8 and a seemingly underwhelming Power of 1.3. However, we have Mister Negative, who boasts the ability to swap the power and cost of each card. In turn, all zero-power cards in your deck into zero-cost cards. This simple ability allows you to turn the tides on your opponent.

Here’s a list of all the cards in the deck and their abilities:

Abilities have different trigger conditions. Some abilities are triggered when a card is played, these are On Reveal abilities. Other cards have abilities that are Ongoing, which means that they are endless and will continue to affect the game.

Here is the role of the rest of the cards in the deck and how we plan to play each card. 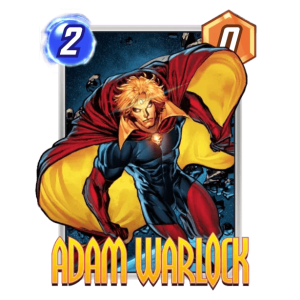 Adam Warlock’s ability allows you to draw an extra card. If you haven’t already drawn out Mister Negative or Jane Foster, Adam will help you in doing so. Normally, the more cards you have in your hand, the higher your odds of winning so having him around is always a plus. He’s unlocked by getting to Collection Level 486 and above in Pool 3. 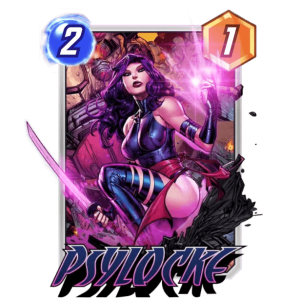 Psylocke boasts the ability to give you one extra energy on the next turn which allows you to use your more expensive cards early on. She’ll be our go-to card on the second turn and will allow us to use our heavy hitters early on. She’s unlocked by getting to Collection Level 486 and above in Pool 3. 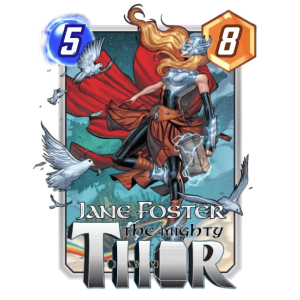 Jane Foster can draw all zero-cost cards from our deck and into our hand, making her a vital card to have. She gives us full control over the 12 cards in our deck, allowing us to dominate the final round. She’s also unlocked in Pool 3 by getting to Collection Level 486. 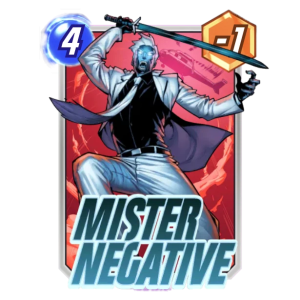 Mister Negative is the strongest card in the deck. His ability is an absolute game-changer and can decide whether or not you lose the match. Playing him as soon as you draw Jane Foster is crucial and will allow you to win. He too is unlocked by getting to Collection Level 486 and above in Pool 3. 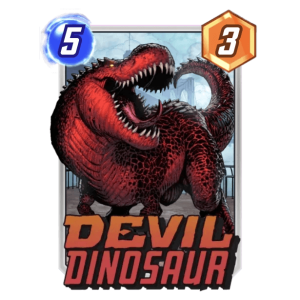 With the ability to boost the power of all cards in your hand, Devil Dinosaur manages to turn a seemingly weak card into a force to be reckoned with. Use him on the fourth or fifth turn if you haven’t drawn Jane Foster. He’s unlocked by getting to Level 18-214 in Pool 1. 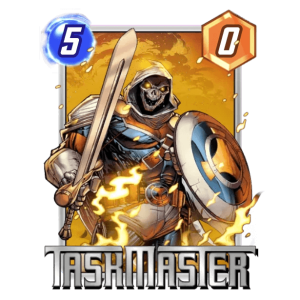 Since the Taskmaster is a zero-power card, he can be converted into a zero-cost card by Mister Negative. His ability slightly limits him as his inverted power of 5 will be lost and replaced with the power of the last played card. If he’s played after Arnim Zola, he gets a slight increase in power which is greatly appreciated. 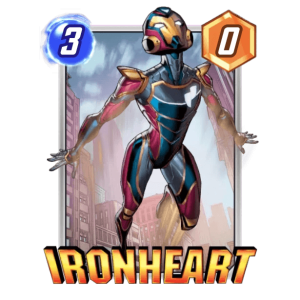 Ironheart can increase the power of 3 of your cards by random by 2 when she’s played. This allows you to buff up any card you’ve already played, making her a good addition to the team. She’s unlocked in the Recruit Season. 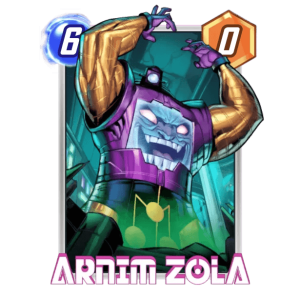 Arnim Zola is our end-game dominator. He packs a serious punch when inverted, with 6 power he is unstoppable. His ability to destroy and duplicate cards is extremely useful near the end when all you need is a little push over the finish line. Like most of the cards in the deck, he’s unlocked in Pool 3 by reaching a Collection Level of 486 and above. 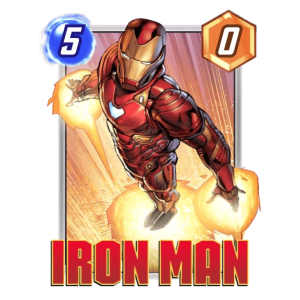 If you have 10 power at a location, Iron man can swoop in and double it for you. When inverted, he’s a costless card that brings 5 power with him. He’s capable of increasing your control at any location and giving you just enough to win. He’s one of the cards you start off with so there’s no requirement to unlock him. 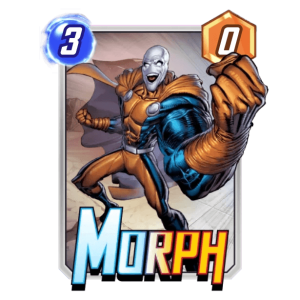 Morph is capable of turning into one of your opponent’s cards which makes him very viable for the last game. He allows you to entirely steal a card that your opponent has potentially been saving till now. He’s unlocked by progressing to Collection Level 18-214 in Pool 1. 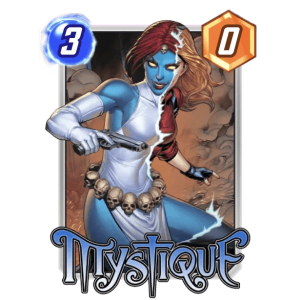 Mystique can copy the ongoing ability of any card played before her, allowing her to duplicate Devil Dinosaur’s and Iron Man’s abilities. This allows you to stack abilities together and pack a much greater punch. You can unlock her by reaching Collection Level 286 and above in Pool 3.

As mentioned before, Mister Negative plays a pivotal role in the deck. His ability to swap the costs and powers of all the cards in your deck allows you to turn all zero-power cards into zero-cost cards effectively. Pairing this with Jane Foster allows you to draw all 12 cards in one turn.

Since there are no one-cost cards in the deck, we’ll be skipping the first turn entirely. Ideally, the strategy is to first play Psylocke, who uses are On Reveal ability to give you one extra energy on the next turn. On the third turn, utilize your 4 energy by using Mister Negative.

On the fourth turn, use Mister Negative if you haven’t already, Otherwise, use Devil Dinosaur to get a buff using his ability which gives all cards in your hand a +2 power increase. On the fifth turn, we play Jane Foster. Jane will draw all zero-cost cards into our hands.

Since all our zero-power cards are now zero-cost cards, we get to draw all of our cards. Being able to control all 12 cards in your deck is a seemingly impossible feat in Marvel Snap and gives you a great advantage in most battles.

On the last turn, we have access to our complete arsenal of cards. From Adam Warlock to Mystique, you can throw whoever you want. Jane also manages to draw Mjolnir, giving you the ability to buff Thor. With Mjolnir in hand, Thor has 10 power and is practically unstoppable.

If things don’t go as planned and you don’t have Jane Foster in your hand by the fourth turn. Play Mister Negative. Cards like Arnim Zola and Taskmaster can still carry you to victory without having to use Jane Foster. Using Morph can also help in tricky situations as it lets you utilize a card the opponent has in his hand. If you are lucky, the card can be just the thing you need to win the fight.

In case you don’t draw Mister Negative. Use Thor and get a Mjolnir in your deck. Use Ironheart to buff the rest of your cards, and wait till you draw Jane Foster or Mjolnir. Do anything you can to get Mjolnir to Thor and get him up to +10 power. Devil Dinosaur can be used after Psylocke to increase your hand’s power early on and get a competitive advantage over your opponent.

Thor is a strong card that is very viable in most decks. He provides an opportunity for new strategies to be used, especially in his pairing with Jane Foster. He opens the deck up for experimentation and creates interesting new decks. Therefore, any deck built around him and supporting him will be, in effect, strong and viable in competitive play.