Overwatch’s “Battle for Olympus” event has launched to a collective sigh from Overwatch players all over. An unbalanced exercise in frustration with an equally frustrating series of challenges that are as “grindy” as they are unrewarding.

Over the years, Overwatch has had a ton of unique seasonal events that lets players go through unique styles of gameplay. From playing makeshift Volleyball as Lucio to having snowball fights as Mei.

Seasonal events are always one of the highlights of the Overwatch experience, especially as they bring unique character-specific cosmetics such as new Highlight intros, legendary and epic skins for various characters as well as new emotes and victory poses.

The Battle for Olympus event puts 7 unique heroes in a Free-for-all Deathmatch while giving each hero unique ultimate abilities. For example, Widowmaker’s ultimate can now petrify enemies that are directly looking at her, giving her easy headshots.

While it sounds good on paper, the 7-hero roster that’s available feels poorly thought out for such an event. Making playing as many of the heroes to be a hyper-frustrating experience.

However, that’s nothing compared to how bad the challenges are. Especially as most of them require the player to get 300 individual kills with all 7 heroes each.

As such, players have started to call “Battle for Olympus” the worst event in the history of Overwatch.

The Battle for Olympus event has been dubbed the "worst event in Overwatch history".#Overwatch2 pic.twitter.com/yHuwnr9MLA

This has led many players to simply cheat alongside other players and farm the challenges instead of getting them the way they’re intended.

Everyone agreed to farm the ridiculous challenges of Olympus from Overwatch

What further adds insult to injury is the free legendary skin available in the event. Instead of any of the new skins available for the event, players will get an old Mercy Legendary skin as a reward for completing 6 challenges from this event.

Players are understandably angry at this, notably, pro-Overwatch player Seagull also talked about Blizzard’s recent practices on his stream.

Players on Twitter have also expressed disappointment at the Battle of Olympus event. With many of them echoing similar concerns.

This event is probably the worst event i've ever seen in Overwatch. The rewards aren't worth the struggle and the event itself is severely underwhelming. This game man… pic.twitter.com/sG72KRj5QM

The highlights of the Battle for Olympus event are its newly added 7 skins. 6 of those skins are Legendary for Widowmaker, Roadhog, Ramattra, Pharah, Lucio, and Reinhardt, while the last one is an ultra-rare Mythic skin for Junker Queen.

While 3 of the event Legendary skins can be unlocked via the paid Battle Pass. The rest are unfortunately locked behind a paywall, all of whom cost $30 each.

Overwatch’s new event continues to highlight a prevailing issue with Overwatch 2 as a whole, as the game ditches the usually fair- if at times- annoying loot box system from the previous games that let players get the skins from just playing the game normally.

On top of that, it’s also not possible to get the skins from even the game’s paid battle pass, forcing the players to buy the skins individually instead.

Hopefully, it’s something we can expect to be improved upon as Overwatch 2 continues to get new seasonal content. 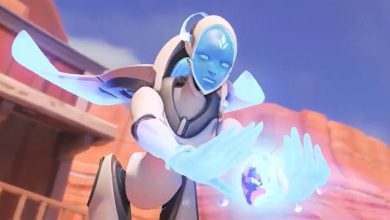