Just like how we did it in our previous guides, we are going to discuss the abilities offered by Captain. In addition to this, we are going to list down some items that we think are well suited for the character.

How To Unlock Captain in Risk of Rain 2

As we mentioned above, you need to finish the game to unlock captain in Risk of Rain 2. This means that you must defeat the final boss of the game, Mithrix. To challenge him, you will need to first arrive at the Sky Meadows. If you’re not looking for a challenge and want to get things done quickly, then we will suggest you choose the easiest difficulty and play with your favorite survivor.

After you defeat Mithrix, you will need to escape from the scene and rush back to the entrance. You will have a total of four minutes to reach the entrance, so it will be wise to focus solely on running while avoiding any kind of fight. After you reach your destination, you will get on board a ship which will lead to the final cutscene of the game.

Now that we have covered the unlocking part, let’s move on to the abilities offered by Captain.

This is Captain’s Primary ability. This fires a spread of 8 shots that deal 120% damage each. The best part is that the spread will reduce if you charge the attack for a longer period of time. The only downside about this ability is the damage fall off, which starts at 25m and ends at 60m. After this, the total amount of damage it deals reduces by 50%. In addition to this, if the attack becomes a Critical Hit, then all 8 pellets will serve as a Critical Hit.

This ability lets Captain fire a tazer that deals 100% damage. Now, the amount of damage it deals is low compared to the other attacks offered by the character. However, the primary use of this ability is linked with its shock effect. When an enemy gets hit by the tazer, it remains in a shock for a few seconds. This gives you enough time to take them down using some other attack.

Easily the best ability offered by Captain, Orbital Probe allows him to call down 3 Orbital Strikes from his ship in the sky and each strike deals a massive 1000% damage. The ability has a cooldown of 11s, so you should use it only when needed. Orbital Probe is mainly used to take down bosses, but can also help you take down a small group of enemies quickly.

By using his Special ability, Captain can call down a permanent Supply Beacon. You can only request a beacon twice per stage, and there are a total of four beacons to choose from. Two of them are available by default, while the remaining two must be unlocked by completing different challenges.

Unlike most of the characters in the game, Captain only has a single alternate ability.

This is Captain’s Alternate Utility ability and it is easily one of the most powerful abilities in the entire game. It allows Captain to call down a Kinetic Strike from the Sky which deals 40,000% damage. Even your allies will get damaged if they end up being within the attack’s radius. The ability has a cooldown of 40s and is enough to take down even the toughest of opponents. To unlock it, you must complete the “Captain: Smushed” challenge. In this, you will need to kill the final boss of the game using a Supply Beacon.

Best Items for Captain in Risk of Rain 2

Captain may seem like a powerful character but you still need to use the right items so that he can reach his full potential. We are going to list five items in our Risk of Rain 2 Captain guide that we think are perfect for this character.

Some players often complain about mobility issues with Captain. But by using this item, you can overcome them. If you jump while sprinting, then this item will boost you forward by 10m.

As you can see above, both of Captain’s Utility abilities are extremely powerful. As for the Hardlight Afterburner, it can provide you with two additional charges for both of them. In addition to this, it will also reduce the cooldown of the Utility abilities by 33%.

Sticky Bomb is yet another great item for Captain. If you’re looking for something that can help you deal some extra damage, then this item is for you. It sticks on to an enemy and explodes, dealing 180% damage in the process.

This is another item that can help you improve the mobility of Captain. When used, it will increase your movement speed by 30%. It works outside of combat only and can help you reach your destination quickly.

The final item we would like to suggest for Captain is Bandolier. Almost all abilities of Captain have a high cooldown, and this item gives you an 18% chance to reset the cooldown of all of them. How cool is that?

This was all regarding our Risk of Rain 2 Captain guide. Overall, he is one of the strongest characters in the entire game. Unlocking him might seem like a lengthy process, but it will be worth it. Before you leave, make sure to check out our guides for Bandit and MUL-T as well. 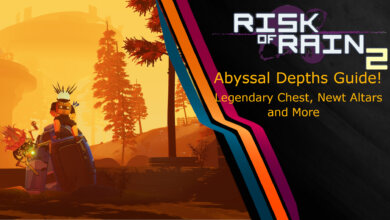