Out of all the survivors in Risk of Rain 2, Commando is the weakest one. This is because his abilities are not unique and powerful compared to the abilities offered by other survivors. Still, there can be times when you will need to play with Commando to complete certain challenges. To help you get familiar with this survivor, we’ll mention everything important related to him in our Risk of Rain 2 Commando guide.

How To Unlock Commando in Risk of Rain 2

Commando is the starting survivor in Risk of Rain 2 and is unlocked by default when you first launch the game. Therefore, you don’t need to worry about spending any time unlocking him.

Commando offers a total of four abilities. Just like Huntress, he does not has a Passive ability.

This ability allows Commando to shoot an enemy rapidly. He shoots a total of 6 bullets per second, and they deal 100% damage. The biggest downside about this ability is the massive damage falloff. It begins at 25m and ends at 60m, where you’ll lose 50% of the bullet’s damage. Therefore, you must always stay close to your enemy if you want to deal the most damage.

Phase Round lets Commando fire a piercing bullet that does 300% damage. In addition to this, if the bullet manages to pass through an enemy, it will deal 40% more damage. This is supposed to be Commando’s main AoE attack. However, because it can be challenging to hit the enemies that are behind your main target accurately, the ability isn’t that useful.

Tactical Dive allows Commando to roll a short distance. And if he is in the air, then he receives a jetpack boost as well. It has a cooldown of 4s and can be useful at times when you’re low on health and want a quick escape from the battlefield.

This is the only ability of Commando that I find useful. When used, Commando will repeatedly fire bullets, and each bullet will deal 100% damage while inflicting stun upon enemies. In addition to this, the number of shots fired will depend upon your attack speed. Just like Double Tap, this ability also has a damage falloff, which begins at 25m and ends at 60m.

Next up in our Risk of Rain 2 Commando guide are the alternate abilities. Commando offers a total of three of them. You should unlock these abilities as soon as you can as they are better than the above ones in every way.

Phase Blast is Commando’s Secondary Alternate ability. Unlike Phase Round that can be used on multiple enemies, Phase Blast focuses on a single target. It fires two close-ranged blasts that deal 8×200% damage. However, make sure to get close to your target before using this ability. Phase Blast has a damage falloff which starts at 6m and ends at 25m. To unlock it, you must complete the Commando: Rolling Thunder challenge, which requires you to land a killing blow on an Overloading Worm.

Commando’s Alternate Utility ability is Tactical Slide, which works almost the same as Tactical Dive. However, instead of rolling, this ability allows Commando to slide a short distance. Another useful thing about it is that you can even shoot while sliding. To unlock it, you need to complete the Commando: Godspeed Challenge which requires you to fully charge the first-stage teleporter within 5 minutes.

Finally, we have his Special Alternate ability called Frag Grenade. As the name suggests, Commando can throw a grenade which will deal 700% damage. In addition to this, the ability has a cooldown of 5s, and the survivor can hold 2 grenades simultaneously. Frag Grenade can be unlocked by completing the Commando: Incorruptible challenge. In this, you will need to clear 20 stages in a single run while avoiding picking up any Lunar item.

Best Items for Commando in Risk of Rain 2

Commando relies heavily on items. If you want to transform this survivor into something powerful, then you will need to focus on item stacking. Therefore, you must choose the items that can help him perform better. We are going to mention five items in our Risk of Rain 2 Commando guide that we find useful for the survivor.

A major flaw about Commando is that he possesses no armor. This means that he can get killed quickly in combat. But if you use Leeching Seed, you won’t need to worry about armor as the item will heal you by 1 with every damage you deal with.

Commando’s Double Tap ability is his main way of dealing damage, and you will be relying on it most of the time to take down enemies. Using Soldier’s Syringe, you can increase the attack speed of the ability by 15%, which will allow you to take down enemies more quickly. This also works well with Engineer.

Backup Magazine is yet another amazing item for Commando as it adds 1 stack of your Secondary skill. If you have the Phase Blast ability unlocked, then you should definitely opt for the Backup Magazine. This is because the ability can deal a lot of damage, and having more charges will prove beneficial.

This item can help Commando clear crowds quickly. When you use it to kill an enemy, it burns all nearby enemies (within 12m) for 150% damage.

The fifth and final item we would like to suggest for Commando is Wax Quail. The survivor has a lot of mobility issues, but this item can help you overcome them. If you jump while sprinting, then this item will boost you forward by 10m. So if you want something that can help you get out of a situation quickly, then make sure to keep Wax Quail in your inventory.

This was all regarding our Risk of Rain 2 Commando guide. Other than the items mentioned above, there are many others that can add up to the survivor’s power. In any case, we will suggest you choose Commando only when you have no other option. This is because he is the weakest character in the entire game and you should make a switch whenever you unlock any other character. Before you leave, make sure to take a look at our Risk of Rain 2 Mercenary and Rex guides as well. 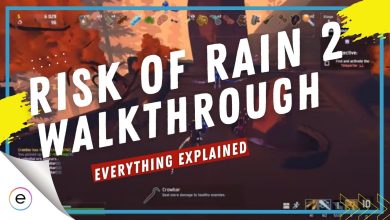