Every year, we have a handful of games that take all the fame and glory for both good reasons and bad. Resident Evil Village and It Takes Two took the center stage in 2021, Ghost Of Tsushima and Doom Eternal were titles that shook the community back in 2020, and this year, the titles with the largest significance are Elden Ring and God Of War Ragnarök.

Our Video On It

The nominees for #TheGameAwards will be revealed on Monday at 9a PT / Noon ET / 5p GMT. pic.twitter.com/Olfqo17iKf

Seeing as how the nominees will be revealed soon, I decided to make my own opinion, on how God Of War has the upper hand when it comes to competition with Elden Ring. Now both games share immense similarities in almost every aspect, but GOW seems to have an edge in many of these aspects.

Up first we have combat, and I am very conflicted when it comes to who is better. Both games feature intense combat with high learning curves. Although GOW’s combat is more streamlined and compact, Elden Ring decided to go for a large and open-ended route.

While Elden Ring has a large array of weaponry ranging from Katanas to Greatswords, to Dual-Wielding to Dragon Heads, it also has the option of builds, therefore making your character a specific build focusing on one major aspect. To me, that is an amazing concept and one which is perfected over the course of a handful of previous games.

This concept of becoming a Mage or becoming a Samurai gives the player a lot of options to play around with and ultimately allows him to grow into his specific build. Now GOW takes a different approach, it gives you 2 of its amazing weapons and tells you to master them. This coupled with Atreus makes it all the more interesting.

The Leviathan Axe is a damaging beast that focuses on taking on single enemies or enemies of a larger scale. It can also be thrown and recalled, which may be one of the most satisfying mechanics in any game.

The Blades Of Chaos are much different but of the exact nature. This weapon is a crowd controller and can keep multiple enemies at bay. Although it is not advisable against solo enemies, it has quicker moves and a burn effect that can do devastating damage.

Looking at both of these titles side by side, we can clearly see that these are different sides of the same coin, and every player may pick accordingly to their taste, but for my money, ill have to give this point to Elden Ring with its extensive libraries of weapons, magic, and character builds.

I personally put story over everything else, and of course, gameplay matters just as much, but people tend to remember a striking story more than its gameplay. It is for reasons like these that games like The Stanley Parable: Ultra Deluxe and BioShock left such an impact on players.

When it comes to this base, I give this GOW wholeheartedly because it goes for a story more emotional, and one someone can understand without watching tons of lore videos.

Without any spoilers, the story and climax of the new God Of War is something to behold, and one I won’t soon forget. From the dynamics between characters to the arching climax, it is always pushing towards the next best thing. Unfortunately, Elden Ring has a more open approach to its story.

Before going into the blunder that Elden Ring is, my favorite type of storytelling is the one Dark Souls adopted all those years ago. Unfortunately, Elden Ring took that to such a confusing extent and mixed it with so many other side plots that the player loses focus of the actual plot of the game, that is to become the Elden Lord.

I’m sure that half of the people who ended Elden Ring probably didn’t even know what was going on. We just slayed random beasts and sick-looking bosses, with minor pushes to the main objective. Now I am aware that this was the intended approach, but I loved the overall lore of the game, but I was also forced to seek out these story moments’ hidden moments by hunting vague dialogue and spending hours reading the descriptions of every item. Now I enjoyed all this, but it got dull real quick.

Now everyone here will have conflicting emotions as to which title gave me a more enjoyable open-world experience in terms of Scenery, Imagery, Map design, and how easy it was to traverse it. Up first we have Elden Ring, which was the first for any souls-borne game to enter into a complete open-world system, and wow it had its moments.

Although Elden Ring had much less hand-holding experience, GOW decided to move on to a more linear-based open world, where exploration is key, but not necessary. Seeing as how beautiful the realms of GOW are and how each one has different puzzle mechanics, it makes each area a joy to explore.

Undoubtedly this section goes to God Of War for delivering to a major extent in both beauty, detail, and traversal. Yes, Elden Ring added Torrent, but GOW added an open world much more enjoyable, in both exploring and beauty.

But these are not the only aspects of the game, difficulty managing, resource systems, and overall lore are just some of the many comparisons, but the most important ones have been done and dusted.

Although the title for Game Of The Year is yet to be stated, we can expect GOW to take the victory without breaking a single sweat. Which game do you think might win? Let us know in the comments below! 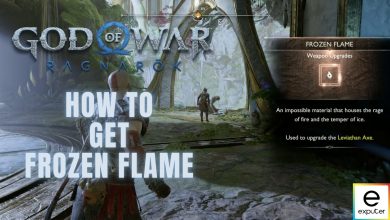