Lost Ark is an action role-playing video game and has gained a cult following with multiple awards to its name already. The fact which makes this game so good is it offers players to explore in the open world, especially when we are traveling on the mount because you will be traveling between quests and dungeons; therefore, mounts will allow you to travel faster. While you’re at it, why not go through our Best Crews and Best Hunting Spots in Lost Ark guides.

What Are Mounts In Lost Ark

It is not easy to get mounts in Lost Ark or choose which one to get because there are multiple types of mounts and multiple ways to get them. Most of them can be purchased, so everybody would like to invest in the right choice. To make this whole thing easy, we have drafted this guide which entails all the information you need to know about mounts, free mounts, and the best mounts in Lost Ark.

How To Get Mounts

As I mentioned earlier, there are multiple ways to get mounts. Some can be acquired for free by progressing in the game and completing the quests by killing the mobs, which will increase the percentage of your progress in the game, and as your percentage increases, you can unlock the mounts for free and if you want to complete the whole story with ease then consider reading our Lost Ark Leveling Guide.

Because certain kinds of mounts can be unlocked for a certain percentage; for instance, you need 30% progress to get Raptor, or you get the mount as a reward for something. On the subject of gaining rewards, why not read our Lost Ark Rapport guide and learn about NPCs, Gifts & Rewards in the game.

There are also mounts that you have to purchase with the game’s currency. There is a whole separate option in the menu to navigate and obtain the mount after meeting the given requirements. Check out in images given below.

Speed is the most important feature of every mount because it makes minutes’ distance into seconds possible and saves plenty of time. Every mount varies in speed in which he moves, and the fastest mounts are those which dodge very far and have a fast rate of cool down.

Let’s look at some of the fastest mounts of Lost Ark in the following images with must-read captions. While mentioning about the mounts also check our guide on Top 8 Best Ships In Lost Ark.

The above image showcases the Lost Ark Cerberus Mount, and it has possibly the longest dodge in all Lost Ark mounts, which means it goes farthest than any other mount in the game, which makes him a strong contender in the race of fastest mounts and Lost Ark best mounts.

The main reason for being him so fast is that it has a double dodge. Now let me tell you it’s a weak link; the Cerberus takes 12 seconds to cool down, which is too much, which means after the dodge, it will be slow for 12 seconds. Let’s see where other mounts stand in this competition in the following list.

The Tiger is another Mount with a very impressive dodge. It comes only second to Cerberus in terms of distance, how farthest their dodge is. The mount is also the main contender in the race of Lost Ark Fastest Mounts.

However, there are some other differences that are very important to mention as we are comparing them.  Cerberus dodges two times in only one attempt, and on the other hand, Tiger does that only once. But still, it has decent speed but is far behind Cerberus only thing in which Tiger is quicker is it takes 10 seconds while Cerberus takes 12, but other than that, Cerberus is superior to the Tiger.

Another one to challenge the Tiger and Cerberus is the cloud. It is tiny in size if we compare it with the rest of the two, but it has many reasons to give them a tough time because of its quality dodge, which is not far behind the Tiger, and that is significant if we compare the size of two.

However, the reason that makes a cloud look tall is its capacity to cool down in a very short time. Speaking of capacity and skills. To know more about capacity and skills try reading our Lost Ark Best Trading Skills guide and learn about the Stats & Tips in the game.

While Cerberus has the farthest dodge reach due to its double jump ability, and Tiger has the second furthest dodge, slightly higher than Cloud. However, if we talk about Cloud, maybe it has a shorter dodge than the other two, but it only takes 5 seconds to cool down, which is half what the other two take.

That means that half of the time, Cloud can dodge again, and that is something most players regard as the best mount in Lost Ark. In our opinion, Cloud is also the fastest mount you can get in the game.

It is really fun to use Raptor as a mount because everybody is a fan of the Jurassic Park movie franchise and curious about the existence of dinosaurs. So having Raptor as the mount is like a bonus; plus, it is nicely built and looks really real, and the player enjoys controlling it with decent speed, so Raptor is one must-try mount on our list. As I mentioned earlier, you can acquire this mount by progressing the story to 30 percent. Check out the image of Raptor below and see what it looks like in the game.

After the basic level where you have a horse as a mount, The Frost Wolf is the first one you get. It is a very decent mount; it moves fast and has a very good dodge with great looks like some kind of royal animal. Therefore it is in our top seven must-try mounts list. We have attached its image below:

When you finish Rohendal main story, you will get Evening Glow Chamkuri Mount. This mount can not be dismantled or destructible. It is unique of its kind because there aren’t many games that have Chamkuri as amount just as Raptor, and it has fairly impressive speed, no weakness, and it looks very adorable, and they are available in different colors. Therefore we have added this mount to our top seven must-try mounts. Check out its image below.

You can get Turtle Mount for free by completing a five-part questline. It is located on Turtle Island. This is another unique kind of mount like others on the list. The way game developers made turtle as something which can be used as a mount is simply unbelievable; therefore, we have added it to our top seven must-try mounts. Check out its image below.

It is probably the most well-made and decorated mount in Lost Ark. It is fully armored with black and blue colors, and it also has wings which makes this mount adorable it is located in East Luterra, and you have to make an effort to get this mount. With all the mount’s features, they forced us to make it part of the list. Check Out its image below.

This is an exceptional mount in the shape of a Tiger. There are two colors available for it. This mount is a really special one; it roars like a real tiger as we have experience controlling the king of the jungle. It is really energetic, runs fast, and eats there, for it is on our list of top seven must-try mounts. You can get this mount by reaching Ark Pass by pushing the progress and collecting rewards up to the Tenth level.

Lost Ark Hoverboard Mounts are two types of mounts Apostel Hoverboard and Neugier Hoverboard. These are made up like jets difference is that these fly on a hard surface; their physical shape is like jets. You can travel on them by standing on top of them.

Neugier Hoverboard is easy to get, while Apostel Hoverboard requires effort, such as 50 percent progress in the story is required and a few others as well. These are very different kinds of Mounts than any of those I previously discussed in this guide. Check out the image of Lost Ark Hoverboard Mounts below. 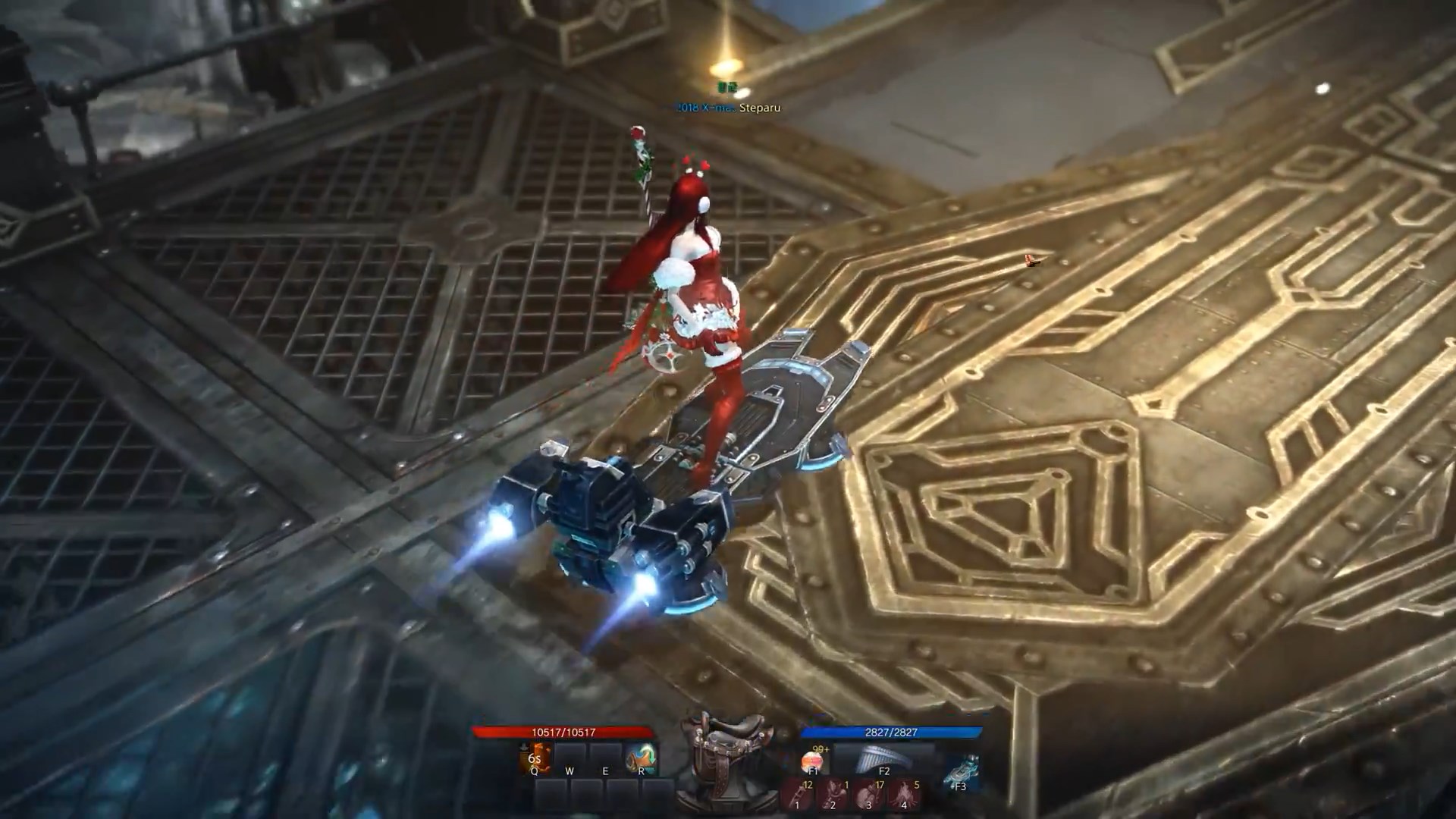 The mounts in Lost Ark are an interesting feature that players get to use in order to escape and visit the open world at faster pacing. Our list of the fastest and best mounts in Lost Ark entails some of the top-tier mounts you should at least try once before moving on to your favorite ones in the game.

This wraps up our Lost Ark Mounts. What do you think about it? Let us know more of your thoughts in the comments section below.