Lost Ark features an ever-evolving and expanding ecosystem with a fair variety of trade skills which comprises Fishing, Hunting, Foraging, Logging, Excavating, and Mining. When it comes to progression, Foraging is an essential trade skill for your character. It revolves around gathering flowers, plants, and mushrooms via a Foraging Tool to craft potions, making it a core trade skill you have to master as soon as possible! So let’s check some of the best places to level up foraging in Lost Ark where you can level this trade skill really fast and more! While you’re at it, consider reading our Best Card Sets In Lost Ark guide.

Lost Ark is on the rise of becoming the most popular MMO-RPGs to come out in the last couple of years and will remain to be that way in the coming years due to its engaging combat, superb content to-do, and a Loyal fanbase that is growing day by day Both in the Asia and the West.

How To Unlock Foraging In Lost Ark

Foraging is one of the different Trading skills that can be easily unlocked by completing the series of Tutorial quests beginning with the quest “Crown of Lakebar” in “Lakebar Village”. This is a pretty early area accessed at the beginning of the game; most players will want to visit these quests before they tackle anything else as they generally explain the basic elements of the game, including unlocking other main Trade skills of the game like Fishing, Mining, and Excavating. These Trade skills are important and crucial to your character’s main foundations. Also, on the subject of Trade Skills, consider reading our best Mining Spots in Lost Ark guide.

The following Abilities are unlocked as you level Foraging:

The following abilities are the Mastery Skills available to Foraging. They are unlocked and upgraded as your Foraging level increases past its Mastery Level:

Best Locations To Level Up Foraging In Lost Ark

Lost ark has a massive sprawling open world to fight its many fiends or mythical beasts and collect their loot, but there are only are quite a few locations where the community of Lost Ark has managed to mark and farm various types of the flowers, herbs, and mushrooms required in abundance to level up the Foraging Trade Skill which is basically a non-combat Trade skill and therefore makes you go out of your way to Level it up.

As always, make sure to have a Foraging Tool to collect the necessary materials needed for the leveling, and now let’s take a look at the best locations in Lost Ark to level up the “Foraging Trade skill”.

One of the best very early locations to gather some fast Forager level XP is to visit the Continent of Anikka located on the East Side of the world map, here located in an area called “Delphi Township” is another sub-area called “Delphi Forest” where the farming will take place. As stated in the image above, You are looking to Follow the green-lined arrows and grab the “Wild Flowers” marked as green leaf markers spread only a few meters apart from each other in the topmost area of the map. There are mostly Tier 1 Flowers here, but there will be some rare instances of blue color-coded Tier 2 Wild Flower in here, too, so that should prove nicely for bonus XP.

There might be an extra 4th green leaf marker to grab, but we recommend grabbing only “Two” and then reloading the zone by changing your “Channels” in the top right of the minimap should be able to spawn more wildflowers for you to collect, and in total doing this for 20 minutes should almost get you a full level up at Forager levels below ten or less, making it one of the best Early game Places to level up the Foraging Trade Skill in Lost Ark. 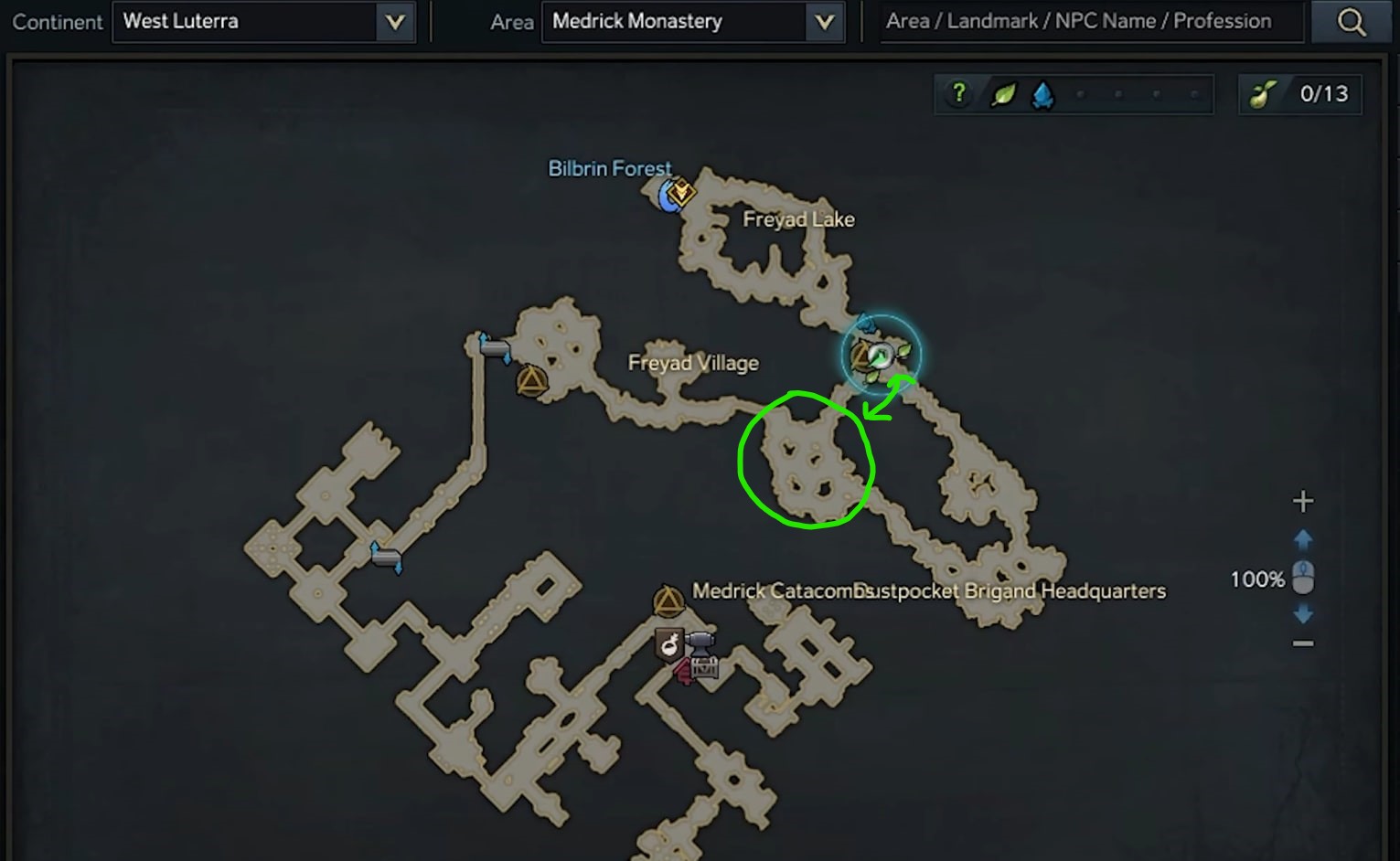 The Mendrick Monastery also serves as a fantastic Post early to the mid-game area to farm flowers needed for leveling your Forager Trade skill. It is located in the West Luterra Continent, and to the North of this area, just beside to the right of the “Freyad Village” marking, will be a small outcropping where you can collect a fair amount of flowers around the zone and the enemies here pose no danger to you so you should be able to kill them with ease while running around the small area collecting everything and then quickly refreshing the zone by swapping channels in the top right corner of the minimap as always. 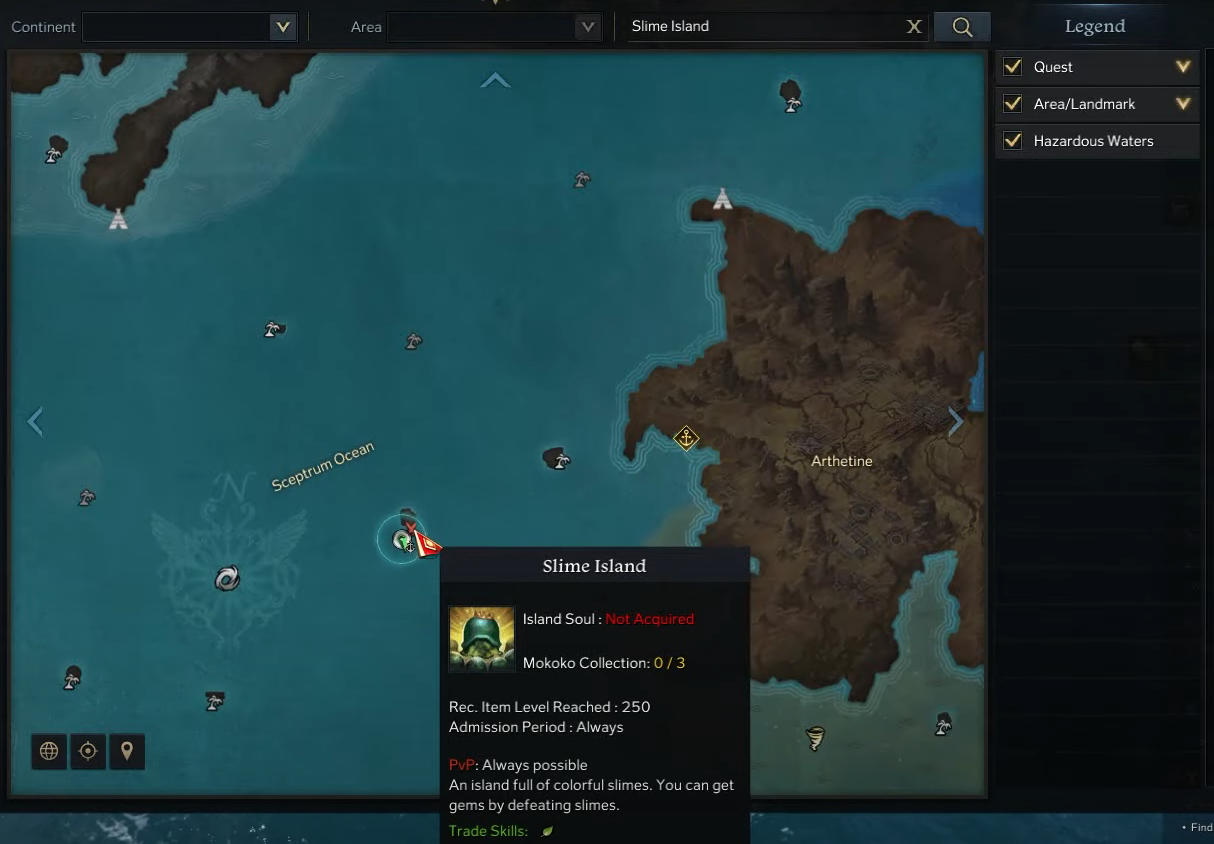 The Slime Island is one of the best locations to level up the Foraging skill in Lost Ark because of its uniqueness. We recommend being at “High levels” for this zone because there are a handful of enemies, which are mostly trash mobs in groups, but the real danger are the PVP Players who may or may not attack you.

The farming route is straightforward and pretty easy as from where you start off in the zone, you immediately have to make a quick loop of the entire island while doing your best to avoid as best as possible of the incoming Hostile PVP contestants.

It is primarily a PVP Oriented zone where other players can attack you, but there is no need to worry as the farming can be done pretty quickly, and most of the time, the other players will not attack you as, by that time, you will have quickly farmed most of the flowers and mushrooms on this island leaving you to quickly exit and in and out by cycling through your Channels to reload the zone.

If you are looking to tackle this zone for farming in late-game, then you might be interested in our character builds that will help you against fighting off these strong players from other worlds! This includes many of our favorite DPS classes ranging from the Deadly Deathblade to the Dexterous Gunslinger, and even the Slick Sharpshooter will all prove viable to help you dish out optimal damage in both PVE and PVP.

Located just off the far East of where you first start sailing your ship from “East Luterra” and just South between Tortoyk and Anikka is a really popular location to farm Forager Trade Skill XP called Lullaby Island. What makes this area the Lost Ark community’s favorite spot for farming is that there are No enemies to threaten you in this zone; it is fantastic for all Beginner players and many other midgame to late-game players.

There are several Mining and Logging trade skill nodes you can grab along your way of farming the Flowers and Mushrooms in this zone, so basically, you are getting THREE Trade skill level farms done for the price of doing a single farm for the Forager trade skill. So, with the variety of materials available on this land, Lullaby Island is one of the best places in Lost Ark to Level up Foraging.

And what makes this zone even better is that if it ever feels overpopulated or lacking in Trade skill nodes, You can always reload the zone by changing your channel in the top right of the Minimap to a channel with fewer players inhabiting the server.

Although we’ve gone through most of the popular and well-known areas to farm the Forager/Herbalist Trade skill in Lost Ark, there are a few other ways to boost the materials if needed.

In order to yield more materials and more Forager skill trade XP from skill trade nodes, you can try crafting an Adept Foraging tool with the necessary materials needed for it, and the recipe to craft it can be easily purchased from one of the Visiting Merchants found in your strongholds during most of the times.

There are potions in the game known as “Minor life energy potion” and “Weekly trade potion pack,” which, when bought and used, will drastically improve the workload to manage and farm more Skill trade nodes in the world. These will drastically improve your efficiency to farm for nodes in most of the areas for longer periods of time while making you reap better rewards for just a small price to pay that you can earn back fairly soon enough.

That’s all about our best places to level up foraging; with its help, you would be able to level up your foraging trade skill effectively. If you have any questions feel free to ask them in the comments below.

Next: Best Ships In Lost Ark